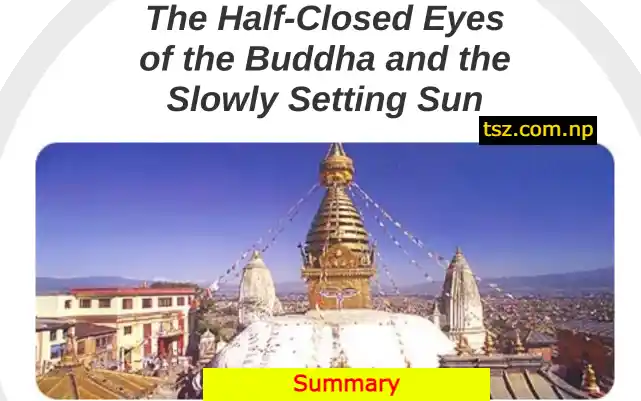 Also Visit:
The Half-closed Eyes of the Buddha and the Slowly Sinking Sun Exercise

Main Characters of this story

The plot of the Story

Summary of the Story

The story entitled ' The Half-closed Eyes of the Buddha and the Slowly Sinking Sun' deals with the monologues of two characters a tourist guide in Kathmandu valley and a foreign tourist. The story is different from conventional stories and, instead of showing actions and events, the story records what the two characters think in a stream of consciousness technique. The two major characters of this story are a western tourist and a Nepali tourist guide.

The tourist is a confident woman, who claims to be an expert in knowing Nepal thoroughly, even more than the guide. She is well-versed in Nepalese history, having read many books about it.

There is an opening scene in which a tourist describes the view of a green valley in Kathmandu. Having grown up surrounded by plains, mountains, and the sea, she enjoys this place for its natural scent and tranquillity.

The Buddha's half-closed eyes of Swoyabhu Temple make her feel at ease. She also states the East's various contributions, such as antique tools and writings written on palm leaves or on copperplate inscriptions from antiquity. Then, the guide tells her how people were able to settle in Kathmandu Valley as a result of Manjushri's sword blow at Chobhar. As well, she discusses different types of food, such as momo. She recalls a grandmother telling her grandson the story of Brikuti while smoking hookah.

The second part of the story is about the guide's feelings. On Chobhar Hill, Manjushri slashed it open with his sword to let the water out, he tells the story of Chobhar Hill's history.

On their way back, they stop in front of a house to show her what life is really like. She'd never seen anything like it, and he wanted to show it to her. Polio had completely paralyzed the body of that child. No physical activity is possible for him. The child's gaze is compared to the samyak gaze. According to him, it's a trait only found in Easterners: the ability to remain silent and immobile for long periods of time without complaining.

The guide tells the child's parents that she is a doctor, which is a lie. As a result, they view her as their eldest child who has come to seek the brother's help. As a result, they become ecstatic. Their eyes are filled with intimacy, kindness, and gratitude. In addition, he demonstrates the child's healthy sister. She could do all of her Age-appropriate activities.

They can see the sparkle in the child's eyes as his mother chastises his sister. He certainly wishes he could say that dirty acts are pleasant, but he cannot. The guide thinks that the tourist's eyes welcome her and hide the end of life. They are every bit as beautiful as the setting sun's reflection in the Buddha's eyes.

Analysis of the Tourist

In the "The Half-closed Eyes of the Buddha and the Slowly Sinking Sun" story, the protagonist is a Tourist, while the major character is a Tour guide. In this story, a kid with polio is included as a minor character. This story is a little more unique since it's a conversation between a visitor and a tour guide. This story is unique since it takes the form of a dialogue between the two characters.
The location of this story is Nepal's capital city, Kathmandu. Since, It is located in Kathmandu Valley, which blends religious and cultural importance with natural beauty. The story is about Nepal and happens in Nepal. While speaking in a foreign language, the Nepali tour guide in this story is ignored by the Western tourist, who pays attention only to the guide's own description of events. It is also significant because the story draws references to figures from Hindu and Buddhist mythology and religion.
The Nepali guide is still the authoritative figure here, but, as the Western tourist says, "I could take you along your old routes. You are my tour guide for today, but I feel I can help guide you as well," the Western tourist declares, completely ignoring the fact that the Nepali guide thinks he knows a lot about the subject at hand.
The social and cultural context of this story is influenced by the characters' culture, along with where the story takes place in the globe. It looks at the role that a certain location has in establishing or broadening the cultural background of the story. To enhance readers' enjoyment, literary devices are used.

The Half-closed Eyes of the Buddha and the Slowly Sinking Sun is written in a non-traditional stream of consciousness manner. Rather of concentrating on action and occurrences, it concentrates on the feelings of two primary characters: the traveller and the tourist guide.

The tourist appears to enjoy Nepal's natural beauty. She admires the country's religious tolerance and cultural mix. She appreciates the Easterners' generosity in giving numerous things to the West. Ironically, she argues that as a foreigner, she is an expert in Nepal's history and can even teach the Nepalese guide about it.

The Buddha's half-closed eyes suggest a peaceful environment, while its reflection in the setting sun symbolises the natural beauty of Nepal that the tourist wish to enjoy. On the flip side, the guide wants to show the sorrow that exists inside the beautiful nation and the instances of poverty that exist within the rich culture.

This is also an attack on the bookie wits who think they are experts without ever having met reality. He also wants to communicate to the visitor that this is an opportunity for Westerners to restore smiles to these suffering people and to make the East more rich in every manner.

Feelings of inclusion in the story

"Being separated by a large distance brings a kind of loneliness you haven't had the chance to feel. This may be why your enclosure intrigues us." This shows the feeling of cultural boundary of own-ness of people around the world.

What are the themes of the story?

adrift (adj.): a boat moving on the water uncontrolled

multifarious (adj.): many and of various types

Shankar Lamichhane (1928-1975) was born in Kathmandu but lived in Banaras with his uncle at a young age. After receiving college education at Tri-Chandra College in Kathmandu, he took his first job at the age of twenty-two and worked for a number of governmental and cultural institutions in the capital.

In his later years, he became the manager of a handicrafts store. Lamichhane was an admirer of modern American fiction and frequently mixed with foreign visitors to Nepal. His stories are heavy with symbolism, often lacking a conventional plot and more closely resembling essays, but his prose is rich and poetic.

This story is taken from Himalayan Voices: An Introduction to Nepali Literature, translated and edited by Michael Hutt.