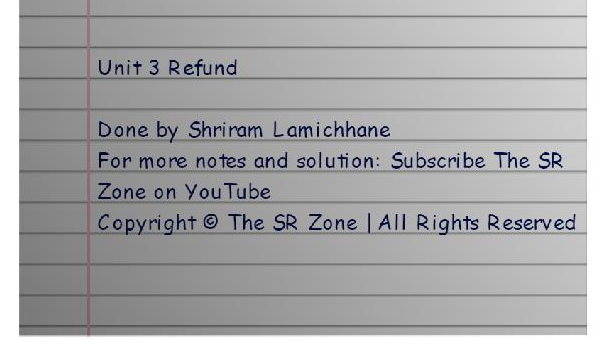 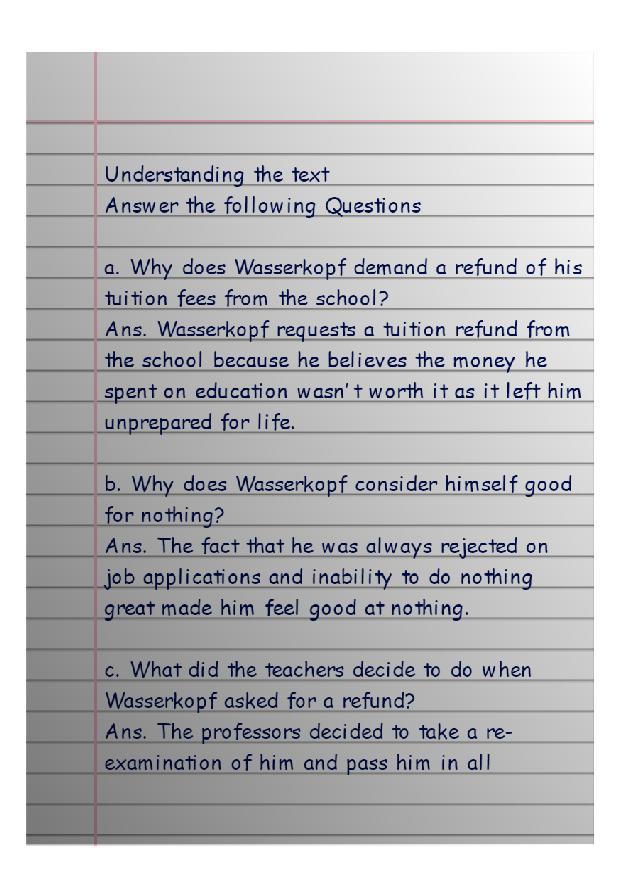 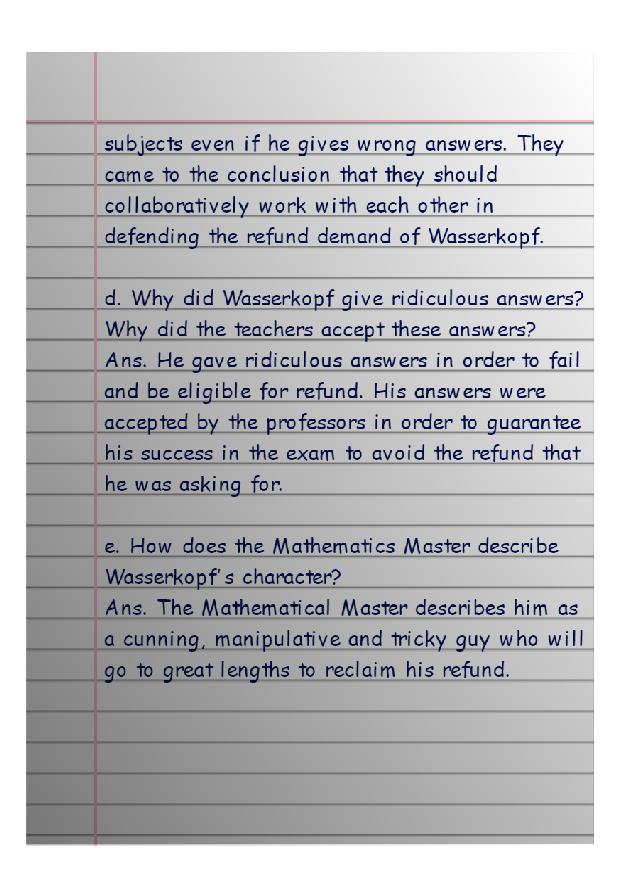 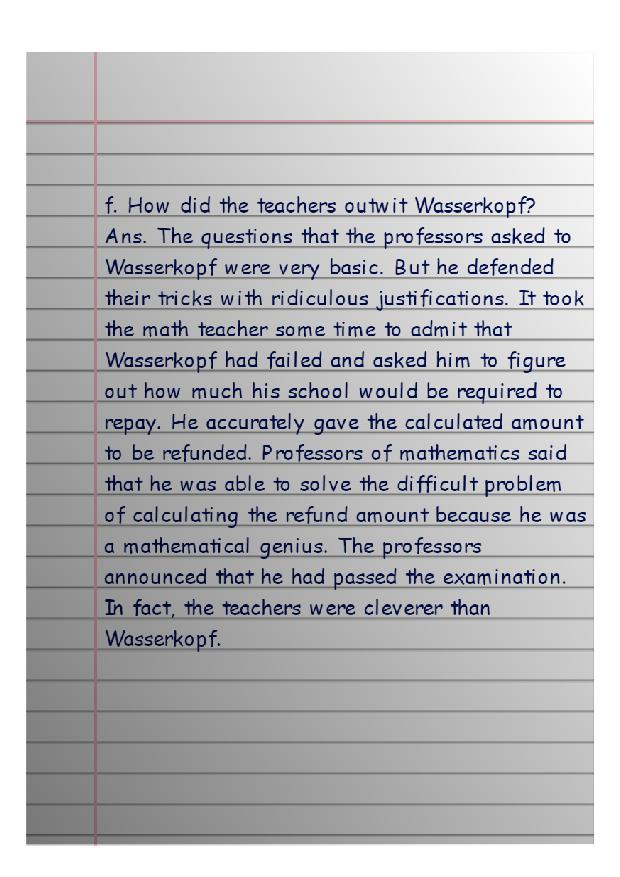 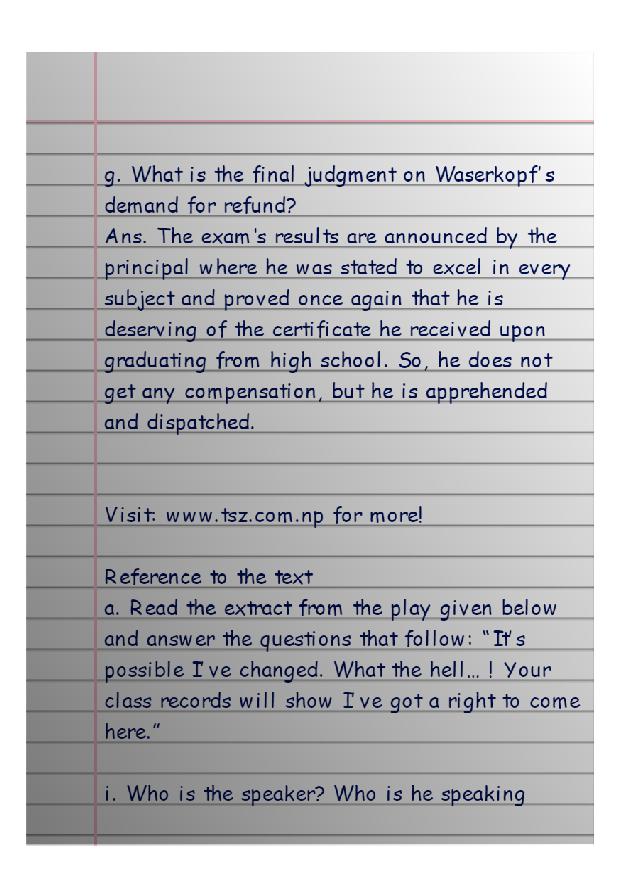 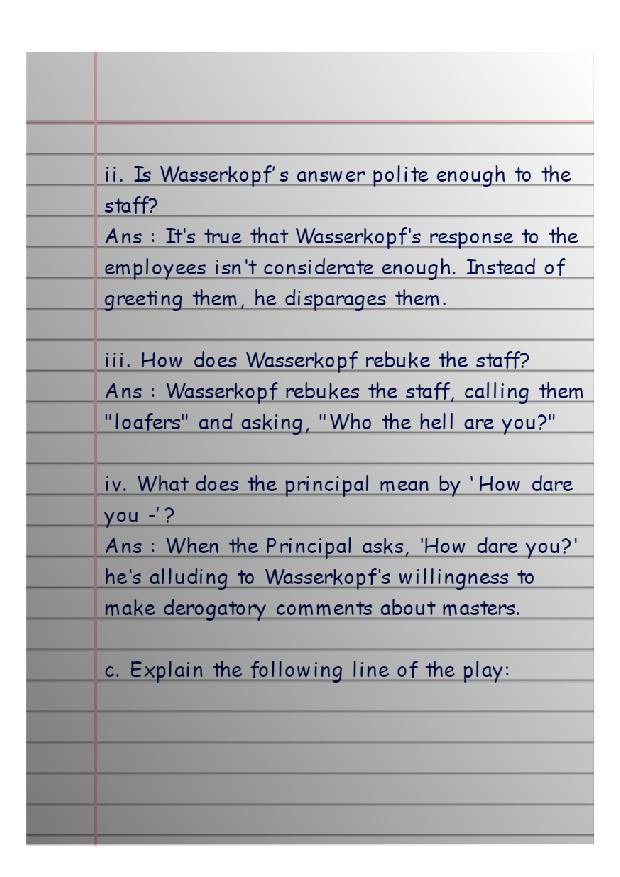 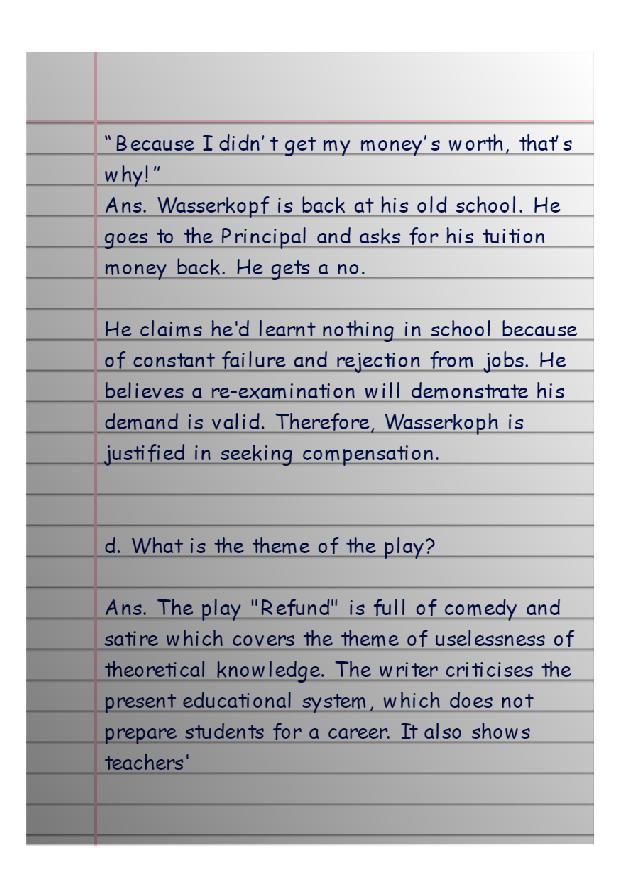 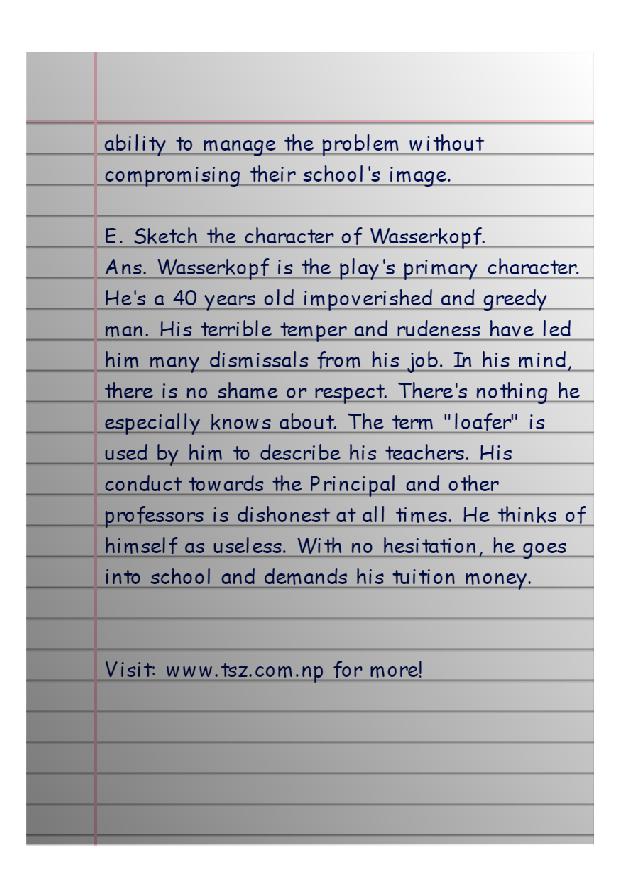 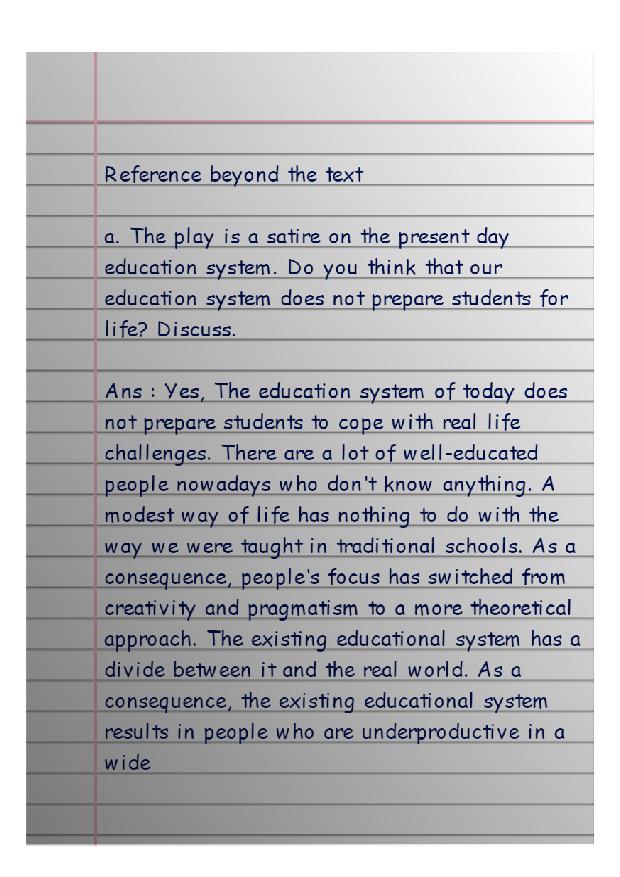 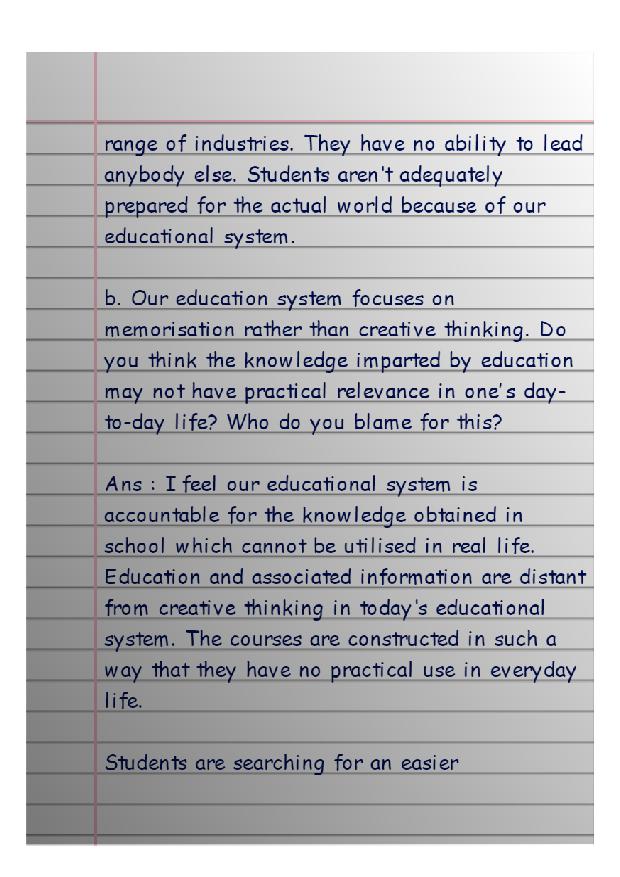 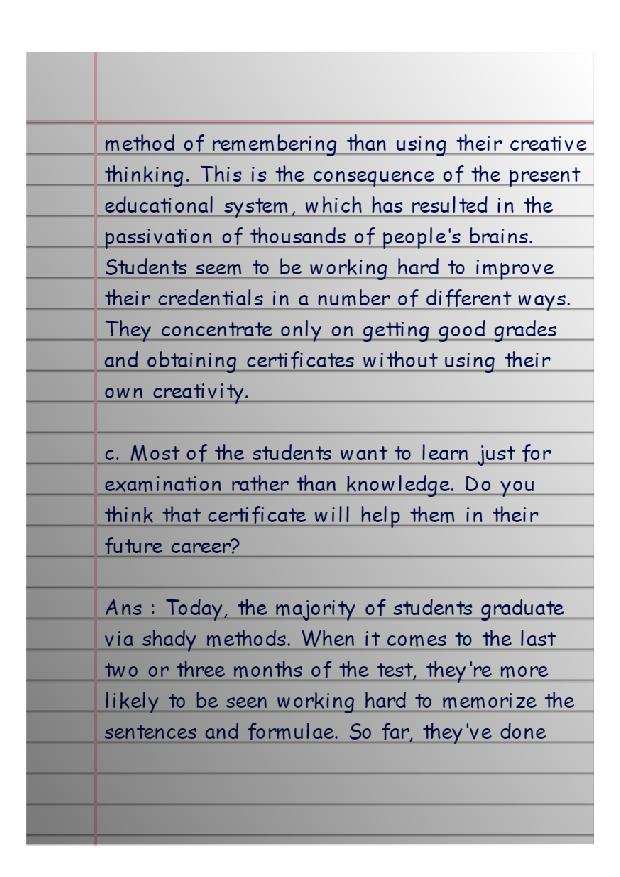 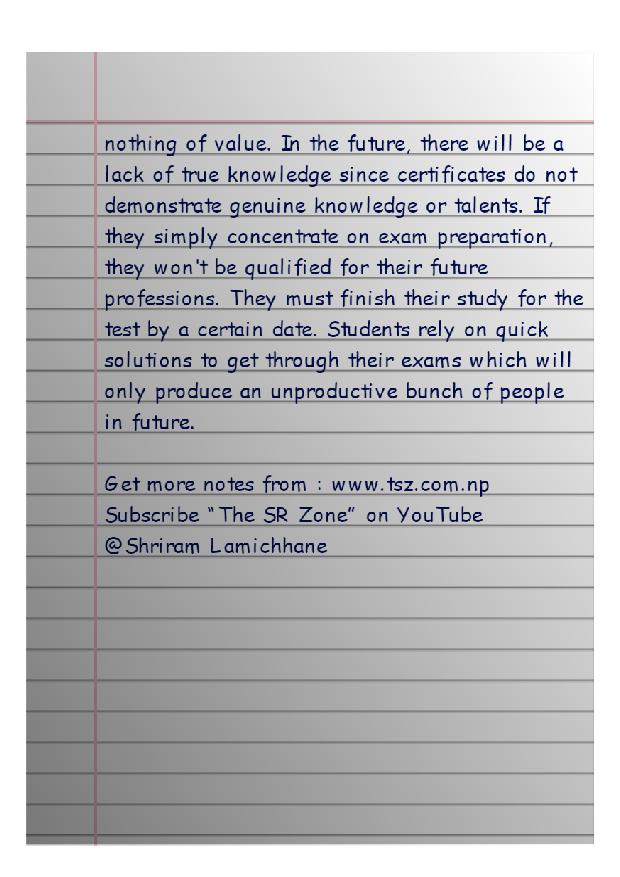 One act play, Refund, written by Fritz Krinthy is a satirical play which revolves around the story of one man named as “ Wasserkopf’. After 18-year-olds of school graduation, one day Wasserkopf shows up to seek his money back from the school and demands the principal for the refund.

He was unable to get a solid position, nor any job, was multiple times rejected from various job applications, and just passed up many opportunities as well. According to him, his school professors failed to adequately prepare him for life beyond high school.

The teachers were surprised that a student was coming in front of them asking for a refund just because he could not get a good job. When it comes to dealing with him, they promise him that he will be completely refunded only on one condition, that is if he fails the test that they will put him through. He agrees. All of his professors, Maths, Physics, Geography etc  quiz him on various topics, and he consistently provides incorrect answers. He does so because his only goal was to prove he learnt nothing. The professors, on the other hand, use various techniques to demonstrate his correctness.

At last, the math teacher finally speaks the truth and says Wasserkopf’s answer to his question is not correct. Now as a deal, teachers have to give him the refund amount. They ask him how much the refund amount is. He accurately calculates the amount and tells them. At this point, math’s teacher also claims that he passed the maths exam since he was able to calculate the amount accurately because was a mathematical genius and they had taught him well. As a result, he passes the exam and is not eligible for a refund.

a. Why does Wasserkopf demand a refund of his tuition fees from the school?
Ans. Wasserkopf requests a tuition refund from the school because he believes the money he spent on education wasn’t worth it as it left him unprepared for life.
b. Why does Wasserkopf consider himself good for nothing?
Ans. The fact that he was always rejected on job applications and inability to do nothing great made him feel good at nothing.
c. What did the teachers decide to do when Wasserkopf asked for a refund?
Ans. The professors decided to take a re-examination of him and pass him in all subjects even if he gives wrong answers. They came to the conclusion that they should collaboratively work with each other in defending the refund demand of Wasserkopf.
d. Why did Wasserkopf give ridiculous answers? Why did the teachers accept these answers?
Ans.  He gave ridiculous answers in order to fail and be eligible for refund. His answers were accepted by the professors in order to guarantee his success in the exam to avoid the refund that he was asking for.
e. How does the Mathematics Master describe Wasserkopf’s character?
Ans. The Mathematical Master describes him as a cunning, manipulative and tricky guy who will go to great lengths to reclaim his refund.
f. How did the teachers outwit Wasserkopf?
Ans. The questions that the professors asked to Wasserkopf were very basic. But he defended their tricks with ridiculous justifications. It took the math teacher some time to admit that Wasserkopf had failed and asked him to figure out how much his school would be required to repay. He accurately gave the calculated amount to be refunded. Professors of mathematics said that he was able to solve the difficult problem of calculating the refund amount because he was a mathematical genius. The professors announced that he had passed the examination. In fact, the teachers were cleverer than Wasserkopf.
g. What is the final judgment on Waserkopf’s demand for refund?
Ans. The exam's results are announced by the principal where he was stated to excel in every subject and proved once again that he is deserving of the certificate he received upon graduating from high school. So, he does not get any compensation, but he is apprehended and dispatched.