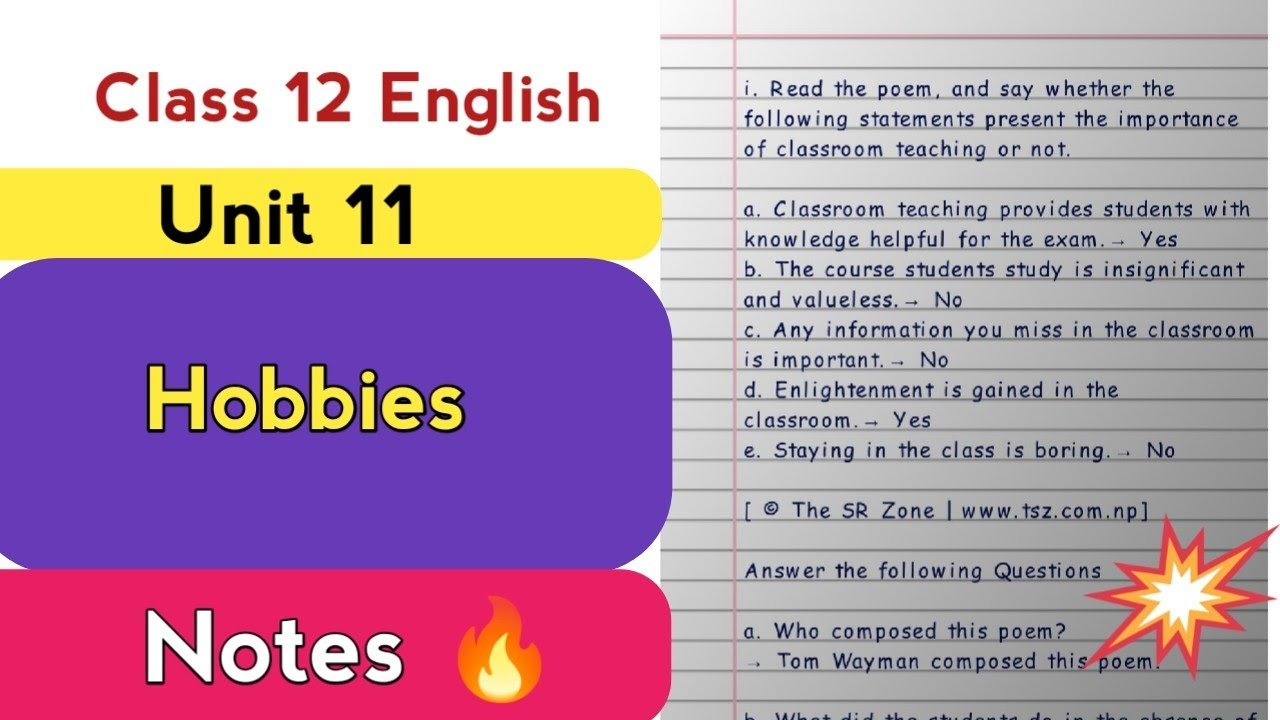 A. Find the words from the text which have the following meanings.

a. a wave-like motion = rhythm

b. to make or do something again exactly in the same way = replicate (copy)

e. the feeling of having no energy and enthusiasm = frigid

f. a state of noise, commotion and confusion = tumult

h. to regard with respect, often tinged with awe = revere

i. said in a way that is not direct, so that the real meaning is not immediately clear = inextricably

a. What is the author's favorite hobby? Why does she like it so much?

The author loves to go on walks. Body and senses are activated, and her rhythm is established because of it, so she likes it so much.

b. What sorts of roads did the writer prefer to walk on when she was very young?

When the author was a child, she chose to walk on dirt paths which were unpaved and uneven just like near her mamaghar.

C. How did walking give the author and her classmates a sense of freedom?

Being able to take shortcuts and discover new regions while walking provides the author and her classmates a feeling of independence.

d. In what ways were the roads in Kathmandu different from the ones in Sydney?

While Kathmandu's roads were dirtier, more chaotic, and less well-maintained than Sydney's, Sydney's roads were paved and well maintained.

e. How did walking help the author in the new country?

Walking gives the author a way to clear her mind and boosts her mood when she is under stress since it gives her a peaceful path to go on.

f. What were the treasures of Patersham, where the writer lived with her family?

There was a small park with few visitors and a large rock in one corner of Petersham, where the writer and her family lived.

g. What things became her permanent friends with whom she could share her feelings?

There were things that she could always talk about her feelings, like the earth, the sky, the trees, the water, and so on. These things became her long-term friends.

h. Why did she feel that she had traveled to 'a desert, to emptiness' as she went to the United States?

Due to a lack of people to share her thoughts and feelings with, she felt like she had traveled to a desert, an empty place.

i. Why did the author eventually feel that the strange city was known to her?

After a while, the author had the impression that the strange city was familiar to her because she never hesitated to enter any of the buildings or homes. As she walked around the strange city, she was positive about everything.

j. How did walking make her feel at home with different places she visited?

As she walked, she came closer and closer to places she had seen before and new things she had observed about the surroundings. It provided her a feeling of stability and self-assurance. Even when she was at home, she held onto the memories of that day.

a. Do you believe that walking helps us understand ourselves? Give reasons in support of your opinion.

Yes, I believe in it. Walking is a great way to get to know oneself better. Having a healthy brain is connected to increased cognitive performance and a better understanding of one's self through frequent walking, according to recent scientific studies.

Having a better understanding of the world around us improves our mental abilities. Walking enables us to have a better sense of the lives of the people around us. It also lowers the risk of cardiovascular disease and stroke. It helps us comprehend life in a deeper way by enhancing our mood and memory.

Traveling with others educates us about their way of life and reveals to us what really matters in life. Traveling to new areas opens one's eyes to the many sides and challenges of life.

b. Think of one of your hobbies. How does this hobby relate to your psyche and self?

The practice of yoga is one of my favorite hobbies. It is linked to my psyche and self because it allows me to relax while still being productive. Using it makes me look and feel better while also reducing stress.

Yoga reduces stress and anxiety and aids in coping with depression. It gives me a chance to better myself. It is a boon to our personality development because it makes us mentally strong and self-reliant by driving away obstacles in life and enhancing our inner creativity and hidden talents.

Yoga is a great way to unwind spiritually and mentally, as well as to improve one's physical and mental health. Preventing high blood pressure is a benefit, as well as improving one's overall health.

c. Many people turn their hobbies into careers. Is it good to turn one's hobby into a career?

Hobbies are the activities one enjoys in one's leisure time. It's no secret that many people make a living out of their hobbies and interests.

Traveling, photography, yoga, reading, fishing, handicraft, music and acting are all examples of hobbies that might lead to a career. They become well-known and wealthy on a national and worldwide scale because of their exclusive emphasis on a certain hobby.

It's a good idea to make a profession out of one's hobby because those who are passionate about their work do better. Some people thrive in photography, while others shine at singing or dancing.

Our bodies and brains benefit from hobbies because they extend our horizons, relieve stress, and refresh us after a stressful day. Because they approach their job with an open mind and do it from the heart, they have a distinct advantage in their field.

b. Change the following sentences into passive voice.

a. I want someone to love me.
I want to be loved.
b. Someone broke into our house while we were on holiday.
Our house was broken into while we were on holiday.
C. I don't like people staring at me.
I don't like being stared at.
d. Is it true that someone stole your car?
Is it true that your car was stolen?
e. The cat enjoys someone tickling him.
The cat enjoys being tickled.
f. Would Swostika open the window?
Would the window be opened by Swostika?
g. Did they confess the crime?
Was the crime confessed by them?
h. He thinks that someone is teaching Jennie.
He thinks that Jennie is being taught.
i. Sabina hates people laughing at her.
Sabina hates being laughed at.
c. Complete the following sentences as in the example.
Example : People believe that one billion defaulters are staying in the UAE.
The one billion defaulters are believed to be staying in the UAE.
a. English people think that the number thirteen is unlucky.
The number thirteen is thought to be unlucky by English people.
b. What are you wearing for the wedding?
Actually, I am having a suit made (a suit make). They will give it tomorrow.
c. The carpet in our drawing room is very dirty.
It needs to be cleaned. (clean).
d. There are rumours that the factory at the corner is manufacturing bombs.
The factory at the corner is rumoured for manufacturing bombs.
e. Some people believe that Silajit from Jumla cures all indigestion problems.
Silajit from Jumlais is believed to cure all digestion problems.
f. People claim that Changu Narayan temple is the oldest temple in Nepal.
Changu Narayan temple is claimed to be the oldest temple in Nepal.
g.
A : Your car is making a terrible noise.
B : Thank you. I am not a mechanic and I will get it repaired soon. (repair)
h. The police suspect that the criminal left the country.
The criminal is suspected to have left the country.
i. A : Where are you going?
B : I am going to the stationery store to get my document photocopied.(myl document /photocopy)
J. People allege that the corrupt leader has embezzled millions of rupees.
The leader is alleged to have embezzled millions of rupees.

Write an essay on ‘Hobbies.'

When it comes to hobbies, it's whatever you like doing in your own time. You may relax your mind and body in the most blissful way possible. A person's personality has a significant impact on their choice of hobbies. It might be both instructive and amusing.

Almost everything we do in life has the potential to turn into a hobby or an interest. It's not the only thing that can be done, though. It gives us a boost.

Making new acquaintances is easy when you have a common interest. Many hobbies may be turned into a source of income and fame. It's a good thing to have interests outside of work. It gives the brain something on which to focus.

A person's interest is reflected in their choice of a hobby. It's a win-win situation for both of us. A person's tastes vary. So, there are a lot of different things going on.

Stamp collecting is a hobby for some people. They are not the only ones interested in coins from different countries and periods. Photographion is a passion for some people, as is painting, music, keeping birds or other pets, or participating in sports, but avarice is what motivates others.

In a nutshell, we must have a hobby which is beneficial for us and everybody.