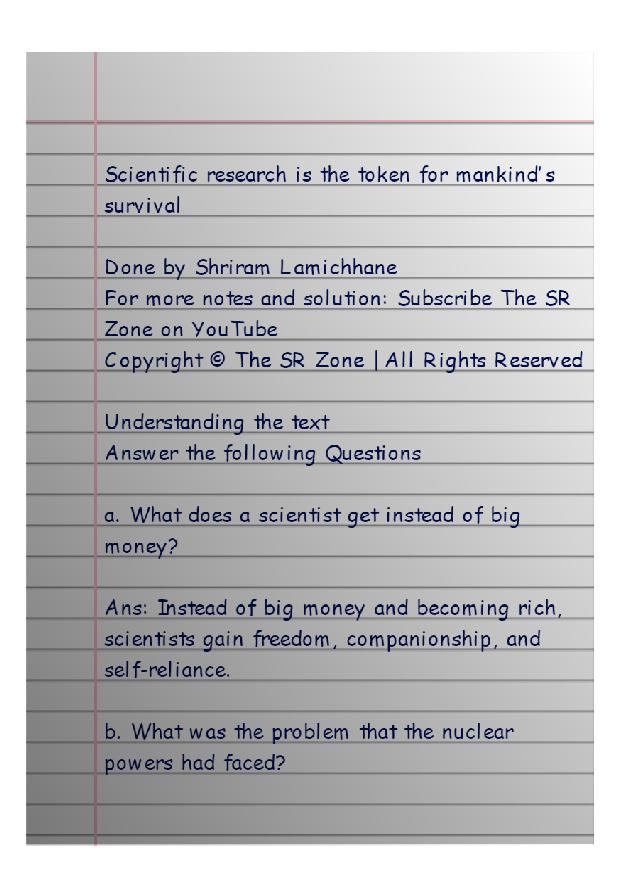 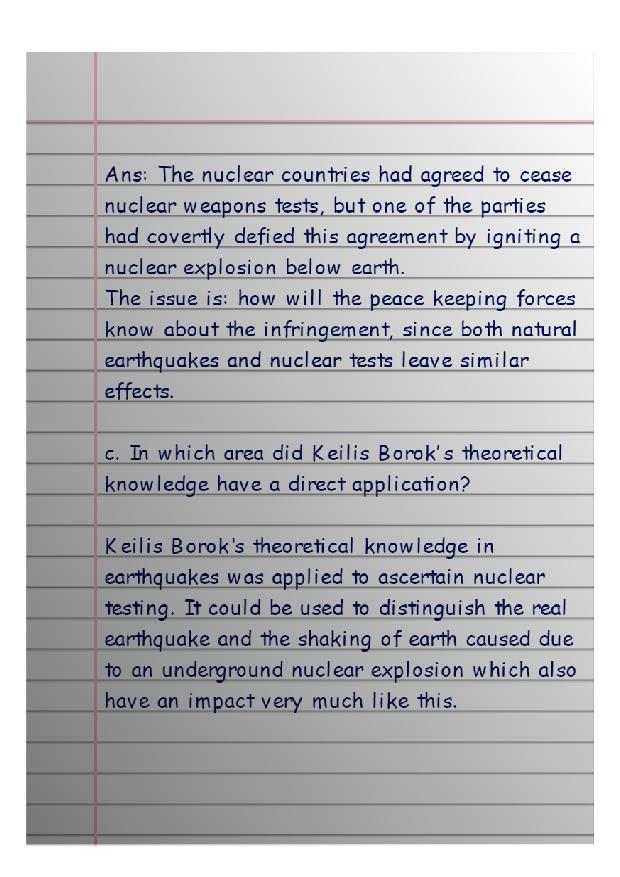 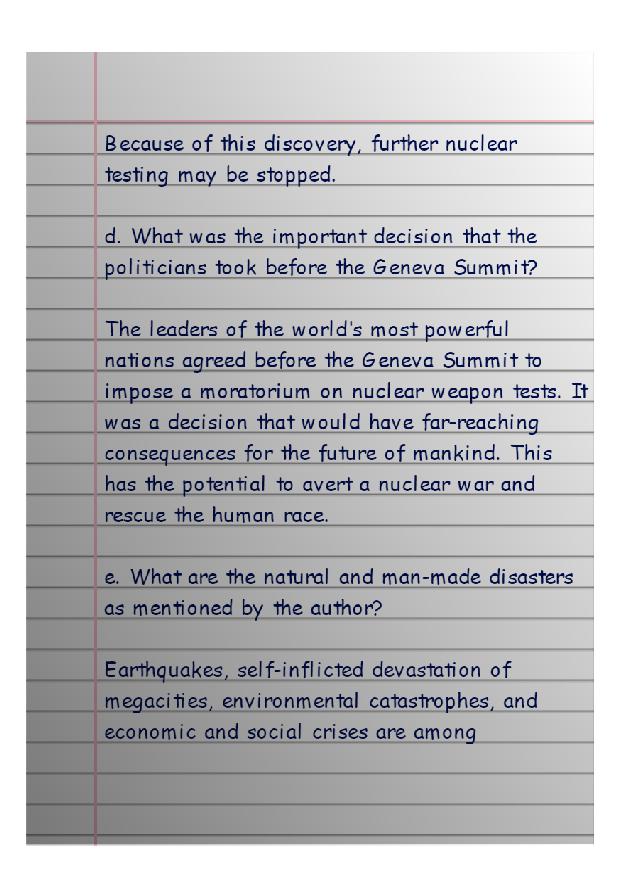 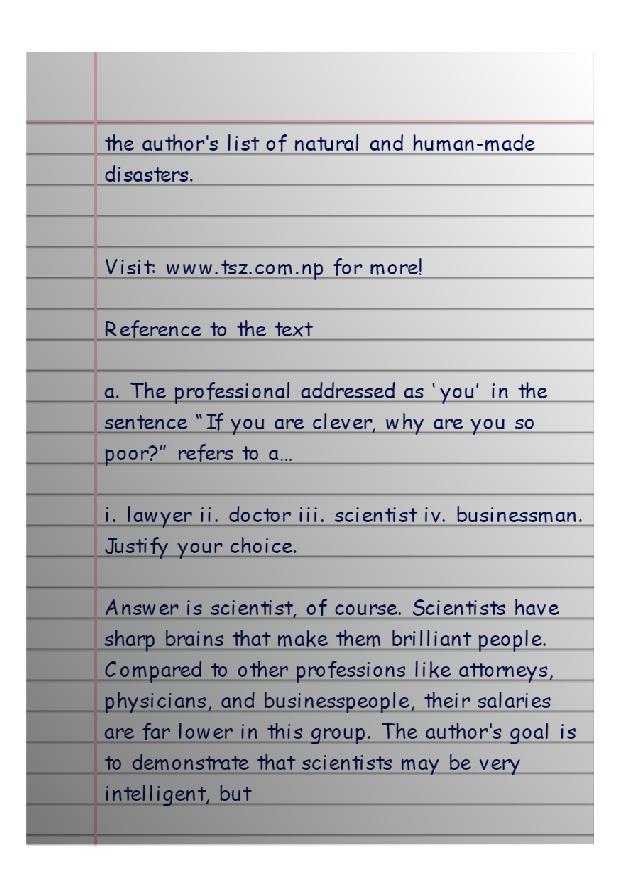 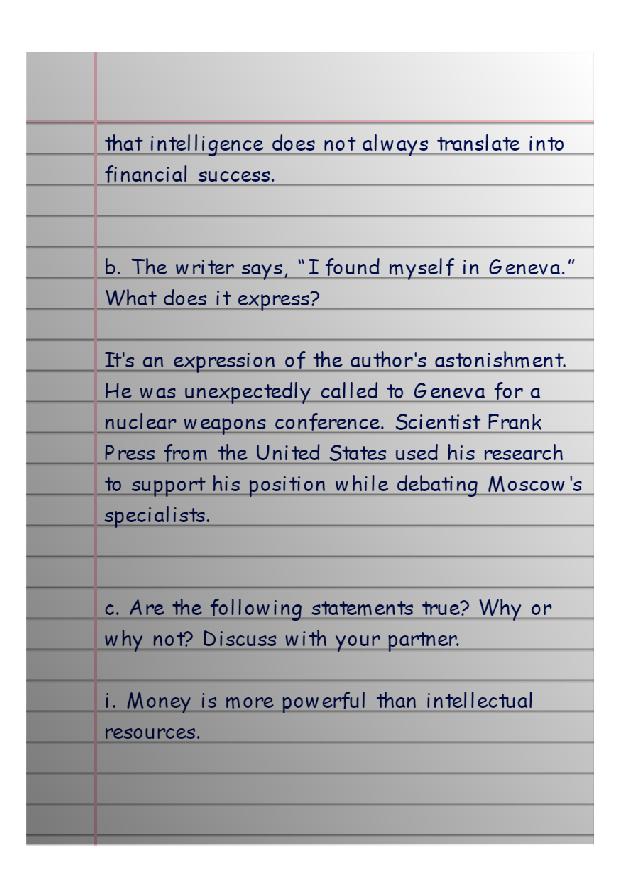 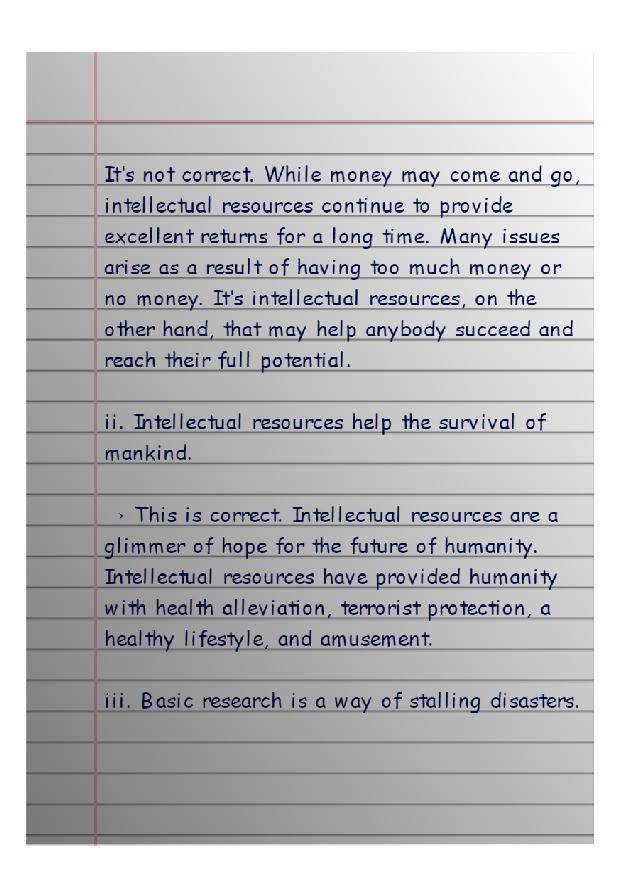 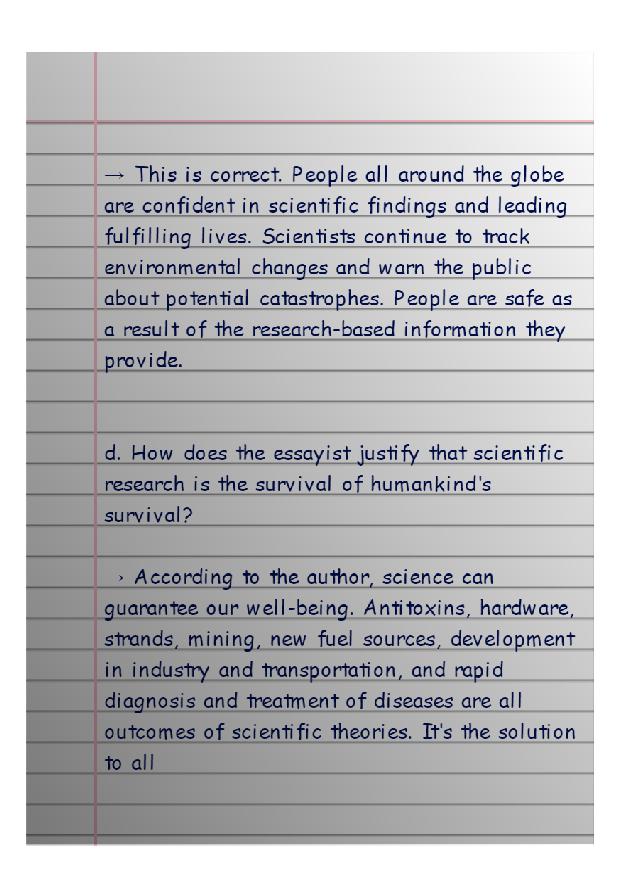 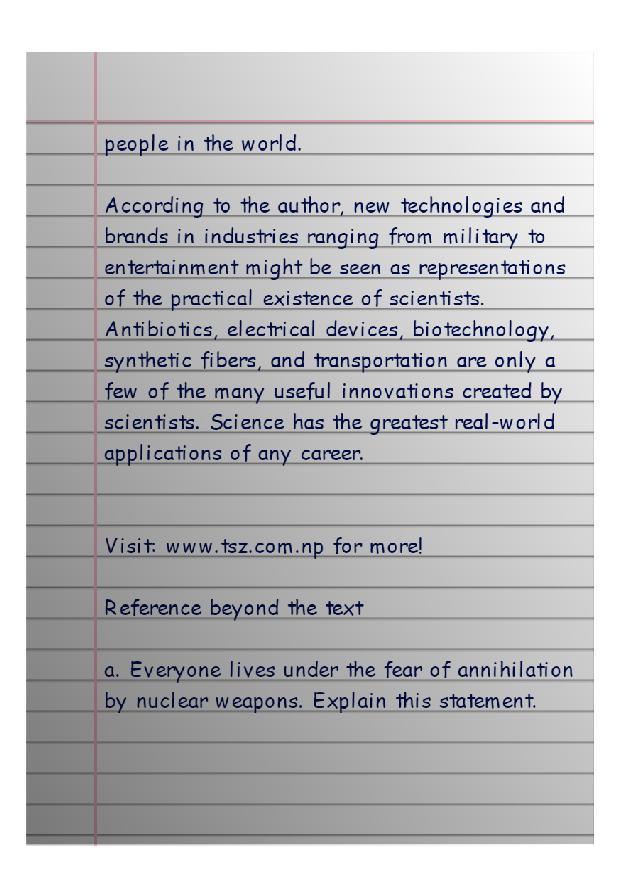 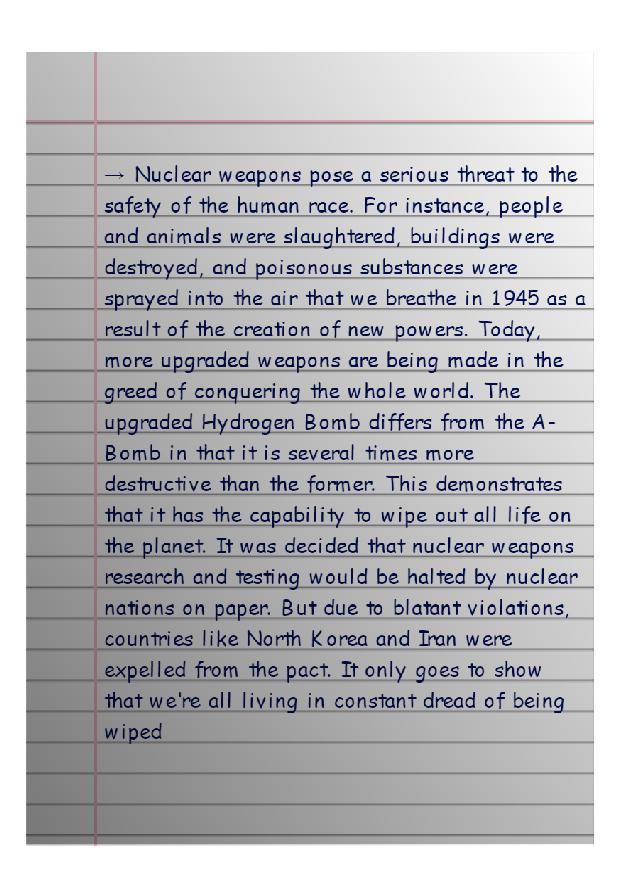 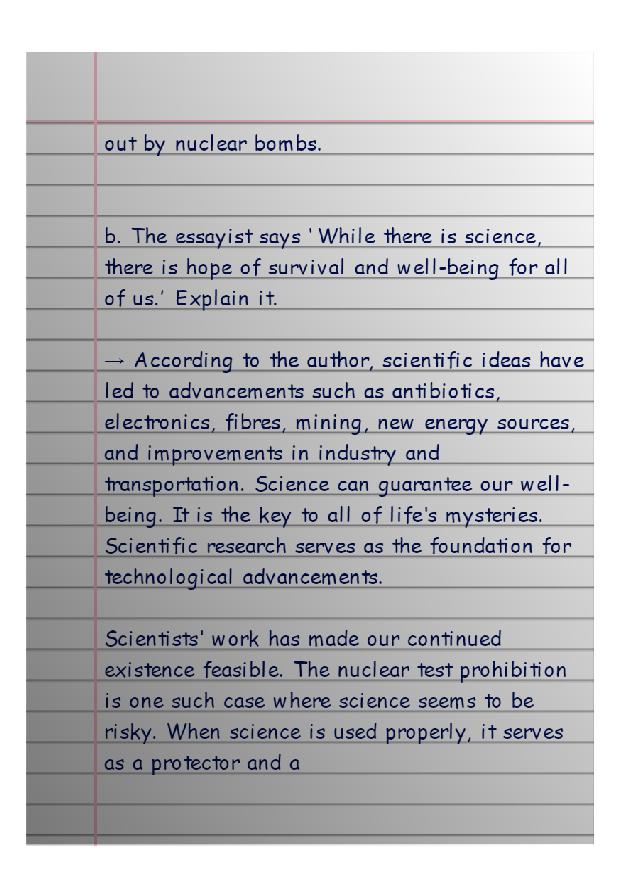 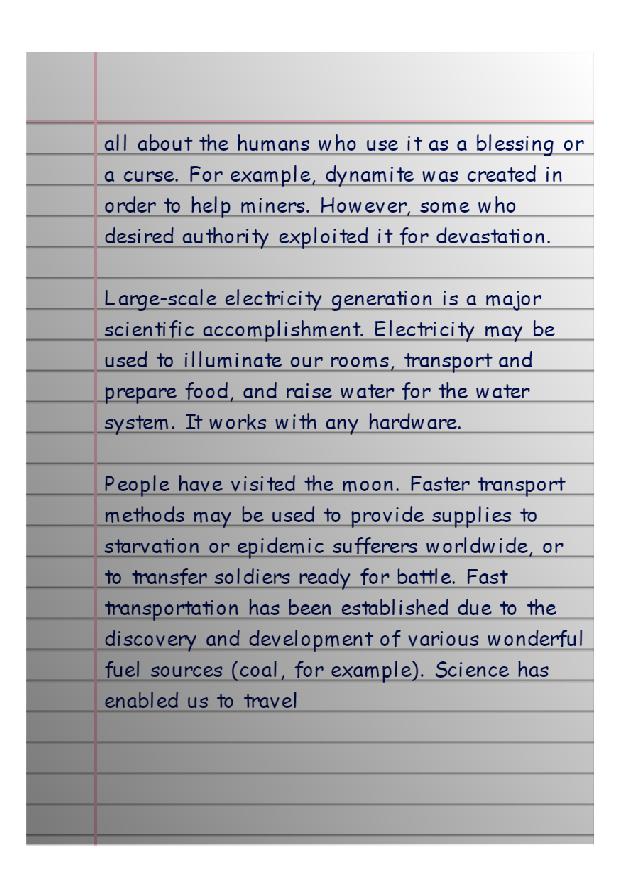 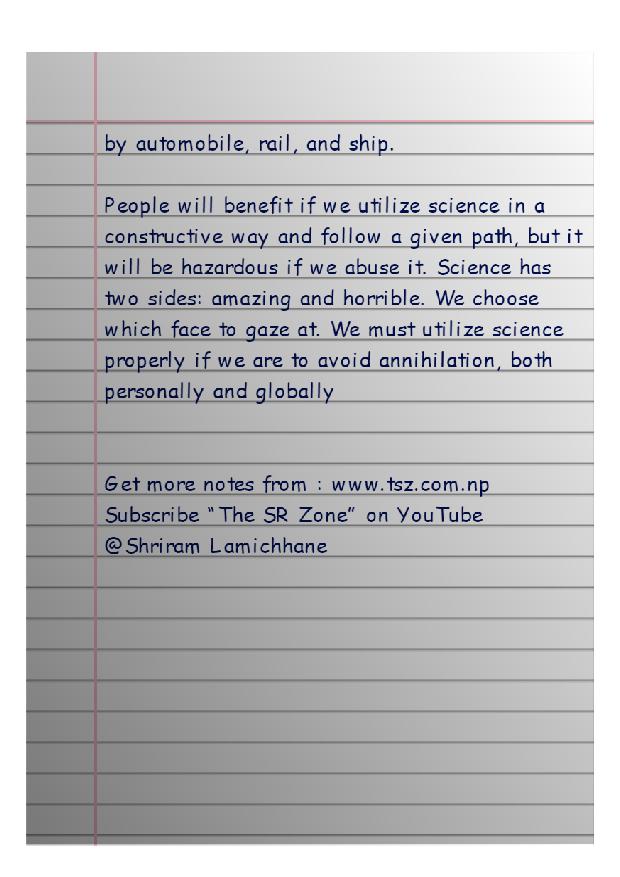 Scientific Research is the token for mankind’s survival Summary

Russian scientist Vladimir Keilis-Borok wrote an essay entitled "Scientific Research is a Token of Humankind's Survival" who views science as a vital defender and caretaker for mankind. In this essay, the author has discussed the value of science and its innovations to human well-being.

According to the article, despite the lower pay than businessmen, attorneys, and doctors, some people choose to be scientists. This means that curiosity is what motivates people to get into science. Researchers don't get a lot of money; they get a lot of freedom, company, and autonomy instead.

A scientist is dedicated to making improvements to the human condition at any costs. The greatest gift mankind has ever received, according to the author, is the work of scientists and scientific discoveries. He uses an example from his own life about the Geneva Summit where they made an agreement to ban nuclear weapon testing.

Almost everyone in the world was under nuclear danger as a result of the cold war. The nuclear arsenals of the Soviet Union, the United States, and the United Kingdom were sufficient to wipe out the whole earth.

Nuclear weapons testing were to be banned if an agreement could be reached between the three nations with nuclear arsenals. However, the accord had flaws. Initially, the nuclear-armed states had agreed to stop conducting new nuclear weapons tests, but a second nuclear explosion had been secretly conducted by one of them. But how would the other powers be able to tell if anything is wrong? A team of technical experts was assembled to deal with the problem.

Seismic wave theory, according to the author, is crucial to solve this problem. Vibrations similar to earthquakes were produced by underground nuclear explosions. His theoretical understanding was immediately put to use to identify the difference between normal tremors and tremors caused by an explosion in the context of human survival

One of the most important decisions taken during the Cold War by scientists from all over the world, regardless of political ideology, ethnicity, origin, and nation, was the imposition of a moratorium on nuclear tests.

While some people think science and common sense can't coexist, the author believes the opposite. Scientists' work has resulted in new businesses and technologies ranging from the military to entertainment. Everything from antibiotics to synthetic fabrics to the green revolution to genetic forensic diagnosis was made possible by scientists.

Although money is considered more important, the author believes that intellectual resources, such as scientific research and creativity, hold the promise and responsibility for breaking the stalemate. He believes that both natural and human-made disasters like earthquakes, megacities, inter conflicts, environmental catastrophes, and economic and social problems have the potential to kill a million people or more while wreaking havoc on the global economy.

Finally, the author asserts that human survival depends on scientific research.Science is the only way to stop such dangers which threaten the very survival of civilization. It's up to scientists and their tools to keep us safe. Science may be a human's greatest friend and protector if used properly. Science, according to the author, gives us all a chance at long-term survival and happiness.

Scientific Research is the token for mankind’s survival Questions Answers

a. What does a scientist get instead of big money?
Ans: Instead of big money and becoming rich, scientists gain freedom, companionship, and self-reliance.
b. What was the problem that the nuclear powers had faced?
Ans: The nuclear countries had agreed to cease nuclear weapons tests, but one of the parties had covertly defied this agreement by igniting a nuclear explosion below earth.
The issue is: how will the peace keeping forces know about the infringement, since both natural earthquakes and nuclear tests leave similar effects.
c. In which area did Keilis Borok’s theoretical knowledge have a direct application?
Keilis Borok's theoretical knowledge in earthquakes was applied to ascertain nuclear testing. It could be used to distinguish the real earthquake and the shaking of earth caused due to an underground nuclear explosion which also have an impact very much like this. Because of this discovery, further nuclear testing may be stopped.
d. What was the important decision that the politicians took before the Geneva Summit?
The leaders of the world's most powerful nations agreed before the Geneva Summit to impose a moratorium on nuclear weapon tests. It was a decision that would have far-reaching consequences for the future of mankind. This has the potential to avert a nuclear war and rescue the human race.
e. What are the natural and man-made disasters as mentioned by the author?
Earthquakes, self-inflicted devastation of megacities, environmental catastrophes, and economic and social crises are among the author's list of natural and human-made disasters.