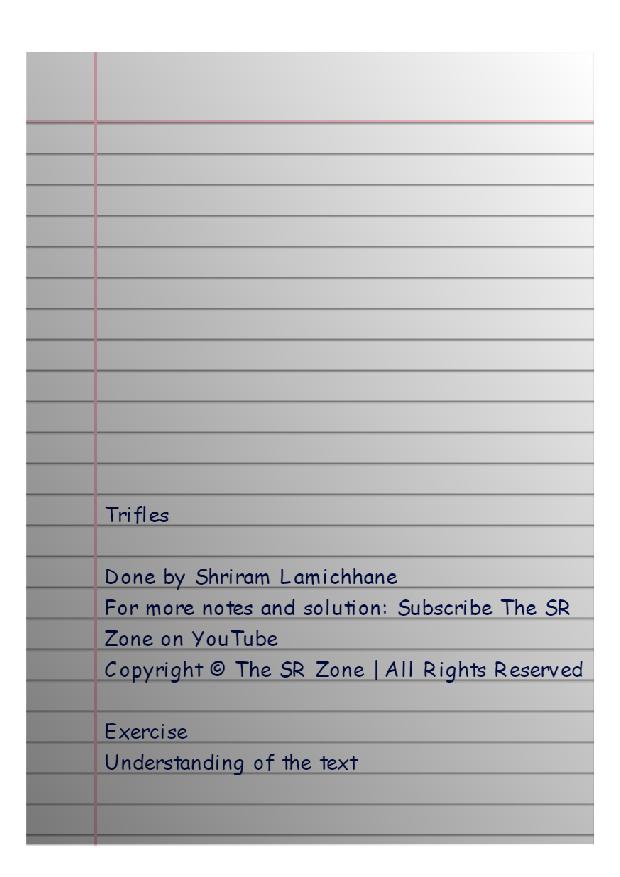 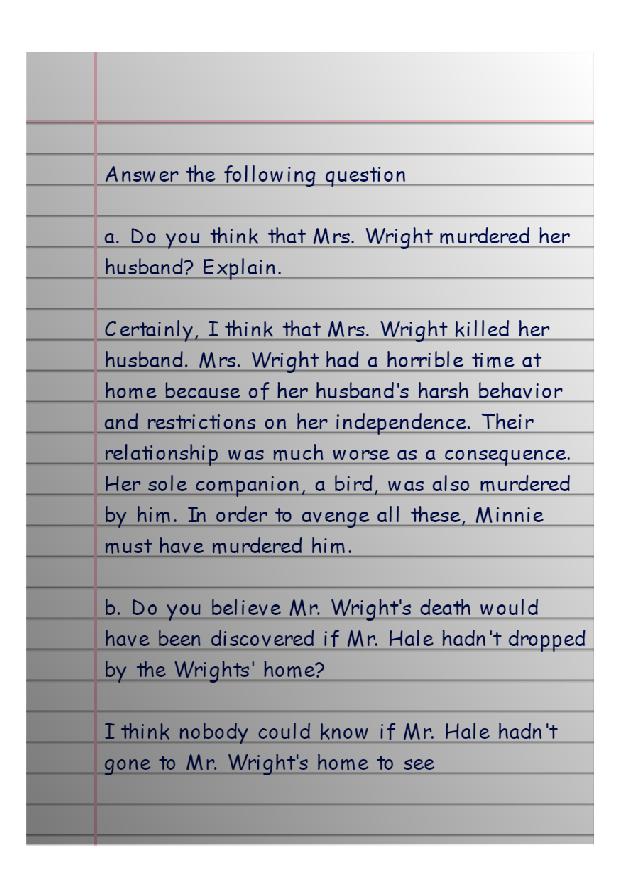 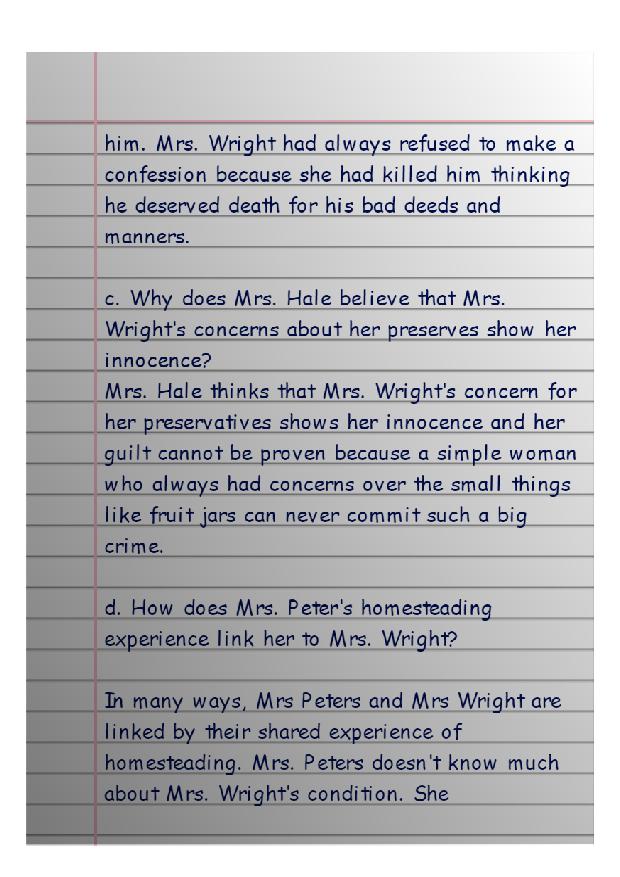 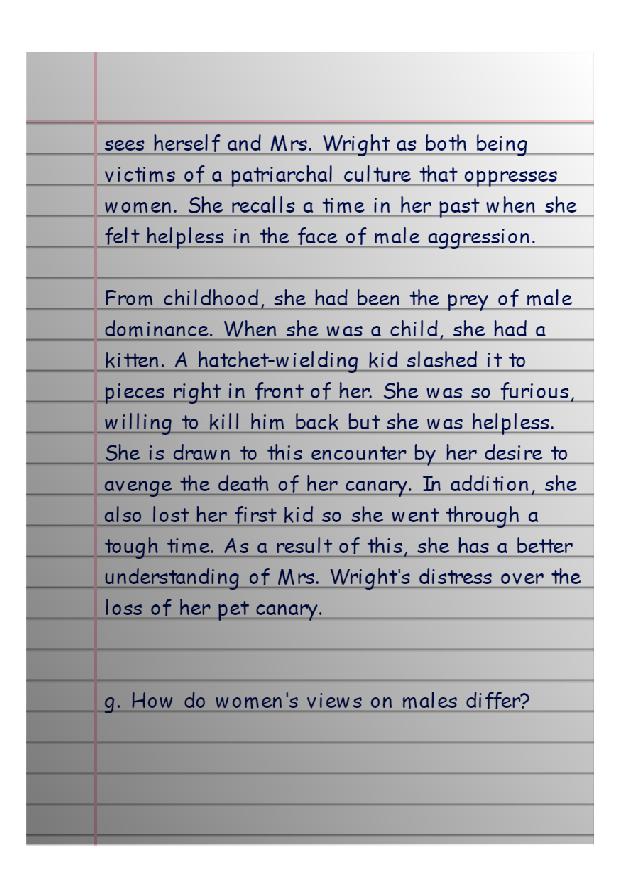 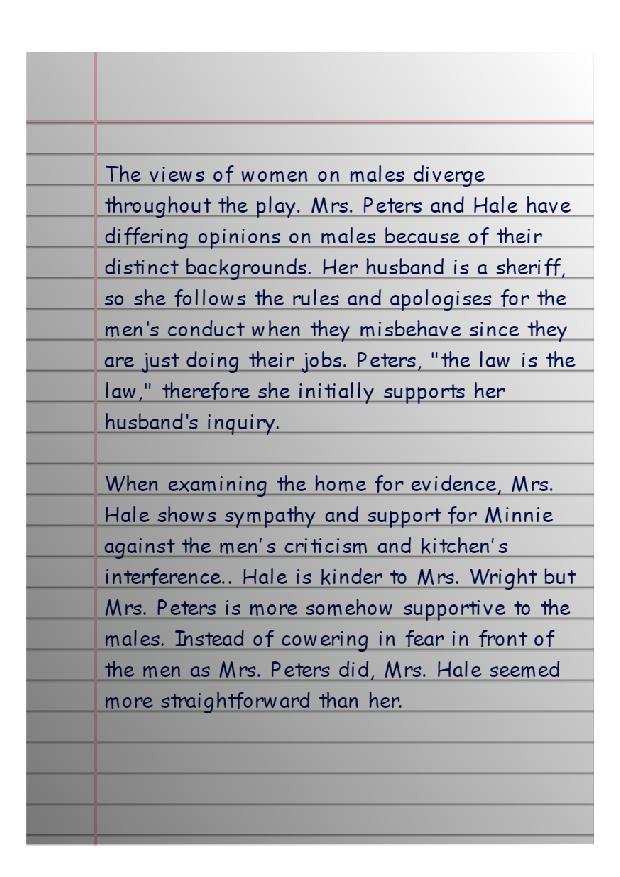 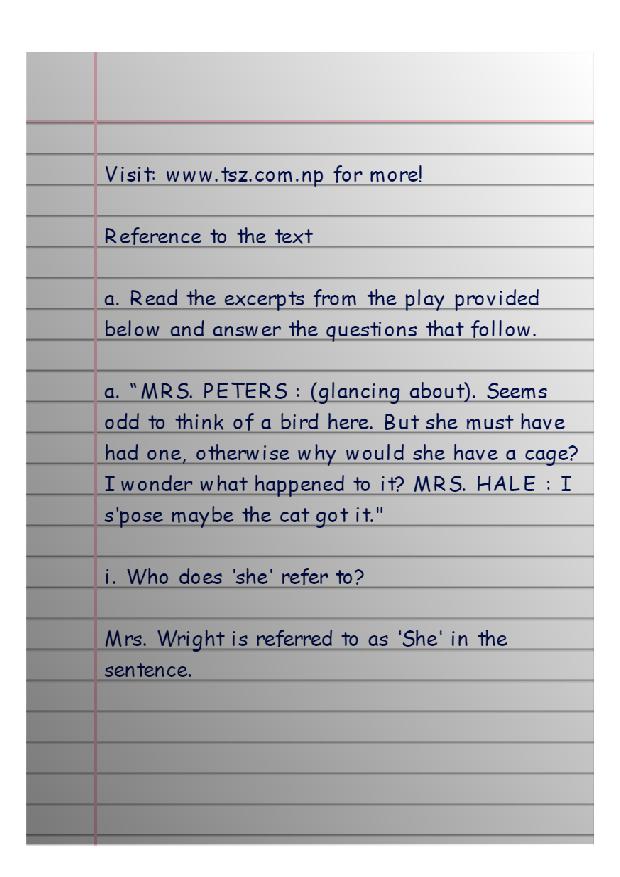 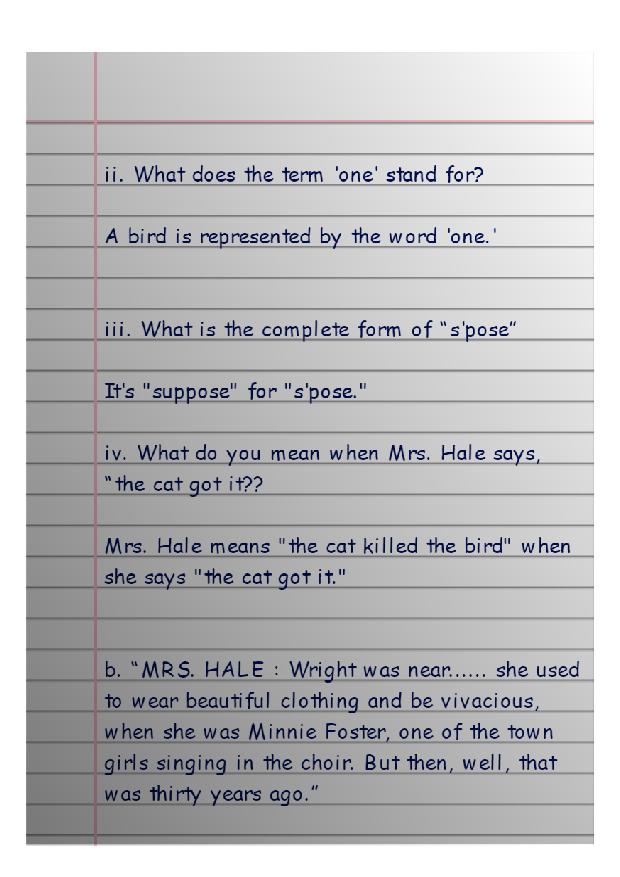 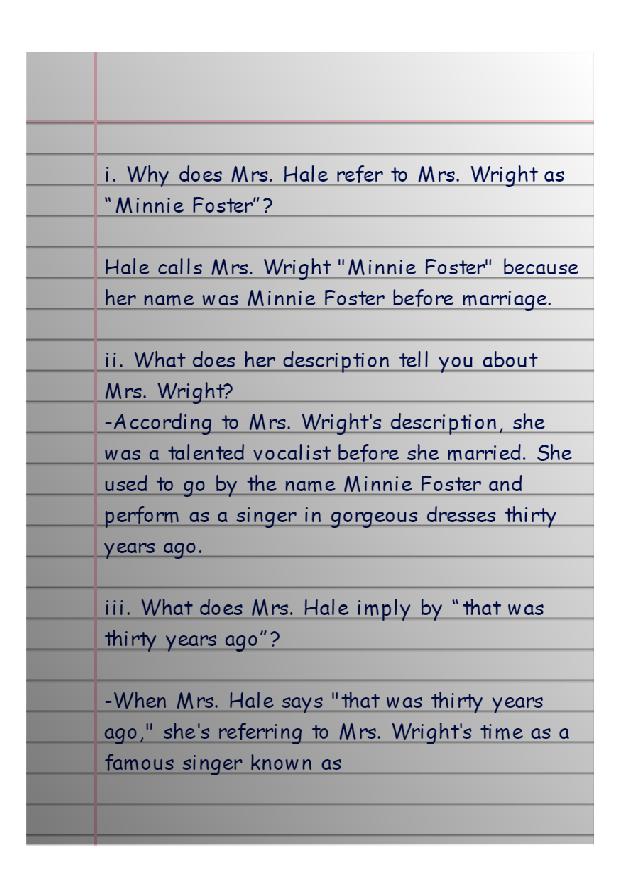 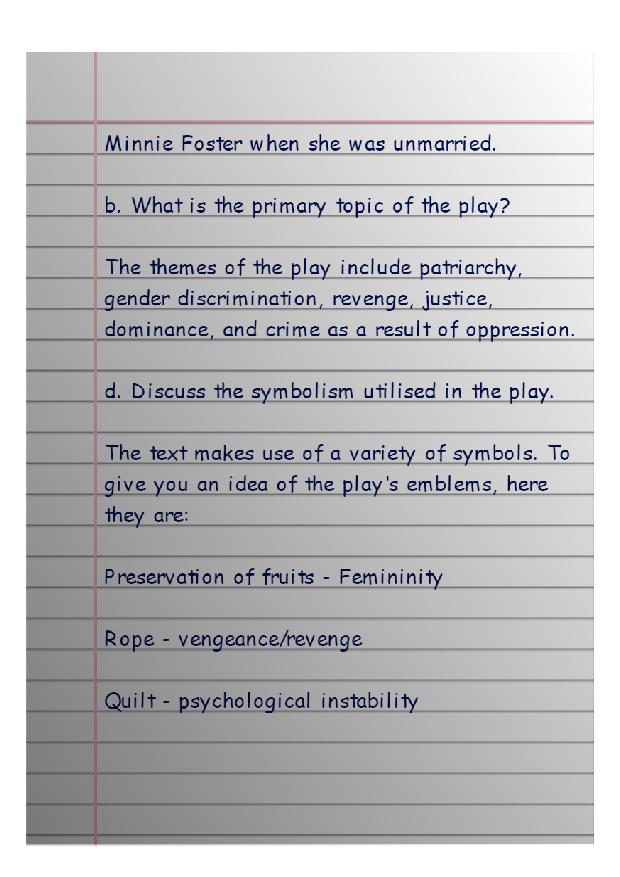 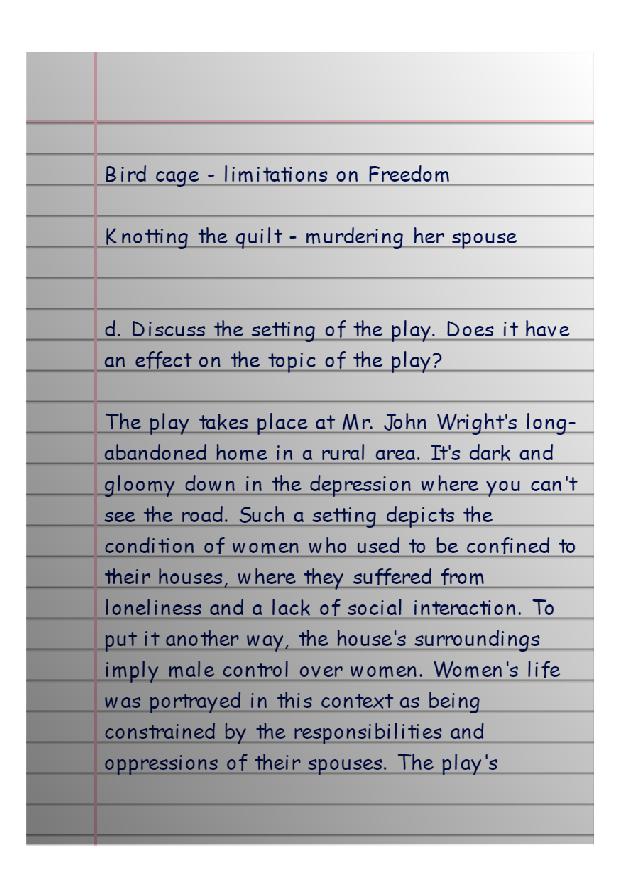 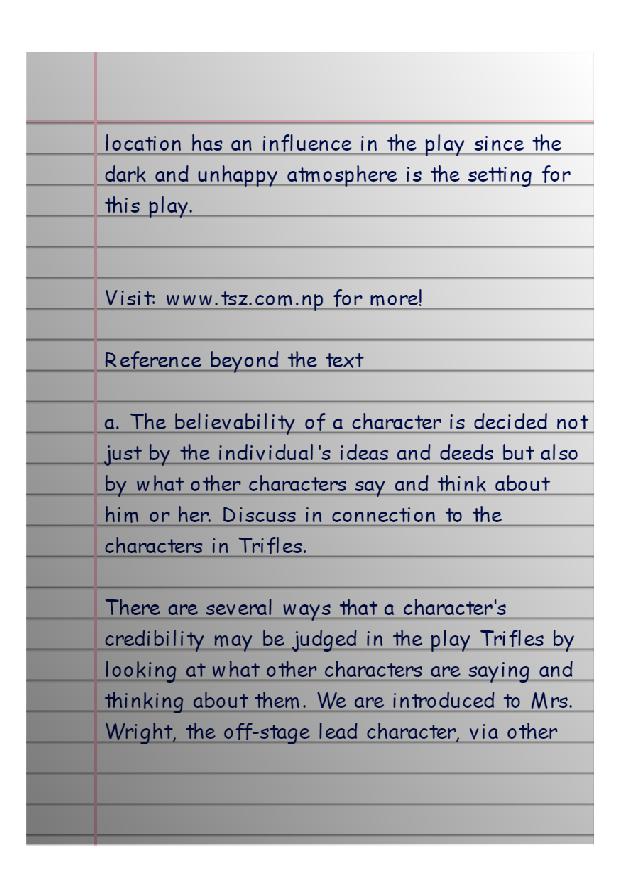 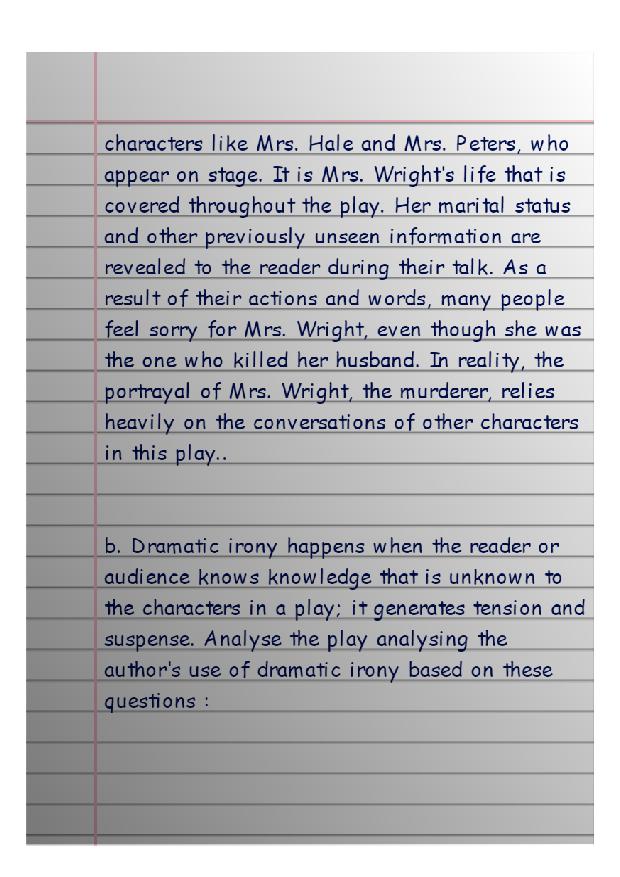 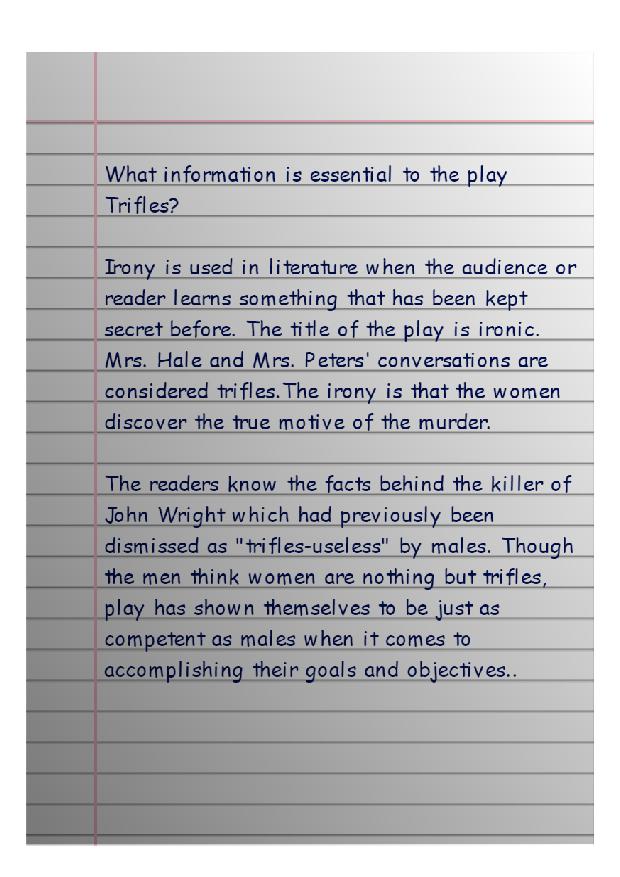 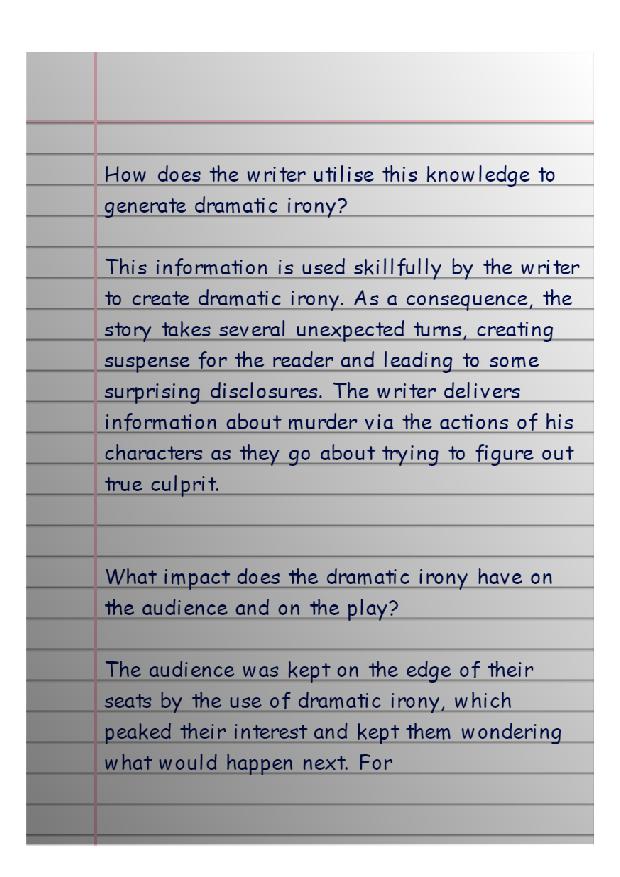 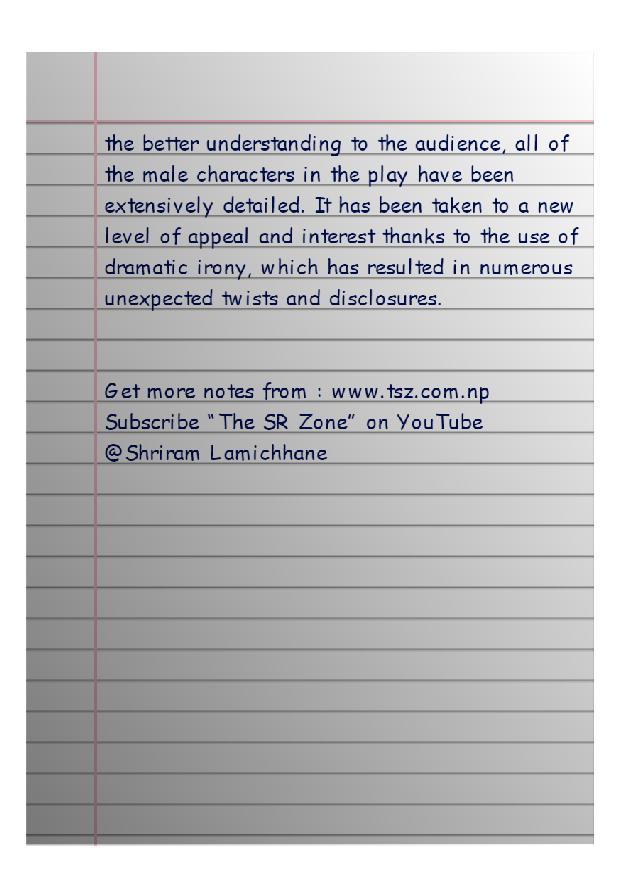 If you want to read the summary of Trifles, you can go to following link.

The play "Trifles" begins with the investigative team discovering unwashed dishes, an undercooked loaf of bread, and a filthy towel on the table at John and Minnie Wright's abandoned farmhouse. The kitchen seems to be in disarray.

George Henderson, the county attorney, arrives at the home, followed by local sheriff Henry Peters and adjacent farmer Lewis Hale. Mrs. Peters and Mrs. Hale, the wives of two of the men, look concerned and frightened as they accompany the men inside. (Introduction) • Lewis Hale is asked by the sheriff to explain the situation he found at the farmhouse the day before. Before Mr. Hale starts, Mr. Peters tells Mr. Hale that nothing has changed in the home since the last time he viewed it. He has, however, sent one of his men ahead to start a fire. He says that he couldn't keep one of his guys there to watch the home the day before because they were too busy.

Mr. Peters was aware that George Henderson would come the next day to search the home for proof. Mr. Hale recounts his arrival at the Wrights' house the day before. He had been trying to persuade John Wright to join him in purchasing a party-line telephone and figured that asking him in front of his wife would help, but he admits that John paid little heed to what his wife desired. When Mr. Hale arrived at the home, he saw Minnie Wright in her rocking chair. She seems to be out of sorts, according to him. Mr. Hale inquired about seeing John, but Minnie informed him that he couldn't since John was no longer alive.

When Mr. Hale inquired about his cause of death, Minnie said that he perished from a rope around his neck. Mr. Hale explains that he summoned one of his men, who went upstairs and discovered John Wright's corpse. His initial impulse after seeing the corpse was to remove the rope, but his buddy warned him not to touch anything and to save it as evidence. He questioned Minnie Wright about who murdered her husband before departing. Despite lying in the same bed as him, she claims she was not awake when the incident occurred. When Mr. Hale summons the coroner to examine Minnie, the county attorney inquires as to what she did. Mr. Hale claims she remained silent.

Minnie smiled and then looked terrified when he said that he'd come to inquire about installing a telephone. Mr. Peters is asked by George Henderson whether there is anything in the kitchen that might lead to a reason for John Wright's death, but the sheriff dismisses the scene as insignificant, as if it were just kitchen items. The disaster is caused by Minnie's exploding canning jars of fruit, which the county attorney finds.

Mrs. Peters claims she knew Minnie was concerned when the weather turned chilly, and her husband chuckles at a lady caring about fruit while being imprisoned for murder. "Women are accustomed to fretting about trifles," Mr. Hale adds. (Women's Concerns) Looking around the kitchen and seeing the filthy towel in particular, George Henderson remarks that Minnie seems to be a bad housekeeper. Mrs. Hale stiffly reminds out that keeping a farmhouse running requires a lot of effort. Mrs. Hale is accused by the attorney of being loyal to her own sex, or at the very least to her acquaintance. Mrs. Hale, on the other hand, says that she hasn't seen Minnie Wright in a few years. She says that she was preoccupied and that the Wrights' house did not seem to her to be very pleasant.

When the attorney presses her further, she assures him that she was not disparaging John Wright in any way. Mr. Peters asks George Henderson if his wife may go to the prison and fetch a few things for Minnie Wright. The lawyer concurs. He'd want to see what she's doing, however. The guys ascend the stairs. Mrs. Hale is irritated by the men entering Minnie's room and accusing her of being a bad housekeeper. Mrs. Peters, on the other hand, points out that the guys are just performing their jobs. Mrs. Peters finds Minnie Wright's bread, which she had left out but not cooked. Mrs. Hale understands Minnie's frustration at her fruit canning jars going to waste. (Women's Situation)

Mrs. Hale believes Minnie had very little money for herself and her husband when the ladies gather some clothing for her and Minnie wears them. She also thinks Minnie must have been extremely frugal with her money, which is why she didn't participate in other women's activities.

Before her marriage, Minnie was a highly active young lady. Mrs. Hale and Mrs. Peters acknowledge the oddity of murdering a man in the manner in which John Wright was murdered: strangled in his sleep. Mrs. Peters believes George Henderson was waiting for proof that would prove a murderer's intent. When the guys return, they overhear the ladies discussing the quilt Minnie Wright was working on and laughing at the women. The guys make their way to the barn. Mrs. Hale despises the men, but Mrs. Peters tries to justify them.

The ladies conclude that Minnie was frightened or disturbed because of the badly made quilt. (Women attempting to resuscitate Mrs. Wright) Mrs. Peters notices an empty birdcage in a closet while preparing clothing to be transported to the prison. The cage has been shattered, and the door has been yanked open. This suggests that Mr. Wright may have murdered Minnie's sole companion, the bird. When Minnie was lonely, she would sing with the bird. Mrs.

Hale regrets not paying a visit to Minnie since Mr. Wright was a difficult guy and Minnie needed some help. She informs Mrs. Peters that Minnie was a lovely and shy girl before she married Mr. Wright, but that she became a timid and sad lady after they married. A dead bird is discovered in a beautiful red box by Mrs. Hale. The neck of the deceased bird is twisted. The ladies bury the corpse and inform the men that the bird was perhaps devoured by a cat.

Mrs. Hale believes Mr. Wright murdered the bird out of rage. Mrs. Peters reminds Mrs. Hale that "crime must be punished by the law." Mrs. Hale wonders who is to blame for not visiting Minnie, the lonely girl, and "who is going to punish that?" Mrs. Hale claims she should have recognised Minnie's need for assistance since "every woman goes through a different type of the same thing." Finally, George Henderson confirms the murder, but he has no idea why John Wright was killed in such an unusual manner. Staying at home for a while, the attorney wants to go over everything. When Mr. Peters asks if he may examine what Mrs. Peters is bringing to Minnie in prison, the attorney replies she's trustworthy since "a sheriff's wife is married to the law."

a. Do you think that Mrs. Wright murdered her husband? Explain.

Certainly, I think that Mrs. Wright killed her husband. Mrs. Wright had a horrible time at home because of her husband's harsh behavior and restrictions on her independence. Their relationship was much worse as a consequence. Her sole companion, a bird, was also murdered by him. In order to avenge all these, Minnie must have murdered him.

b. Do you believe Mr. Wright's death would have been discovered if Mr. Hale hadn't dropped by the Wrights' home?

I think nobody could know if Mr. Hale hadn't gone to Mr. Wright's home to see him. Mrs. Wright had always refused to make a confession because she had killed him thinking he deserved death for his bad deeds and manners.

c. Why does Mrs. Hale believe that Mrs. Wright's concerns about her preserves show her innocence?

Mrs. Hale thinks that Mrs. Wright's concern for her preservatives shows her innocence and her guilt cannot be proven because a simple woman who always had concerns over the small things like fruit jars can never commit such a big crime.

d. How does Mrs. Peter's homesteading experience link her to Mrs. Wright?

In many ways, Mrs Peters and Mrs Wright are linked by their shared experience of homesteading. Mrs. Peters doesn't know much about Mrs. Wright's condition. She sees herself and Mrs. Wright as both being victims of a patriarchal culture that oppresses women. She recalls a time in her past when she felt helpless in the face of male aggression.

From childhood, she had been the prey of male dominance. When she was a child, she had a kitten. A hatchet-wielding kid slashed it to pieces right in front of her. She was so furious, willing to kill him back but she was helpless. She is drawn to this encounter by her desire to avenge the death of her canary. In addition, she also lost her first kid so she went through a tough time. As a result of this, she has a better understanding of Mrs. Wright's distress over the loss of her pet canary.

g. How do women's views on males differ?

The views of women on males diverge throughout the play. Mrs. Peters and Hale have differing opinions on males because of their distinct backgrounds. Her husband is a sheriff, so she follows the rules and apologises for the men's conduct when they misbehave since they are just doing their jobs. Peters, "the law is the law," therefore she initially supports her husband's inquiry.

When examining the home for evidence, Mrs. Hale shows sympathy and support for Minnie against the men’s criticism and kitchen’s interference.. Hale is kinder to Mrs. Wright but Mrs. Peters is more  somehow supportive to the males. Instead of cowering in fear in front of the men as Mrs. Peters did, Mrs. Hale seemed more straightforward than her.