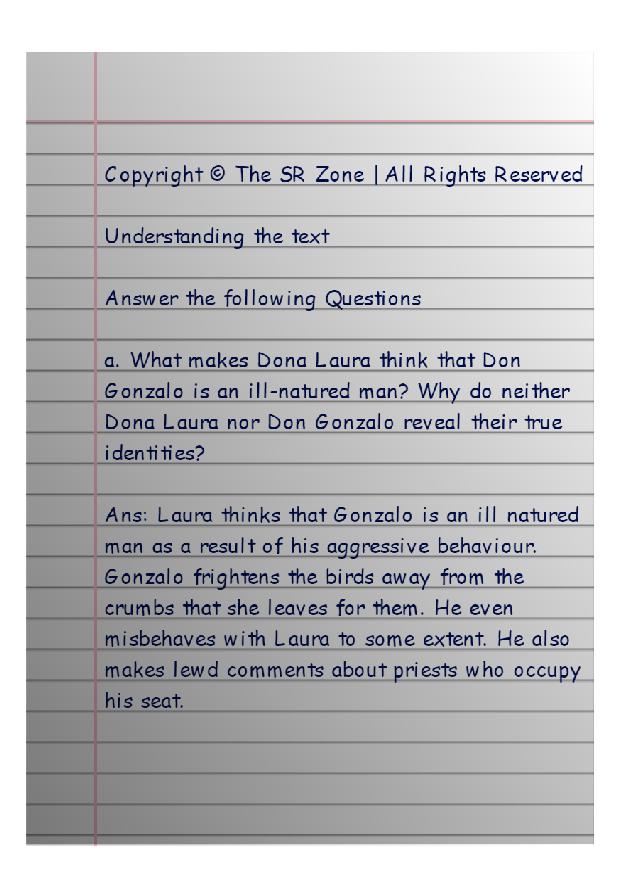 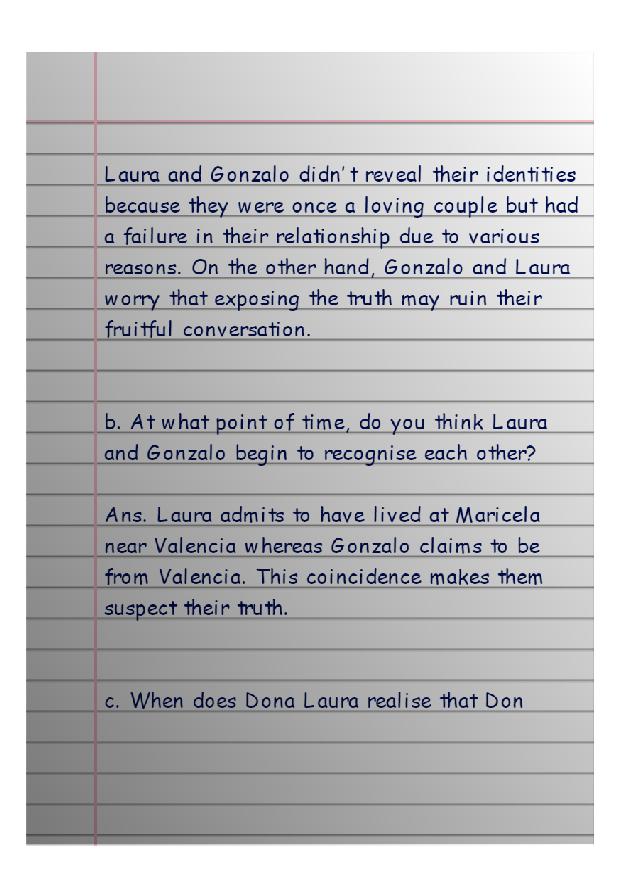 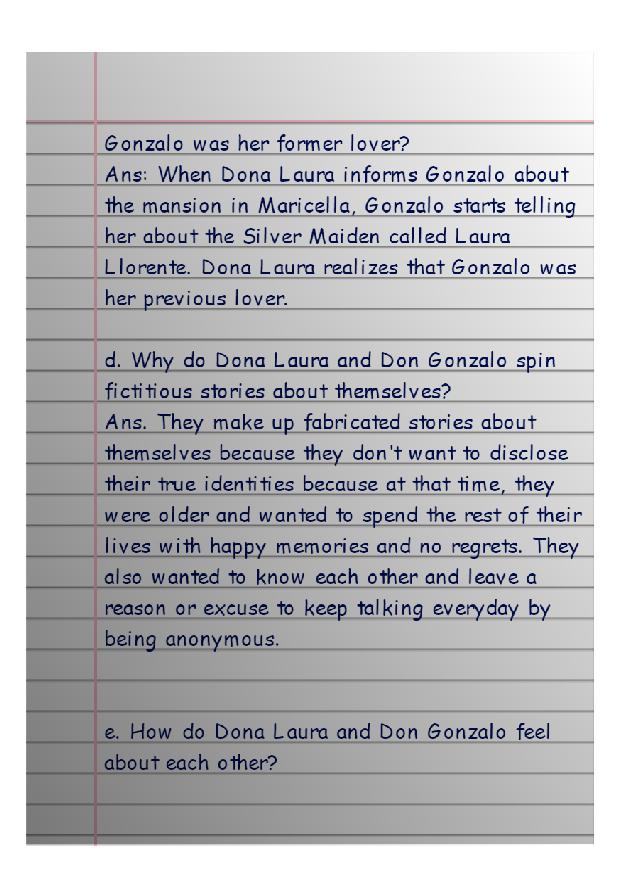 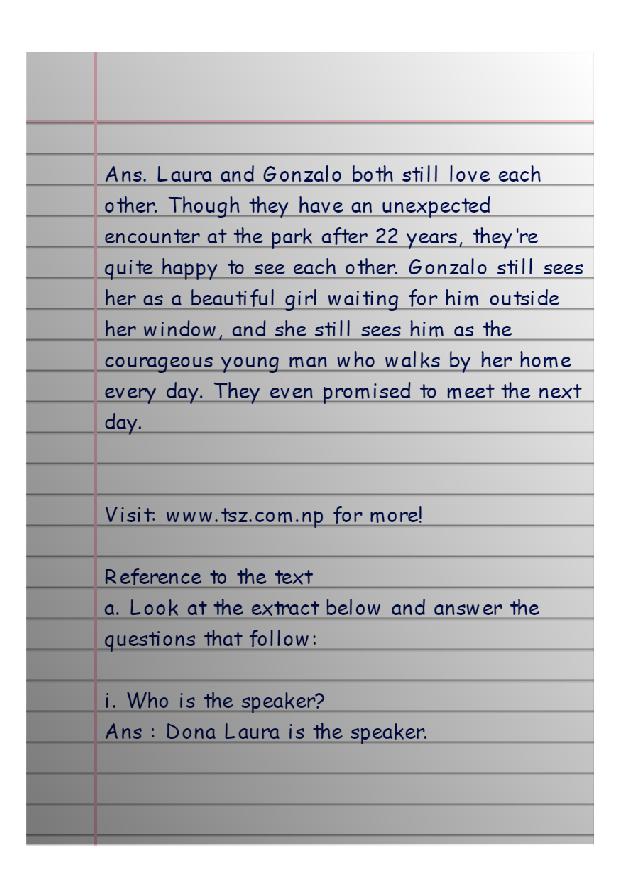 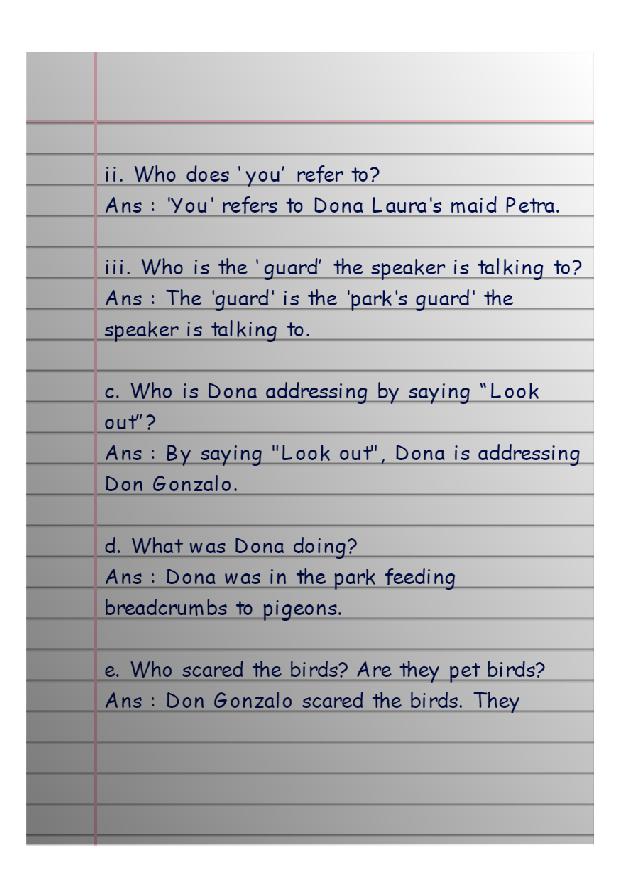 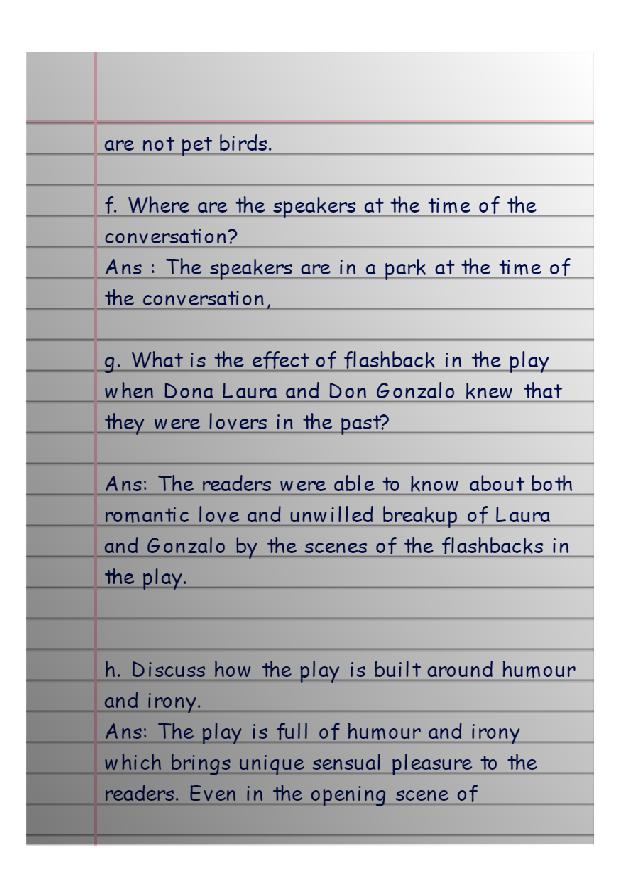 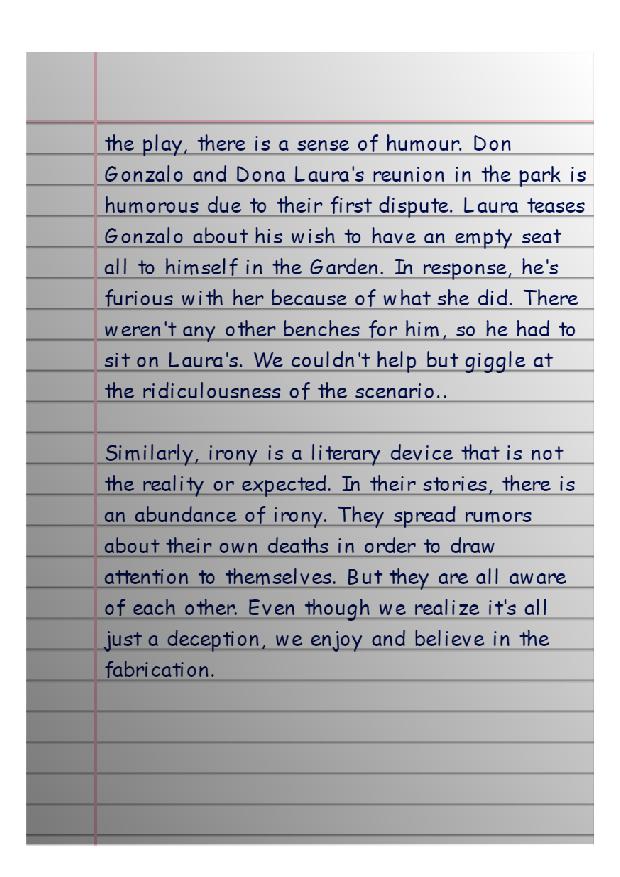 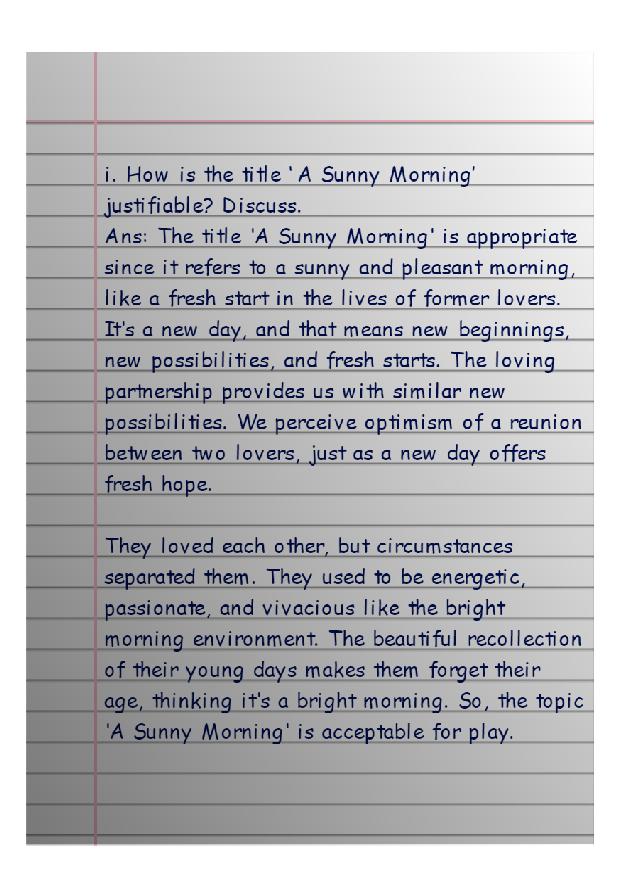 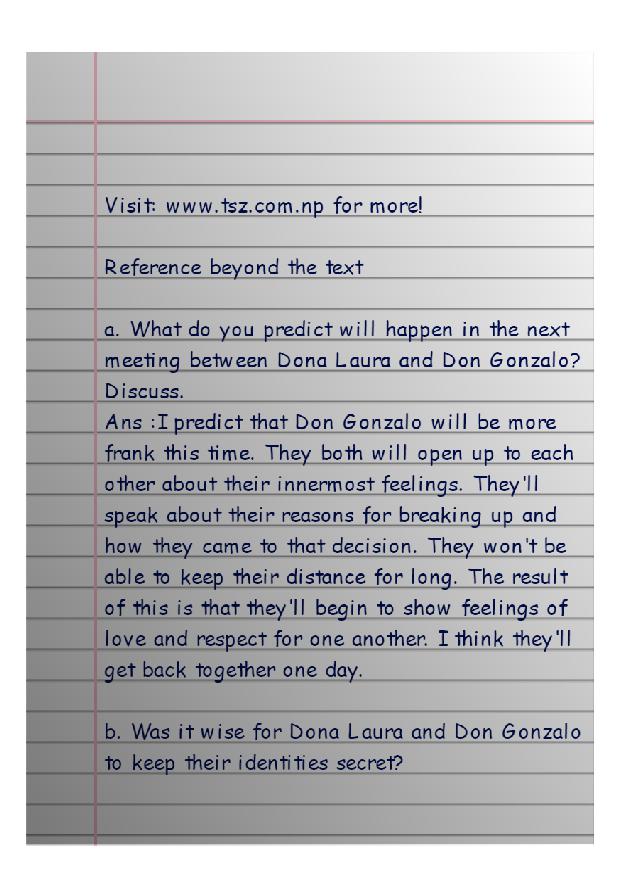 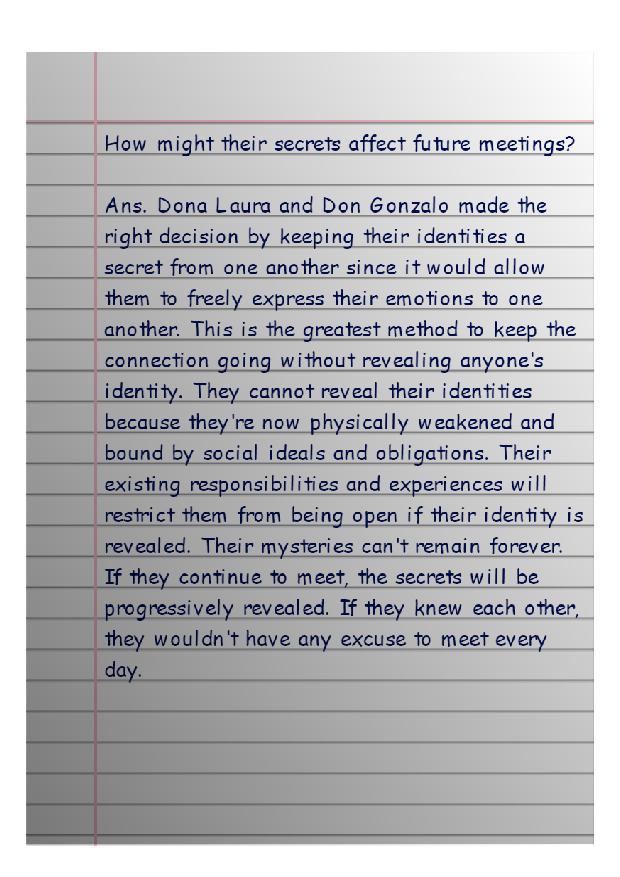 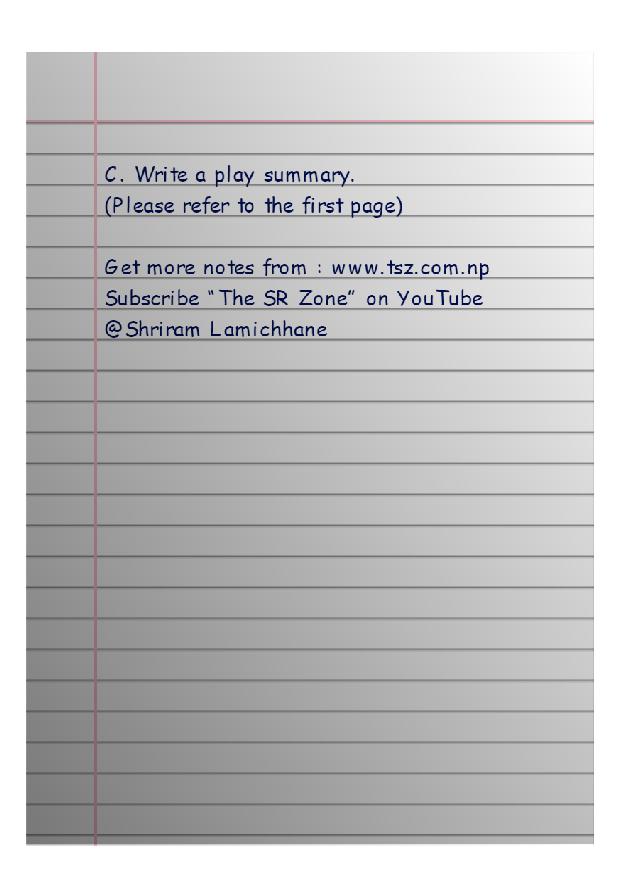 The romantic comedy "A Sunny Morning" written by Serafin and Joaquin Alvarez Quintero  tells the story of the reunion of two former lovers who are now in their 70s. They had been passionate lovers in their youth but were separated by destiny. A park seat in Madrid, Spain, on a bright morning is the setting for this play.

It's a beautiful spring day when the play begins, and the action takes place in a park in Madrid. Dona Laura, an elderly woman, appears on the scene. She is accompanied by Petra, her maid, and sits on a bench to feed the birds with breadcrumbs they have collected.

Also arriving in the park is Don Gonzalo, who is accompanied by Juanito , his valet. Don Gonzalo appears to be displeased when he discovers that there isn't a single empty bench in the park. Three priests have taken up seats in the one he normally uses when visiting the park. He approaches Laura and reluctantly sits near her.

Because the old man was attempting to frighten the pigeons, Laura became enraged . She calls him "an ill-natured man." It's just that after a few seconds of disagreeing, they settle their differences by sharing a pinch of snuff.

In response to Gonzalo's claim that he is from Valencia, Laura reveals that she is from Maricela, where she grew up in a villa. There was a woman named Laura Liorente who lived in a villa there, and she was perhaps the most beautiful woman he had ever seen, according to Gonzalo, who was shocked by the revelation.

Once they'd talked for a while, it became clear that they knew each other, but they didn't want to reveal their true identities due to the cruelties of fate.

They try to be ignorant by sharing false tales about their own deaths that serve as a romantic throwback for both. In their youth, they used to exchange flowers whenever he passed by her home on his way to somewhere else. Her parents, on the other hand, wished for her to wed someone else. Gonzalo beat that man very badly and fled. Their love didn't work out for them romantically. Despite being apart, they still thought about each other often.

Don Gonzalo also made an effort to fabricate a story about his alleged cousin. His story goes like, soon after inflicting serious injury on the merchant, he fled to Seville and Madrid, where he sought refuge from the authorities. All of his letters to her had been seized by her parents. In the absence of a response, he joined the military out of desperation and was sent to Africa, where he died in a war while mumbling Laura's name.

The real story was that Laura eventually married and had a family after they were apart for two years. After being devastated by the loss of his first love, Gonzalo married a ballet dancer three months later and moved to Paris. Even though they were separated, their desire for romantic love persisted in their minds.

They were able to remember their intense love affair when they reunited in the park almost 50 years after they last saw each other. It didn't matter how well they knew one other in actuality; they were still reluctant to disclose their connection since they had lost some of their lustrous youth. Even though they know they're lying, none of them wants to admit it.

Finally, they promise that they'll see each other the next day with a positive attitude.

a. What makes Dona Laura think that Don Gonzalo is an ill-natured man? Why do neither Dona Laura nor Don Gonzalo reveal their true identities?
Ans: Laura thinks that Gonzalo is an ill natured man as a result of his aggressive behaviour. Gonzalo frightens the birds away from the crumbs that she leaves for them. He even misbehaves with Laura to some extent. He also makes lewd comments about priests who occupy his seat.
Laura and Gonzalo didn’t reveal their identities because they were once a loving couple but had a failure in their relationship due to various reasons. On the other hand, Gonzalo and Laura worry that exposing the truth may ruin their fruitful conversation.
b. At what point of time, do you think Laura and Gonzalo begin to recognise each other?
Ans. Laura admits to have lived at Maricela near Valencia whereas Gonzalo claims to be from Valencia. This coincidence makes them suspect their truth.
c. When does Dona Laura realise that Don Gonzalo was her former lover?
Ans: When Dona Laura informs Gonzalo about the mansion in Maricella, Gonzalo starts telling her about the Silver Maiden called Laura Llorente. Dona Laura realizes that Gonzalo was her previous lover.
d. Why do Dona Laura and Don Gonzalo spin fictitious stories about themselves?
Ans. They make up fabricated stories about themselves because they don't want to disclose their true identities because at that time, they were older and wanted to spend the rest of their lives with happy memories and no regrets. They also wanted to know each other and leave a reason or excuse to keep talking everyday by being anonymous.
e. How do Dona Laura and Don Gonzalo feel about each other?
Ans. Laura and Gonzalo both still love each other. Though they have an unexpected encounter at the park after 22 years, they're quite happy to see each other. Gonzalo still sees her as a beautiful girl waiting for him outside her window, and she still sees him as the courageous young man who walks by her home every day. They even promised to meet the next day.