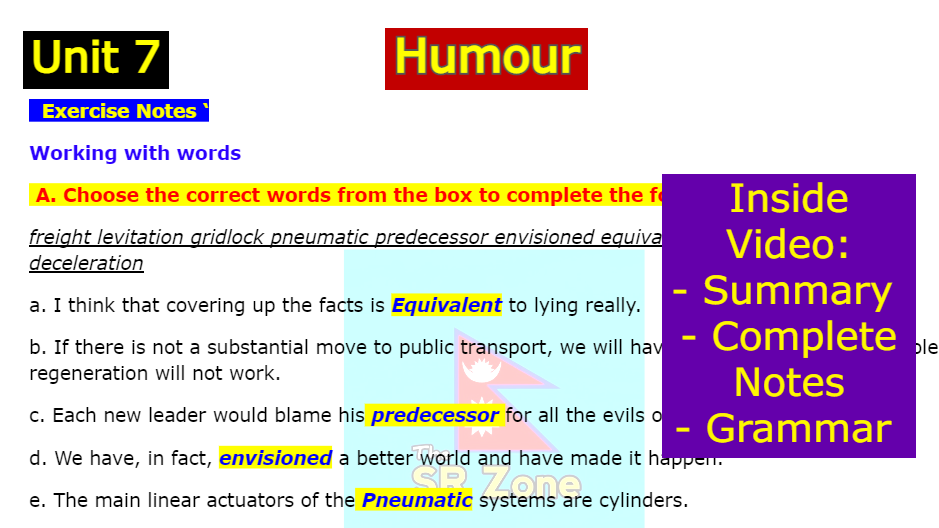 Why do we laugh Inappropriately?

B.Match the following emotions with their definitions.

a. Fear =  vi. an unpleasant emotion caused by the threat of danger, pain or harm

b. Anger = v.  a strong feeling of displeasure

d. Disgust = i. a feeling of strong disapproval aroused by something unpleasant

g. Relief = viii. removal or lightening of something oppressive, painful, or distressing

i. Contentment = vii. the quality or state of being satisfied

C. The author writes, “... the contagious nature of laughter means that waves of mirth can catch on more easily when there are more people.” Find out the situations in which the following types of laughter are found.

a. Etiquette laughter : Laughing or smiling with good manners, even if the topic isn't amusing, which is a sign of respect for others, regardless of their age or status, or position.

b. Snorting laughter :Laughing involves exhaling or inhaling via the nose, depending on the person.

E.  Nervous Laughter :  Nervous laughter is a kind of laughing that is not amusing which is produced as a result of embarrassment, discomfort or perplexity.


D.A unit of pronunciation at least with one vowel is called a syllable. Listen to your teacher saying the words and say the number of syllables.

A. Complete the following sentences with words/ phrases from the text.

a. According to Sophie Scott, laughter is one of the most important and misunderstood behaviours.

b. After her study in Namibia, Scott came to the realization that laughter is one of our richest vocal tics.

d. Scott found out that most of the laughs have nothing to do with humour.

e. The couples who laugh at each other are likely to stay together for longer.

f. The primary way of communication of grown up people is to express feelings and meet social expectations.

g. Comedians usually find it easier to work in larger places due to the contagious nature of laughter.

a. Why do people giggle at someone's pain or suffering?

People giggle at someone else's agony or suffering because their brains are activated by the sensation of such news, but they may later come to realize that they are actually sympathizing with them and doing their best to alleviate their suffering.

b. What did Scott's study in Namibia come up with?

Scott’s study in Namibia has found that laughter is one of the most expressive voice qualities.

C. How is laughter a social bonding?

Laughter is a social bonding because a social connection is formed when people laugh together, which shows they enjoy and agree with one another as well as that they are part of the same social group.

d. According to the author, what role does laughter play in a husband wife relationship?

According to the author, their relationship is more likely to last a long time if they can laugh together after a stressful experience.

E. How does laughter work as a painkiller?

Laughter works as a painkiller because endorphins are released as a result of laughter, which makes people feel better when they're in pain.

f. What did the study find about the relation between laughter and the brain?

The study finds that the brain operates as a mirror region and is alloyed by laughter, which has a close connection to each type of laughter.

g. What are two emotions that the author associates with infants and adults?

Infants' crying is the primary means of communication, whereas an adult's crying is more significant because it is associated with uncontrollable and unnatural emotions.

h. How does a stand-up comedian take the audience's laughter?

A stand-up comedian views the laughter of the audience as an opportunity for communication and interaction.

i. Show the relation between laughter and crowd.

The crowd and laughter are directly related to the activities or dialogue taking place, as the laughter of the crowd represents a wave of amusement in them and they are enthusiastic and supportive of what is going on.

J. What does the author mean when he says "there is always a meaning to it?”

When the author says, "There is always a meaning to it," she is implying that laughter has a variety of meanings depending on the context in which it is used.

a. Do you agree that the couples, who laugh together, stay together?'Is it important for married couples to have the same sense of humour? Why?

Yes, I agree that the couples who laugh together, stay together.' Also, It is important for married couples to have the same sense of humour. Couples who enjoy one other's company are more likely to remain together.

Laughing together signifies supporting each other's opinions and maintaining a connection or link, which is important for married couples. They are more likely to remain together longer, and laughing together encourages them to share more personal information, allowing them to establish a stronger bond.

In addition to this, Laughing helps them cope with stress. It strengthens their friendship and their partnership. It's a good idea to back each other up. Because of this, they are more likely to remain together for the long term. It provides them with a window into their own personal data.

b. Some people believe that sometimes crying is good for health. Do you believe it? Give your reasons.

Crying may be beneficial to one's health, according to some people. I also believe that statement because I have some scientific reasons to believe. As a natural technique to alleviate mental stress, it removes stress hormones and other pollutants from our bodies. People who cry feel less anxious or tense. When people weep, they return to their regular selves, free of the competing desires they had been holding in. A person's inner wounds may be released as a result of this practice.

A. Write a paragraph narrating an event from your life when you were involved in contagious laughter.

Laughter is called contagious when one person laughs, and the laughter spreads to others. We visited the Bhairav Sthan Temple with our college friends last year. It was early in the morning. In our luggage, we had a few packets of dry food. Hari was going really slowly and was at the end of the queue, so one of my pals - Ram made a joke about him being a tortoise. Everyone began laughing as a result of Ram's amusement, which in turn made everyone else laugh as well. All of us were stricken with laughter by that incident. At the conclusion, Hari began to chuckle as well. It was an occasion in my life that brought a grin to my face every time I remembered it, and it's one that I'll never forget.

B. Write a description of your favourite comedian explaining his/her personality, acting, performance and uniqueness.

My favourite comedian is Kedar Ghimire. He is popular by his stage name ‘Magne Budha’. He is a well-known Nepali comedian, actor, director, and social worker. He is also an accomplished playwright, director, and actor. TV serials in Nepal include him as one of their key characters. Meri Bassai used to be one of the best and most successful Tele Serials because of humorous characters like him. When people see him in action, they can't stop laughing. Though he stopped working in Meri Bassai, he  starred in the box office success Chha Ekan Chha. Wada Number Chha, his second film, was likewise a hit. The Nepalese people like his acting, charisma, and social activism. As a social worker, he is also quite active. In the wake of the earthquake, he has done much to help those in need. He has also constructed houses for many victims during disasters and pandemic.

B. Put the frequency adverbs in the appropriate place and rewrite the following sentences.

a. I forget to do my homework. (sometimes)

- I sometimes forget to do my homework.

b. My father has touched an alcoholic drink in his life. (never)

- My father has never touched an alcoholic drink in his life.

c.My father goes for a walk on Saturdays. (often)

- My father often goes for a walk on Saturdays.

d. We go to the movie theatre. (occasionally)

- We occasionally go to the movie theatre.

e.My brother is in America. He telephones us. (from time to time)

- My brother telephones us from America from time to time.

f. My mother gets up at five o'clock. (always)

-My mother always gets up at five o'clock.

g. He does not like alcoholic drinks but takes some wine. (now and then)

- He does not like alcoholic drinks but takes some wine now and then.

h. I Drink my tea with milk. (generally)

- I generally drink my tea with milk.

- Have you ever been to Agra?

j. The restaurant hours vary as it is booked for special events. (frequently)

- The restaurant hours vary as it is frequently booked for special events.