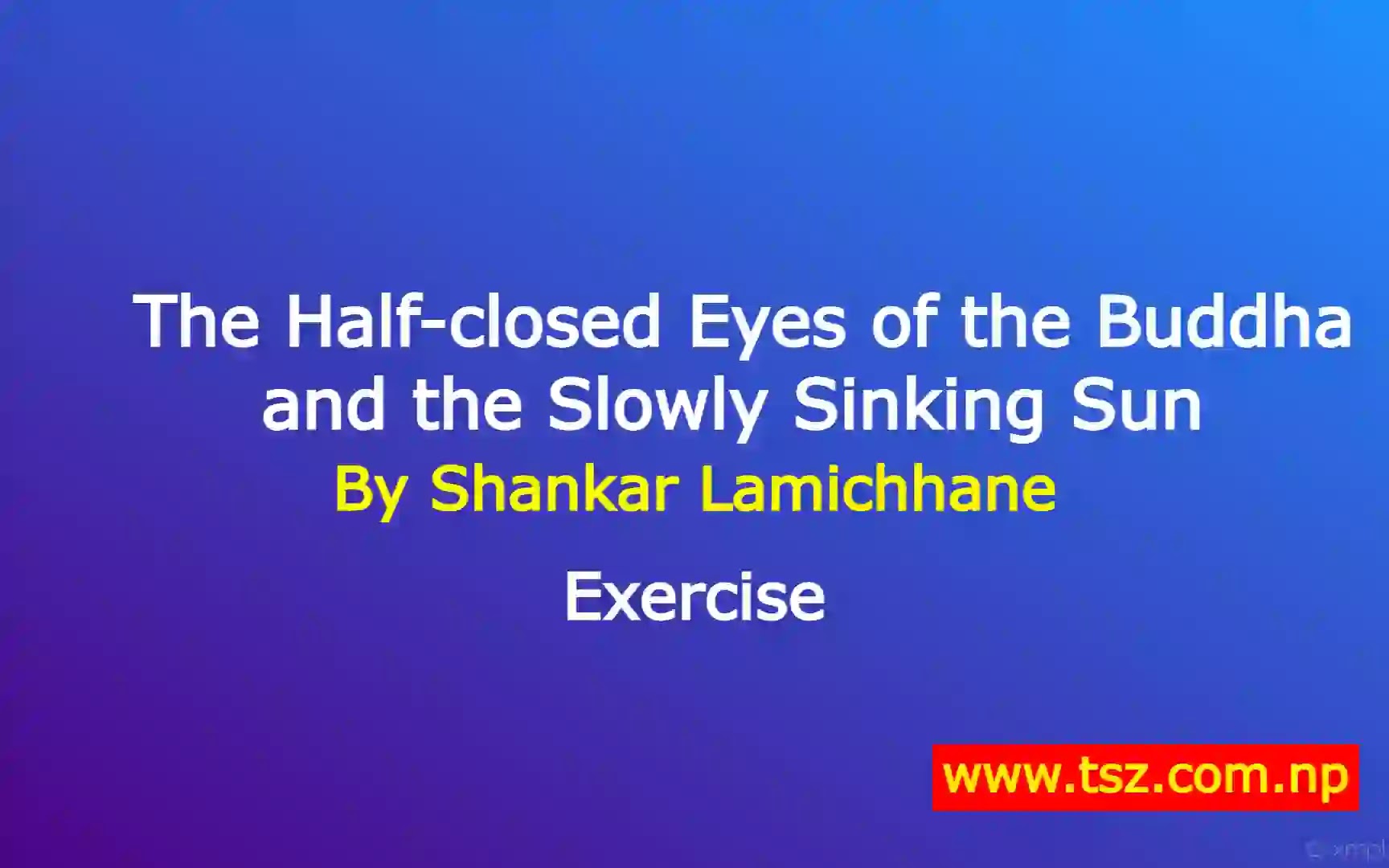 The Half-closed Eyes of the Buddha and the Slowly Sinking Sun Exercise Questions Answers solution and full notes. This story is written by Shankar Lamichhane and enlisted in Class 12 English Book Story Section. All these questions answers have been prepared by Shriram Lamichhane.

a. How does the tourist describe his initial impression of the Kathmandu valley?

= The tourist describes his initial impression of the Kathmandu Valley by describing the natural sceneries and views of the valley which is decorated with rectangular landscapes and clay-made homes painted in red, yellow, and white. He adds that the air is filled with the scent of old-fashioned smell of soil and serenity of mountains.

b. According to the tourist, why is the West indebted to the East?

= West is indebted to the East because West has provided various Puranas, brass figures and ivory decorations, palm-leaf manuscripts and copperplate inscriptions, and most importantly, the holy civilization to the west..

c. How does the tourist interpret the gaze of the monks and nuns?

=  The tourist interprets the gaze of the monks and nuns as to have a holy sight that is able to view everything as it really is, which is free of any impurities, or discriminations.

d. Why do the tourists think Nepali people are wonderful and exceptional?

= The tourists believe Nepali people are wonderful and exceptional because of their welcoming smiles, peaceful and co-existent lives, their skillful arts of  ornamentations and styles in the wooden pictures, their belief in deities, traditional and unique musics and ornaments etc.

e. What are the different kinds of communities in the Kathmandu valley and how do they coexist with each other?

= The different kinds of communities in the Kathmandu Valley range from Aryans to the non-Aryans to the Hindus to the Buddhists to all non - hindus. Everyone from all of these races were able to coexist because of the holy land, and their feeling of brotherhood.

f. What does the tourist feel about the temple of Adinath?

=  The tourist feels the temple of Adinath as the bridge stone of religious tolerance and coexistence of two different traditions. Shiva shrine is a hindu temple, but there are numerous Buddha statues and several prayer wheels with ‘Om mani padme hum’ written on them on the premise of the main temple as well. Childrens from different cultural backgrounds and origins were playing there happily. They are unconcerned with their gods, faiths, and ideologies.

g. Why does the guide take the tourist to the remote village?

=  The guide took the tourist to the remote village because he wanted to show him the eyes of a paralyzed child from a poor family to teach him what life is really like. Tourists only knew the bright and pleasing side of the country but the guide was trying to show him the compassionate side of this beautiful country.

h. What does the innocent village couple think of the doctor?

=  The innocent village couple believes the tourist to be their oldest son, who has come to give the brother a life-restoring medicine from the seven seas. The guide lied to them about the tourist being a doctor, but the tourist was not a doctor.

i. What are the differences between the paralyzed child and his sister?

= The biggest difference between the paralyzed child and his sister is mobility. There is just one organ that the paralysed kid can move: the eyes but his sister's body works perfectly. She is able to see, walk, talk, crawl, and take care of herself on her own.

j. Why does the guide show the instances of poverty to the tourist?

= The guide shows the instances of poverty to the tourist because he wanted the tourist to realize the hardships, struggles, obligations and miserable condition of common and poor families in Nepal. Tourist claimed himself to know a lot of Nepal, in fact he did, but he had never felt or known the compassionate side of this beautiful country.

a. Which narrative technique is used by the author to tell the story? How is this story different from other stories you have read?

= To narrate the story of "The Half-closed Eyes of the Buddha and the Slowly Sinking Sun," author Shankar Lamichhane uses the ‘stream of consciousness' technique. It is a storytelling technique that seeks to accurately portray a character's thoughts.

It's a voice within, but it's also something more. Stream-of-consciousness storytelling uses free association, repetition, sensory observations, and strange (or nonexistent) punctuation and grammar to let readers understand a character's mental state and worldview.

One of the things I admire about this writing style is how it flows. Not only that, but it's written in the second person by a foreigner and a guide to Kathmandu Valley. Rather than events, this story uses "stream of consciousness" to depict the characters' ideas.

b. How is the author able to integrate two fragments of the narration into a unified whole?

= The author of the short story "The Half-closed Eyes of the Buddha and the Slowly Sinking Sun" aims to weave together two separate narratives by linking them to each other via the use of eyes. The tourist only knows the brighter and happier side of the country but the tourist knows both / miserable side of the nation as well. It's clear from this passage that the author is talking about what's going on in his or her town and what people do to make money. Using farmers as an analogy, he points out that farmers are often ignorant of the world around them, because they are busy in their own struggle-full world.

As a result, he conveys a message about the need of seeing things from a different perspective in order to grasp the whole scope of the issue. A stream of consciousness storytelling method and the use of his eyes to describe the importance of the sights and activities are used by him to connect the guide's trip with the tourist's observation of the object.

=  The story "The Half-Closed Eyes of the Buddha and the Slowly Sinking Sun" blends historical and legendary references in the story. Even the Puranas demonstrate Nepalese pride in their heritage. Brass and ivory sculptures, palm leaf manuscripts, and copperplate inscriptions all show Nepal's cultural richness.

= Eyes are mentioned in a variety of ways, including: the shaven monks and nuns, the Himalayas, the paralyzed boy's eyes, the welcoming villagers' eyes, and finally the Buddha's half-closed eyes. Eyes capture the memories and everyone’s eyes or simply perspective differs from one another. Everybody has different views and different experiences. All in all, everyone’s eyes are safeguarded by the Lord Buddha's half-closed eyes, as implied by these many instances of eyes. Thus, these people's eyes reveal a new culture, religion, natural beauty, and the land of Buddha even if all history books were burned today. The journey of a tourist becomes more meaningful because of the memories that are formed via the eyes.

In short, Nepal is complete because of the existence of such varying eyes, because each eye has seen different things, memories and perspectives.

a. Write an essay on Living Proximity to Nature.

Nature is essential to our well-being in several ways. Nature includes air, water, animals, sunshine, and the moon. Nature is crucial to the growth and preservation of life on Earth. The natural environment provides food and shelter for a wide variety of creatures.

Nature provides everything from food and water to oxygen and medicine to shelter and clothing for humans. Nature has created all we see around us. The planet's attractiveness is enhanced by its range of color. All kinds of organisms, both living and nonliving, live in nature. Trees, plants, animals, the sky, mountains, and wooded areas all fall under this umbrella term.

In order to thrive, people are intrinsically linked to nature. Life would be impossible without the help of the natural world. As an example, it offers many forms of renewable energy and organic farming.

As a global community, we must work together to reduce environmental stress and reestablish environmental balance. Reusing and recycling old components to make new ones is an obvious way to assist people decrease natural damage.

b. The story talks about ethnic/religious co-existence of different communities in Nepal, where the Buddhists and the Hindus and the Aryans and non-Aryans have lived in communal harmony for ages. In your view, how have the Nepali people been able to live in such harmony?

Many ethnic and religious groups in Nepal have coexisted peacefully for a long time, according to the story "The Half-closed Eyes of the Buddha and the Slowly Sinking Sun." This is for a variety of reasons, the most significant of which are historical, cultural, political, and geographical. Individuals of different ethnic and religious origins, in my view, have been able to cohabit peacefully in Nepal because they all adore the same deities. People from different origins all over the world have settled in Nepal, bringing their religious traditions and practices with them. People were more receptive to embracing the gods and practices of other civilizations since the constitution also proclaimed the country to be secular, granting religious freedom to the people.