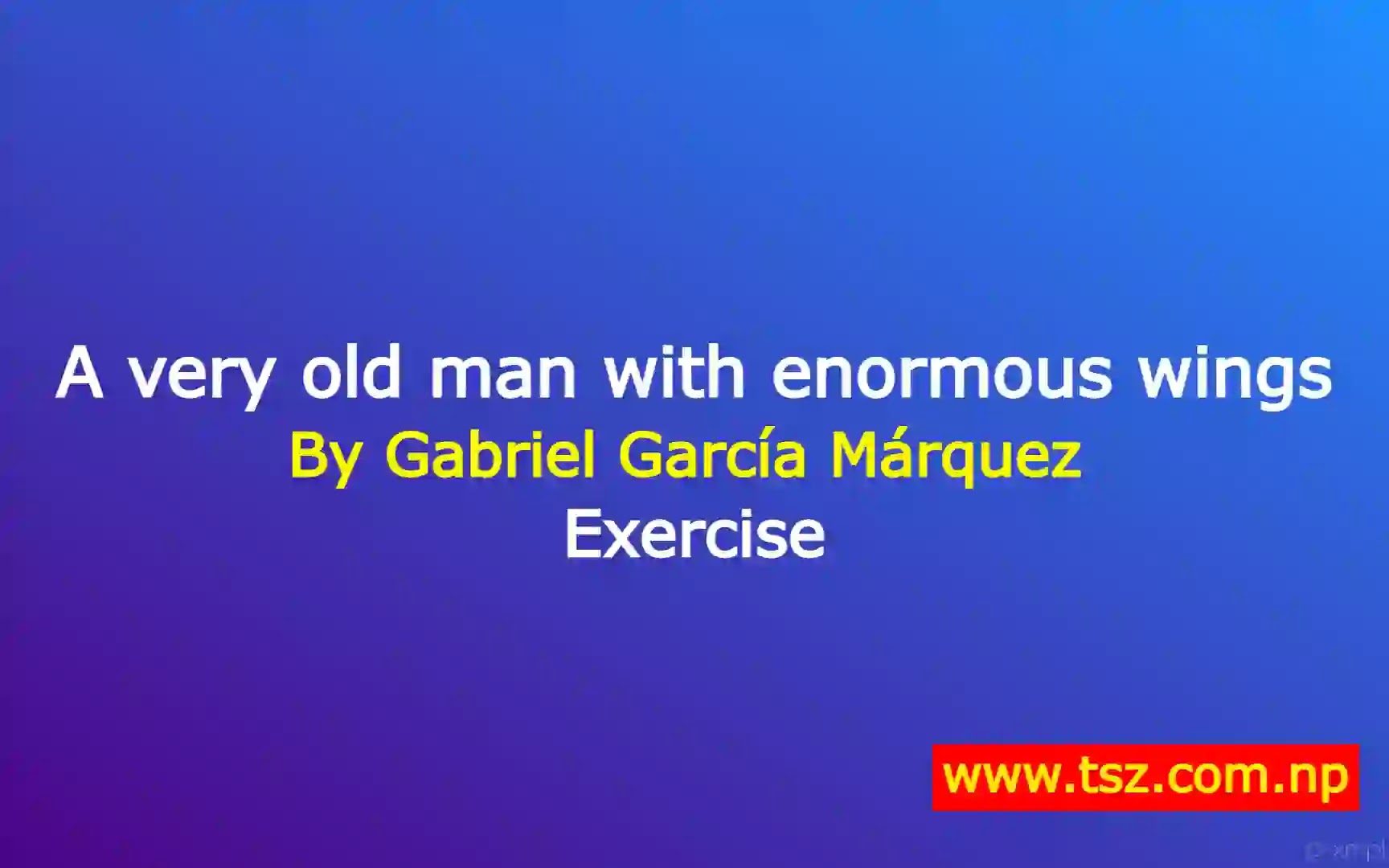 a. How does the narrator describe the weather and its effects in the exposition of the story?

It had been raining for three days as the story opens, and Pelayo was throwing crabs from his home into the ocean. His house was nearer the ocean and their child was having a high fever, he thought that was because of the smell of crabs.

b. Describe the strange old man as Palayo and his wife first encounter within their courtyard.

The strange man was clothed in the manner of a ragpicker. His bald head was almost completely shaved, and his mouth was almost empty with sans teeth. His enormous buzzard wings, filthy and half-plucked, were constantly twisted in the muck.

c. Why did Pelayo and Elisenda imprison the old man in the chicken coop?

Pelayo and Elisenda imprisoned the old man in the chicken coop because they wanted to protect their child who was in danger by the arrival of the old man. It was a neighbor woman who told the couple about the elderly man's identity that angels were escaping a spiritual conspiracy and coming to the earth to take childs.

d. Why was Father Gonzaga not sure about the old man being a celestial messenger?

Father Gonzaga, the local priest, was not sure about the old man being a celestial messenger due to his ragged appearance and his lack of knowledge of Latin. He believed that the Latin language was the language that divine figures speak, and in order for him to be an angel, he must understand and speak latin.

e. Many people gathered at Pelayo's house to see the strange old man. Why do you think the crowd assembled to see him?

Many people gathered at Pelayo's house to see the strange old man because the larger wings behind the elderly guy gave him an odd appearance like a unique creature. They were curious to know his identity, where some believed he was God's prophet, while others just liked to tease him.

f. Some miracles happened while the crowd gathered to see the strange man. What are these miracles?

g. State the irritating things that the people did with the strange old man.

The old man was subjected to insults since he failed to impress anybody. Then they wounded him repeatedly with a branding iron. He was so feeble that he could not react to anything. Then, they pulled his feathers and threw stones at him in order to make him stand. As a result, the old man's demeanor shifts from passive to abrasive.

h. How and why was the woman changed into a spider?

The woman had changed into a spider because of lightning. She had gone out to a dance without permission, and as she was returning through the forest, a tremendous lightning strike shattered the sky, enabling a bolt of brimstone lightning to hit through the gap, converting her into a spider.

i. Describe how Elisenda saw the strange man flying over the houses.

Elisenda was chopping vegetables in the kitchen when she felt the breeze and walked to the window to check it out. She saw that the elderly guy was attempting to fly. After some attempts, he succeeded to rise, and he vanished as quickly as he came from the sea's horizon. She breathed a sigh of relief as she observed him.

a. The arrival of a strange old man at Palayo’s courtyard arouses many suspicions and explanations. Explain how the neighbour woman, Father Gonzaga and the doctor speak of the strange man. Why do you think these three people give three different kinds of interpretations?

The neighbour lady, Father Gonzaga, and the doctor all had different kinds of explanations for the old man because of their different ideological backgrounds. Another reason these three people offered three alternative explanations for him could be that the odd old man's look and actions were so unlike anything else in the real world. He possessed wings and spoke in a language no one could understand, that is why none could agree on just a single theory.

When the old man shows up in Pelayo's courtyard, many questions are raised and theories are offered. According to the neighbour lady who knew everything about life and death, he was an angel sent to take the kid, but he was slain by the rain because he was old. Father Gonzaga, the church priest, suspected the elderly angel since he couldn't comprehend God's language. After discovering a whistling sound in his heart and kidneys, the doctor was astonished to find that he had natural wings and questioned why he was the only one who was born with them. Their explanations differed from each other because of the lack of solid knowledge of his identity.

b. This story belongs to the genre of ‘magical realism’, a genre perfected by Gabriel Garcia Marquez in his novels and short stories. Magical realism is a narrative technique in which the story-teller narrates the commonplace things with magical colour and the events look both magical and real at the same time. Collect five magic realist happenings from the story and argue why they seem magical to you.

Magical realism (Magic + Real) is a storytelling method where the storyteller paints ordinary objects in a fantastic light, making them seem both magical and real. Title itself "A Very Old Man with Enormous Wings" depicts magical realism. A very old man is a real life existence and man with wings is a supernatural figure or a creature from a mythological world. In addition to this, the following instances are a few which make this story more magical to the readers like me;

Because of this, as with many of Gabriel Garcia Marquez's works, this story also falls under the umbrella of 'magical realism.'

c. The author introduces the episode of a woman who became a spider for having disobeyed her parents. This episode at once shifts people’s concentration from the strange old man to the spider woman. What do you think is the purpose of the author to bring this shift in the story?

The author's aim in making this modification to the plot is to show how oblivious humanity is to beauty and compassion. People's attention is immediately drawn to the spider lady in this episode, rather than the weird old man.

The change in people's interests suggests they prefer lighter activities over more serious ones. The crowd embraced a lady who defied her parents and became a spider. People in the vicinity seem to have completely forgotten about the appearance of the old angel. People believe she's a lot less expensive than the shy angel, and she's also a lot more entertaining for the audience.

The author also reveals how two seemingly unrelated occurrences may be linked together in a miraculous way. The story of a lady who turned into a spider after disobeying her parents is introduced by the author.

As the story progresses, we see the gullibility, ignorance and stupidity of the general populace. Instead of letting people freely see him, Elisenda thinks of charging people for 5 cents, and Elisenda and her husband make a lot of money. Pelayo and his wife generate money by selling the services of an old guy. The courtyard becomes a market as news spreads about the angel.

a. An irresistible crowd queues at Palayo’s house for many days simply to look at the strange old man. Narrate an episode from your experience or from another story where people assemble in crowds, not for any noble cause.

An irresistible crowd queues at Palayo’s house for many days simply to look at the strange old man. In our town, similar incidents frequently take place, when a person gets injured in accidents. People, leaving their own business, start gathering and making a crowd just to see the accident, though there is no noble cause.

b. The taste of children is different from grown-ups. What are the elements in the story that make ‘The Old Man with Enormous Wings’ a children’s story?

'The Old Man with Enormous Wings' is a children's story because of various factors. Children love stories specially from the magical and fantasy genre. The stories which are majorly targeted to that age group are usually written in simpler language.

The elderly man with wings, the lady who transforms into a spider, the trust in angels, etc. are the magical yet interesting characters in the story. Simple language structure and techniques like symbols are used throughout the story. The story takes place in a wet, muddy area with chicken coops, the sea, forests, and a yard, among other things which make the setting of the story more visualizable to the children.

Disputes or scuffle occurs among the many characters, including the elderly neighbour lady, Father Gonzaga, the doctor, and so on, which keep making twists in the story. The elderly guy is shown as an angel with surprising wings who seems to be neither completely human nor fully surreal in appearance. Even though he comes to rescue mankind, the elderly guy symbolises a Christ figure who is rejected and disgraced by them. Several of the five senses may be found in the story, such as the old man's sight of people, his body's filthy scent, and the emotions of the various characters and crowd. Wings in the story are also a symbol. Strength, quickness, and freedom of movement are all represented by wings. Angels are often depicted as lovely winged creatures in Christian art. The spider girl is a symbol for the erratic faith of many self-serving persons. The scenario gets amusing as people congregate in the yard to watch the elderly guy and even pay a 5 cent entrance charge to view the angel.

All the above factors make this story an engaging and interesting story for the children.