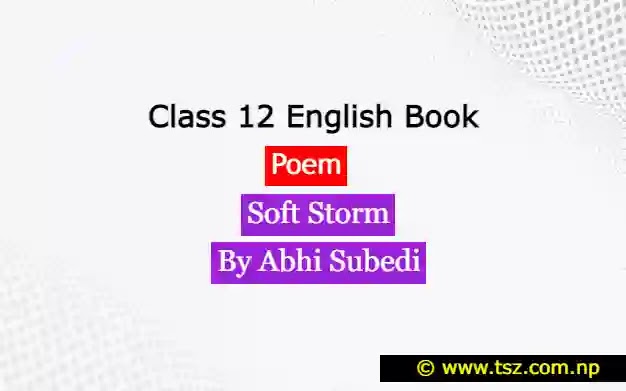 a. When does the speaker grow soft? Enlist the occasions when he grows soft.

The speaker softens as he hears uproar, the sky blooms like crocuses, the moon skids, hungry children weep, a lonesome kid looks for his mother, a man is mercilessly beaten, etc.

b. What do you understand by 'this seamless city'?

It refers to an lawless urbanized environment where people may freely wander without social disruptions or issues and enjoy the true blessings of freedom and pleasure without bias.

c. Describe the poor children portrayed in the poem.

Hunger and poverty make children weep beneath the bat-bearing trees of Keshar Mahal in Thamel. They are deprived of the constitutionally guaranteed liberties they are entitled to.

d. What do you understand about the unwedded gardens of history'?

The term "unwedded gardens of history" refers to the society's previous unflourished events, which is a metaphor for Nepal's lawless, chaotic state as a result of sociopolitical dominance.

e. Why was the forlorn child wailing?

A forlorn child was wailing because because he found his mother and other kins and dear ones missing in the contemporary society.

f. What do you understand about 'soft storm'?

Soft Storm means the speaker's troubled emotions which are not violent. "Soft storm" is used to describe the society's lawlessness and chaotic environment. In the context of today's society, a storm is a metaphor for the turbulence and uncertainty that the poet sees in the contemporary society.

g. Why does the speaker call our time 'mad time'?

The speaker refers to our period as "mad time” because he discovers corruption, bias, political and social inequality, cruelty, and environmental devastation everywhere.

h. What does the speaker want to do during his "Hard times"?

The speaker wants to fade like a rainbow at "Hard times."

a. The poet uses the word 'soft' with the words like 'storm' and 'gale', which generally refer to disorder and violence. What effect does the poet achieve through the use of such anomalous expressions?

An anomalous phrase is a syntactically correct but semantically meaningless utterance. The most famous examples are 'soft storm' and 'softness surged like a gale'. To convey his inner feelings and realisations in today's restricted culture, he unites two opposing notions. Through this method, the poet gains psychological, social, and environmental benefits.

b. How does the speaker feel about the historical period he describes?

The speaker's perspective on time is skewed since he can't think of any specific human activities that take place at certain times. At night, when the moon shines in the sky, it casts a shadow or is less brilliant than the brightly shining Sun. Wherever he expects things to happen, he encounters difficulties. As a result, the speaker seems to have a negative outlook on the passage of time throughout the poem.

d. What is the speaker like? A rebel? Why? Why not?

The speaker seems rebellious. He is waiting for the right moment to rebel, but his inner nature is distrubed by the circumstances like social, familial, political, and environmental. In the poem, he seems to oppose authority and violate norms, yet his rebellious attitude is gentle and repressed.

speaking in the earth’s ears

in the far corner

of history and dreams

These lines describe a guy with bloodstained clothing and wounded lips who is unable to speak because his voice is suppressed. The lines depict the plight of the underprivileged and downtrodden.

a. Write an essay, highlighting your dissatisfaction towards social, cultural, economic and political issues prevailing in Nepal at present.

I'm dissatisfied with many aspects of today's society, including gender inequality, discrimination against women, the trafficking of girls, violence against women, and more.

I reject this multiparty democratic system that is not based on the rule of law and human rights, which are merely referred to in the constitution as "independence," "freedom," and "fairness," and which only exists on paper. Those in charge of the country's politics are basically playing dirty politics, disrespecting the constitutional rights of the people.

Nepotism and favouritism are rampant, and the whole system is riddled with them. A quarter of Nepal's population is still living below the poverty level despite UN forecasts that poverty is decreasing. There are disparities in Values and Customs.

A large segment of Nepal's population is unable to engage in public events and attain social and cultural equality because of the country's economic and social conditions, social shame, and restricted access to education.

This country's social system is something with which I strongly disagree. Dalits, the most disadvantaged group in the caste system, are particularly affected by the lack of economic possibilities and restrictions they face as a result of their status.

b. Assume you're a rebel seeking to transform society by eradicating social injustices and inconsistencies. A speech articulating your vision for change should be written.

Respected ladies and gentlemen, and my dear friends!

Greetings! I'm Shriram Lamichhane, and I'm here today to speak out against the plethora of social ills that are stifling our country's progress.

Though we are in modern society, there are many widespread societal ills, including drunkenness, racism and child abuse. The caste system, child labor, underage marriage, illiteracy and gender inequality are just some of the socioeconomic ills that Nepal is dealing with.

One of the socioeconomic problems is illiteracy. It is our responsibility as educated individuals to raise awareness for increasing the approach of education among the ignorant population.

Secondly, there is the problem of child labor and child marriage. Without education, a youngster is like a bird that has no wings. In today's environment, if your kid does not have a decent education, he or she may encounter many difficulties. There is an ideal time and place for any endeavour. Encourage your children to study until they are ready to begin working.

Classes were established by our forefathers thousands of years ago, based on the occupations of their people. The most oppressed of them were the Sudras, who were the lowest of the low castes. People weren't even permitted to enter the temples.

The issue of poverty must be addressed as soon as feasible. There are three main factors that contribute to poverty: illiteracy, caste, and unemployment. Training for the jobless should be provided by the government.

Inadequacy in hygienic conditions is another societal blight. Every citizen has a responsibility to clean up our nation.

Inequality between men and women has become another problem. The narrow-mindedness of society is to blame for both of these tragedies.

There is much work to be done in order to rid our society of the last vestiges of the social ills that still exist. We must educate the public in order to address all of the problems.

All of these ills are intertwined. To combat these societal ills, we need to be educated in the appropriate way with morals and ethics. The government has to act more effectively and strive to eliminate these issues from the public discourse.

I'll wrap things up here. Everyone, thank you, and I wish you all the best in your efforts to rid society of these social ills as quickly as possible.