Summary of Marriage as a Social Institution by Stephen L. Nock 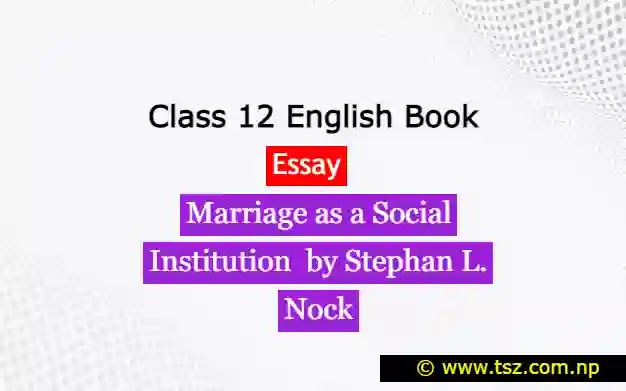 Also Read: Exercise of Marriage as a Social Institution by Stephen L. Nock

Summary of "Marriage as a Social Institution"

In 'Marriage as a Social Institution' by Stephen L. Nock essay, the author examines the national marriage debate by reviewing the social and demographic trends that have changed the role of marriage and the family. He views that marriage and parenthood are private matters, relevant only to the individuals directly involved. He points out the various programs that have strengthened marital relationships, lowered divorce rates, reduced out-of-wedlock births, and encouraged responsible fatherhood.

Marriage as a social institution is a politically and socially contentious topic in the essay, and it is examined carefully as a major social structure that impacts males. Writer asserts that the position of spouse has a special significance in men's life. The institution of traditional marriage helps men develop their manhood as they get older. In a marriage, a guy grows, maintains, and shows his masculine identity.

Marriage is the union of two people who are legally, morally, and socially linked by various personal and societal connections. Husbands as the household's leader, fidelity/monogamy, and parenting are all characteristics of a normal marriage. Couples react to each other, culture, society, and the rules and values that define them as a unit since they are life partners. Married males, in particular, had greater physical and mental health than married women.

In terms of fundamental aspects of accomplishment, involvement in public social life, well-being, comfort, luxury, and swagger, marriage transforms men.  It's a framework modeled after other institutions like the family, education, economics, law, and politics, among others.

How is Marriage defined as a Social Institution in Essay?

Marriage is an institution. The connection between married couples is governed by rules, and they coexist within flexible parameters to follow the same patterns in different ways. Marriage differs from all other types of partnerships in that it has soft boundaries—allowable limitations on actions. Such an institution separates married couples from all other types of relationships. They become a part of a huge system of well-understood concepts that assist in organizing and maintaining human existence.

Stephen cites French sociologist Emile Durkheim to back up his point (1858-1917). Emile believes that marriage keeps him from committing suicide by legitimizing his aspirations for well-being, comfort, luxury, and affluence. Marriage improves men's civic virtues and helps them discover their life's purpose. People who are married are less likely to commit suicide than those who are single. Marriage is an effective way to rein in one's irrational longings and wants. Marriage binds a man to the same woman for the rest of his life in order to satisfy his desire for love, which provides moral balance to his life. Dr. It's crucial for male to get married because it gives them direction in life and helps them achieve their goals.

Today, Live- in together type of marriage also called as 'Unmarried cohabitation' is on the rise. But their relationship is not generally and legally recognized since they do not follow normal beliefs, limitations in conduct, no responsibility to each other, no identity and no institutional relationship. Cohabitation without marriage is when two individuals aren't married but yet live together. They don't boldly identify themselves as husband and wife. As a result, it's on the rise because couples may live in harmony and happiness without being bound by the rules of marriage, enjoy great freedom of choice, and are exempt from a broad range of conventions and regulations. A married pair conforms to patterns, conventions, and rules as husband and wife and receives acceptance from everyone. There are laws, religion, and customs protecting their relationship.

Social norms and penalties (honor, prestige, etc.) support these networks by making some behaviors easier while constraining others. Individuals with high social capital are inserted into networks that spread widely valued knowledge and information. It establishes a connection based on reliability and trust. Social capital has advantages for the individuals who possess it. The couple meets new blood relatives. The institution of marriage is a personal asset, but it is more difficult to maintain since it only exists through relationships with others.But marriage also functions as social capital. There is an obligation to assist and support one other when we are in need. The foundation of the new partnership is built on mutual trust and belief. It establishes relationships amongst people.

Because of the weaker borders, marriage varies fundamentally from other kinds of relationships. This is due to the fact that mature people have distinct normative marriage standards.

Word Meanings of this essay

heir (n.): a person with the legal right to receive property or money when the owner dies

impulses (n): sudden urge to act without thinking about the results

transgressing (v.): going beyond the limits of (what is morally, socially, or legally acceptable)

cohabitation (n.): the state of living together and having a sexual relationship without being married

bolster (n.): a thick pillow shaped like a long tube

intangible (adj.): that cannot be easily or clearly understood

normative (adj.): describing or setting standards or rules of language or behaviour which should be followed

Who is Marriage as a Social Institution Author, Stephen L. Nock?

Steven L. Nock (March 11, 1950 – January 26, 2008) was a researcher, author, and the Commonwealth Professor of Sociology at the University of Virginia. He wrote extensively on the role of marriage in society, and worked in the Federal Department of Health and Human Services as a consultant on American family policy.

He authored textbooks and articles about the causes and consequences of change in the American family. He investigated issues of privacy, unmarried fatherhood, cohabitation, commitment, divorce, and marriage. His book, Marriage in Men's Lives won the William J. Good Book Award from the American Sociological Association for the most outstanding contribution to family scholarship in 1999.