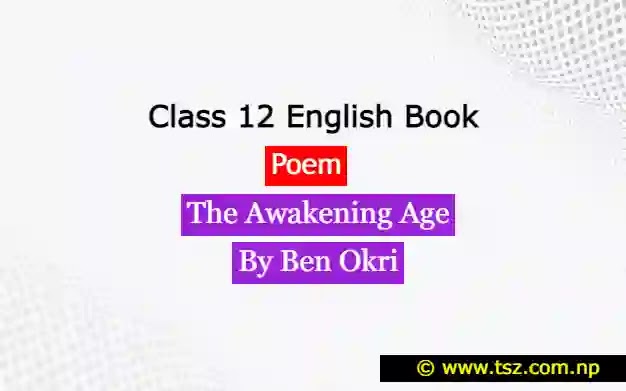 a. Who are the people 'who travel the meridian line?

Ans :- The people “who travel the meridian line are the Nigerians who have come together after Nigeria's long civil war, which split the country into two halves: north and south.

B. What does the poet mean by 'a new world?

"A new world" in the poet's view is one that is filled with peaceful happiness as well as a sense of oneness, truth, knowledge and creativity.

C. How are people connected to each other?

People are connected to each other by the hope of achieving peace, harmony and unity.

d. What can we gain after our perceptions are changed?

Once we change our perspectives, we may achieve more harmony, equality, prosperity, and a sense of brotherhood and sisterhood.

e. How are we benefited by new people?

We can be benefitted by new people because of their open minded thoughts and innovative ideas. New people are above any sort of discriminations, rages, angers, and hatred to each other. Their innovative thoughts and creativity helps to awaken people from pains and sufferings. Such people are certain to make Nigeria a prosperous nation according to the poet.

f. Describe the rhyme scheme of this sonnet.

The rhyme scheme to this sonnet goes like this: AA BB CC DD EE FF GG. It is a Monorhyme, where every line has the same rhyme scheme and a couplet. It adds rhythm and a lovely musical tone to the poem, making it more interesting.

a. What does the poet mean by 'the awakening age"?

“The Awakening Age" (1976-1970) was the period immediately after Nigeria's civil war, which was precipitated by ethno-religious violence and the inti-Igbo movement in Nigeria. The poet sees the African people as they go through a variety of difficulties in life. Because of this, he advocates for a world of peace, wealth, happiness, emancipation, and oneness. He aspires to awaken the whole world and its inhabitants to the “awakening age” of enlightenment from a world of darkness and poverty.

b. Why, in your view, have these people ‘lived with poverty's rage'?

In my view, these people have lived with poverty's rage because they are tortured, suppressed and provided many hardships to accomplish for living in the community. They express such a rage to do much suppression over them.

c. Why does the poet appeal for solidarity among the people?

The reason for the poet's appeal for solidarity is to bring equality, freedom and sentiments of fraternity, justice, togetherness and harmony among people. Liberation and liberty for the people are impossible without a single, united warriors. So, a call for unity is made by the poet, because he hopes that the people would band together to overcome their trials, hurdles, and pain.

d. Does the poet present migration in a positive light? Why? Why not?

In the poem "The Awakening Age," the poet portrays migration in a good light because their innovative thoughts and creativity helps to awaken people from pains and sufferings. They have a good outlook because they are on the correct path. Such people are certain to make Nigeria a prosperous nation according to the poet.

e. Nepal is also known for its economic as well as educational migrants. Have you noticed any change in the perceptions and behaviours of these migrants when they return home from abroad?

Nepal's economic and educational migrants are well-known. It's true that these migrants' attitudes and behaviour alter when they return from a foreign country. They've got money and a little bit of know-how.  Like the migrants like Sanduk Ruit who have returned from India after gaining the speciality in eye operation, we've seen a variety of shifts in people's behaviour and business practises.

f. Relate the rhyme scheme of this sonnet to the kind of life idealised by the poet.

Each line or stanza ends with a rhyme scheme that repeats the same sound pattern ie. AABB CCDD EEFE GG. Every line rhymes, and the couplet is a monorhyme: The poem's speed and lyrical tone are aided by music. It is the poet's hope that this well produced poem with proper rhyme schemes would help to bring about global peace. To represent idealized people's lives, the poet utilizes rhyme to arouse the audience.

Write an essay on 'The Impacts of Migration on Nepali Society :

Scientific and policy disputes in Nepal centre on the impact of emigration on the country's economy. An ever-growing number of people are moving to Terai and plain areas to better or safeguard their livelihoods.

A variety of causes, such as educational purposes, enjoyment,  poverty, and tragedy, might lead people to leave their homes. Migrating people in the central hills of Nepal have a variety of effects on the people who stay, their livelihoods and the way they manage land.

In addition, it has a favourable effect on people's lives. People's quality of life improves as a result of migration. It improves people's social lives by exposing them to a new culture, traditions, and languages, which fosters a greater sense of community. Economic development in the area is boosted by the emigration of highly trained employees.

On the other hand, Increases in population have a negative impact on existing social institutions; an increase in demand for goods and services; the displacement of citizens from rural and urban occupations; a decrease in the sanitary environment; and an increase in pollution in urban areas as a result of migrant populations. greater reliance on remittances; inefficient use of natural resources, such as farmland; wasteful spending; and so on.

Also Read:Summary of The Awakening Age by Ben Okri