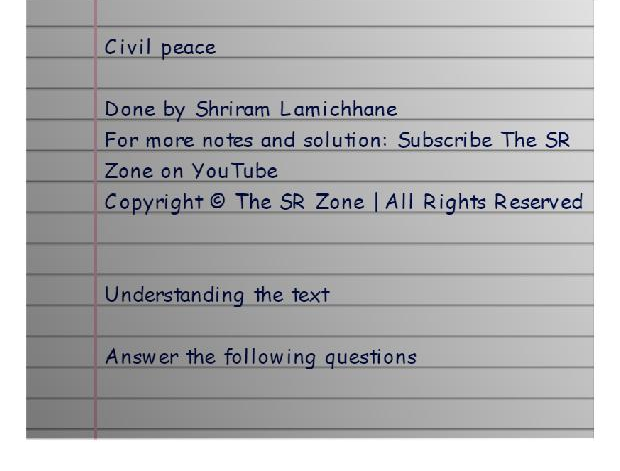 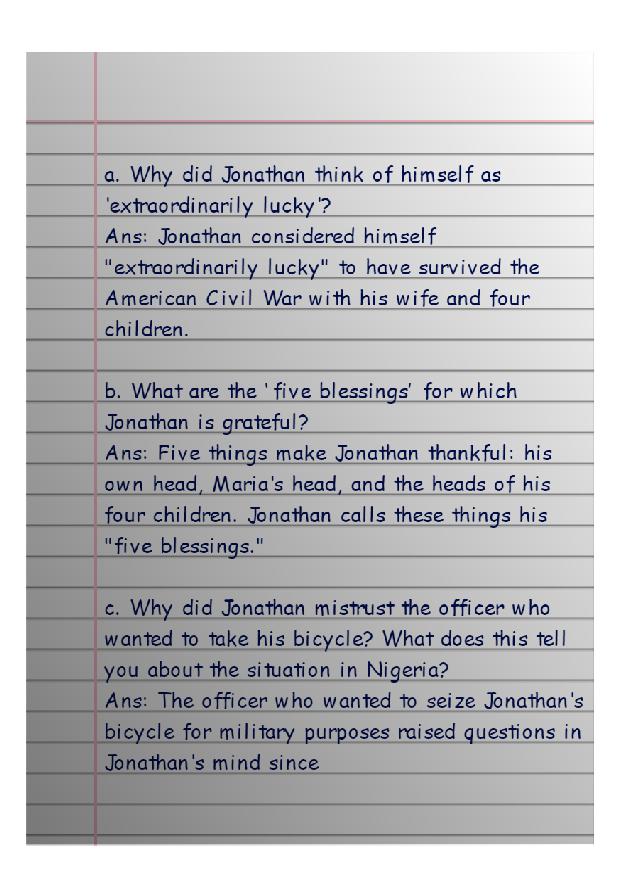 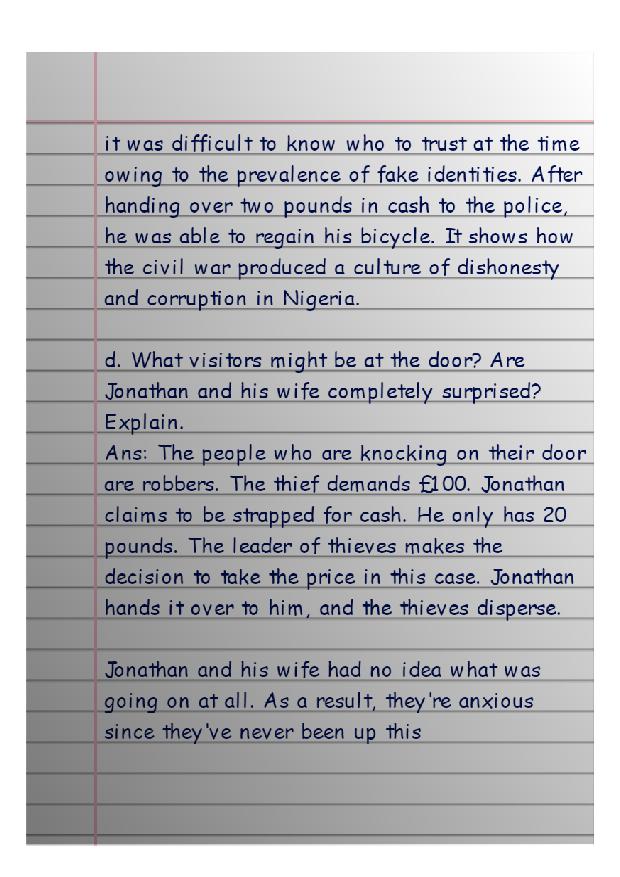 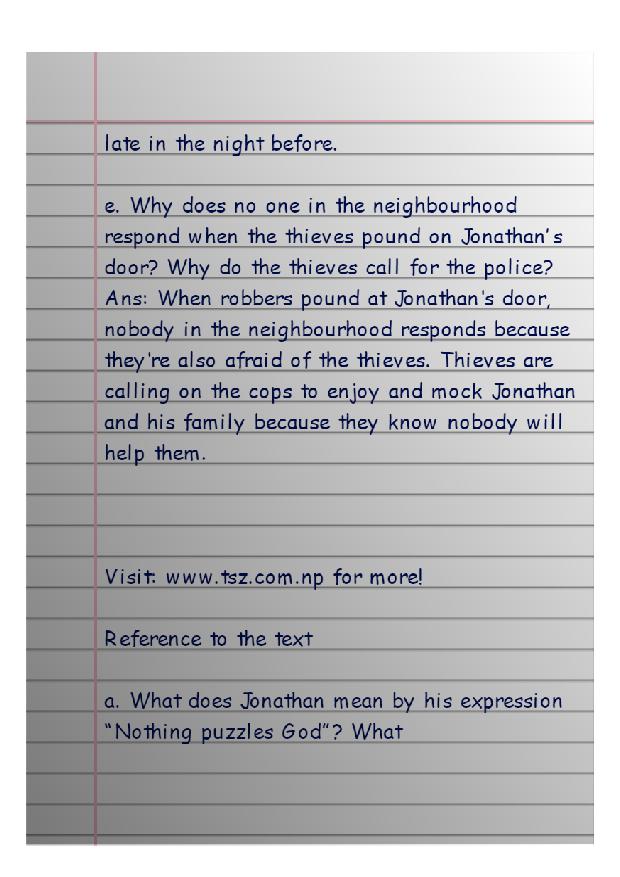 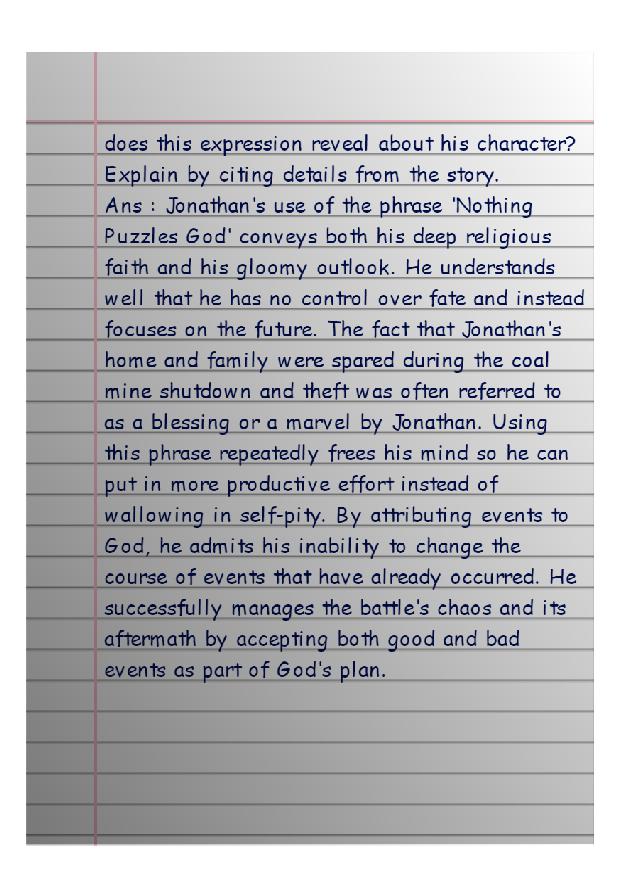 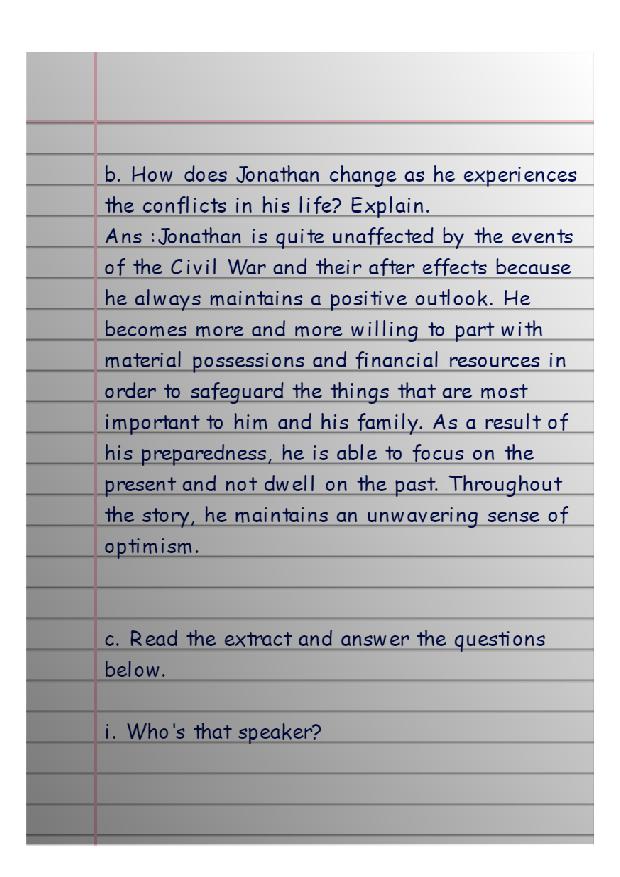 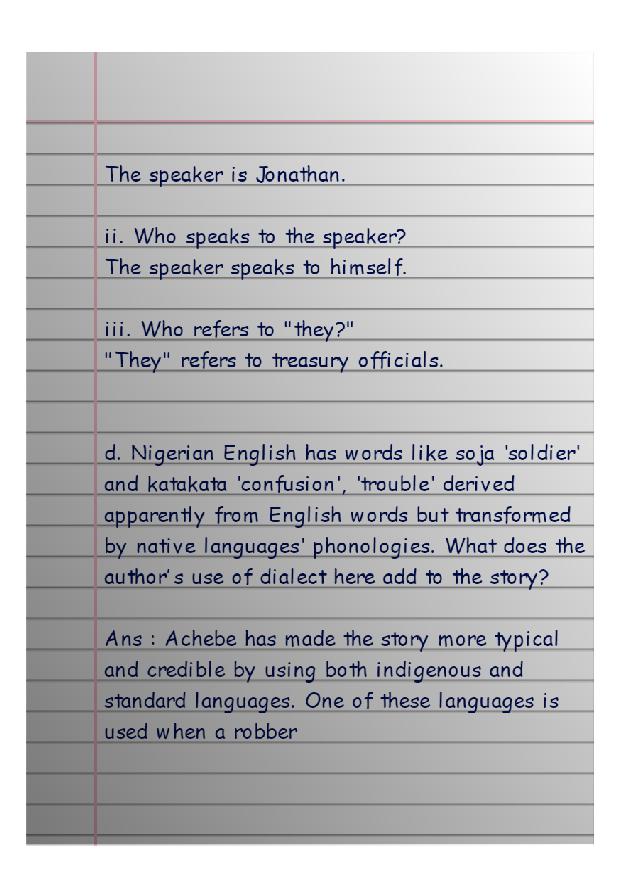 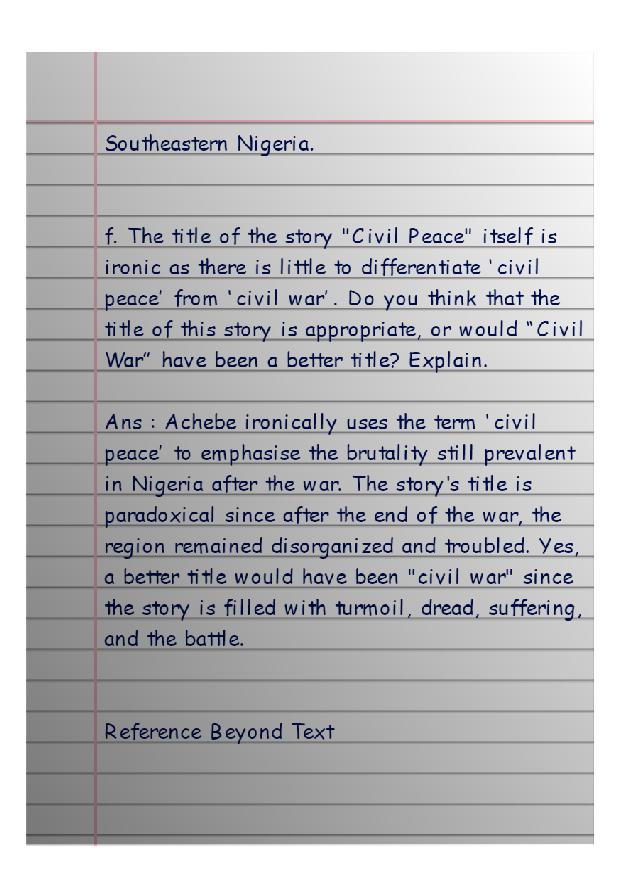 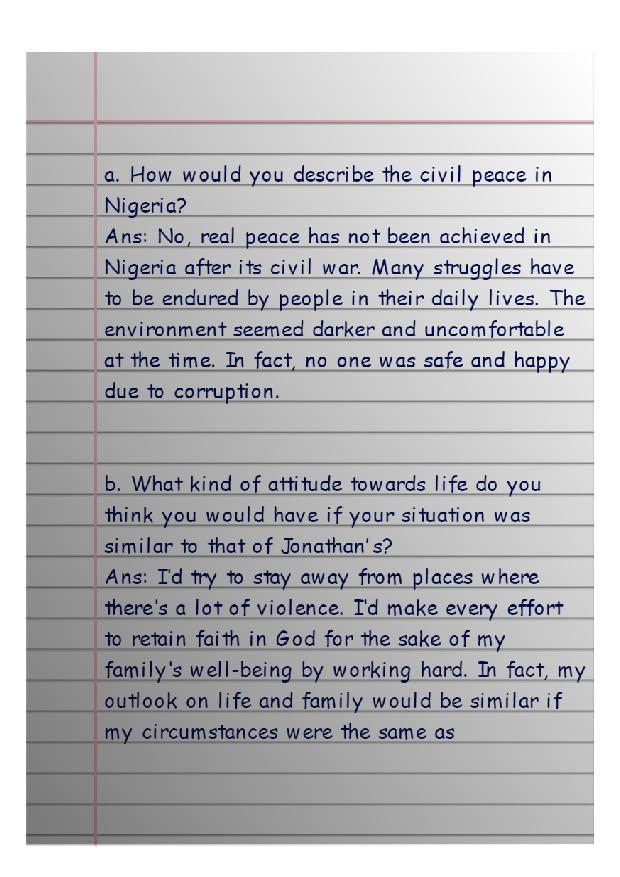 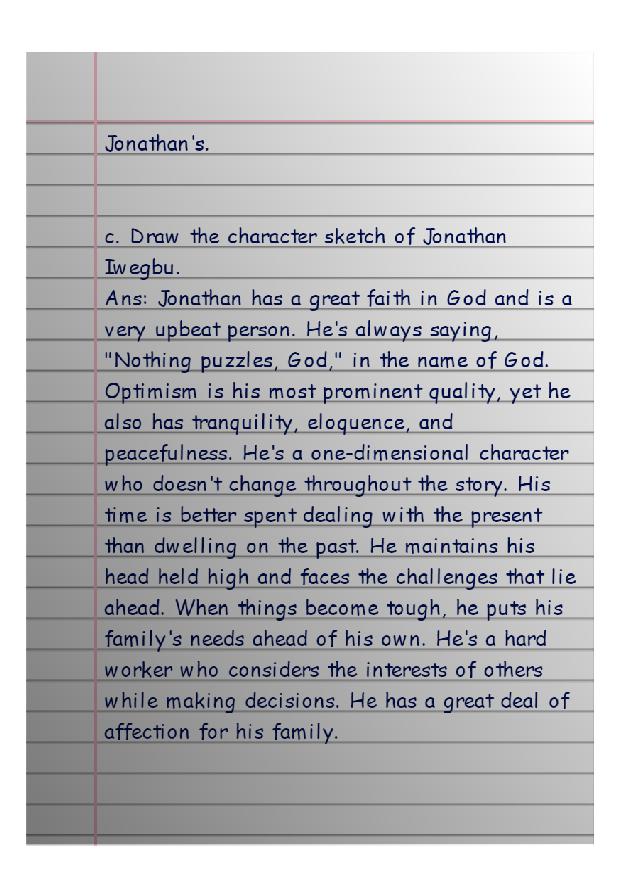 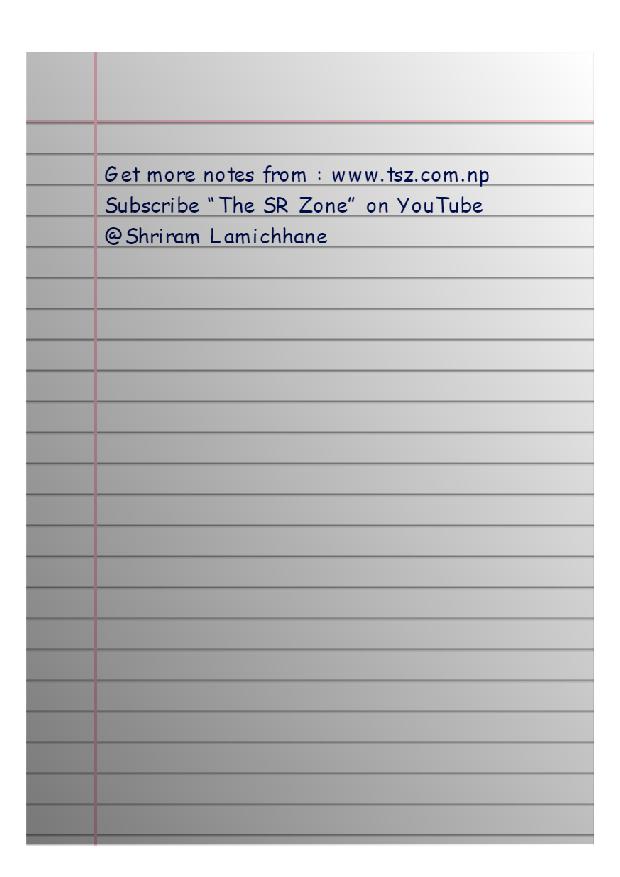 The story "Civil Peace" by Chinua Achebe depicts the post-Civil War situation realistically. It's about the effects of the Biafran civil war on Nigerians.

Jonathan Iwegbu, the story's main character, considers himself very fortunate to have lived. He was very fortunate to god for saving him and his family during war, including his wife Maria and three of their four children. As an added bonus, he had brought his bicycle after the battle had ended. The military commander tried to take this bicycle, but he was able to get it back for two pounds. He earns very little money from this small business which hardly helps in the living of him and his family.

The Nigerian civil war has left its mark on this family. Afterwards, Jonathan goes to Enugu in search of his old family's house and discovers that it's still intact even though other buildings in the area have been destroyed around it. He realized the house needed some work, so he collected the necessary supplies and hired a carpenter to get it back to looking like a house.

After that, he returns to his home and his family. The whole household works long and hard hours in order to supplement their little income and start again.

Jonathan’s profession as a miner having been eliminated, he decides to open a pub in his home for troops. He is given an egg rasher for handing over 20 pounds in rebel money to the treasury.

One night, some robbers in huge groups come up at his home and want a ransom of 1000 pounds (around $1000). Jonathan was terrified, as were his wife and offsprinfs. They requested assistance from the police and their next-door neighbour but no one responded.

Finally, Jonathan admitted that he didn't have a hundred pounds and stated he had a total of twenty pounds in his possession. The thief's leader agreed to take the same amount of money he had. The following morning, neighbours came over to offer their condolences, but Jonathan and his family were not there to receive them.

They'd just finished their job for the day. Since God doesn't seem to be bothered by theft, Jonathan's life carries on as normal.

Jonathan is smart and also knows how to get things done. When a military officer took Jonathan's bike, he brought it back by giving the officer two pounds. He also gladly gave twenty pounds to keep thieves from killing his family.

"Nothing puzzles God" is his motto. The same sentence is used in both situations. Everything in life is a bonus for him. He was so happy that he survived the war. Since he always looks on the bright side of things, the return of his bike is another miracle for him. He starts a new life at home with only a few things. He looks on the bright side and is happy with what he has. He has full faith in God and works hard in both situations.

a. Why did Jonathan think of himself as 'extraordinarily lucky'?
Ans: Jonathan considered himself "extraordinarily lucky" to have survived the American Civil War with his wife and four children.
b. What are the ‘five blessings’ for which Jonathan is grateful?
Ans: Five things make Jonathan thankful: his own head, Maria's head, and the heads of his four children. Jonathan calls these things his "five blessings."
c. Why did Jonathan mistrust the officer who wanted to take his bicycle? What does this tell you about the situation in Nigeria?
Ans: The officer who wanted to seize Jonathan's bicycle for military purposes raised questions in Jonathan's mind since it was difficult to know who to trust at the time owing to the prevalence of fake identities. After handing over two pounds in cash to the police, he was able to regain his bicycle. It shows how the civil war produced a culture of dishonesty and corruption in Nigeria.
d. What visitors might be at the door? Are Jonathan and his wife completely surprised? Explain.
Ans: The people who are knocking on their door are robbers. The thief demands £100. Jonathan claims to be strapped for cash. He only has 20 pounds. The leader of thieves makes the decision to take the price in this case. Jonathan hands it over to him, and the thieves disperse. Jonathan and his wife had no idea what was going on at all. As a result, they're anxious since they've never been up this late in the night before.
e. Why does no one in the neighbourhood respond when the thieves pound on Jonathan’s door? Why do the thieves call for the police?
Ans: When robbers pound at Jonathan's door, nobody in the neighbourhood responds because they're also afraid of the thieves. Thieves are calling on the cops to enjoy and mock Jonathan and his family because they know nobody will help them.