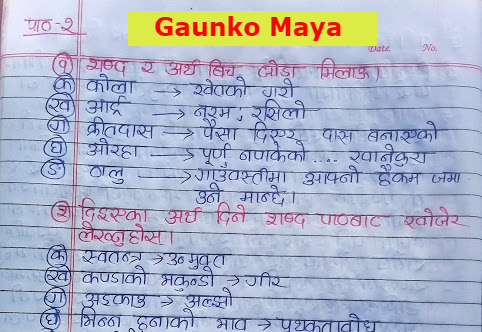 'Gauko Maya' is a typical Nepali Story (katha) written by Ismali that is included in Chapter 2 of CDC's class 11 Nepali book. 'Gauko Maya' is a Nepali word that is translated from English Phrase ' Village's Love'. So, the main theme of this story is about the love of a person to his village. Detailed Summary is provided today because this story was written in the traditional Nepali language. Gauko maya exercise Solutions are also provided to assist you in performing questions answers asked in the exercise.

Notes are done by Shriram Lamichhane!

Gau ko maya is an excellent social story structured in the rural social environment and surroundings of the Midwest Terai. The protagonist of this story, Krishna, has to stay away from his homeland. On his way back home after two years, he has felt the pain of being away from their homeland. The dialogue between the characters make the story more interesting.

In this story, "Sahumahajan, Thalu" , a landlord who feeds the rural simple citizens, adopts the British policy of taking advantage of poverty and ruling. The main theme is class discrimination and the exploitation of the underprivileged by the privileged. This story seeks to portray the fact that the oppressed class must unite for the liberation of the proletariat, and that education or consciousness is the basis of social change. Returning to the village after about two years, main character Krishna is walking towards the village remembering his friends, relatives and many childhood incidents.

Krishna has felt the pain of leaving the village. Remembering the letter sent by his brother, he thinks that the youth are gradually awakening and the villagers are beginning to appreciate the value of life. They want change so that something can happen in their village. In the letter, Parichan complains that krishna has become a big man and if he has stayed stayed in village, they would have got a chance to know a few things.

In the journey, kirshna meets Parichan, who is plowing the field. He remembers the childhood activities spent with Parichan. The villagers sent krishna to study as Krishna is clever and quick to pick things up. They urged him to have a better future. The fact that the ancestral work of the poor and the ritual of being a shepherd's plow is traditionally handed over to the descendants also applies to the fact that it applies to the children of the family.

Wiping away the sweat, he remembers the past days of going to the river to fetch water. He remembers the character spending the last half of his life grazing and playing in the river. The love of the homeland melts away. The so-called Sahumahajan and Thalu exploiters and feudal lords seem to have divided and ruled the poor villagers of the impoverished proletariat by adopting the British policy of divide and rule.

The feudal thinking is that the poor will always be poor, destitute and uneducated. They know that there are three parties in the village. Seeing the awakening of consciousness in the environment has become unbearable for the so-called Thalu.

Feudal thinking is found in Thalu that the Parichans should remain parichans, should be plowed shepherds and should be favored. During the strike over the issue of four kilos of bunny, the work was halted for three days but it was Fekan and Shanichar who led the movement. It seems that the rich people tempted them to give them four manas of paddy and sold the movement. Later, when they did not get more than one mind, they have formed a separate party which depicts how the rich fulfill their selfish interests by dividing the poor. The facts are indicated.

Due to lack of education and consciousness, the citizens of the proletariat are still enslaved by the Sahu Mahajans and Thalus and no matter how many movements for liberation, the leadership has betrayed the party. And despite the law, the destiny of the poor has not changed. The poor have to live a life of slavery as a result of a lack of consciousness, a lack of value for labor, and suffering.

The standard of living will not change unless the poor citizens unite and raise their voices for rights and liberation. Expecting help from Krishna, whom Parichan had read, seems to have made him realize the importance of education.

Krishna's sense of responsibility towards the village means that an educated person should be involved in the development of his village, have power not in feet, but in personal interests for the benefit of the class, make the motherland his work place, and education is the basis of change.

Hope these Gauko Maya Notes and summary is helpful for you.