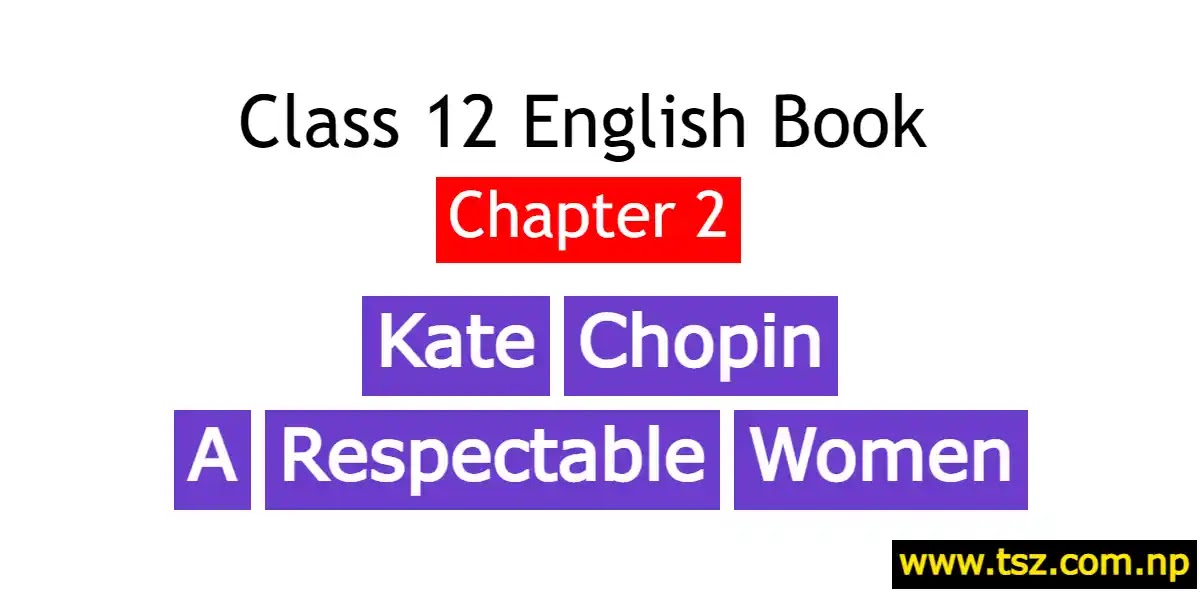 The short story ‘A Respectable Woman is structured around the character of Mrs. Baroda and her inner conflict as she finds herself attracted to her husband's friend. The conflict follows the pattern of classical fiction and moves from exposition to rising action and then to climax and resolution.

How does the title match the story " A Respectable Women"?

Mrs. Baroda is shown as such a lady who wants to live up to her standards of being a respectable woman in every way she can. But, the story takes us somewhere else when we reach the conclusion of the story.
Unfortunately, towards the conclusion of the story, her words and actions only lead us to think that she was going to go against her values rather than supporting them.
What made her do so?  We will talk all about it in this article.

When Mrs. Baroda learns that her husband's friend Gouvernail is going to spend a week or two at their plantation, she becomes a little upset. After all, they had been busy all winter, and she had hoped to use the time to relax and talk with her husband Gaston Baroda, and have some good time with him.

She has never met Gouvernail, despite the fact that she is aware that Gouvnernail and her husband were friends in college and that he is now a successful journalist. She has a mental image of him as a tall, slender, and cynical guy, and she does not care for this mental image.

A paradoxical thing happens after that. When she meets Gouvernail, who is slim but neither tall nor cynical, she discovers that she really likes him.

Mrs. Baroda wonders why she loves Gouvernail since he makes no special effort to impress her in any other way, She does not recognize any of the good characteristics mentioned by Gaston as being there.

He loves sitting on the field and listening to Gaston explaining sugar plantation methods. He does not seem to be very bright, but he does appear calm and polite.

Mrs. Baroda finds Gouvernail to be a little confusing, yet she finds him to be charming and unoffensive. Unlike what she had thought of him, she finds him way better than she expected.

She first leaves him alone with her husband, but she soon starts to join him on walks as she tries to overcome his solitary habits. Gouvernail behaved quite simply and didn't pay much attention to Mrs. Baroda. Mrs. Baroda found various deficiencies within him.

Her husband informs her that he will be staying for another week and inquires as to why she does not want him to remain longer with her. Mrs. Baroda expresses surprise at Gaston's arrival, by saying that she expected him to be more fascinating. Gaston finds it amusing that she replies by saying she would like him to be more interesting.

Later that night, she sits alone on a bench, feeling befuddled and wanting to get away from the plantation for a time. She has informed her husband that she intends to go to the city in the morning and stay with her aunt while on leave.

Meanwhile, Gouvernail entered and took a seat next to her. On Gaston's behalf, he presented her with a scarf. He began to speak about the night, the olden days, and his preference for calm existence.

For the first time, Mrs. Baroda saw him talking. She didn't pay attention to his words, but she was drawn to the tones of his voice. She longed to extend her hand towards him and place her delicate fingers on his face or lips. She wanted to kiss his cheek and mumble something sweet. She kept her cool, however. Her self-respect as a respectable woman and housewife kept her from making this awful blunder. She rose up and walked away from the scene.

Mrs. Baroda wants to inform Gaston about her odd misadventure, but she recognizes with a maturity that she must deal with this emotion on her own.

She goes for the city the next morning and does not return until Gouvernail has left the city.

Despite Gaston's best efforts, Gouvernail refuses to come back the next summer. In the end, she changes her mind, much to the pleasure of her husband, who informs her that Gouvernail did not deserve her unreasonable dislike in the first place.

She tells her husband, adding that she would now treat him with greater hospitality. And The story ends here.

There is no assurance at the conclusion of the narrative; we don't know if she will choose her emotions or overcome them. In this manner, Kate Chopin challenges us; being respectable entails adhering to societal conventions or living a life free of regret.

cynical (adj.): concerned only with one's own interests

portico (n.): porch leading to the entrance of a building

Corinthian (adj.): having the characteristics of Corinth in ancient Greece

velvety (adj.): having a smooth, soft appearance, feel, or taste

batture (n.): an alluvial land by a riverside, especially in low land area

mabelle (adj.): French word, equivalent to my beautiful in English

cravat (n.): a short, wide strip of fabric worn by men round the neck inside an open necked shirt

temptation (n.): a desire of something wrong or unwise

About Author of A Respectable Woman Story; Kate Chopin

Kate Chopin, original name Katherine O’Flaherty (1851- 1904) was an American novelist and short-story writer. She was born and brought up in St. Louis and lived in New Orleans after getting married to Oscar Chopin.

Her first novel At Fault appeared in 1890 and the second the novel The Awakening in 1899. She wrote more than 100 short stories and among them, ‘Desiree's Baby’, ‘Madame Celestin’s Divorce’ and ‘A Respectable Woman’ are more anthologized than others.

The language in her novels and short stories is full of sexual connotations and her novel The Awakening was condemned for its sexual frankness and the publishers had refrained from publishing it.

Later after 1950, her works were reinterpreted and she was praised for depicting modern sensibility. The story ‘A Respectable Woman’ is taken out from her collection The Awakening and Other Short Stories (2005).