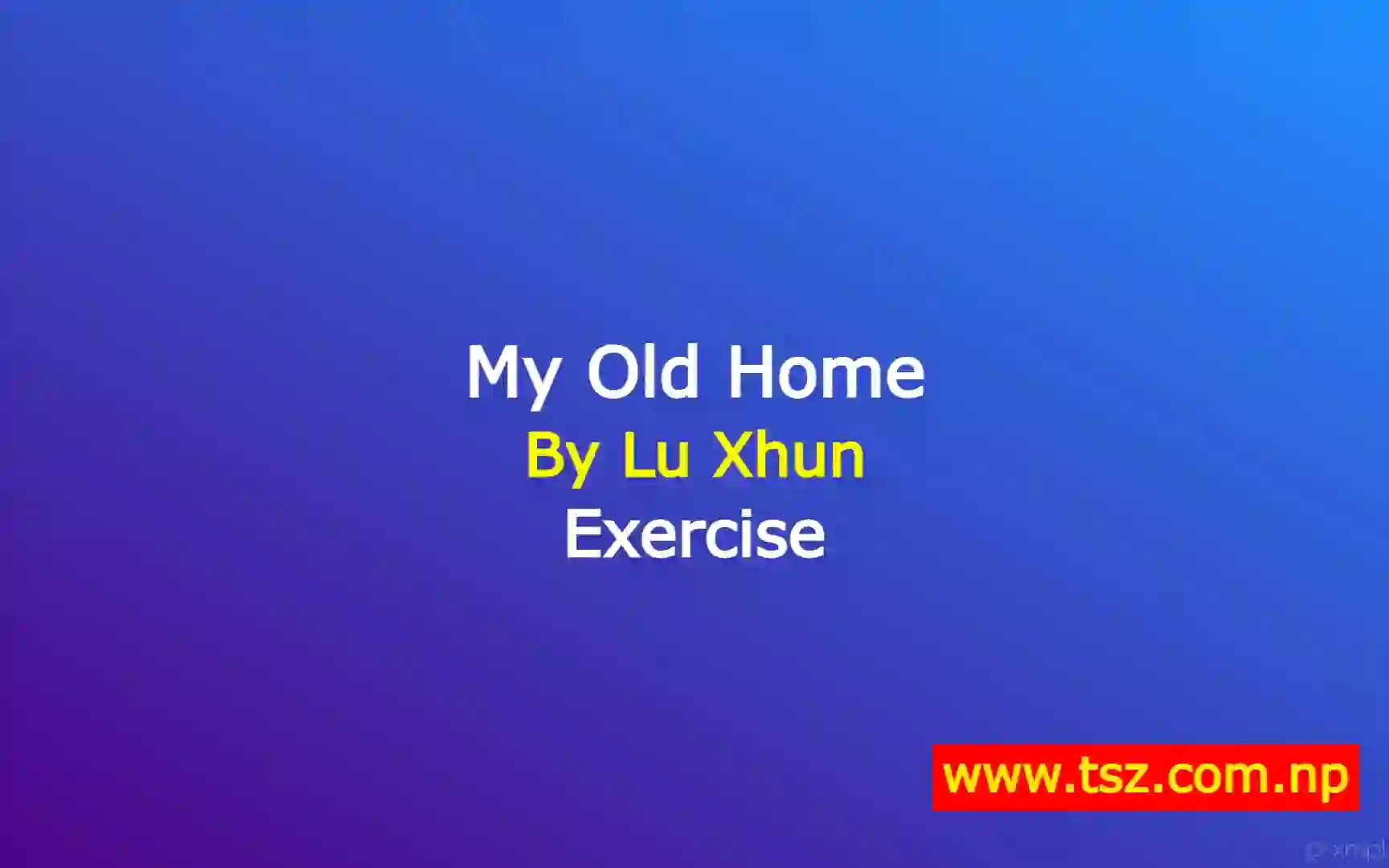 a. How does the narrator describe his feeling at the arrival of his old home?

= The narrator feels the mixed and blended emotions after the arrival of his old home. He feels happy and nostalgic to see his beloved old home but at the same time, he feels sad for leaving it forever. When the narrator realizes that nothing has changed around him, he becomes nervous. He's been expecting development in his hometown.

b. What were the three kinds of servants in China then? What does it indicate about contemporary Chinese society?

= There were three kinds of Chinese servants: dailies, yearlongs and busy-mothers. First are day workers, sometimes known as short-timers. Yearlongs are people who work for the same family all year or more. Finally, Busy-mothers were landowners who only worked for one family at a time, such as around New Year's festivals, or when rent was due to pay.

The kinds of servant in former Chinese society implies that there was a slavery system and a trend of dividing the work on the basis of level.

c. What makes the narrator nostalgic? What did he do with Runtu in his teenage years?

= The narrator gets nostalgic when his mother asks him to meet up with Runtu.

Runtu was the childhood friend of the narrator. He spent a lot of time with Runtu as a teenager, playing in sandy fields and doing various activities together. That is why, As soon as his mother asks him to meet up with Runtu, the emotions flood back and he feels nostalgia.

d. How did Runtu hunt a Zha in his young age?

= Zha was a creature which used to eat watermelons. Runtu used to stand watch over watermelons on the beach to protect from Zha. He suddenly and fiercely attacked Zha with his knife, using all his strength in his young age.

e. How does the narrator make a humorous picture of Mrs. Yang?

= The narrator's amusing descriptions of Mrs. Yang creates a humorous image of the character. With narrow cheekbones and lips, he depicts her as the face of two compasses in a geometry box when he sees her. He also recalls "A Beancurd Beauty" was the name she was known in past, because of her, the shop used to have a good number of customers.

f. According to the narrator, what were different factors that made Runtu a poor man throughout his life?

= According to the narrator, the different factors that made Runtu a poor man throughout his life were societal divisions, obligations, discrimination, lack of opportunities, very feeble economic background and aristocracy.

g. How does the narrator help Runtu before leaving the old home?

h. How does the author differentiate two kinds of idols?

= Hindu readers will be reminded of the relationship between Krishna and Sudama when reading about the narrator's connection with Runtu.

- Krishna and Sudama were pure friends from their childhood, like the narrator and Runtu in this story.

- Lu Xun helped Runtu in the end by offering a variety of culinary needs, just as Krishna had helped Sudama by transforming his hut into a luxurious home with every comfort.

Both of the stories entail that "A friend in need is a true friend". Wealth status and the economic level cannot hamper the hearty relationship of two intimate friends, if the friendship is not fabricated.

b. How does the story support the proposition that the relationships of childhood are innocent, impartial and disinterested?

The story supports the proposition that the relationships of childhood are innocent, impartial and disinterested via the example of Runtu’s and the narrator’s intimate friendship.

A master/servant relationship existed between Lu Shun and Runtu.  Throughout the story, Xun and Runtu's friendship is shown to be pure, neutral, and disinterested. They interact without regard for master and worker. Their relationship transcends societal boundaries. Their bond is so holy that no socio economic divisions exist. In their adolescence, we see them having fun and freely discussing their thoughts.   They are oblivious to the so-called social class inequalities. They are unbiased. They cherish every minute of innocence. We only discover their actual friendship.

Like the story, most childhood friendships have similar elements. Childhood is the first phase of life. Everything we do, or do with is the memory for our entire life until we die. The same is with childhood friendships, they are always very pure, innocent and unforgettable. The youngsters always have a close bond.

c. After reading the story, what inferences can you make about the contemporary Chinese economic and social system?

We learn from "My Old Home" that impoverished smallholders and agricultural labourers had complicated connections.

At that time, people from different socioeconomic backgrounds couldn't connect or create friendship bonds. Runtu is poor while Lu Xun is from a middle class family. Societal rules forbid the two from becoming friends. Slavery and social divides in China are also described from the context of full-time, part-time and year-round servants.

Exploitation of peasants and their discontent with feudalism is expressed in the story.

d. What does the story indicate about the geographical features of the narrator’s hometown?

The story indicates many geographical features of the narrator's hometown. The narrator and his friend Runtu had a great time in their hometown. Back then, there was a lot of beautiful greenery. Watermelons grew on the seashore, making the sand greener. The town used to be peaceful and pleasant.

After twenty years, the narrator returns home and finds no improvement. He finds a gloomy and deserted environment and sees a seaside town abandoned. He feels saddened by the place's solitude.

a. Human beings are on the road from time immemorial, always migrating to new places. Write an essay on The Trend of Migration in Nepal in about 300 words.

The Trend of Migration in Nepal

The term "migration" refers to cross-border mobility or inter-border mobility of the people for various reasons. People migrate for their own gain and to suit their viewpoints. Nepalese have the trend of both native and international migration.

In Nepal, the majority of people move from rural areas to metropolitan areas. Cities are preferred over peaceful and healthy rural places by most people. The majority of Nepalis choose to live in the cities, while the rural areas are often ignored. Youth from the village depart for better opportunities and the education of their children. There is a scarcity of skilled and youthful workers in most communities nowadays. Almost all of the homes in the community are occupied by older people. Migration has resulted in the depopulation of many towns and cities. Many relationships have been ruined because of this inclination.

In addition to domestic migration, people are emigrating to other countries. The majority of Nepalese citizens and their families have left the country. Individuals have been disconnected from their family, country, and humanity due to this trend. The shortage of opportunities in Nepal forces many to leave the country and go abroad to earn a better livelihood. This problem has resulted in a nationwide labor shortage. The government should provide a wide range of employment and income opportunities for its citizens.

In short, Nepal's migrant population is fast growing. There has to be a reaction from the Nepalese government to properly manage this migration trend.

b. Find one of your relatives or friends, who has migrated to a new place leaving his/her old home. Talk to him/her and prepare a report on what he/she felt while leaving the old home.

My childhood friend Shyam, along with his dad and mom, just moved to the US. Before moving to the United States, they sold their ancestral home and everything inside of it. They also gave away some of their goods to family and friends. It was like a dream come true for them.

They rented a house for a few months there. One day, I called him in messenger because I wanted to know how he was doing with life in the city. After I called him, he felt nostalgic. He said he hated that city. A year later, he's still homesick. He never forgot his roots. He regretted abandoning his homeland. It was a bad decision. His family still misses home.