The Treasure in the Forest (HG Wells) Summary Class 12 English 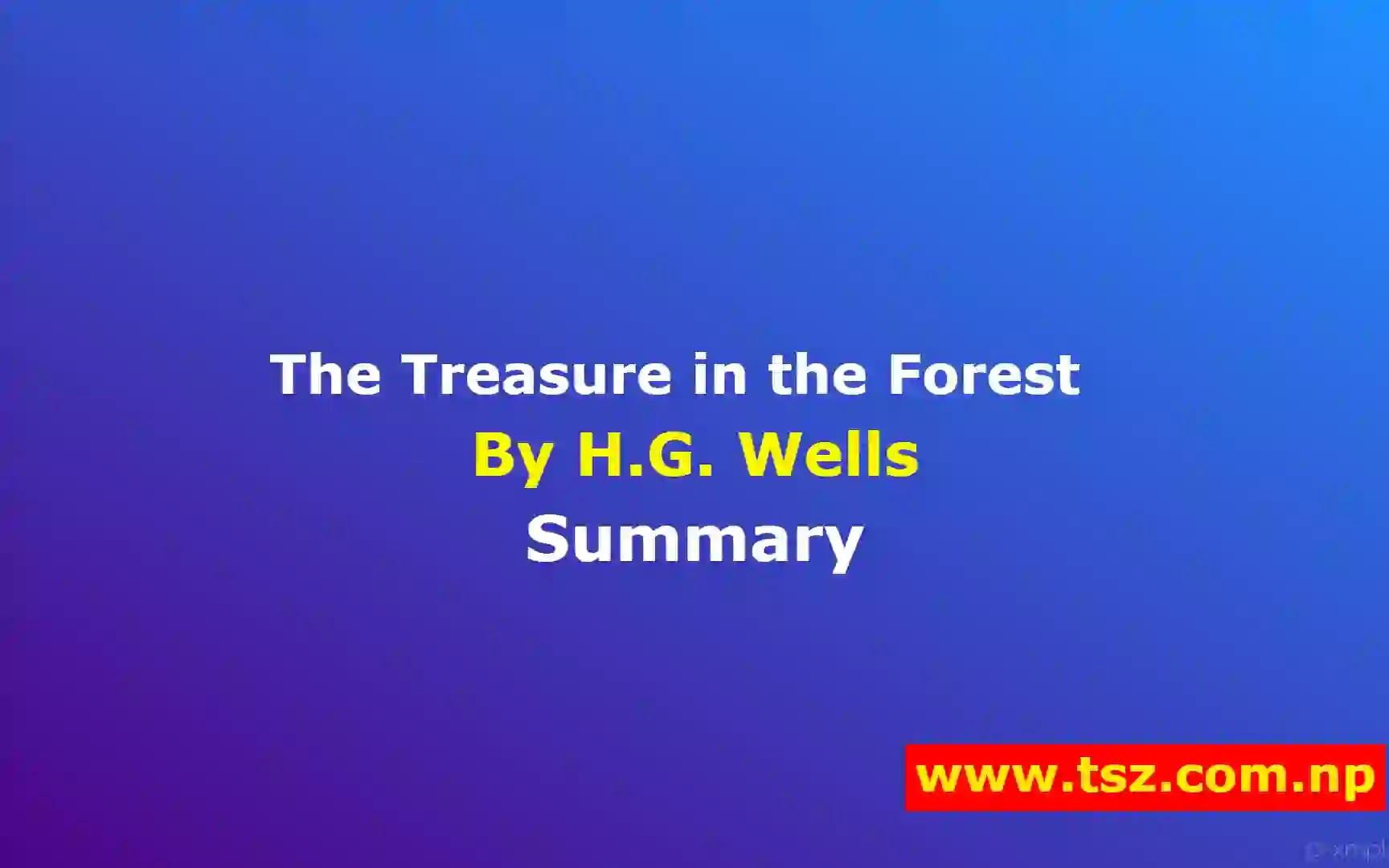 "The Treasure in the Forest by HG Wells" is a story written by HG Wells. Today, I will make you this story understand in simple languages.

This article will only explain about the overall summary of this story. If you want the exercise solution, go to:

The Treasure in the Forest by HG Wells Exercise

Evans and Hooker stole Chang-hi's treasure map. They follow the arrows on the map and go in that way. In the end, they locate the treasure buried area that they were looking for on the map. They start collecting the treasures and gold. The thorn puncture poisons both Hooker and Evans, and they both begin to suffer. They realize that , Chang-hi had put thorns to with the gold ingots to protect his treasure, which pricked them as they picked them up.

‘The Treasure in the Forest’ is an ominous adventure story in which two men search for Spanish treasure, letting greed get the better of their awareness. The story moves ahead to show how power and greed corrupt human beings.
Evans and Hooker are two greedy person. Chang-hi discovered a Spanish ship's treasure and buried it in a dense forest. Evans and Hooker and stole his map of treasure. Hooker reviewed the map. One aspect of the map catches their attention: a section of the map was covered with tiny dashes going in every direction. They couldn't figure out what was causing the dashes. Even though the map was not very accurate, the shape of the island could be clearly seen.
Hooker put the map away and started paddling although he was so tired. Then, he sat down and started taking a short nap. Evans closed his eyes and dreamt of treasure and Chang Hi.
He spotted them both in the woods at night. They saw a fire in the trees. They both spotted three Chinese-men discussing quietly about the treasure in front of a fire. Their accent was Chinese English. Hooker first heard them. They came closer to hear them more clear. Chang hi was telling his friends about the island's buried treasure. Chang Hi had hid the gold during a Spanish shipwreck. Chang hi wanted his friends to assist him find the buried treasure. He had a treasure map. The narrative of Chang hi was golden opportunity for Evans and Hooker. Then, Evans' dream shifted suddenly. He visualized that he snatched his map and made him silent. Evans later saw a lot of gold. Then, he dreamt that Chang hi opened his eyes and smiled a scary and mysterious expression. Chang hi said "Evans".
Hooker made Evans awake saying "Evans, Evan's, you fool... Hooker was screaming when Evans opened his eyes. He was surprised to find himself near the shore.
In the jungle, he was told by Hooker that there were three palm trees. He told him that if they found the palm trees, they could easily find the treasure.
Evans and Hooker find the spot indicated on the map and go by boat through the jungle for some time. They quickly come upon the identifying mound of stones that fits the description on the map.
They find a dead man's body there. They thought that he had also dug a hole for the treasure there as well. When they discovered several gold nuggets in the partly dug hole, they started collecting the gold pieces to return them to the boat, but he is immediately injured by a thorn. After a short distance, Evans' arms begin to ache, he sweats, and he begins to feel pain.
Evan suggests Hooker to run away. Hooker doesn't obey Evan and he start to load as much gold as they can inside Evans' jacket before. Then, Hooker arms also get ached, he got hurt, and he began to suffer the pain. He then begins shaking on the ground. Now, he also gets poisoned by the thorns while collecting the gold.
Both of them are pricked by a thorn, now he understands the meaning of the tiny dashes on the map; Chang-hi had surrounded his wealth with thorns. As a result of the Chinaman's protecting thorns, Hooker and Evans are both badly hurt. They're exhaling their last gasps of air.
He glanced at Evans, who remained still. His eyes were open but not moving.
Hooker began sucking his finger vainly. He began having hand, arm, and neck pain. He couldn't move his fingers. He dreamed Chang hi's happy expression. He glanced down, then up at Evans. A breeze blew through the trees. A big white flower fell from one of them and landed in front of him.
When the story concludes, we see Evans and Hooker laying in suffering next to each other, awaiting their deaths.

What are the themes of this story?

Moral of the story:

The main moral / message of "The Treasure in the forest" is that the path of greed and crime is always destructive. Another most important lesson is caution. We must prepare ahead of time before going there to achieve the expected outcome. So, before making a choice, we must concentrate on and understand. The outcome of greed would be awful. In addition, it reveals the vulnerability of money and wealth.

canoe (n.): a small, light, narrow boat, pointed at both ends and moved using a paddle

imperceptible (adj.): unable to be noticed or felt because of being very slight

obliterated (adj.): removed all signs of something, either by destroying it or by covering it so that it cannot be seen

unprovisioned (adj.): without supplies of food and other necessary things

ingot (n.): a piece of metal, usually in the shape of a narrow brick

galleon (n.): a large sailing ship with three or four masts, used both in trade and war from the 15th to the 18th centuries

exhume (v.): to dig out from the ground after it has been buried

wastrels (n.): a person who does nothing positive with his life; good for nothing

gibber (v.): to speak quickly in a way that cannot be understood

lagoon (n.): an area of sea water separated from the sea by a reef

tangle (n.): an untidy mass of things that are not in a state of order

implement (n.): a tool that works by being moved by hand

transverse (adj.): in a position or direction that is at an angle of 90° to something else

prospect (v.): to search for gold, oil, or other valuable substances on or under the surface of the earth

incrustation (n): a layer of material, such as dirt or a chemical, that forms on something, especially slowly

rosette (n.): an object or arrangement resembling a rose

swerve (v.): change or cause to change direction abruptly

prostrate (adj.): lying with the face down and arms stretched out, especially as a sign of respect or worship

moon (v.): to move or spend time in a way that shows a lack of care and interest and no clear purpose

His first novel, The Time Machine (1895) was immediately successful, and so he added a series of science fiction novels that revealed him as a writer of marked originality and an immense richness of ideas.

This story is taken from the collection 'The Country of the Blind' and other Short Stories.