The Treasure in the Forest Exercise Class 12 English: Questions Answers 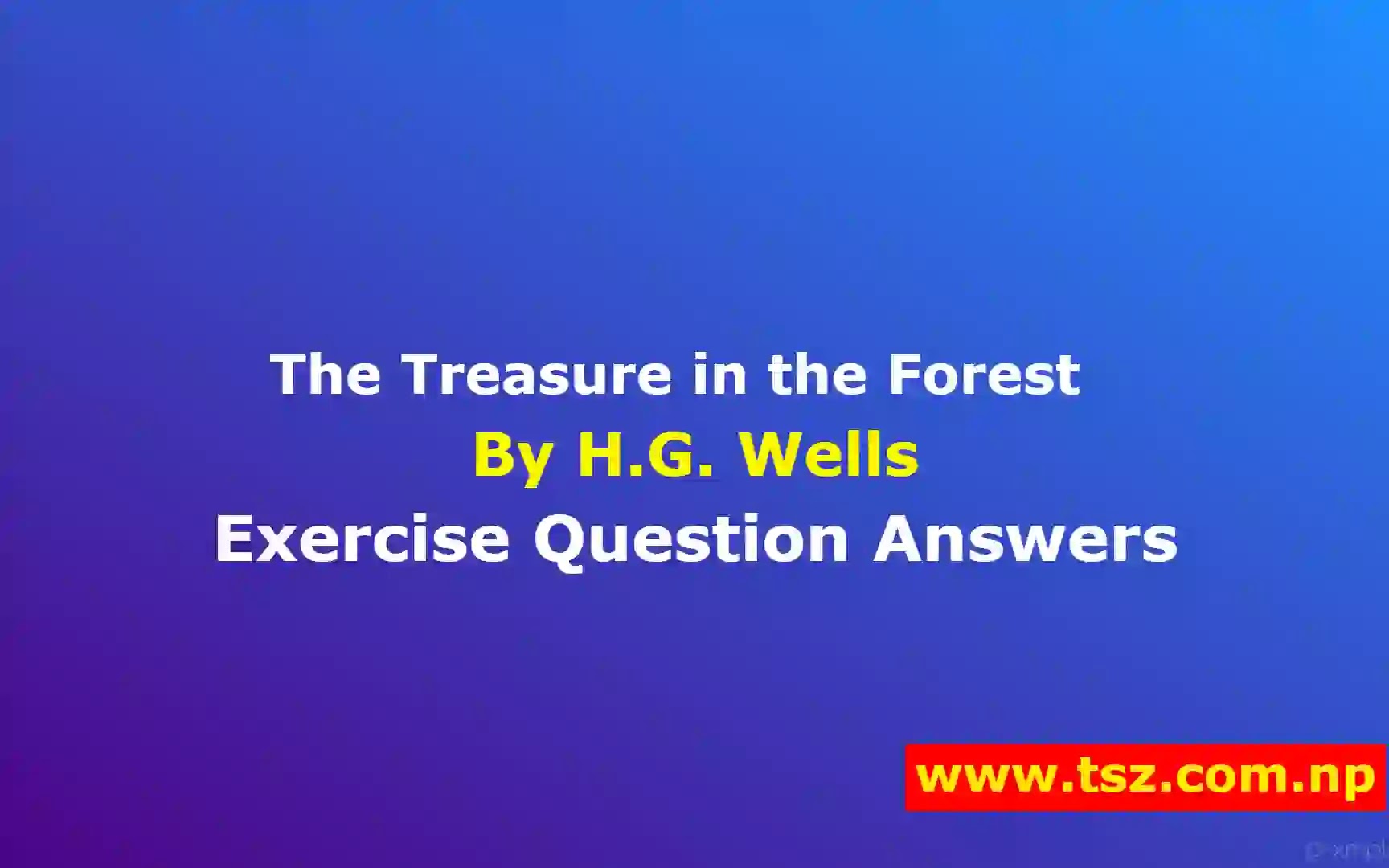 a. Describe the expository scene of the story.

= In the expository scene of the story, we see two characters, Evans and Hooker, sailing in the boat, holding a map in hand, and were seen perplexed as they did not understand the map. They were approaching a land nearby, which was a dense forest.

b. What does the map look like and how do Evan and Hooker interpret it?

= The map was a little bit torn, and since it was older, the paper was also unclear. Somehow, they succeed in decoding the symbols in the map. They make their destination to the dotted lines area, which according to them, is the place where the treasure was hidden.

c. How did Evan and Hooker know about the treasure?

= Evan and Hooker had known about the treasure that was buried and protected by Chang-hi in a secret place while the Chinese man was having the chit chat with his three friends in the jungle. The Chinese men were talking about the treasure in an English accent in front of a roaring fire. Evans and Hooker sneaked up behind them and eavesdropped on their plot to locate the hidden treasure.

Evan daydreamed while on his boat and it was a pretty strange dream. After closing his eyes, he was shocked to discover many pictures in his dream. He got the vision of himself and Hooker when they were searching for something in the forest. An English accent conversation between three Chinese men about the forests' riches drew their attention. Their pals moved closer to them to better hear them. A Chinese man was talking to them about Spanish treasures.

There was a battle between them in which Chang-hi was killed. After some silence, Chang-hi suddenly burst out laughing. Evan saw a big devil-like Chang-hi with a massive black tail in the center of a pile of gold, calling his name.

e. What do the two treasure hunters see when they walk towards the island?

The two treasure hunters, Evans and Hooker saw three palm palms, a large number of plants and inside it, a semi decayed dead body of a Chinese guy lying face down on the grass.

f. In what condition did the treasure hunters find the dead man?

=The treasure hunters found the dead man in a swollen and partially spoiled state. They slowly approached the corpse, cutting big white blossoms and thick bushes. When Evans inspected the deceased's body, he found that he was a Chinese man. Only a few gold ingots were scattered around his deceased's body.

g. How did the treasure hunters try to carry gold ingots to the canoe?

= They wanted to carry as much as gold as they could to the boat. So, they filled their jackets with gold ingots and started delivering it to the boat. Doing so, Evans feels the thorn poisonous prick and soon starts dying in the pain. Hooker was still hungry for the gold and treasure, so he assembled the scattered gold ingots and started carrying them to the canoe. However, both get brutally hurt at the end of the story.

h. How were Evan and Hooker poisoned?

= Chang-Hi had protected the treasure with poisonous thorns as indicated in the map with Dashes(---). While carrying the ingots to canoe, Evans feels the arm ache and falls to the ground. But he stills suggests Hooker take them to canoe. But, When Hooker starts carrying them again, he also feels a thorn prick and gets poisoned. Hooker's thumb was pierced by a thin thorn, and eventually, both got poisoned.

a. How do you know the story is set on a tropical island?

I can say with certainty that the story is set on a tropical island because of the vegetation found there and the fact that the people in this story seem weary and thirsty as a result of their long nighttime journey and the intense heat on the island. Island is also abandoned by humans, and is desolate because the temperature on the tropical island is very hot. A tropical island will have dense shrubs and large white blooms like those the characters encounter on their journey. So, the narrative is set on a tropical island, with palm palms, thorny plants, seagrass, and other marine life.

b. Why do you think Evan and Hooker took such a risk of finding the buried treasure on a desert island?

Evans and Hooker, in my view, took such a risk by seeking for undiscovered treasure on a remote island because they wanted to become wealthy.

As soon as Greed wins, a person is able to handle any challenge. They kill a Chinese guy while attempting to take his map. They're on the lookout for a fantastic opportunity in order to raise their standard of living. Financial constraints may have motivated them to take the risk.

c. Do you think the narrator of the story is racist? If yes, what made him feel superior to other races?

Yes, I think the narrator is racist. We can infer the treatment of his characters has been slanted because of his racism. The way he addresses his audience is asymmetrical. Characters are referred to using racial or ethnic slurs.

Two English Men are shown as being superior and dominating to the Chinese men in the story. He had provided the proper names and emphasized the english characters but, the chinese characters seem to have a very minor onstage role in this story. So, racial differences are evident in his depictions of the people.

d. What do you think is the moral of the story?

The moral of the story, “The treasure in the forest by HG Wells” is that we should avoid pursuing greed and power at all costs, or it will end up very bad. It also teaches to have a foresight and long term visionary plans before starting anything. One's desire for power and wealth has terrible consequences. In the story, two Englishmen were killed because of their thirst for money and disregard for the moral and legislative laws. It's advisable to stay away from both greed and power since they're both destructive.

a. Interpret the story as a mystery story.

A mystery story piques readers' attention. All of the elements of a good mystery may be found in HG Wells' story of a treasure in the forest. A mystery has suspense, a vital witness, fascinating settings, misdirections, and other puzzle pieces to resolve. This story also carries upon this subject.

The story's characters are well-developed, and their circumstances are unpredictable. This narrative kept the audience guessing from start to finish.

Evans and Hooker sail in the boat with a certain objective after getting the map of treasure from Chang-hi’s assasination. The story advances by following the map's and characters' suggestions. The story describes the characters and the environment well. It's hard to keep track of what's going on.

Alternatively, the storyline is a mystery. The mystery behind treasure and mystery behind the dashes of the map all contribute to making it a mystery story. The poisonous thorns killed them in the end. The story's creepy forest setting and tragic deaths keep readers on edge.

b. Treasure hunting is a favorite subject of children’s stories. Remember a treasure hunting story you read in your childhood and compare and contrast it with ‘The Treasure in the Forest.

'The Hidden Treasure' is a story that I heard when I was a kid.

In the story, There was an old father who had three sons who were all idlers and never helped the father. The father was very sad and worried. He tried his level best to mend the habits but did not succeed.

Once he became very sick, he called his sons, all of whom reached his room. He asked them to sit down and listen carefully. " My dear sons, I'm weak and ill. There is a lot of money hidden in our fields but I have forgotten where I had buried it. Dig that fresher out after my death.", he said. The farmer died after two days. The sons dug every inch of the land but could not find anything. They were advised to sow wheat in the field. They had a very good crop. The moral of the story is that hard work gives very good results.

Like in the story, "The Treasure in the forest", this story also depicts the greed of humans for wealth. They would rather let his father die, but won't let go of the treasure, which is almost similar to Chang hi's death in our story.

Also Read:The Treasure in the Forest by HG Wells Summary