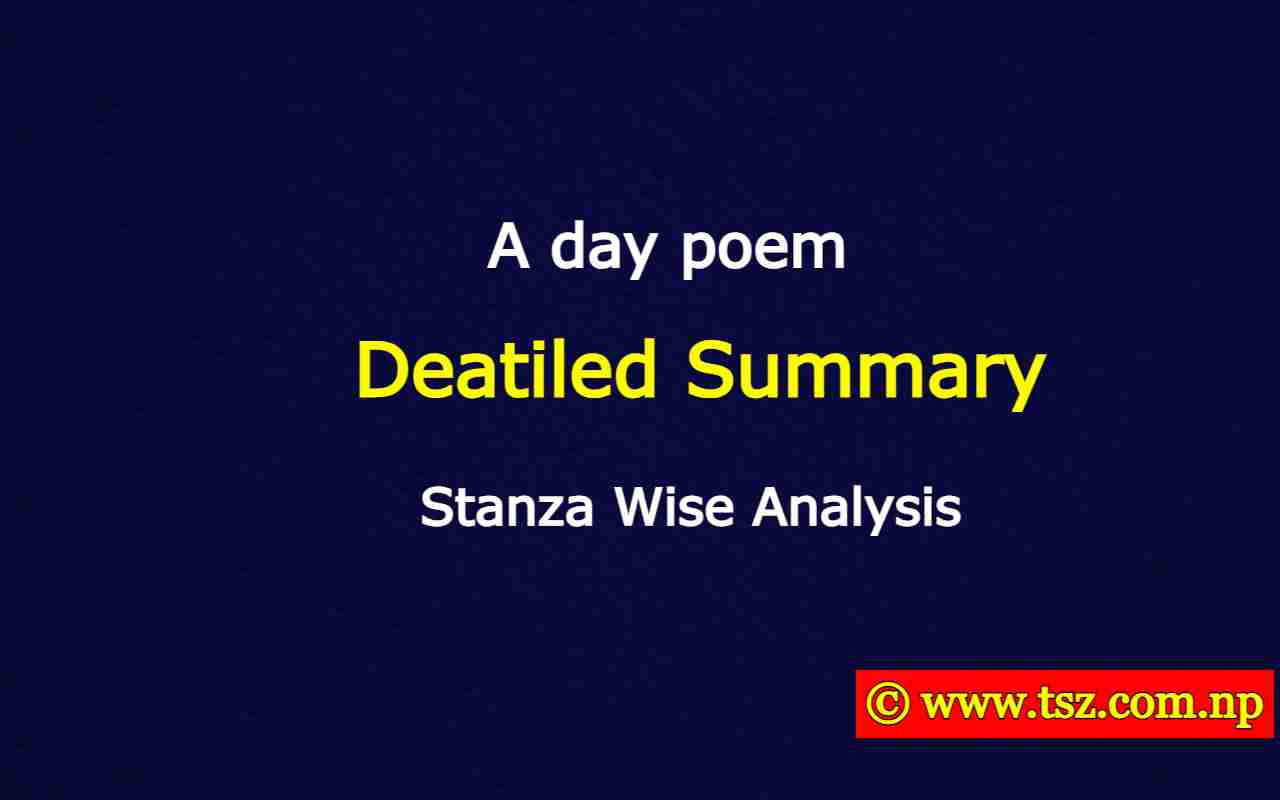 Major Symbols Used in the poem

Brief Summary of the poem

In the "A Day" poem, Dickinson, through the use of brilliant imagery and symbols, describes a beautiful day that leads children from innocence to experience. This describes the rising of the sun, what happens after it rises, and what happens after the sun sets. A thin ribbon of light descends from above the steeple, altering its hue from blue to purple. Upon hearing of the sun rising, the news spreads or the light rays travel like the squirrels running to get away.

Sunlight reveals the black hills and a bobolink, a tiny American bird, sings in the lovely morning. When the sun shines, it makes everything and everyone happy and comfortable. In order to ensure that the sun will rise with lovely and wonderful rays, the speaker speaks to himself. Sunrise is confirmed by magnificent scenery, pristine hills, and the singing of the bobolink.

The speaker lacks confidence in his description of the sunset. When the sun goes down, the sky begins to purr, and it continues to purr until the sky is totally black. There is a golden tint to the boys and girls as they return to their refuge. The grey-suited caretaker/father waits for the children to return. He opens the gate and allows the youngsters in, allowing additional flocks to enter their home.

What is the main theme of A Day poem?

A day poem deals with the theme of birth and death. Here, the rising sun symbolises birth and the sunset symbolises death. As soon as a child is born, he/she grows up very fast and gradually starts to understand various responsibilities, just like we get busy during the day. So, one can say that the most important theme of the poem is the journey of life from birth to death. Death and immortality are the main themes that are thoroughly discussed in this poem.

Literary devices used in the poem

Literary devices like Alliteration/Symbol/Metaphor/Simile/Personification are also used in this poem. Let's discuss about them thoroughly.

Symbolism: The poem as a whole represents the passage from life to death. The poet infers human behaviours connected with life and death with each verse.
Metaphor: She employs a number of clear analogies to create sympathetic images. She refers to sunrays as "ribbons" in verse I, line 2. In verse 3, line 3, she refers to the same sunrays as "Yellow lads and girls." In verse 4, line 2, the "Dominie in grey" represents "God" or a religious person, while "flock" alludes to people. Finally, in stanza 4, line 3, "evening bars" is a metaphor for the conclusion of a day or the end of life.
Simile: In verse 1, line 4, the "news" of dawn spreads with the pace of a squirrel's run, which is an example of simile.
Personification: In "A Day," another poetic technique is personification. It occurs in verse I, line 3, where "Steeples," like humans, swim; and in stanza 2, line 2, where "hills," like ladies, remove their "bonnets."
Alliteration occurs in stanza I, line 3, with the repeat of the "s" sound; it also appears in stanza 2, line 2, with the predominant "b" sound.

Stanza by Stanza Explanation of the poem

According to the poet, she observes how the Sun rises in the first verse, as well as the changing conditions that follow from the Sun's rising. She compared the rays of the sun with one ribbon at a time. She likens the beams of the sun to the ribbon, and says, "the rays of the sun are like the ribbon." The poet wrote the ribbon. When one speaks to a rise, however, it applies in this instance. In this case, the metaphor is in use.
When she observed that the sunlight was scattered over the sky, she concluded that the rays looked like ribbons. The church's spire took on a deeper shade of violet as a result of the sunlight striking it. Tall structures that are often seen in churches are known as steeples. It had the colour of amethyst and seemed to be made of it. A purple coloured gemstone that is extremely valuable is known as amethyst. When the squirrels run, it doesn't take long for the news to spread that the sun has risen. With the sunrise, the hills were revealed as if they had removed their bonnets. A songbird from the United States known as the "bubbling."The duo started singing their morning hymn, as they got dressed. In the poet's view, the sun was behind all that had occurred. Although this good feeling was brought about by the sun, in the end, it was the sun that caused it.
Then, of course, there is the beauty of nature. This beautiful image represents the concept that everything moves at breakneck speed when the sun rises. Because we have to rush from the moment we get up, this symbolises how fast-paced our life is. The wonder of the rising sun is brought to life by the sun. And this serves as a representation of the starting point of anything.
We don't know how she created the scenario in the third stanza. At this time, there were many little yellow boys and girls ascending toward the other side or dominating in grey. Her use of the phrase "how the sun sets" in these lines clarifies her no-idea about how the sun sets. At dusk, the skies become a lighter shade of red, as do the faces of the children who are playing outside. When this happens, a Dominion moves in to gather up the children and take them back to their houses.
At sunset, the clouds in the western sky have a broad spectrum of orange, yellow, and purple hues, and they seem to be in motion. The poet recalls how children often go up and down stairs while they play. These kids are then taken away by a Domini at night's end. The word "domini," which means "teachers," is derived from "dominus," which means "lord" in Latin. It is the darkness of the night that signifies the end of the day in a figurative sense.
While some may take the colour grey as meaning that a lovely day has ended, or that the poet does not know when the sun will set, I choose to see it as a symbol of the end of a day, reminding me that the poet does not know when the sun will set. Because nobody knows what happens after death, this is called the Great Unknown. Sunrise is the beginning of life and sunset is the end of life, yet they happen at the same time. This is the most significant part of the poem, and I'm sure you've learned something new.

Conclusion of the Poem

The poem starts with the speaker explaining how the sun rises and what happens thereafter in a nice manner. The first and second lines of the poem depict the speaker's delight at witnessing steeples change colour after sunrise, birds, hills, and the rising sun itself. She explains the items in such a way that they reflect the innocence of a kid in terms of how he or she views the universe.
The speaker discusses the sun setting in the poem's third and fourth stanzas. She said that she had no idea how it worked. She is unable to provide an explanation due to a lack of information. This represents the immobility that comes with death. It also demonstrates how little people really know about dying. Despite this, the speaker claims that the sky becomes purple when the sun goes down, and it's totally black when the light comes up. The youngsters, according to the speaker, climbed up the stile/ladder to cross it, and when they got to the other side, their instructor put up the nighttime bar and led them away.
Dickinson discusses a wonderful day that brings children from innocence to experience in her poem "A Day" through the use of bright imagery and metaphors. Emily Dickinson's 'A Day' is a well-known nineteenth-century metaphysical poem, renowned for its double meanings and cerebral allusions. 'A Day' is a literal term that refers to sunrise and sunset. It also describes, in a figurative sense, the passage from life to death. Additionally, the poem has a kid narrator whose innocent and certain tone evokes the splendour of daybreak.

Specialties of "A Day" Poem by Emily Dickinson

A Day Poem by Emily Dickinson is written in lines of two words or less. She also utilised odd capitalization and punctuation, as well as what we would call slant rhymes. She also used hyphens (--) to let the reader have some pause or break so that they could ponder the context a bit. All these tricks of hers have made this poem very interesting for the readers.

steeples (n.): tall towers with a spire on top, rising above the roof of a church

bonnets (n.): hats tied with strings under the chin, worn by babies and women

a schoolmaster (in Scotland); a pastor or clergyman (in the United States)

Stile(n.): a set of steps that help people to climb over a fence or wall, especially in the village.

About: Author of the Day Poem: Emily Dickinson

One of the most eminent American poets from the nineteenth century, Emily Dickinson’s (1830-1886) poetry was heavily influenced by the Metaphysical poets of seventeenth-century England, as well as her reading of the Book of Revelation and her upbringing in a Puritan New England town.

About two-thirds of her life was spent alone. So she's spent a lot of time alone. Her social circle was limited. She seldom left her room. Dickinson grew up wearing just white. Her age was the main culprit. Her family members never mistreated her and she was never abused. She chose a life different from ours, and she was pleased with it. Only 10 of her 1800 poems and one letter were ever published.

While Dickinson was extremely prolific as a poet, her regularly enclosed poems in letters to friends were not publicly recognised during her lifetime.

However, she has been steadily gaining popularity through her posthumously published poems.