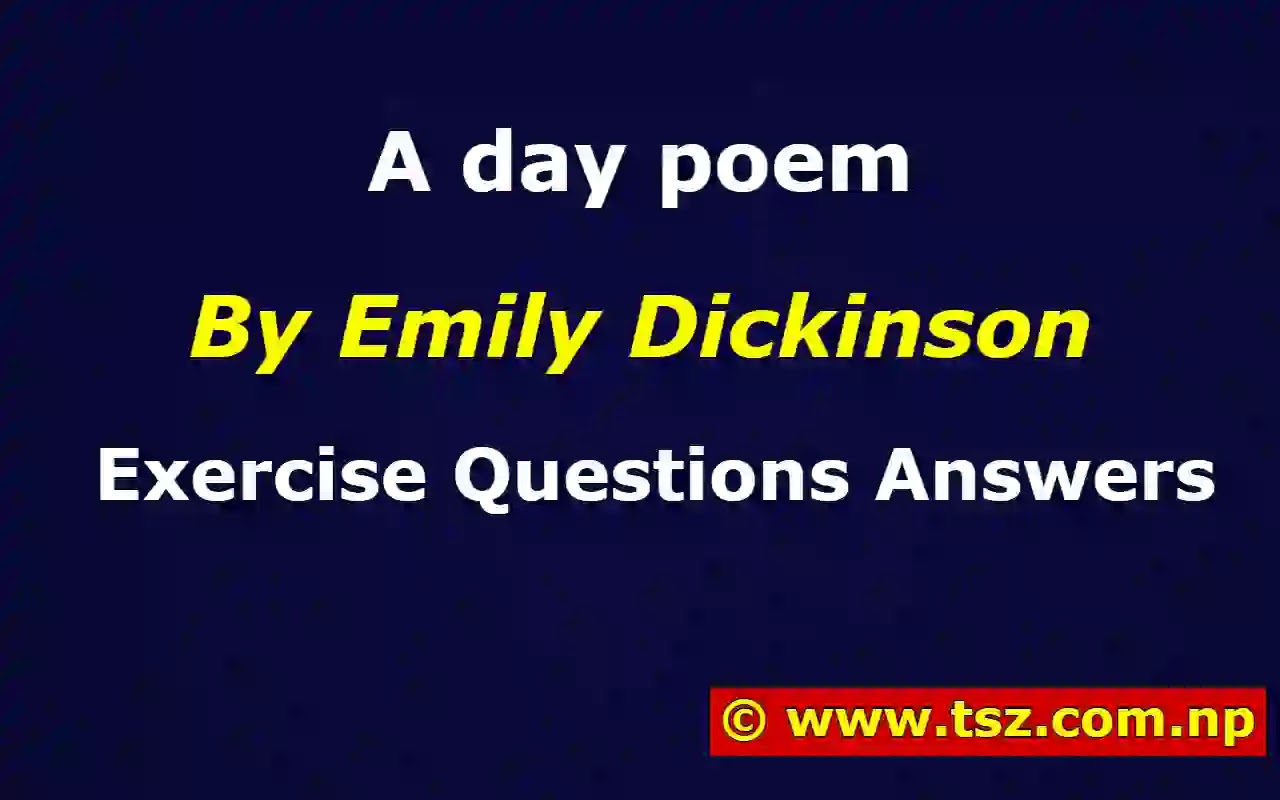 a. How does the poet describe the morning sun in the first stanza?

= The poet describes the morning sun as a sign of happiness in the first stanza. The sun's beams resembled a series of loosely knotted ribbons. In a flash, everything became crystal clear. The steeple of the church took on an amethyst hue as a result. Then, the news of the sun's arrival travels as quickly as a squirrel's quick movements.

b. What does the line ‘The news like squirrels ran’ mean?

c. What do you understand by the line ‘The hills untied their bonnets’?

= The hills are in the cap (bonnet) of darkness before the sun rises. Bonnets mean a special type of hat which can be tied under the chin. Before sunrise, the hills seemed darker and gloomier as they were not happy. But as soon as the sun emerges and the sun rays fall on hills, they become so happy and excited. They unveil their greenery and beauty by removing their bonnets. All hills appear lovely in excellent green colour after sunrise. The hills are characterized as they loosen their caps like ladies. Hence, the hills seem to be removing their hats in a frenzied manner, after the sunrise is what the above phrase means.

d. Is the speaker watching the morning sun? Why? Why not?

= No, the speaker is not watching the morning sun because he is not doing the real-time narration of the morning sun. 'I’ll tell you how the Sun rose’ means that the speaker has witnessed the sun rise and the changes following the sun rise, and at the present moment he is describing what he saw to his friends who woke up later in the morning.

e. How does the sun set?

The speaker is really unknown to the sunset. All he knows is that the sun goes away taking all the happiness, joy and leaves the unhappy and gloomy dark when it sets, he doesn't know where. The slowly turning purple and yellow hues signal the sun's setting, but since he is unclear, he doesn't know how exactly the sun set.

a. What, according to the speaker, is a day?

= Emily Dickinson's 'A Day' is a lyrical poem that describes dawn and sunset, where day is symbolised as life. A day is life, where sun rise is the birth, and setting of the sun is compared with death.  It also depicts the beauty of life and the uncertainty of death in a philosophical sense. Sunrise and sunset are literally described in 'A Day.' It further describes the journey from life to death in a metaphorical way.

b. What purpose does the hyphen in the first line serve in the poem?

= Hyphen(--) is used in poetry to indicate a break. In this poem, Emily Dickenson innovatively utilizes this punctuation mark. She is using hyphens if she does not find the words for profound feelings, to give readers the power of silence in some circumstances, to imagine, to fill the missing word, or she is allowing the readers to take some time to ponder on the context by themselves.

c. What makes this poem lyrical and sonorous? Discuss.

= It is a lyrical poem in the sense that it communicates the author's own thoughts and feelings.. In lyrical poetry, the use of the first-person pronoun "I" denotes the poet's identity. In this poem, the author expresses her own personal experience of waking up to the first rays of sunlight. Sonorous is a style of writing that is rich in sound and crammed with rhymes or phrases. The musical and melodic quality of a poem is influenced by a wide range of circumstances. Sound methods including alliteration, assonance, rhyme, and rhythm are used in this poem to improve its musicality.

d. Who is the target audience of the speaker? Why?

= In this poem, Children and Adults both are the target audience of the speaker. The readers are shown the world as viewed by an innocent kid. Speaker is telling his friends, "I will tell you how the sun rose". So, We may argue that the intended audience consists of kids who have lost the opportunity to see the sun rising when they wake up late in the morning.

When we look at the poem from a philosophical point of view, the whole human race is also the intended audience. Sunrise is the beginning of life, daytime activities are a trip through life, and sundown is the end of life. However, the final result is a little mysterious.

e. The poem seems to describe a day for children. How would the adult people respond to this poem? Discuss this poem with your parents/guardians and write the answer based on their responses.

= The poem seems to describe a day for children. But, this poem is also suitable for adult people. This poem is a literal description of the dawn, as well as the events that occur between sunrise and sundown. For children, the direct meaning of the poem is applicable but for adults, the metaphysical meaning of this poem makes more sense. To be more precise, the poem speaks about the passage from life to death in a metaphysical sense. There is enthusiasm at the beginning of life, a squirrel racing like a life and a strange conclusion to a life in this poem.

a. Observe your surroundings one fine morning and write a poem based on your own experience.

= You can write a Poem on your own. I am not good at writing poems. Here is just a small verse anyways.

As the night draws to a close,

Red-orange light begins to emancipate itself...

Purple and blue with a reddish orange hue.

It's as though the earth has been struck by gold ribbons.

This is a beautiful scene with a ray of hope in...

We begin each new day with an amazing sight.

Heart is enjoying for a day start like this,

The trip begins with a fresh desire and wish,

b. Write a personal essay on A Day in the School.

= Our lives are filled with numerous experiences, yet we don't recall them all. No day could be more important and precious to me than the first day in school. I started school when I was six years old. I believe it was April. I was a little child back then.

My recollection of my first day of school is still vivid. My school is called "Child Academy". My instructor escorted me to my classroom after my mother dropped me there. Even though I was nervous entering the classroom, the instructor was very courteous to me. My spot on the front bench was secured in an instant thanks to her. They ran up and shook my hand immediately away, at least three of them. My fears had been allayed. I grabbed a copy of a math textbook and started doing the sums after a few minutes of digging around. After the lesson, a few more students came up to me and introduced themselves. It was a joy to make friends at school. The school day came to an end at 1 p.m. My father picked me up and drove me back to my house.

My life will never be the same again after that day.