Summary of On Libraries by Oliver Sacks Class 12 English 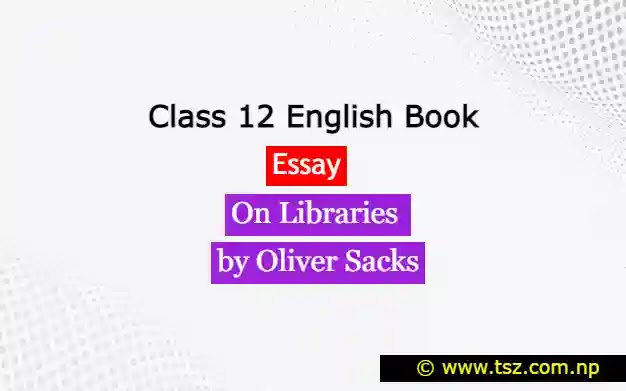 On Libraries written by Oliver Sacks Summary in class 12 English

“On Libraries” is written in praise of intellectual freedom, community work, and the ecstasy of serendipitous discovery. Among the titans of mind and spirit shaped and saved by libraries, Oliver Sacks was the great neurologist, author, and voracious reader.
This essay is a personal essay about Oliver Sacks, who was a bookworm and fond of reading books in libraries. While growing up, Oliver Sacks lived in an oak paneled library left to him by his father, a Hebrew scholar and admirer of Norwegian playwright Henrik Ibsen (1828-1906). Books by Henrik Ibsen, poetry by his father's generation, and adventure and history books owned by his siblings filled the shelves of their family's library. He'd read Rudyard Kipling's The Jungle Book, an English short story writer. He was captivated by the story of Mowgli, a fictitious character in the book.
In the library, There was a separate cabinet reserved by his parents, where medical related books were kept. His mother also possessed a large collection of literature, including works by American poet Emily Dickinson, English novelist Anthony Trollope, Irish playwright George Bernard Shaw, British author Rudyard Kipling, and poets William Shakespeare and John Milton, as well as poetry volumes she'd won in school contests. His mother, like him, loved literature. Since he was three or four years old, the library and books had been a fond memory for him. The library was stunning, but he also had a small lab where he could lose himself in literature and forget about food for hours at a time.
He received a proper education in Willesden Public library. St Paul's School's Walker Library lacked chemistry books, so he went to the Science Museum Library with his schoolmaster and picked out what he needed from their collection of chemical books. When he was an adult, he delved into fields like astronomy and chemistry. He was an excellent student in libraries and a voracious reader who enjoyed the company of other bookworms as much as he did his own work. One of his favorite places to spend time as an adult was the Willesden Public Library in Willesden Green, London. He disliked passive reading in formal schools since he was an active reader who was used to studying on his own.
When he was a student, he went to the Radcliffe Science Library and the Bodleian Library in Oxford. After reading Theodore Hook's work, he made the decision to write a biography on the author. A biography of him was published in the Bodleian Library after he had gathered documents from the British Museum Library. He studied old works like Gesner's Historiae Animalium (1551), Agassiz's writings, Charles Darwin, Sir Thomas Browne, and Jonathan Swift, as well as 17th and 18th century works by Samuel Johnson, David Hume, Alexander Pope, and John Dryden. The library at Queen's College, Oxford, was his favorite.
He was awarded a full scholarship at Albert Einstein College of Medicine, where he had no trouble reading or writing. He formed a strong bond with a fellow reader, with whom he enjoyed reading and conversing. The year was 1965, and he had just moved to New York City, where he had a little apartment. Although reading and writing were tough in the flat, he nevertheless managed to complete portions of his book Migraine.  He ran across another person looking for the same old book, Volumes of Brain from 1890.
Oliver went on to other libraries, where he sat at a table surrounded by piles of books. In the 1990s, he saw that pupils were using computers instead of bookshelves to gather knowledge. The college decided to get rid of all the books since most of the students weren't utilizing them. A similar occurrence occurred at the AECOM Library as well as in libraries located in other countries. The vast majority of the books had been discarded. To him, this amounted to a murder or other serious offense.
Th eradication or replacement of the books amounted to the eradication of centuries' worth of knowledge. His heart was broken when he saw how many precious volumes had been destroyed by fire. Digital books lack the ability to wow and thrill the reader in the same way physical books do. There are certain novels that can't be replaced after they've been read. In the 1960s, most libraries had separate areas only for ancient books. This things have been analysed in this essay. Hope you liked the summary.

fantasies (n.): imagination, not real
morocco (n.): a fine soft material used for making covers for books
curl up (v.): to form or make sth form into a curl or curls
absorbed (adv.): with one’s attention fully held
astronomy (n.): the scientific study of the Sun, moon, stars, planets, etc.
hungered for (v.): to have a strong desire for sb/sth
devoured (v.): to eat sth completely and quickly, especially because of hunger
stumbled upon (v.): to find sth/sb unexpectedly or by chance
improvisation (n.): music, a part in a play
incunabula (n.): an early printed book, especially one printed before 1501
magniloquence (n.): use of high-flown language
lapidary (adj.): elegant and precise
catacombs (n.): a series of underground tunnels
enclave (n.): a small territory belonging to one state or group of people surrounded by that of another
pokey (adj.): small and cramped
aloft (adv.): overhead
stacks (n.): piles or heaps of something
camaraderie (n.): friendship and trust
rummaging (v.): to turn things over and esp. make them untidy while searching for sth
helt (v.): to lift or carry
About On Libraries Author: Oliver Sacks

Oliver Sacks was born in 1933 in London and was educated at the Queen’s College, Oxford. He completed his medical training at San Francisco’s Mount Zion Hospital and at UCLA before moving to New York, where he soon encountered the patients whom he would write about in his book Awakenings. Sacks was a neurologist and an author whose case studies of patients with unusual disorders became best-sellers.

His focus on patients with particularly rare or dramatic problems made his work popular with writers in other forms, and his case studies were adapted into several different movies and operas. Dr. Sacks spent almost fifty years working as a neurologist and wrote a number of books--including The Man Who Mistook His Wife for a Hat, Musicophilia, and Hallucinations--about the strange neurological predicaments and conditions of his patients.

The New York Times referred to him as "the poet laureate of medicine," and he received many awards, including honors from ‘The Guggenheim Foundation,’ The National Science Foundation, The American Academy of Arts and Letters, and The Royal College of Physicians. His memoir, On the Move, was published shortly before his death in August 2015.