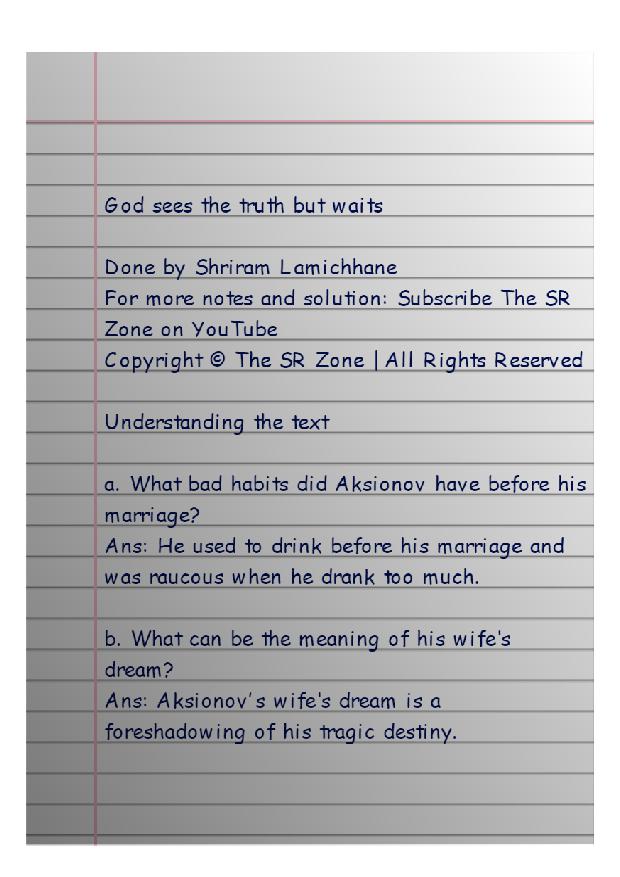 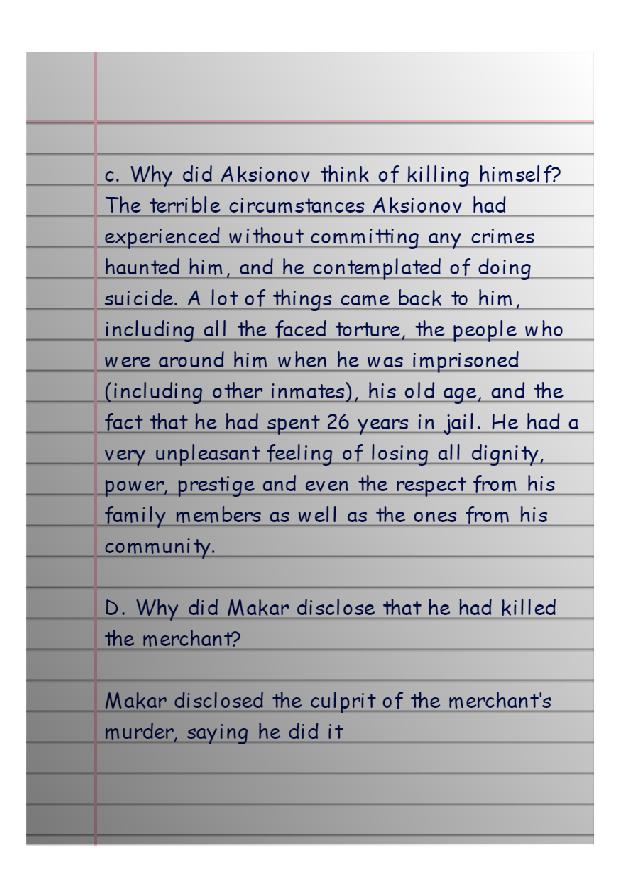 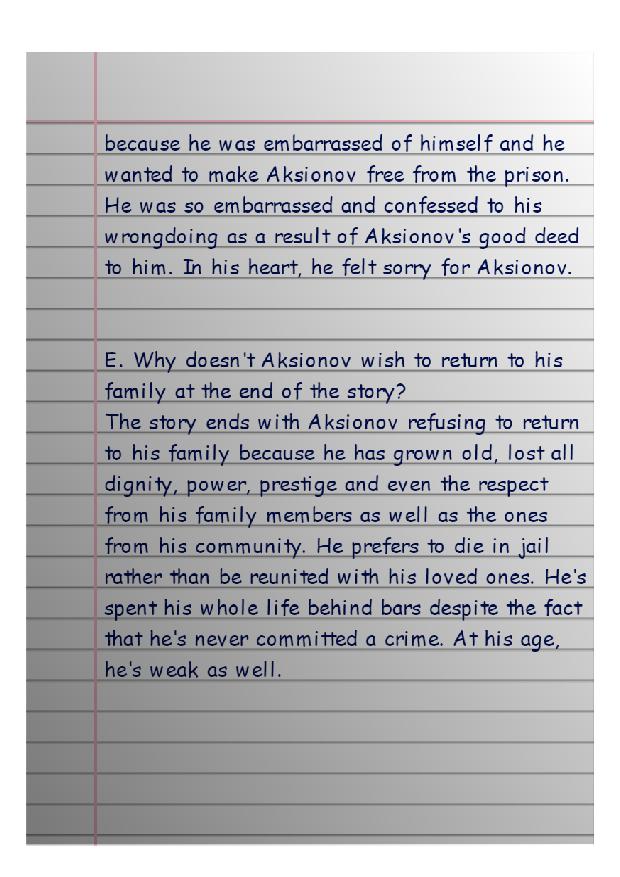 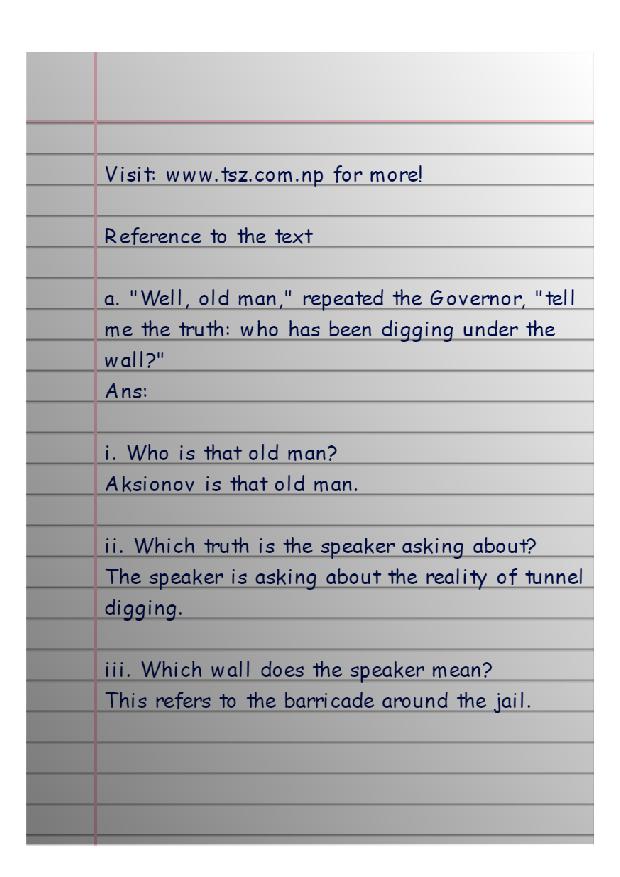 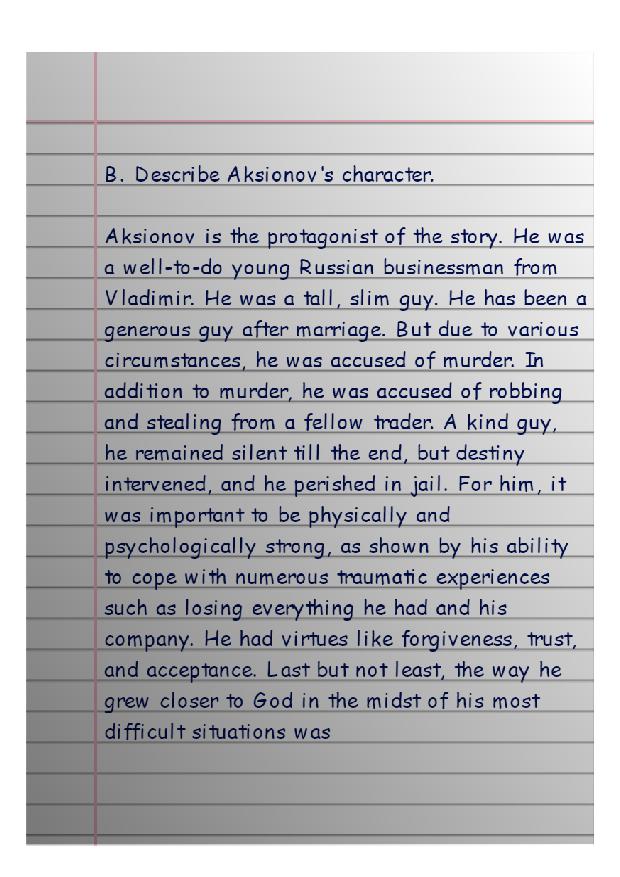 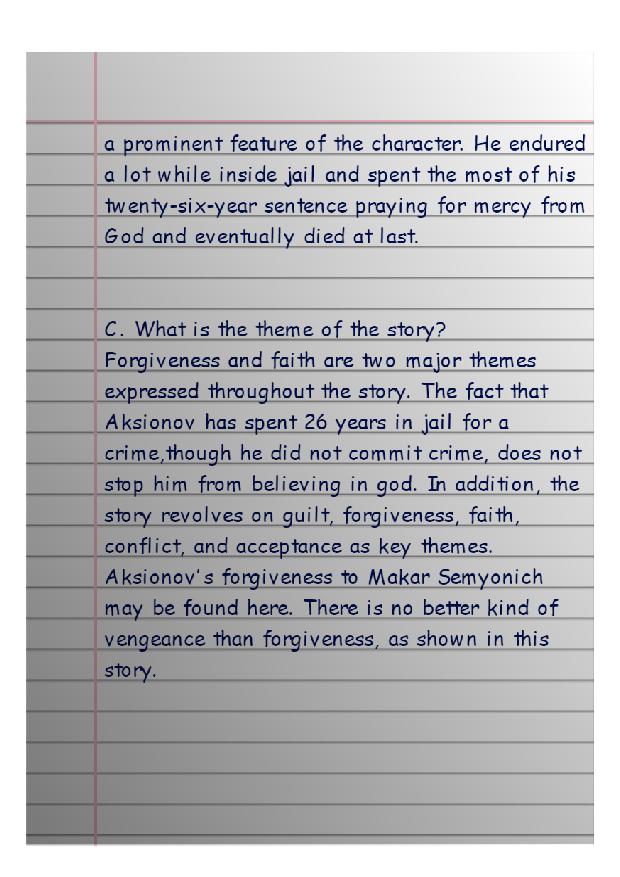 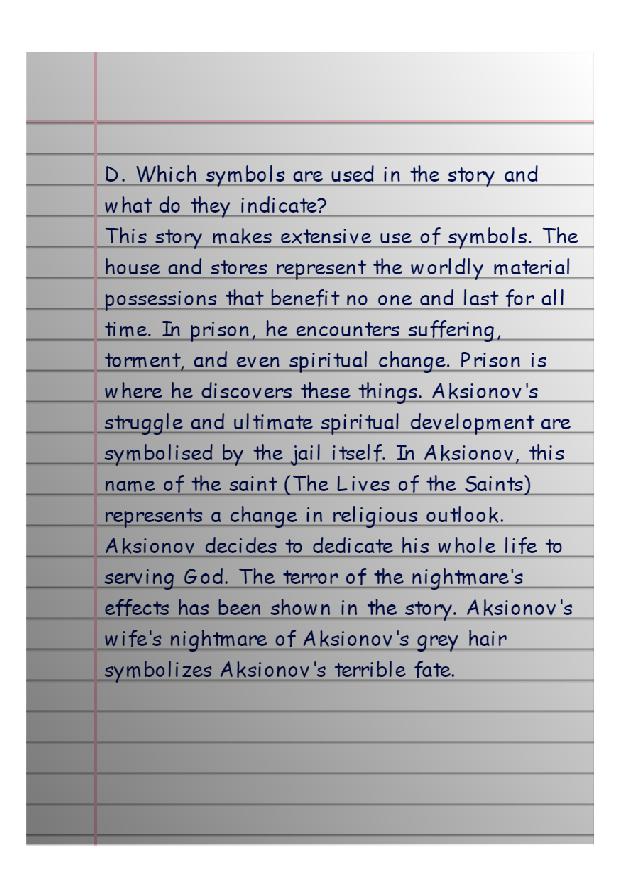 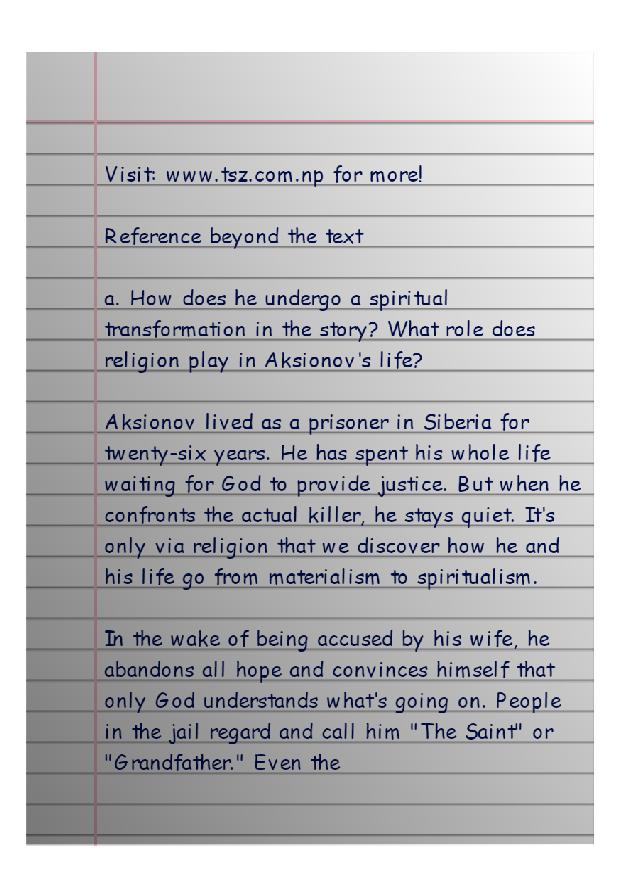 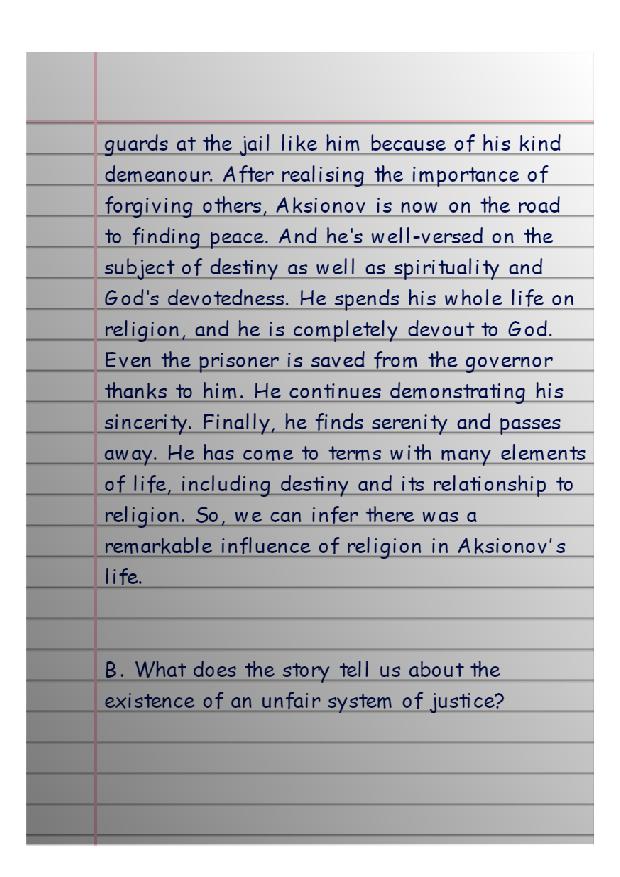 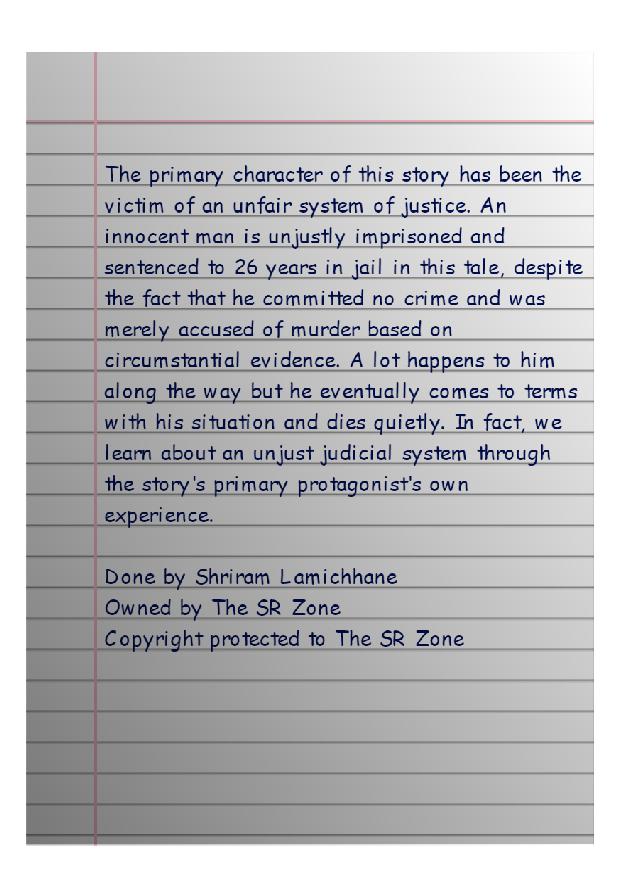 Go to The Wish Exercise: Questions Answers and Summary Class 11

Leo Tolstoy's short story "God Sees the Truth, But Waits" is a popular story written in 1872. The setting is Valdimir, Russia. Ivan Dmitrich Aksionov, the main character in Leo N. Tolstoy's story titled "God Sees the Truth, But Waits," endures sufferings as a consequence of the acts of a 3rd person, but he maintains his faith in God to help him get through these difficult times.

Ivan Demitrich Aksionov is a wealthy businessman with two businesses and a residence. He's happily married. After marrying, he quit drinking. Consequently, people like him. He attends a Nizhny fair for business. As he is getting ready to leave, his wife tells him not to go because she had a bad dream the night before. Ivan ignores her superstition and leaves.

Midway, he meets a trader companion and they go on. They check into an inn, spend time together, have supper, and then go to bed separately. Next day, Ivan wakes up early and doesn't want to wake his friend, so he travels alone.

Soldiers stop Aksionov about 25 miles down the road and accuse him of killing his friend because they saw him with the guy the night before he was killed and because his early morning departure seemed suspicious. They discover a bloodied knife as they go through Aksionov's things. Witnesses from Aksionov's hometown say that he is a kind guy, but that he used to drink heavily at past. Even Aksionov's wife is beginning to have doubts about his virility. As a result of his conviction, he will spend the next 26 years in a Russian jail.

While he is jailed, his wife visits him and begins to think that he is responsible for the murder. After 26 years in jail, Ivan gets respect from other prisoners and guards. The next day, a group of new prisoners arrives, and one of them is Makar Semyonich. Makar begins to socialise with other people and often shares his experiences with them. As Ivan begins to suspect him as the merchant's murderer, he has a strong feeling that it was him. Despite this, he keeps silent.

One day, guards notice someone making a tunnel to escape. Ivan is aware that the person responsible for digging the hole is none other than Makar Semyonich. Ivan remains quiet when cops enquire about the hole. After seeing this act of kindness, Makar goes to Ivan at twelve in the night and admits that he was the one who had assassinated the merchant earlier that night at the inn where they were staying. But Ivan forgives him and feels like a huge weight has been lifted off his shoulders.

Makar provides the police with a full confession of his involvement in the crime, which allows them to begin the process of freeing Ivan from prison. At this point, Aksionov has given up on returning to his family and is content with being with the Lord. Ivan dies in jail before he's released. However, the truth was more significant than his demise. He wasn't a killer, therefore he probably died in peace.

Message of the story:

This is a story about the truth, and despite the passage of time—decades, even centuries—the truth can never be buried. Discoveries of the truth are a sign that God has done justice.