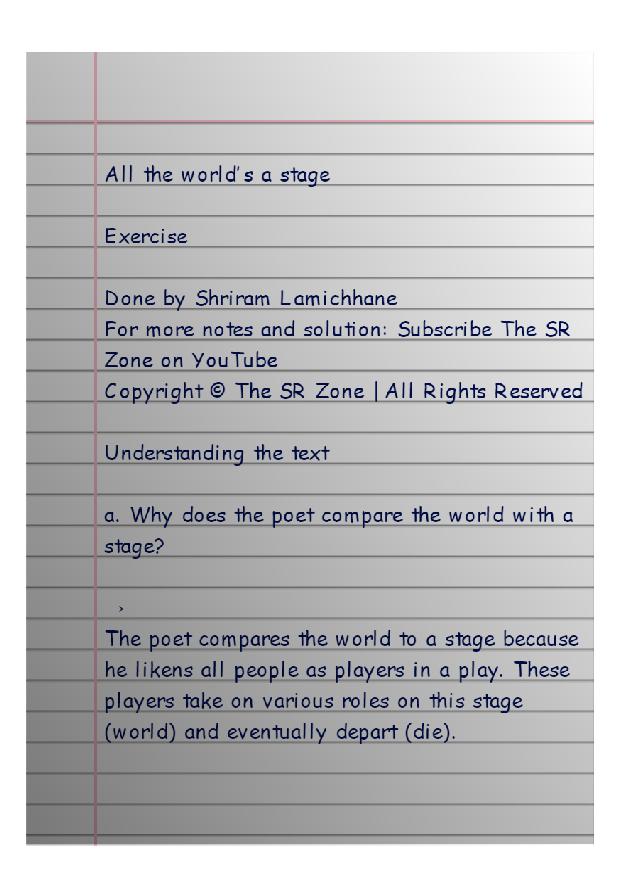 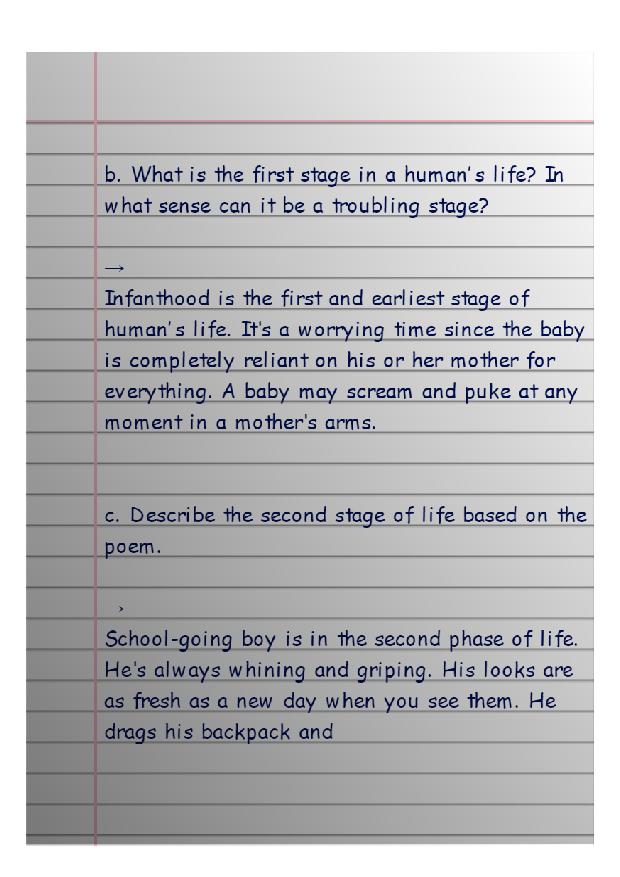 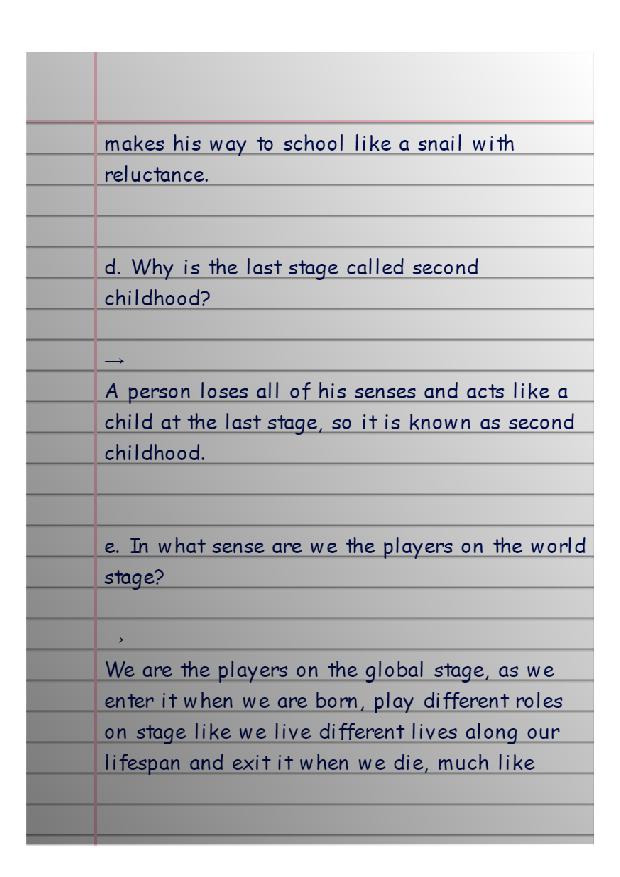 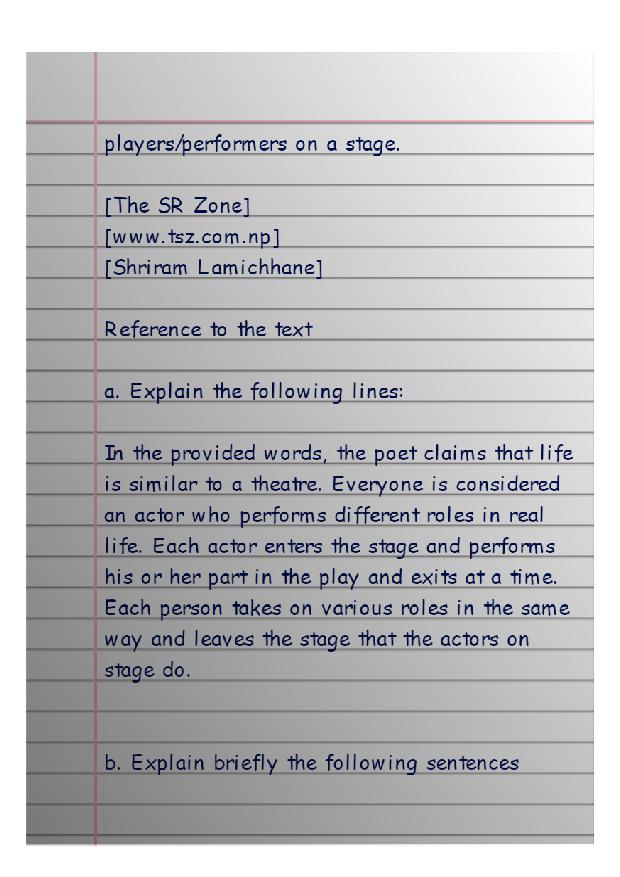 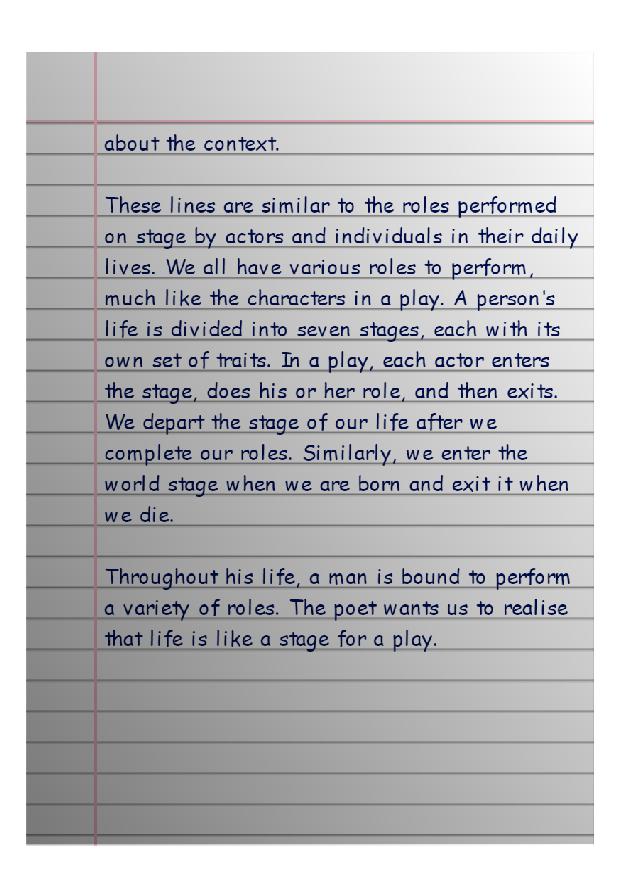 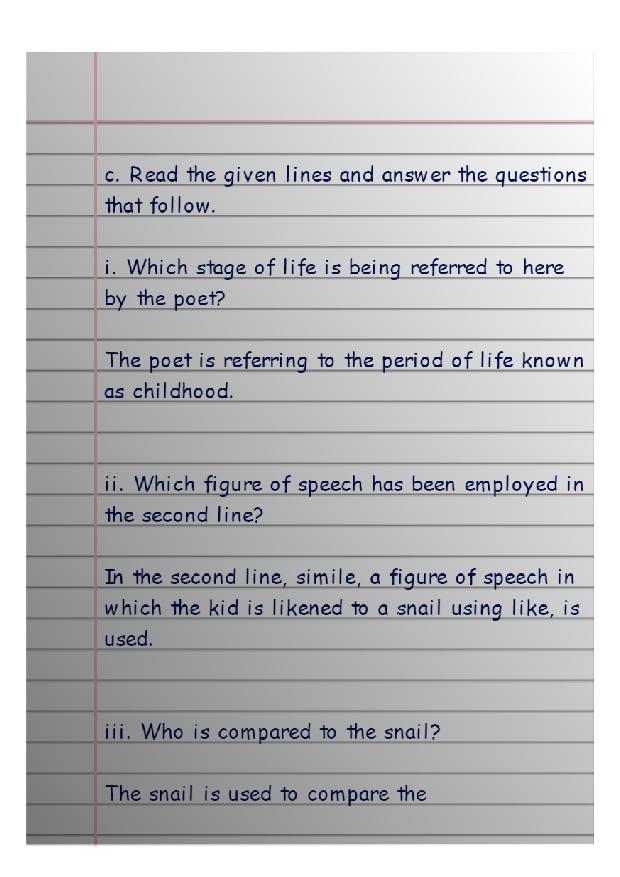 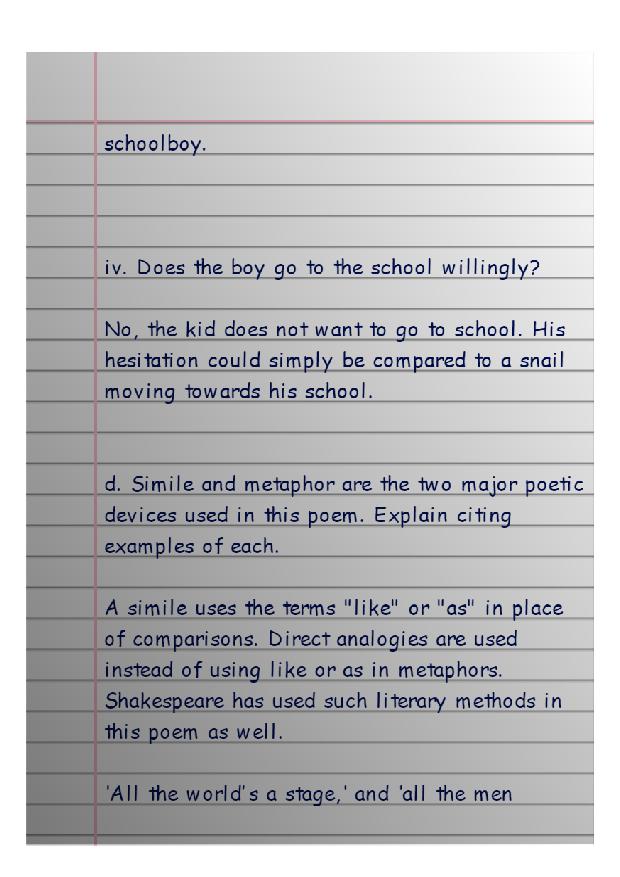 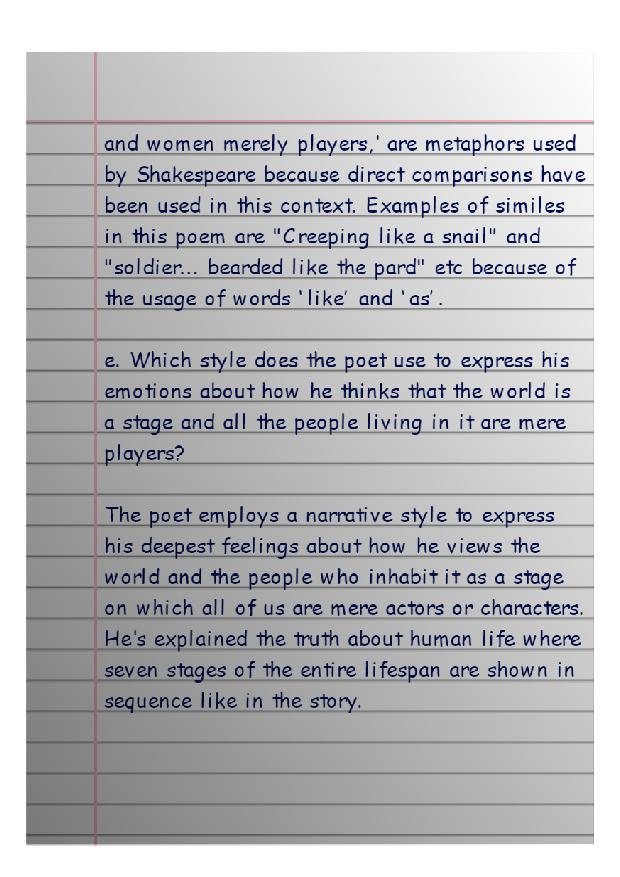 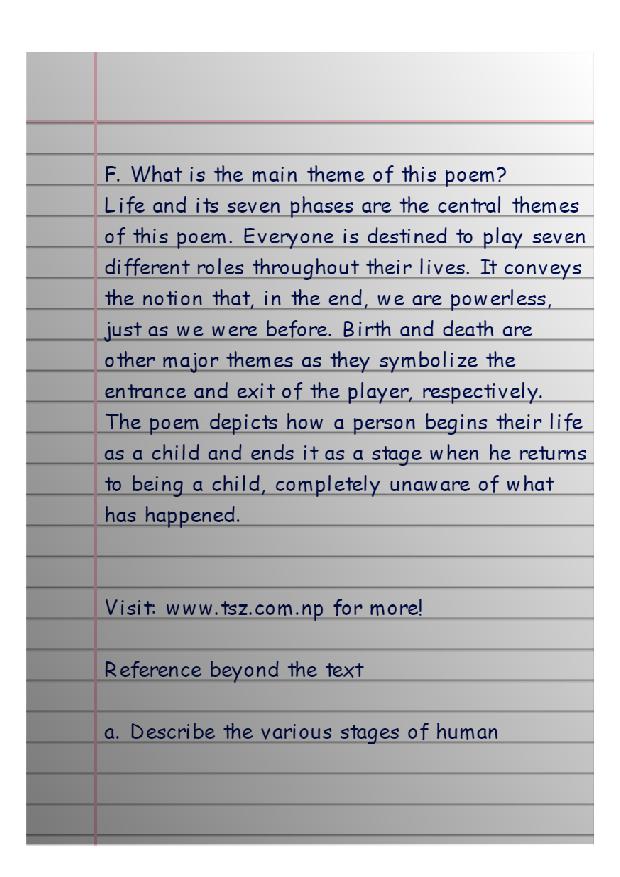 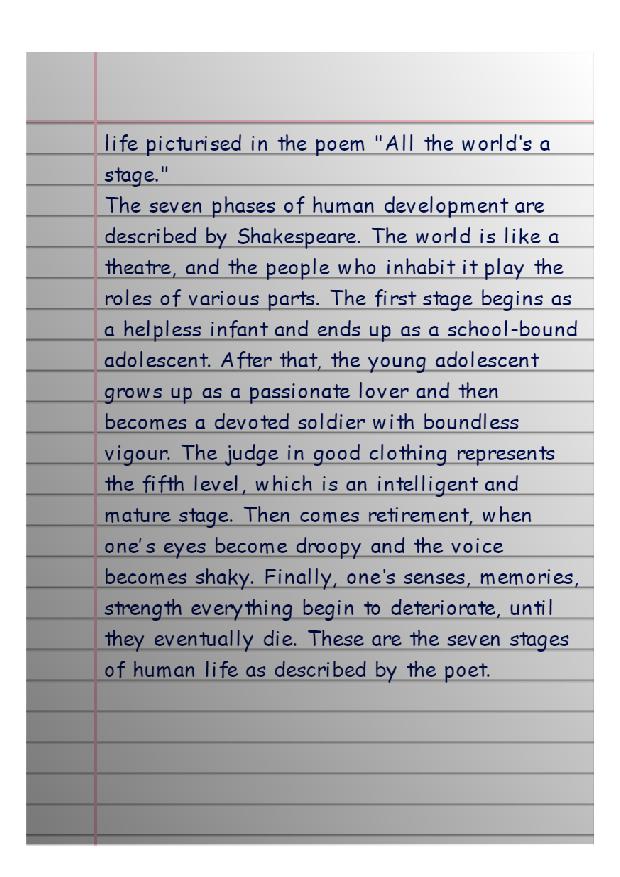 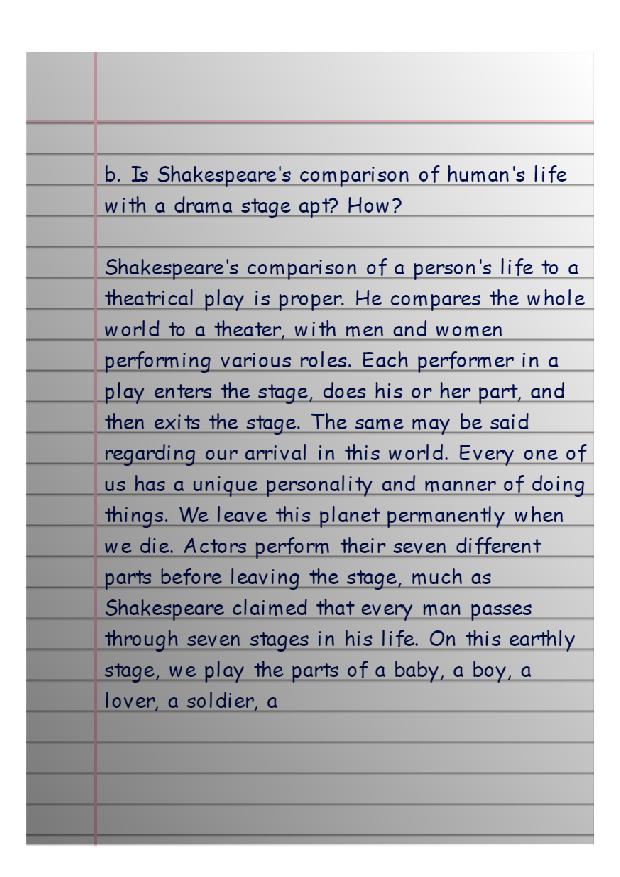 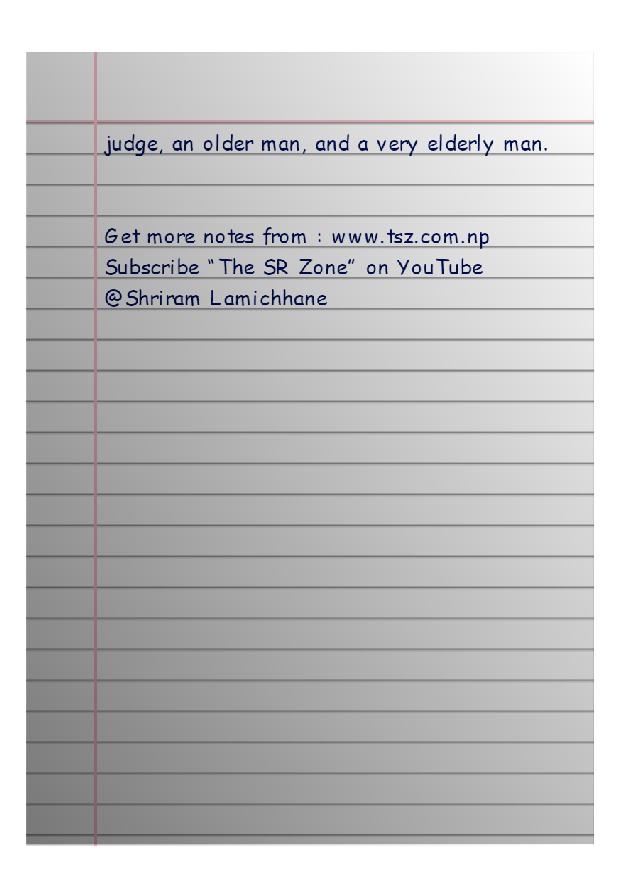 All The World's a Stage by William Shakespeare Summary

William Shakespeare's "All the world's a stage" is a realism poem. It was published in 1623. The poem's central subject is that man has lost the game of life. The world, according to Shakespeare, is a stage, and everyone is a player. He claims that over the course of a man's lifespan, there are seven phases. In his lifetime, he plays seven roles and then departs from the world's stage.

A man's formative years are known as his childhood. He had fun with his mother's arms around him while he played. During this time, he may vomit or cry a lot.

At the second stage in his life, the guy is an apathetic secondary school student. In the third stage, he transforms into a passionate lover. He's too busy writing love songs for his lover to get attention from his lover.

His aggressiveness and ambition had increased at the fourth stage. In everything he does, he's trying to build his reputation. He decides to join the military because he wants to defend his nation. He matures and gains knowledge in his fifth stage, when he becomes a fair judge. He appears with loose trousers and glasses in the sixth stage.

It's as if his once-masculine voice has been replaced with a childlike trill. His second childhood is the last period. Slowly, he begins to lose his senses of sight, sound, smell, and taste, as well as his ability to perform his previous duties.

As a result, Shakespeare's poem 'All the World's a Stage' depicts the seven phases of a man's life.

All the world’s a stage Questions Answers

a. Why does the poet compare the world with a stage?
→  The poet compares the world to a stage because he likens all people as players in a play. These players take on various roles on this stage (world) and eventually depart (die).
b. What is the first stage in a human’s life? In what sense can it be a troubling stage?
→  Infanthood is the first and earliest stage of human’s life. It's a worrying time since the baby is completely reliant on his or her mother for everything. A baby may scream and puke at any moment in a mother's arms.
c. Describe the second stage of life based on the poem.
→  School-going boy is in the second phase of life. He's always whining and griping. His looks are as fresh as a new day when you see them. He drags his backpack and makes his way to school like a snail with reluctance.
d. Why is the last stage called second childhood?
→  A person loses all of his senses and acts like a child at the last stage, so it is known as second childhood.
e. In what sense are we the players on the world stage?
→  We are the players on the global stage, as we enter it when we are born, play different roles on stage like we live different lives along our lifespan and exit it when we die, much like players/performers on a stage.