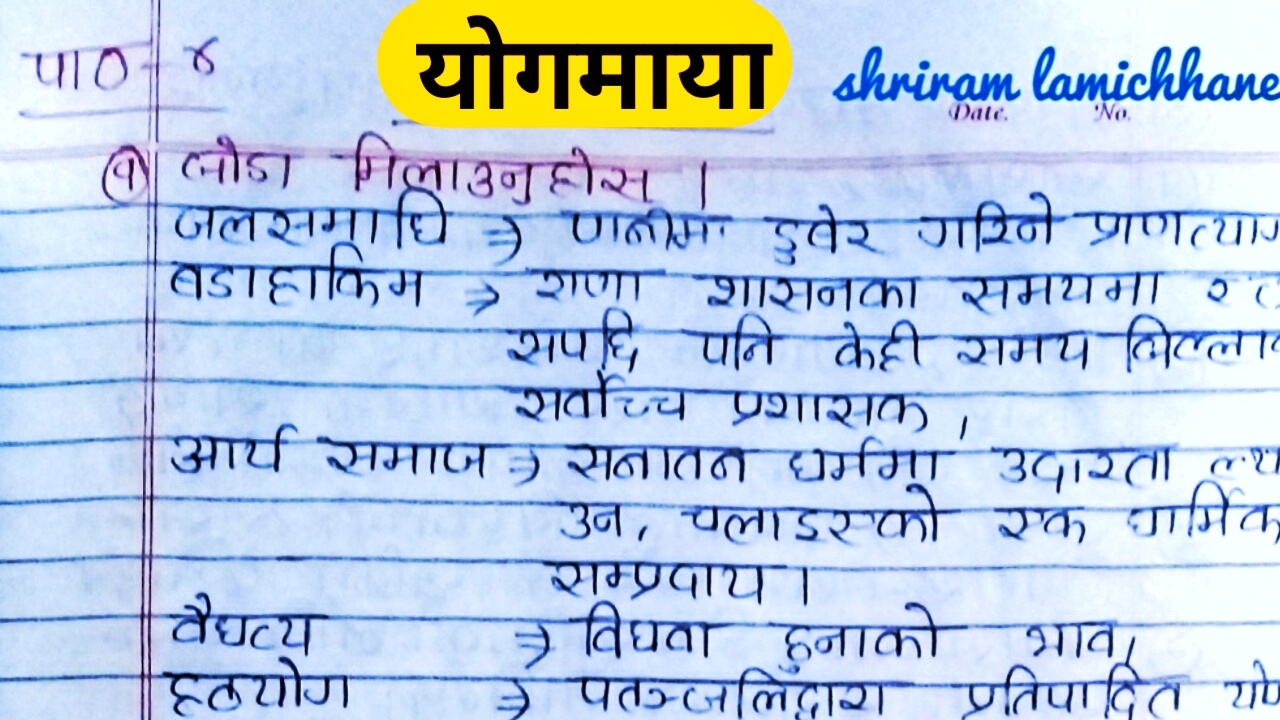 What if there were notes with all the answers to the questions in Nepali Unit 4 "Yogmaya"? You're in luck since you've arrived to the perfect location. The solutions to the Yogmaya class 11 exercise questions are listed below.

I've published a video of these notes to my YouTube channel, The SR Zone, if you'd want to view it. You don't need to be worried because you've come here to take notes. All notes are guaranteed to be written in high-definition handwriting.

Note: These Questions answers are provided only for helping and learning  puposes. The SR Zone is not responsible for any kind of issues. Notes have been written by Shriram Lamichhane. If you found these notes somewhere else, kindly report to us so that we could take action.

Yogamaya Neupane is a historical woman leader who bravely revolted against the autocratic government and feudal power. She born in B.S. 1824  as the first child of Shrilal Neupane and Chandrakala Neupane.

Yogmaya always worked to raise a strong voice for the end of class, ethnic, gender, religious, cultural discrimination, monopoly and slavery for the sake of building a just and egalitarian society through social transformation in the historical period of Nepal.

Yogmaya had bravery, great for social transformation with a wealth of indomitable courage, perseverance, bravery, heroism with an unwavering heart like Tiger, she was the warrior Nepal is found incarnated in the lap of the mother. Similarly, She did yoga, penance, meditation, contemplation, and discourse to build a non-discriminatory justice and egalitarian ideal and civilized society by developing social awareness.

When yogamaya was seven years old, she got married at a young age without knowing her husband and became a widow within two years. Despite Rejection of home, family, and society she remained at home till the age of 14 bearing physical and mental torture, her mother-in-law and Nanda tortured her in her "Maita". After being neglected by both her family and her Maita, she revolted and reached Assam.

Though she was Alone there, she married a man of "Kandel" Surname against the death rites because of her loneliness, but what an unfortunate! her husband died within a few years. After that, an emotional woman, Yogmaya married a "Dotel", agreed to marry her, and gave birth to a daughter, Nanakala.

Yogmaya was developing a new way of looking at life and society through social, religious work, the reformed consciousness of Aryan societies, and the company of saints. Consciousness was awakening. Due to her childhood life and the anomalies of the society in which she lived Freed from the lure of society, the seeds of asceticism were sown on her. To do penance and to give meaning to the ascetic consciousness, she moved with daughter and brother in her own birthplace.

In 1873, she reached Bhojpur - Majhuwabensi to be at home. In society, She used the knowledge and experience she had learned in Assam by participating in Puja, Purana and Chautari. With Pandit She studied the Scriptures and began arguing with men in the community. Reached with Mahaprabhu Abhayananda II of Swargadwari of Pyuthan.

After taking initiation, she became a monk and built a hut in Mazhuvavensi and lived alone as a Social seeker through knowledge and intellect. As a leading woman, her yoga practice was also targeted there. Her stream flow discourse to her.

As the devotees' reverence grew, they moved to a more spacious hut in Ufraulitar. In 1888 After the Arun River flooded her hut, she moved to Gondini in Irkhuwapari. Devotees affected by Yogasadhana and Tapasya Wherever they moved, they would reach. She used fasting and snacking in penance. Even in cold weather and atmosphere just to make oneself strong, she used to dip half of her body in the river Arun for many days and then in summer. She would stay warm.
As a result, In 1882, she crossed the Khampalung Himal with her followers and performed penance. In 1887, she lived in Thumka in the high hills of Bhojpur and did penance for 23 days. The purpose of all these penances was to give concrete form to the desire for social reform, free from all kinds of greed and lust in life.

Protest against the perversion and anomaly prevailing in the society after starting the ascetic life due to the awakening of social consciousness in Yogmaya has begun to take place. She openly opposed caste discrimination and caste system. She was involved in religious and cultural activities. The so-called orthodox criticized her for creating an environment where all non-Dalits could be involved without discrimination. She, As a staunch opponent of gender discrimination, she was a staunch opponent of child marriage, sati and slavery, but a voluntary widow. She supported marriage. Chandra Samser's Vs. No.sheopenly praised the proclamation of the end of slavery in 1882 She strongly condemned and openly opposed the discriminatory wrongful judicial practices of the day.

Yogamaya, who believes that religion should be viewed from the perspective of humanity as it is a religion that is humane, emphasizes on equality Urging the then ruler to ask for 'begging for the true religion'. Even though people were sent,she was limited in assurance, so she turned despair into power and went to Kathmandu to fight Samser. She became a rebel after her request to fulfill her promise was not implemented.

In, October 27, 1885 The government announced that it would take Agni Samadhi along with all its devotees if they did not beg for the true religion. For Agni Samadhi With full preparation, 240 devotees voluntarily signed up, but their plan failed after the government banned it . The government jailed 11 people and detained her and her female devotees for a few days, Which is the first historical event of captivity of women and the then autocratic government and feudal . It was a uniquely courageous and powerful revolt against world power led by women.

After her failure, her rebellion with asceticism escalated and she became immersed in deep sadhana, meditation and penance. Fire Irritated by the Samadhi scandal, the autocratic feudal government became more barbaric and oppressive. Though She had the state power challenging, she secretly planned to take "Jalasamadhi" ( Act of doing mass suicide ) against the ruler with she and her followers.

The idea was the right path to salvation.

On the day of Harishyani Ekadashi on July 7, 1868, before sunrise, 'Let there be an end to iniquity. Dharmarajya should be established, the door of salvation should be opened. She did. Therefore, through yoga practice, penance, meditation, contemplation, discourse and social behavior, such as sati, slavery, untouchability. To carry out a powerful and unique revolution for the establishment of a just, honest and egalitarian society free from vices and superstitions. Yogamaya's contribution has been immortalized in the history of human civilization. Named 'Sarvarth Yogavani' in memory of Yogamaya.

With the publication of her work, the discussion of her indomitable courage has spread beyond Nepali geography to the United States and Europe.

A novel titled Yogamaya based on her biography has also been published. From her inspiring biography, she rose above her personal interest and considered national interest above all, That we should dedicate ourselves to building an exploitation-free, corruption-free justice, egalitarian, ideal, and civilized society. Nationalist and humanitarian teachings and messages are adaptable from her biography.