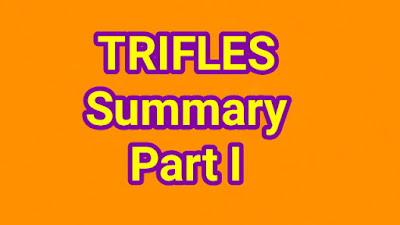 Watch this video, I am very sure that you will grab the summary of trifles.

Trifles is a one-act play by Susan Glaspell. It's a mystery story of a homicide. It was first performed by Provincetown Players at the Warf Theater in Provincetown, Massachusetts and was staged in August 8, 1916. The short information about the author of this play is given below:

Susan Glaspell was a playwright, novelist, journalist and actor from America. She was born in 1876. She was the founder of Provincetown players and her husband George Cram Cook which was the first modern American theater company.

Her most famous works are "Alison's House", "Trifles" etc. She received the Pulitzer Prize for this Drama in 1931. She died in 1948.

"Trifles" is inspired by a REAL EVENT

The story is based on the homicide of John Hossack, age of 60, while Susan Glaspell is a reporter for the Des Moines Daily News. His wife Margaret was arrested for his homicide. Glaspell turned this real incident as play "Trifles" into a nutshell, she retitled it as "A Jury of Her Peers".

Mrs. Peters as the Sheriff's wife

The play is set in John Wright's abandoned farmhouse. It is a lonely place at the bottom of a pit where the road is barely visible.

The motive for the story is to expose the killer of John Wright. The characters suspect whether homicide should commit by his wife or by someone else. The male characters doubt Mrs. Wright. So they focused on finding evidence in the kitchen.

The story begins in the farmhouse of John Wright. The kitchen looks dirty.The District Attorney, the Sheriff and Mr. Hale entered the house.

They were followed by Mrs. Hale and Mrs. Peters. Women are standing at the door. They do not meet the men who are close to the fire and getting warm of fire.

The district attorney assures that nothing is involved in the house. He begins to investigate Mr. Hale by asking him about the events of that day.

Mr. Hale learns about the death of Mr. Wright. Mr. Hale responds by saying that he visited Wright's home to inquire whether he will join Hale going to Telephone. He says that Mrs Wright was sitting on a rocker going up and down.

She was holding a apron in his hand and she looked nervous. He found her behaving strangely.

When he asked her, where his husband was, She said her husband died at the top with a rope around his neck. She said someone strangled her husband while he was asleep. Henry Peter comes to help Mr. Hale .

Henry went to bring the case detective (the officer in charge of investigating the violent, sudden or suspicious death). When Mr. Hale tells her about telephone, she laughed. Then she looks scared.

George Henderson investigates in the kitchen. The glass jar of fruit preservative is broken because of cold. It has made the cupboard messy.

Mrs. Peters interrupts that Mrs. Wright was worried about it. Mr. Hale says that the women worry over the trifles.

Henderson criticizes Mrs. Wright for the dirty towels and unmanaged stuffs in her home and also comments on her house making skills. The men then go upstairs in search of evidence.

Mrs. Hale and Mrs. Peter gather things for Mrs. Wright - specially clothes for her since she was arrested in hurry the day before.

Henderson allows Mrs. Hale and Mrs. Peters to gather few things for Mrs. Wright. Mrs. Hale arranges the pan in the kitchen disturbed by men during their investigation. She does not like men criticizing women.

They take clothes for Mrs. Wright from her closet Mrs. Hale remembers Mrs. Minnie Wrights as an unmarried Minnie Foster.

She was very happy then. She used to sing passionately. She was no longer happy after her marriage. She has now asked only for her apron and a shawl. She is worried about her fruit preservative.

Mrs. Peter says that her husband suspect how could a wife not wake up during a murder. Mrs. Hale mentions that her husband found a gun in the house. It is suspicious to use a rope to murder instead of the gun.

Mrs. Peters finds a large sewing basket. It has bright pieces. She was piecing a quilt. She was following log cabin pattern in which the fabric is pieced around a center square. Mrs. Hale wonders if she was going to quilt it or just knot it!

The men go to barn in search of evidence. They laugh listening to the women's discussion about the blanket to be quilted or knotted. Dismiss it as trifle.

Mrs. Hale observes strange things. Half of the dish-towel is clean, Loaf of bread outside the bread box, Unfinished quilt, One block of the quilt is made untidily than the other stitches (Shows nervousness).

Mrs. Peters looks in a cupboard to find paper and string to complete the quilt but instead finds a birdcage without a bird. Mrs. Hale remembered a man who sold canary. May be a cat has got it. But Mrs. Wright did not have a cat. She was upset when Mrs. Peters cat went into her room. The door of the cage was broken.

Mrs. Hale worries for not visiting Mrs. Wright all these days. She knows Mr. Wright was a hard man.

They do not have children. So the house must be quiet. Mr. Wright goes out for work all day. He was not a good company when he was at home. So Mrs. Wright must have had the canary as her companion.

Mrs. Hale says about Mrs. Wright, "She was kind of like a bird herself-real sweet and pretty, but kind of timid and fluttery". But she has changed after her marriage.

They find a birdcage. They Think that a cat might have caught the bird.

Searches for scissors in it.

Surprised to find the dead bird wrapped in a silk cloth.

Horrified to see that its neck is wrung.

Men enter from the farmhouse.

The women hide the box among the quilt pieces.

Mr. Henderson mocks at them, asking whether the blanket is to be quilted or knotted.

Mrs. Peters answers decisively that Mrs. Wright must have planned to knot it.

The men find no evidence in the farmhouse

The rope is from Wright's home itself.

They again go upstairs to analyse the rope inch by inch.

Women have a new understanding about Mrs. Wright.

Mrs. Hale says Mrs. Wright was trying to bury the bird that she loved in the pretty box.

Mrs. Peters remembers her childhood days, when a boy killed her kitten with a hatchet.

She was furious to hurt the boy but she was not allowed to do so.

Mr. Wright did not like the bird to sing. He must have killed it. He also stopped Mrs. Wright from singing.

It is awful that after many years of emptiness, the only bird that sang was killed.

However she feels the law has to punish Mrs. Wright for the crime of killing her husband.

Recounts Mrs. Wright in white dress with blue ribbons singing in the choir.

She is guilty for not visiting her.

Consider it as a crime which has to be punished.

Mrs. Hale decides not to tell anyone about the broken fruit preservative.

Mrs. Peters wraps the bottle of preservative that is not broken in a petticoat.

They do not wish to hurt Mrs. Wright anymore.

Mrs. Peters knows that men would just laugh at times for getting upset over the dead canary.

Mrs. Hale says, "We live close together and we live far apart. We all go through the same things, it's all just a different kind of the same thing".

The men enter saying that they need definite evidence.

Mr. Henderson is not satisfied. He wishes to stay in search of any other clue as they could not proceed with the case.

Mr. Henderson checks at random as the women may not have taken any dangerous things.

Moreover, Mrs. Peters is also tied to law being the sheriff's wife.

The sheriff and the coroner go to have a look at the window in the other room for any evidence.

Mr. Henderson mocks at whatever women do as trifles

MRS PETERS throws back quilt pieces and tries to put the box in the bag she is wearing. It is too big. She opens the box, starts to take the bird out, cannot touch it, goes to pieces, stands there helpless. Sound of a knob turning in the other room is heard. MRS HALE snatches the box and puts it in the pocket of her big coat. And, here ends the play.

Knotting the quilt - killing her husband

How is the title of "trifles"?

The title of the play is ironic.

The irony is that the women discover the true motive of the murder.

It was written during the first wave of feminism.

It was an early feminist drama.

The play contrasts how women behave among themselves and before men.

Hope you understood this detailed and easy summary of trifles written by Shriram Lamichhane.