I Was My Own Route Exercise class 12 English: Questions Answers 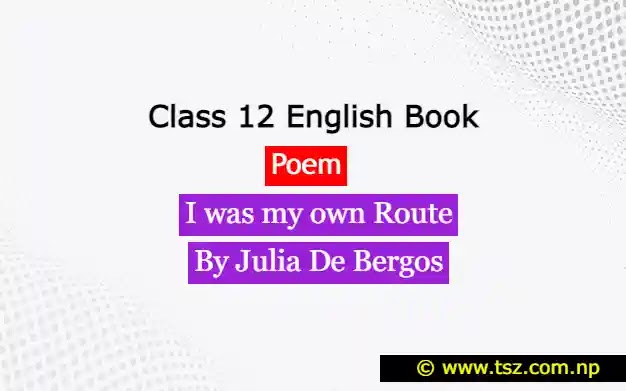 I Was My Own Route Exercise: Questions Answers and Notes Class 12 English Book

a. Why did the speaker try to be the way men wanted her to be?

The speaker tried to be the way men wanted her to be because she was living in a society where females were anticipated to be like what men want them to be like with their dominant male idea.

b. What do you understand by her feet 'would not accept walking backwards'?

‘Her feet would not accept walking backwards' means that she had no intention of walking after males. She wanted women on an equal footing with males in the race, with the ultimate goal of liberation. She was unwilling to accept the male-dominated view that women were less valuable than men.

c. Who are the old guards? Why did they grow desperate?

The old guard are those conservative minded people of society who are highly influenced and supportive to male supremacy ideals. Julia was making progress toward improving the lives of the impoverished women and fighting for their liberation, that's why they became fearful and grew desperate.

d. How did the speaker have ‘a feeling of intimate liberation'?

The speaker had a feeling of intimate liberation because she was on the new path where she transcended the barrier of patriarchal society and rejected the old one set by males.

e. Why did the desire to follow men warp in her?

The desire to follow men wraps in her because of patriarchal society and its norms prevailed in the society. She wants to feel liberation and pleasure but she is forced to follow traditional concepts and ideas predetermined by men.

a. What does the speaker mean when she says she was playing a game of hide and seek with her being'?

When the speaker says that she was playing a game of hide and seek with herself, she is expressing that her identity was only a game to be performed under patriarchal ideology. She was completely unknown on what she was, what she had to do and how she should behave. However, she is now expressing her lot of anger and criticism of patriarchal concepts that confine women to four walls. She wants to be free of gender stereotypes and pursue her own goals.

b. Why, in your view, was her back ripped by the old guards as she was advancing forward?

Her back was ripped out by the old guard because old guards believed in the patriarchal system a lot and they did not want any women to go beyond their rules. But in order to achieve true independence, she must overcome oppression and race-based discrimination. As a result of the social constraints imposed by the society's old guard, she suffers a great deal and has her back ripped by old guards with norms, rules and traditions as threat.

C. What, according to the speaker, did it feel like to be free?

The speaker says that being free is like flying like a bird without any societal or gender limitations. For her, being free is the same as choosing her own route and doing her own thing. It means to walk and feel like a man in society, and to obtain long-awaited emancipation.

d. Why does the speaker prefer the present to the past?

The speaker prefers the present over the past since her past was bad. Her history was a mess. Patriarchy caused her a lot of pain. The patriarchal restrictions hampered her. She was considered as a toy to be played and a joke to be laughed at. She was unaware of her heart's independence. Her desires were restricted. She was abused and starved by family and society. Currently, she is free of masculine notions and freed. Male ideology and fear is slowly fading out. Female freedom is beginning to take hold, and male dominance is disappearing. Her acts and decisions are her own. She can work and go anywhere. So, she prefers the present over the past.

When John Donne wrote the poem "No Man Is an Island," he said that "No Man Is an Island Entire by Himself." He's referring to the whole human species as a whole, and their role in shaping society as a whole. Because no one is fully self-sufficient, everyone must depend on the support and companionship of others to flourish. Keeping society equal in the name of rights, freedom, fairness, choices, chances, and many more is a position that I wholeheartedly endorse. To flourish, people need to be a part of a larger group, and the expression "no man is an island" reflects this notion.

I support John Donne for the notion of providing equal opportunities to both men and women and their co-existence. But, Julia De Bergos, completely dismisses the importance of male roles in societies.Her words, in reality, is nothing more than an outlet for her resentment towards males. The man and woman are two wheels on a cart. It is impossible for the cart to go ahead if one of its wheels has been broken.

a. Write an essay on My Idea of Freedom.

My Idea of Freedom : an essay

The capacity to act or adjust one's behavior without hindrance is often referred to as "freedom." According to the eminent physicist Albert Einstein: "Freedom in any event, is only conceivable through struggle. I think of freedom as the ability to do what you want without interference from anybody else. And it's also a mindset in which one has complete freedom to do anything they want, whenever they want.

Depending on who you ask, freedom means various things to different people. For me, freedom is the power to make one's own decisions. It is a fundamental human right that must exist from the birth of humans. Neither can it be seen, felt or accessed by the senses of touch, sight, hearing or taste, but it must exist. There are different ways in which freedom may be utilized, and it is not a universal term.

b. Not all people, however, seem to agree with the kind of freedom upheld by Burgos in this poem. For example, William Faulkner, in his novel Requiem for a Nun, says, “The past is never dead. It's not even past. All of us labor in webs spun long before we were born, webs of heredity and environment, of desire and consequence, of history and eternity." Do you agree with Faulkner? Why? Why not?

Not everyone will like Burgos' poetry "I Was My Own Route."  William Faulkner, in his novel Requiem for a Nun, says, “The past is never dead. It's not even past. All of us labor in webs spun long before we were born, webs of heredity and environment, of desire and consequence, of history and eternity.

When is the best time to ask this question? As soon as you say anything, it's gone, leaving behind a memory. As a result, we live in the past at all times, creating memories and doing actions. Since time goes on, the past will always exist. Thoughts of the past are living things. Everything we do and witness is recorded in history. Whatever happens, it becomes part of our memory, but memories remain forever. That we're always in the past.

Julia Burgos' poem expresses a desire to forget her past. She wishes to get rid of her difficult past because it has haunted her for so long. It is, however, impossible to do so. The freedom that Julia de Bures fights for completely disproves the notion that there was a past too. She wants to transcend the presence of men in order to create her identity by denying the past and disapproving the existence of men. However, the world will come to a halt if men are avoided. The fact that she's a radical feminist means that she's outraged by the way men dominate women. For the sake of humanity's survival, it is critical that both sexes be present.

Our past shapes our present and future according to William. His viewpoint is practical. We can't ignore it. I agree with him after reading these writers.

Also Read: I Was My Own Route Summary