Traditional values, customs, and cultures are passed down through the generations via various means, among which oral tradition is what the most reliable and time demanding method is.

Oral tradition is the method which requires attentive hearing to our elders. We can learn how to maintain them and traditional traditions if we listen to elderly people. Because of modern technology and lifestyles, young people are unable to fully appreciate all of the traditions that their elders have passed down to them.

It is our responsibility to choose the right traditions that are necessary for human survival. Traditional cultures are passed down via music, dance, tales, festivals, and a variety of other activities connected to cultural values. We can obtain the right knowledge through oral tradition.

In oral tradition, if there are any errors, they may be rectified right away. However, since traditions are in written form, literal tradition does not rectify the cultures with time and situation. If the appropriate things are not written in a suitable way, the message may be misinterpreted. So, oral tradition is preferable to written tradition. 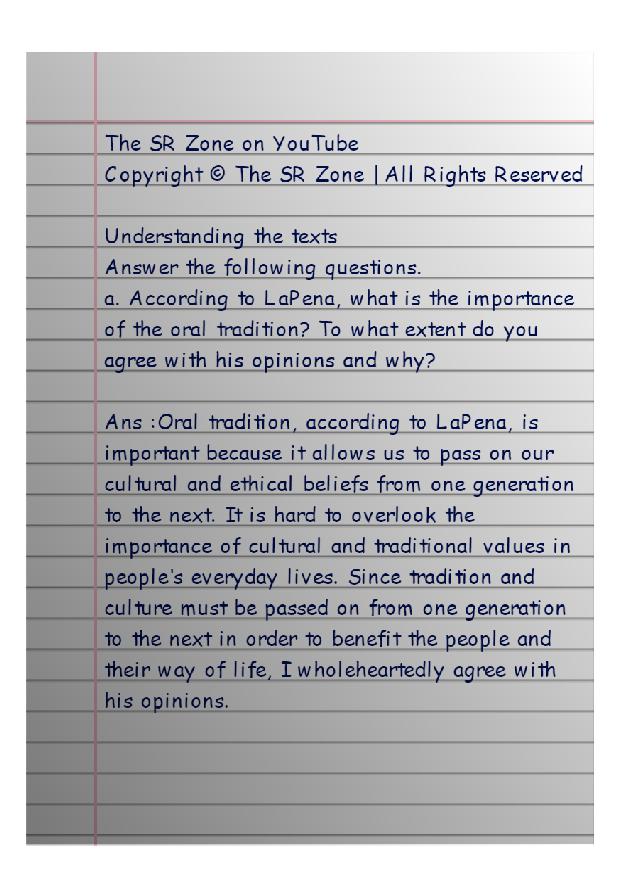 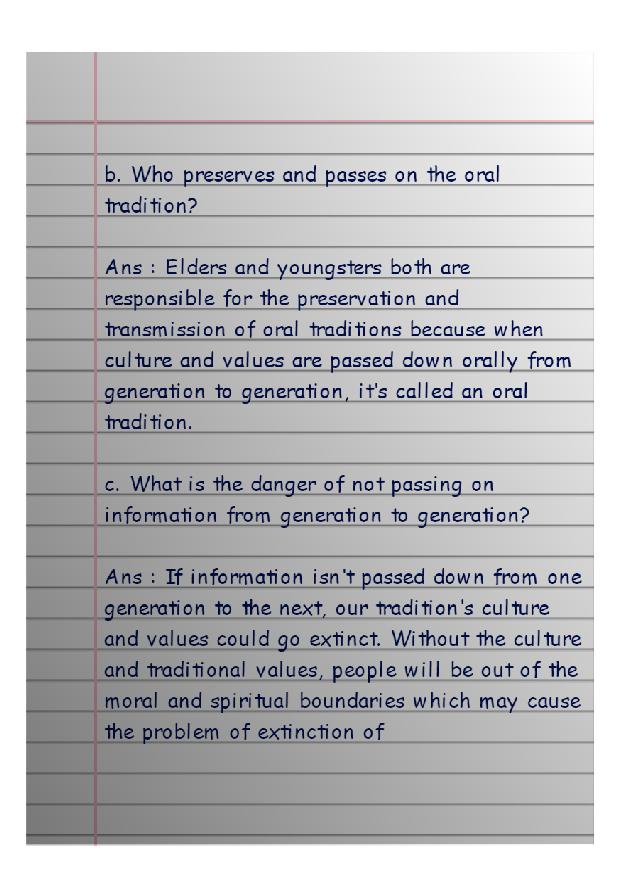 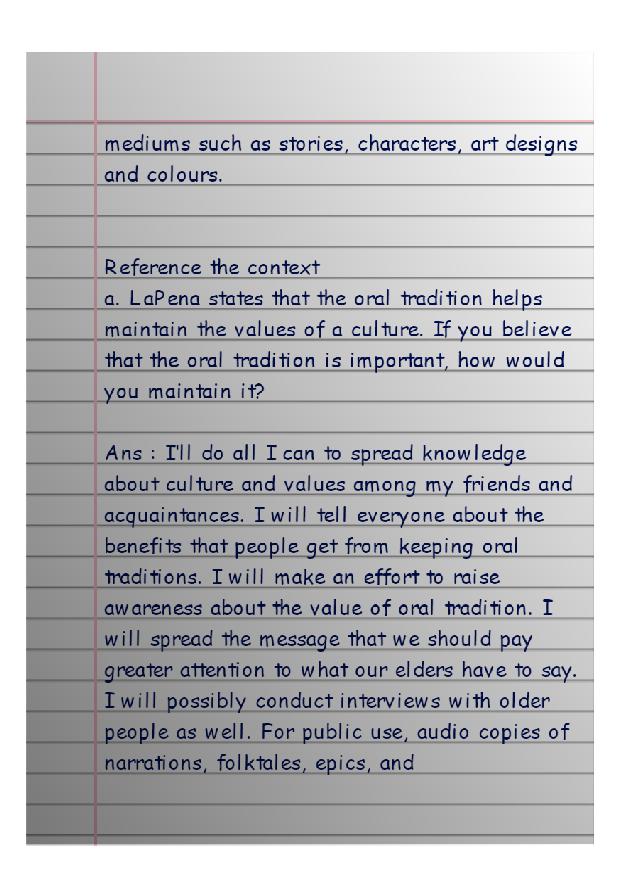 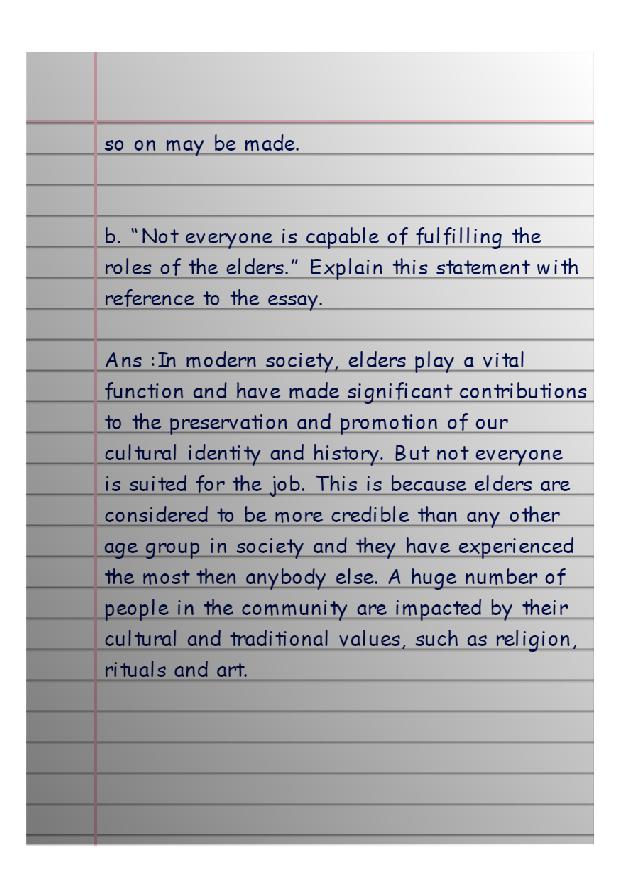 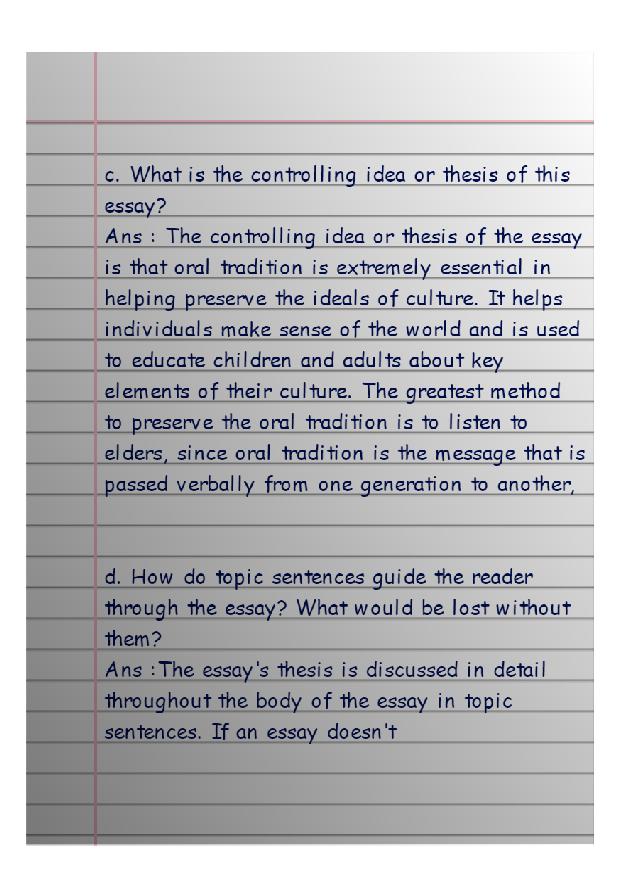 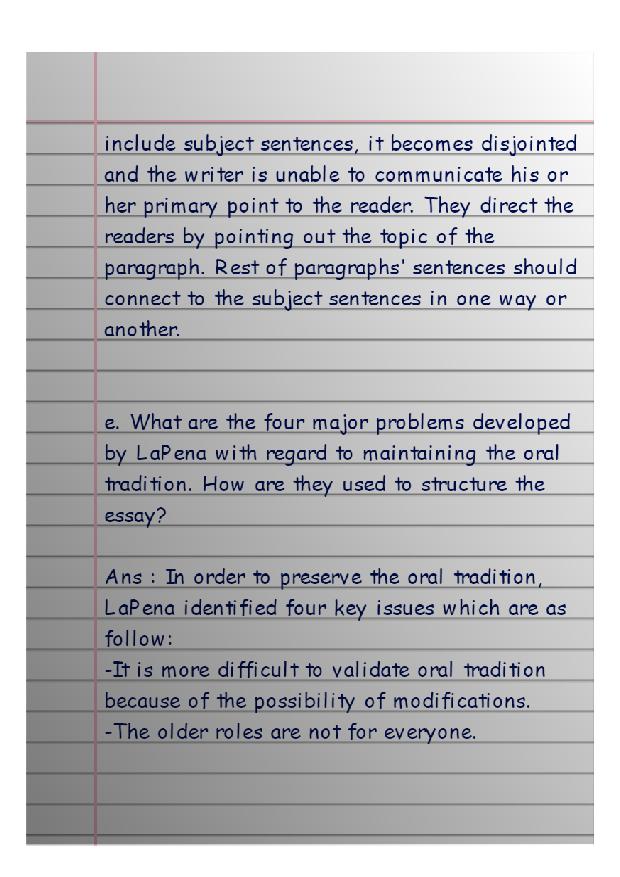 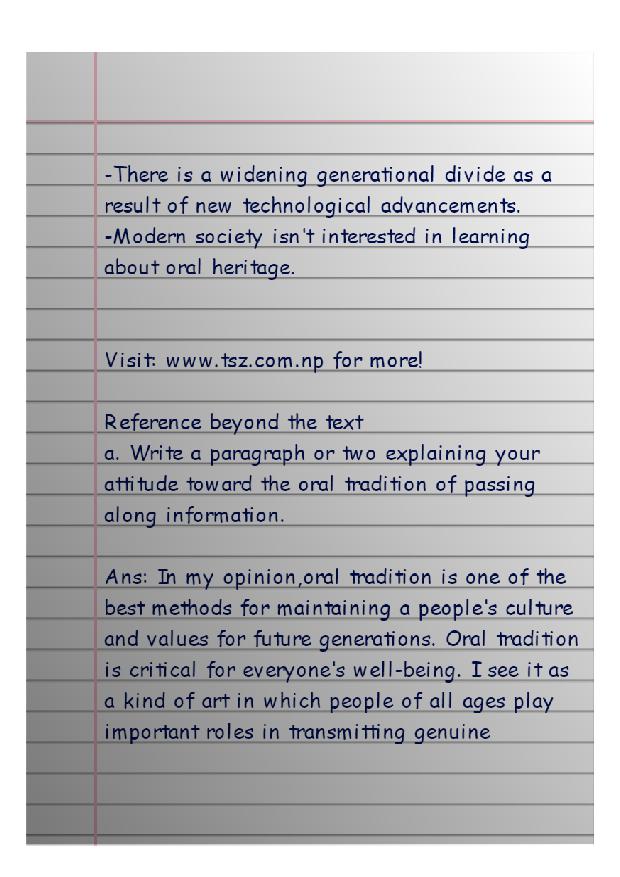 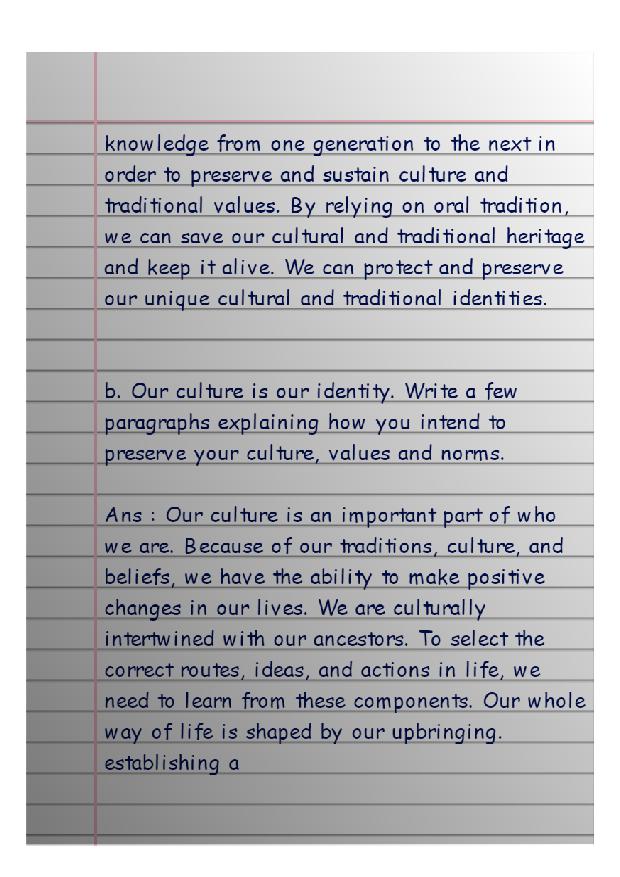 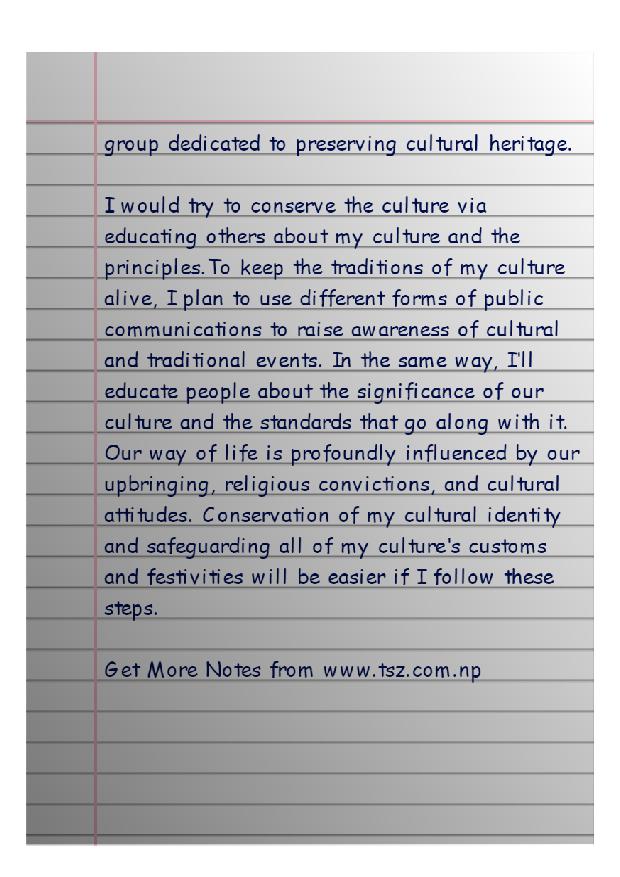 Go to How to Live Before You die? Exercise : Questions answers and Summary (Steve Jobs)

Understanding the texts
Answer the following questions.
a. According to LaPena, what is the importance of the oral tradition? To what extent do you agree with his opinions and why?
Ans : Oral tradition, according to LaPena, is important because it allows us to pass on our cultural and ethical beliefs from one generation to the next. It is hard to overlook the importance of cultural and traditional values in people's everyday lives. Since tradition and culture must be passed on from one generation to the next in order to benefit the people and their way of life, I wholeheartedly agree with his opinions.
b. Who preserves and passes on the oral tradition?
Ans : Elders and youngsters both are responsible for the preservation and transmission of oral traditions because when culture and values are passed down orally from generation to generation, it's called an oral tradition.
c. What is the danger of not passing on information from generation to generation?
Ans : If information isn't passed down from one generation to the next, our tradition's culture and values could go extinct. Without the culture and traditional values, people will be out of the moral and spiritual boundaries which may cause the problem of extinction of typicality and originality.
d. What is the difference between oral tradition and literary tradition?
Ans : An oral tradition is one in which cultural and moral values are transmitted down from generation to generation by means of oral transmission. At any moment, it is possible to amend or change oral tradition errors. It is difficult to repair flaws in this literary tradition as it includes the written and printed traditions.
e. How does LaPena establish a relationship between art and the oral tradition?
Ans : The oral tradition can be more effectively transmitted to the next generation by the use of various artistic mediums such as stories, characters, art designs and colours.
Reference the context
a. LaPena states that the oral tradition helps maintain the values of a culture. If you believe that the oral tradition is important, how would you maintain it?
Ans : I'll do all I can to spread knowledge about culture and values among my friends and acquaintances. I will tell everyone about the benefits that people get from keeping oral traditions. I will make an effort to raise awareness about the value of oral tradition. I will spread the message that we should pay greater attention to what our elders have to say. I will possibly conduct interviews with older people as well. For public use, audio copies of narrations, folktales, epics, and so on may be made.
b. “Not everyone is capable of fulfilling the roles of the elders.” Explain this statement with reference to the essay.
Ans :In modern society, elders play a vital function and have made significant contributions to the preservation and promotion of our cultural identity and history. But not everyone is suited for the job. This is because elders are considered to be more credible than any other age group in society and they have experienced the most then anybody else. A huge number of people in the community are impacted by their cultural and traditional values, such as religion, rituals and art.
c. What is the controlling idea or thesis of this essay?
Ans : The controlling idea or thesis of the essay is that oral tradition is extremely essential in helping preserve the ideals of culture. It helps individuals make sense of the world and is used to educate children and adults about key elements of their culture. The greatest method to preserve the oral tradition is to listen to elders, since oral tradition is the message that is passed verbally from one generation to another,
d. How do topic sentences guide the reader through the essay? What would be lost without them?
Ans :The essay's thesis is discussed in detail throughout the body of the essay in topic sentences. If an essay doesn't include subject sentences, it becomes disjointed and the writer is unable to communicate his or her primary point to the reader. They direct the readers by pointing out the topic of the paragraph. Rest of paragraphs' sentences should connect to the subject sentences in one way or another.
e. What are the four major problems developed by LaPena with regard to maintaining the oral tradition. How are they used to structure the essay?
Ans : In order to preserve the oral tradition, LaPena identified four key issues which are as follow:
-It is more difficult to validate oral tradition because of the possibility of modifications.
-The older roles are not for everyone.
-There is a widening generational divide as a result of new technological advancements.
-Modern society isn't interested in learning about oral heritage.
Visit: www.tsz.com.np for more!
Wait for some seconds to generate PDF download link!
Download PDF as HTML
Please wait..
If the download didn't start automatically, click here.