How to Live Before You die? Exercise Class 11 English with Summary (Steve Jobs)

How to Live Before You die? Exercise and Summary Class 11 English 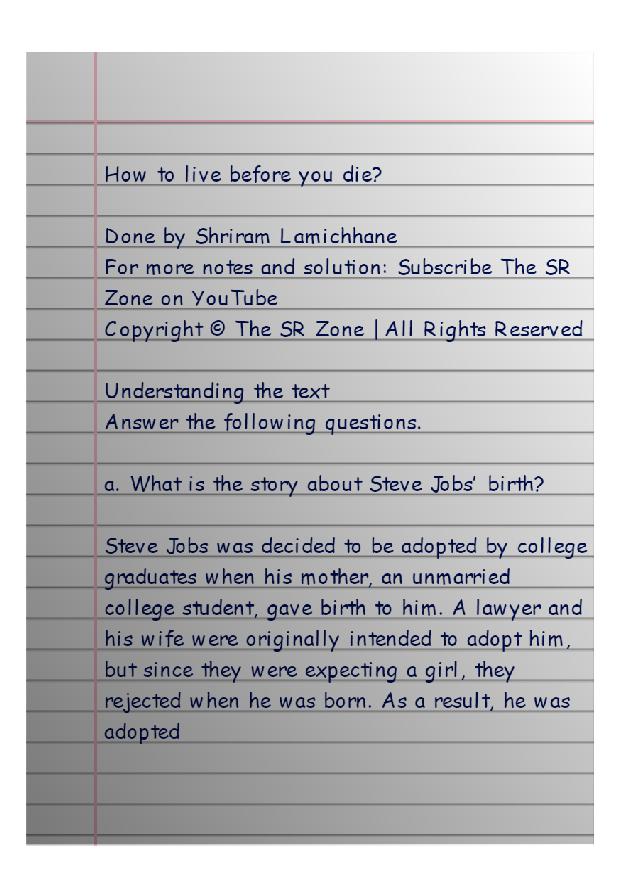 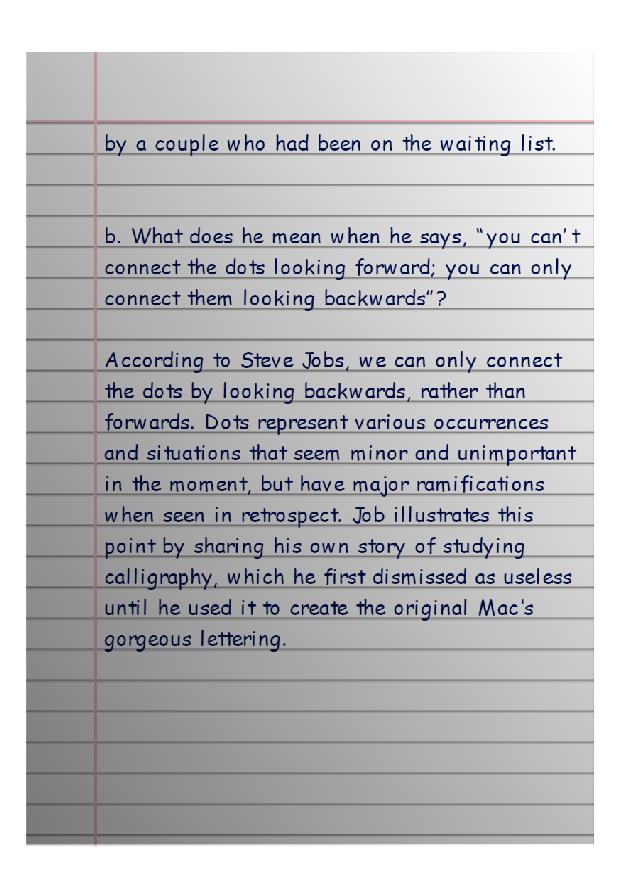 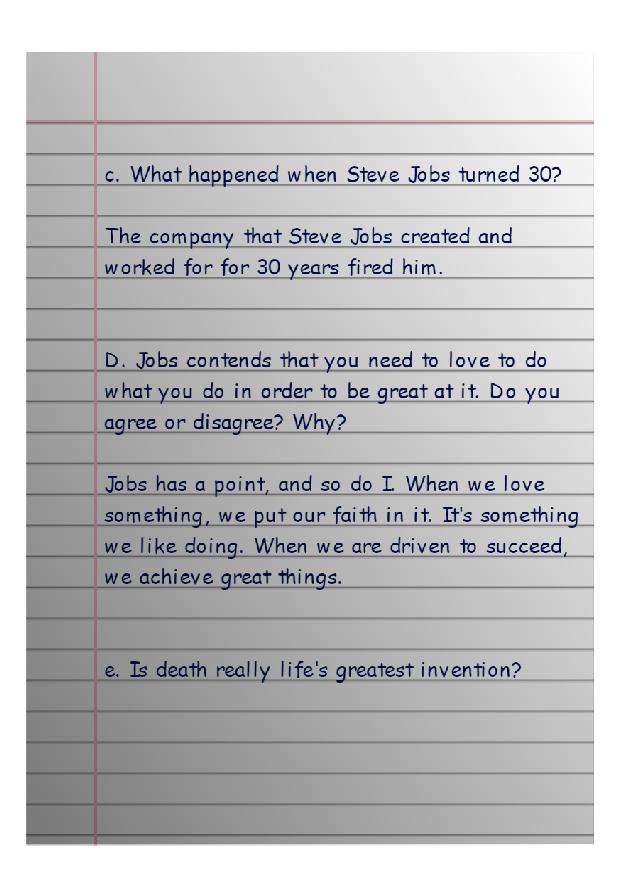 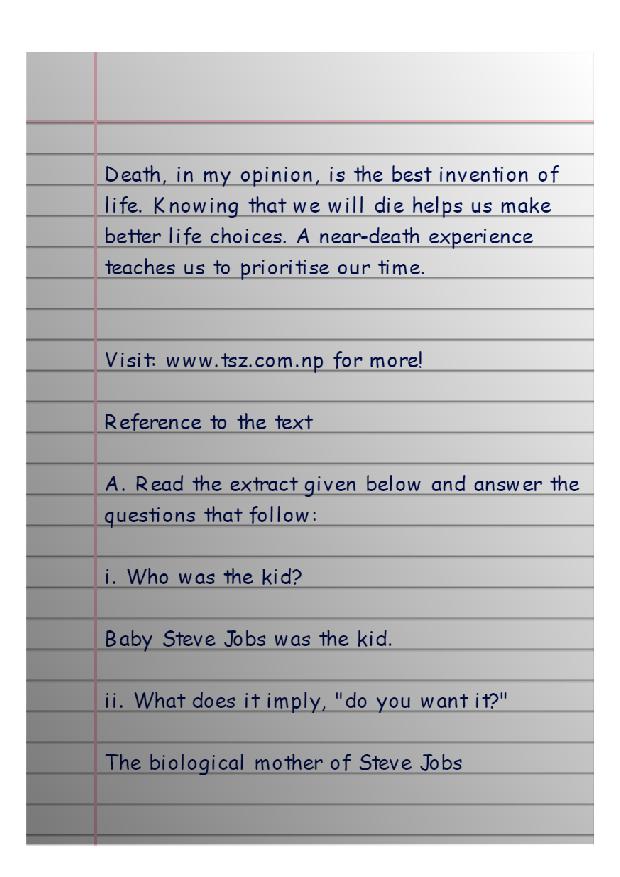 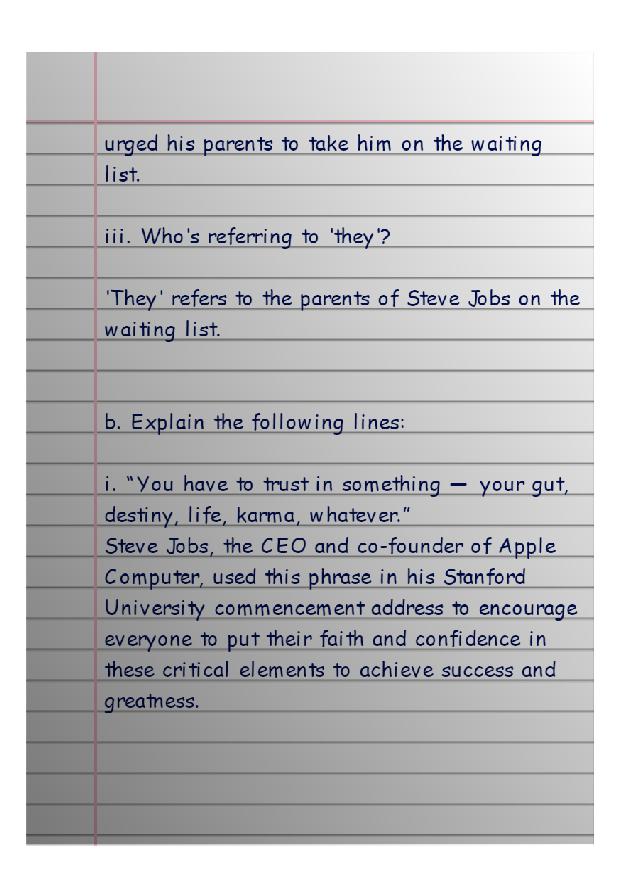 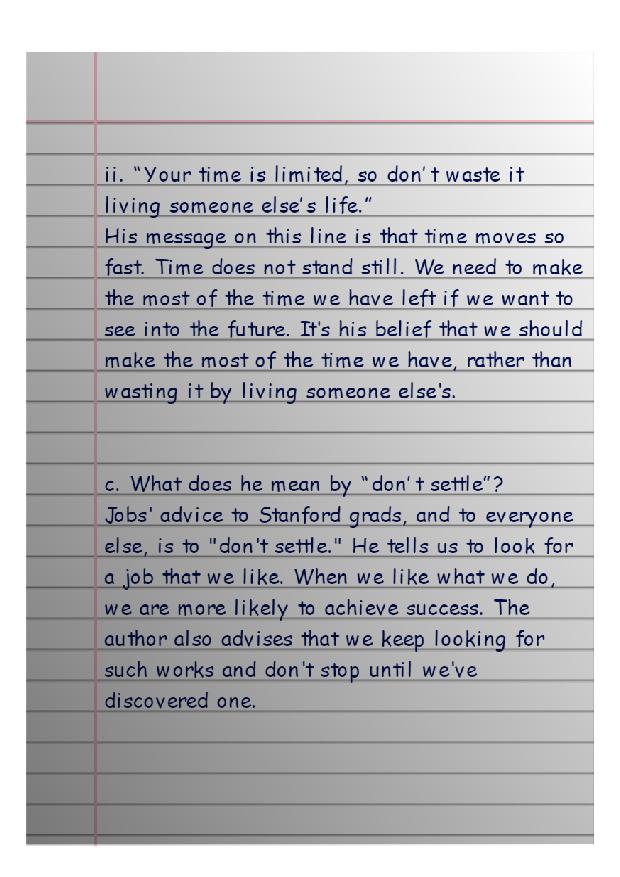 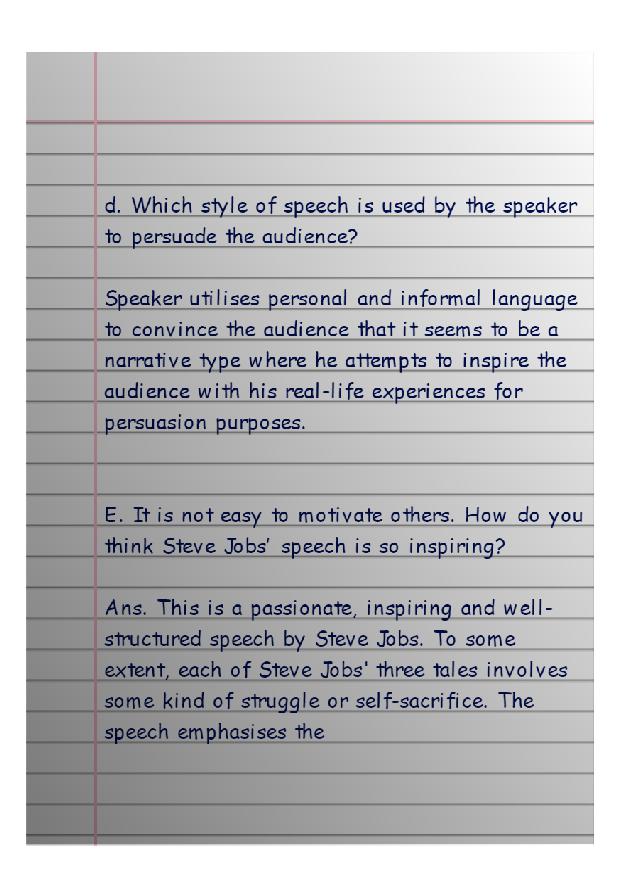 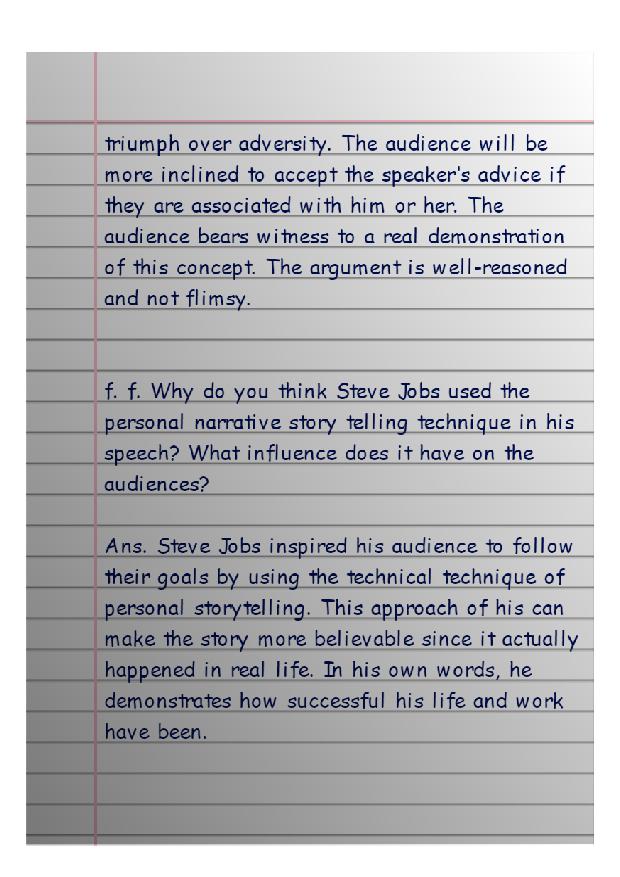 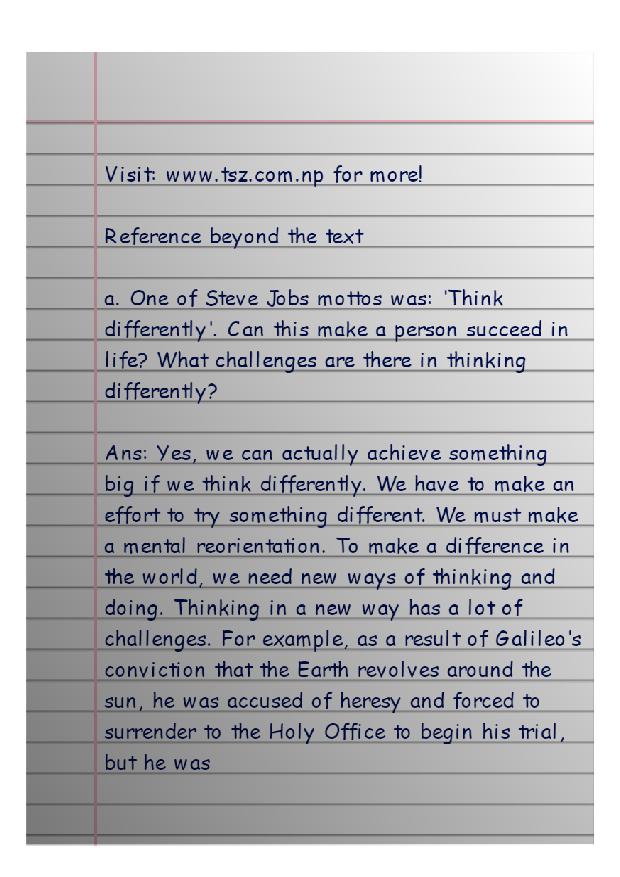 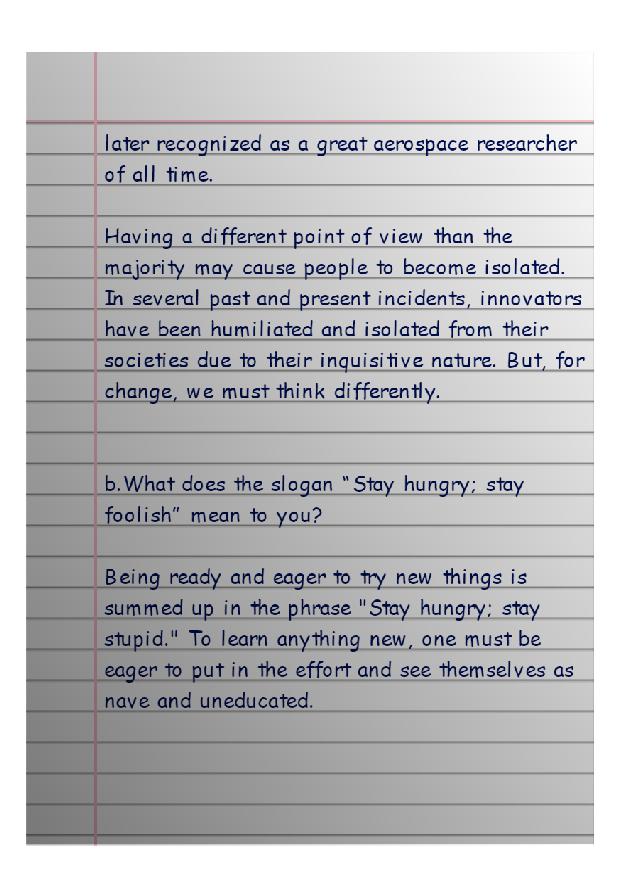 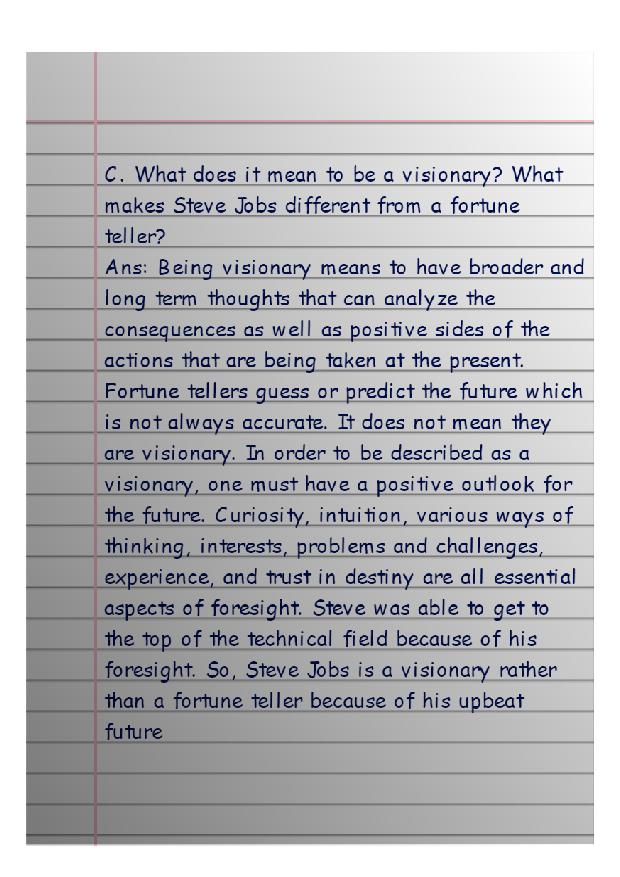 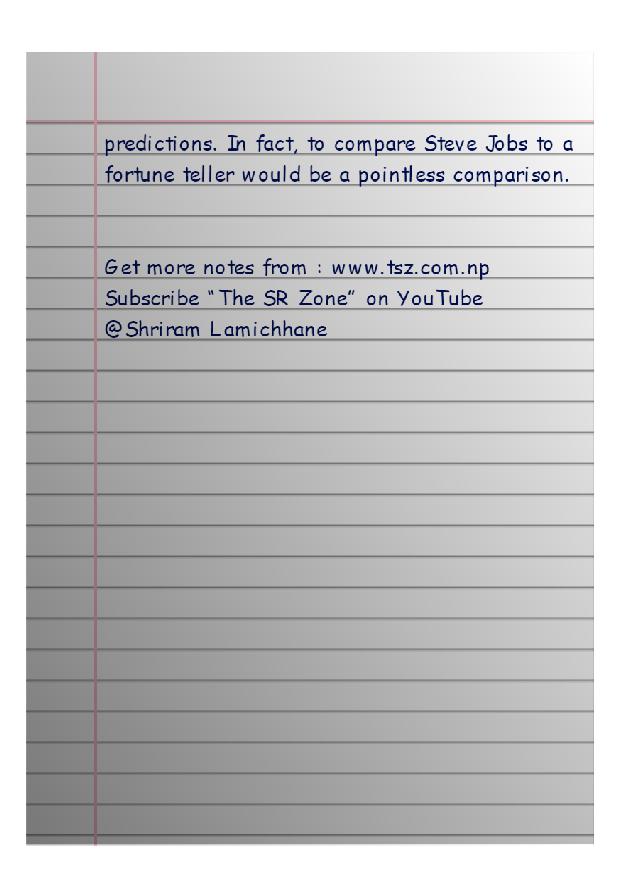 Go to What I require from Life? Exercise : Questions Answers and Summary Class 11

'How to Live Before You Die,' a motivational speech given by Apple Computer and Pixar co-founder and CEO Steve Jobs tells three events from his life that have had a significant impact on his professional experiences and journey.

Steve Jobs' speech begins with the story of connecting the dots. Connecting the dots refers to making connections between different aspects of life in order to better understand them. He speaks about the account of his birth, adoption, and the subsequent struggle as a young man to find purpose in his life. All he points from this story is that we should care even for the smallest things in life because those small things actually determine who we are or who we will be in future.

Steve at 17 enrolled at a prestigious private university called Reed College, but he left after a year because he was interested in taking Calligraphy lessons. So he enrolled in Reed College's Calligraphy programme, but ten years later, he utilised his calligraphy skills to create the first computer with elegant lettering, which he named Macintosh computer. The notion that various dots continued joining and supporting him to achieve his true goal came from looking back. Dropping out of college, beginning a career in his field of interest, and dealing with adversity and faith in Karma were all decisions that he took along the way that led to his success.

In this section, Steve Jobs describes his feelings about his love and loss of business. As a result of his early success, Steve and his pal Woz founded Apple corporation with long hours of effort and after some time, the tiny business had grown to a 2 billion dollar enterprise with 4000 workers. But, people in authority dismissed him from his own business. Later, he founded NeXT and then Pixar to develop computers with animated features. Later, Apple purchased the NeXT Corporation. He went back to work for the Apple Corporation and combined his previous ideas with his new ones. These events changed his outlook on life and enabled him to dominate the IT industry with his new perspective. As a result, he now wants to spread the message not to lose hope, love your job, and keep searching for employment that you like.

The third and last story deals with passing away. He advises us to live each day as if it were our last. He has described the fear of demise as the biggest motivation for him to do the things in hurry and prioritize the most important things. He has pancreatic cancer, doctor has fixed the date of his death but he has never given up on life. He was able to get the cancer surgically removed. He argues that we have a finite amount of time and should thus not squander it. We should make use of it as soon as possible before we pass away.

How to live before you die Questions Answers:

a. What is the story about Steve Jobs’ birth?
Steve Jobs was decided to be adopted by college graduates when his mother, an unmarried college student, gave birth to him. A lawyer and his wife were originally intended to adopt him, but since they were expecting a girl, they rejected when he was born. As a result, he was adopted by a couple who had been on the waiting list.
b. What does he mean when he says, “you can’t connect the dots looking forward; you can only connect them looking backwards”?
According to Steve Jobs, we can only connect the dots by looking backwards, rather than forwards. Dots represent various occurrences and situations that seem minor and unimportant in the moment, but have major ramifications when seen in retrospect. Job illustrates this point by sharing his own story of studying calligraphy, which he first dismissed as useless until he used it to create the original Mac's gorgeous lettering.
c. What happened when Steve Jobs turned 30?
The company that Steve Jobs created and worked for for 30 years fired him.
D. Jobs contends that you need to love to do what you do in order to be great at it. Do you agree or disagree? Why?
Jobs has a point, and so do I. When we love something, we put our faith in it. It's something we like doing. When we are driven to succeed, we achieve great things.
e. Is death really life's greatest invention?
Death, in my opinion, is the best invention of life. Knowing that we will die helps us make better life choices. A near-death experience teaches us to prioritise our time.