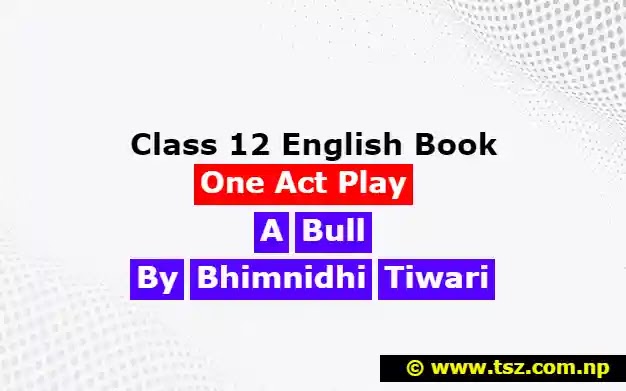 a. Why have Gore and Jitman come to see Laxminarayan?

King Ranabahadur Shah's bull (Male) has died, and the cowherds Gore and Jitman have come to tell Laxminarayan about it.

b. What, according to cowherds, is the reason behind the death of Male?

Cowherds believed that Male died because he was starving and unable to digest fine rice and split gram, the basic foods.

d. Why does Laxminarayan run ahead of the convoy at Thulo Gaucharan?

Ahead of the convoy at Thulo Gaucharan, Laxminarayan rushes to give the cowherds instructions to massage the bull's rear feet and wave fans at it in order to impress King Ranabahadur Shah. He would get furious and punish them otherwise. He wants to show the king how much they care about the bull.

e. Why do Gore and Jitman cry when the king declares that Male is dead?

To demonstrate their supposed affection and concern for the bull, Gore and Jitman weep as the king announces the Male dead. Immediately, they both begin pleading with the king for his forgiveness. They hope to escape the anger of the king by their efforts. He could punish them and punish them for his bull's death otherwise.

f. How do we learn that the bull is dead?

g. How does the play make a satire on the feudal system?

The drama depicts the dehumanisation and oppression of feudal rulers on their workers. Common people live in terror because the lord's animal is treated better than they. The feudal system has suppressed, dominated, and dehumanised them. We have seen the cowherds who survive on the Lord's kindness and grace. This drama depicted the feudal society and its abuse of common people.

The monarchy system was in place in Nepal in the 1800s. The Shah Dynasty governed Nepal at the time. This nation has a lot of set rules. People were deprived of their freedom. The king and his soldiers had to be obeyed at all costs.

The rulers and lords in "The Bull'' represented a cruel society. People's circumstances weren't really good. Politics was little understood by the citizenry. People were punished for not performing swosthi for the kings and lords (bow down to them). They would be punished if they revolted against their rulers. Their rulers abused them. People had no fundamental rights. Females were obliged to live under the dominance of men. Males used to have many wives. The monarchs or lords had total influence over the commoners' lives.

b. What does the relation between Laxminarayan and his wives tell us about the society of that time? To what extent has the Nepali society changed since then?

Ranabahadur Shah's bull doctor and bichari (legal officer) Laxminarayan is a forty-year-old guy. Throughout his life, he has been married to seven women. Even with seven women in the house, he still doesn't look happy. He's still thinking about getting married to someone else.

At home, he refers to his seven wives as "flat-nosed," "pretty," "butterfly," "swallow," "ugly face," and other insulting terms. Using various nicknames for each of his wives, he demonstrates patriarchal dominance as well as the plight of women in the culture at the time.

It shows a society where men were seen as superior creatures and women as inferior, gender roles were rigidly enforced. The married women were enslaved to their husbands for the rest of their lives. Illiteracy, child marriage, poverty, feudalism, and a general lack of education were the root causes of all of these problems. The practice of marrying many women was prevalent at the time. They were forced to rely on others and spent much of their time inside their homes.

Since then, Nepali society has seen significant transformations. The current state of affairs for Nepali women is significantly superior than expectations. Nepali women's awareness and literacy have risen exponentially. Women have occupied most of the top posts in Nepal. They earn the same as males. The Nepalese constitution ensures equal opportunity for men and women and punishes individuals who disrespect women. Society is not male-dominated. They no longer have to depend on men to survive.

c. Shed light on the practice of chakari as portrayed in the play. Have you noticed this practice in your society?

The notion of chakari appears often in "The Bull." Laxminarayn Dahal and two cowherds Gore and Jitman perform a lot of the king Ranabahadur Shah's chakari. They appear afraid of the king. Fear of the king's anger makes them polite.

Laxminarayan is a character who masters chakari. He has even been punished by the king for speaking loudly in front of the king. Both cowherds tell Laxminarayan after the bull dies. They all dread the king. The dead bull and both cowherds sleep on the cowshed. They act quite cautious around the bull. They massage the bull's feet and fan him to please the king. In front of the king, they call the bull "The Bull Sir." When the king proclaims the bull dead, both cowherds sob deeply. So the play is chakari-heavy.

Yes, I've seen this a lot in my culture. Everyone does chakari. But chakari is done in a different manner than the society of the time. People practice chakari of politicians a lot nowadays in Nepal for money, status, and wealth.

d. How does Laxminarayan outsmart Ranabahadur?

Laxminarayan rushes to the king's palace as soon as he learns of the bull's death. He excels at kingly flattery (chakari). He doesn't notify the king about the bull's death since the king could be enraged. He informs the king about the bull's illness instead of the actuality. He tells the cowherds to massage and fan the bull to please the king. The king believes the bull died despite excellent care and treatment. Because of Laxminarayan's techniques, the king doesn't question them, and they avoid punishment.

e. Sketch the character of Laxminarayan.

This one-act play's central character is Laxminarayan Dahal. He is a forty-year-old king Rana Bahadur Shah's bull doctor and a legal official. He has had seven wives. He has a total of seven spouses, yet he seems to be unhappy with all of them. He plans to wed the eighth of these women.

When he learns of the death of the king's bull, he employs his intellect to great effect, saving not only his own but also the lives of the cowherds. He is well-versed in the king's chakari (bullying).

They were spared the anger of the king thanks to his skillful tactics. To summarize, Laxminarayan has outwitted the king with his clever tactics and flattery.

a. Write an essay in about 300 words on “The Nepali Society: Past, Present and Future”.

The Nepali Society: Past, Present and Future

We use the term "society" to refer to a long-standing collection of people who share cultural features such as language, clothing, social standards, and creative forms. However, cultural practises are frequently blended and people from various cultures might be observed practising the customs of each other.

Nepali society has undergone significant transformations throughout the years.  Feudalism was pervasive throughout history. Women, as well as the general populace, had a difficult time in the past. They had to rely on kings or rulers to make a life. In terms of women's life during the period, things were quite difficult for them. For the majority of peasants, life was a struggle. It was so typical for children to marry one other. Society was extremely strict.

The destiny of others was formerly decided by feudalists or lords in most countries. People's lives were hampered by a shortage of resources. They had no understanding of the rights and possibilities that each person has in their own life. Because of patriarchal customs and ideals, women were confined to their own homes. At that time, patriarchal ideals and customs were at their zenith. Under the feudalists, the lives of the common people were dismal.

Nepalese societies now seem to be quite different from Nepalese communities of the past. The situation of Nepali women is much better than imagined at this point in time. People now have a wide range of liberties that cover a wide range of issues. Nepal's constitution has given women significant privileges throughout the years. Nepal is experiencing a wide range of developments in several industries. Nepali society has seen significant transformations in areas such as electricity, clean drinking water, improved roads and transportation, and improved educational opportunities. Nepalese society is now on the path to progress.

The political component of Nepali society has become a major part of this time which has the power to change the society.  We need to put politics aside and focus on the bright future of the Nepali people and the country as a whole. Nepal's future will be bright, I believe, provided we, as Nepalese people, pick the best candidates for our country's advancement.

b. In his “Satire 9”, Nicolas Boileau-Despréaux says:

But satire, ever moral, ever new

Delights the reader and instructs him, too.

She, if good sense, refine her sterling page,

Oft shakes some rooted folly of the age.

Do you agree with the poet? Discuss the lines with reference to Bhimnidhi Tiwari’s play “The Bull”.

A well-crafted piece of satire may both amuse and educate its audience, according to Nicolas's message in the preceding verse. To some extent, the errors and missteps of an era may be shattered if the satire is written with a good purpose in mind.

In that sense, I absolutely agree with the poet. Positive satire may help to ameliorate society's many bad aspects.

This play "The Bull" by Bhimnidhi Tiwari is a cutting satire on the feudal system that dehumanizes humans to the point that their life is dependent on respectful behaviour towards four-footed animals like bulls. Using humor, Tiwari provides his readers with a wide range of information on the society of the period, both good and bad.

Also Read : Summary of The Bull by Bhimnidhi Tiwari