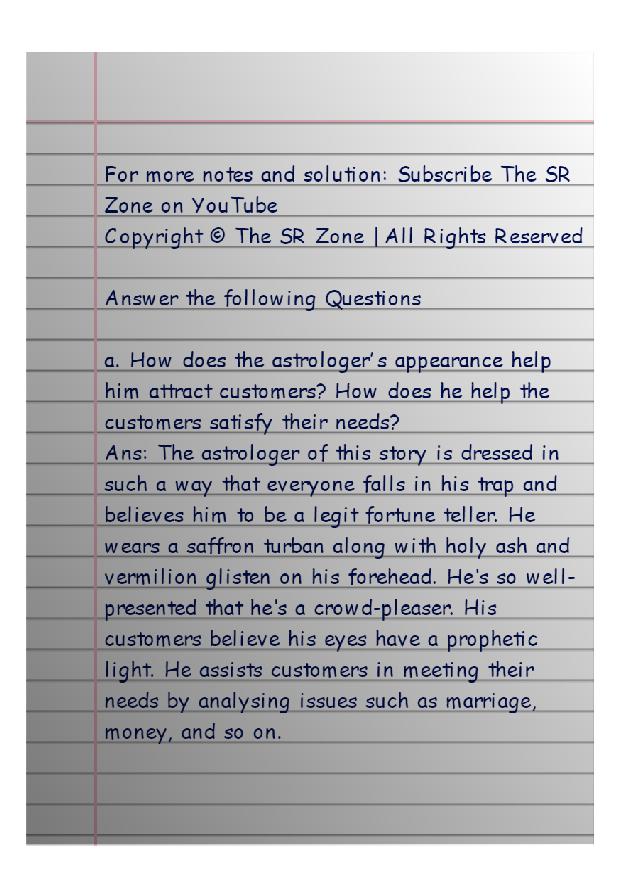 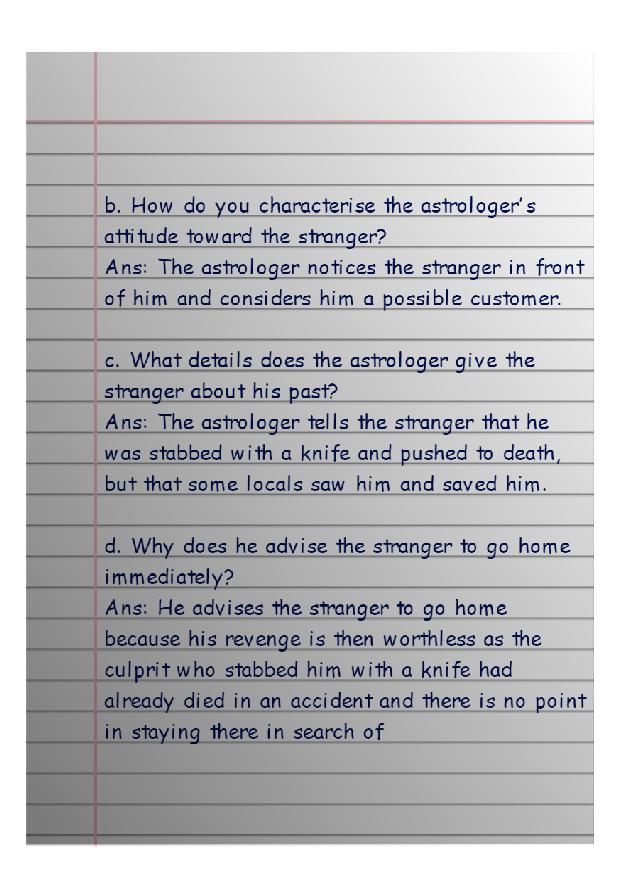 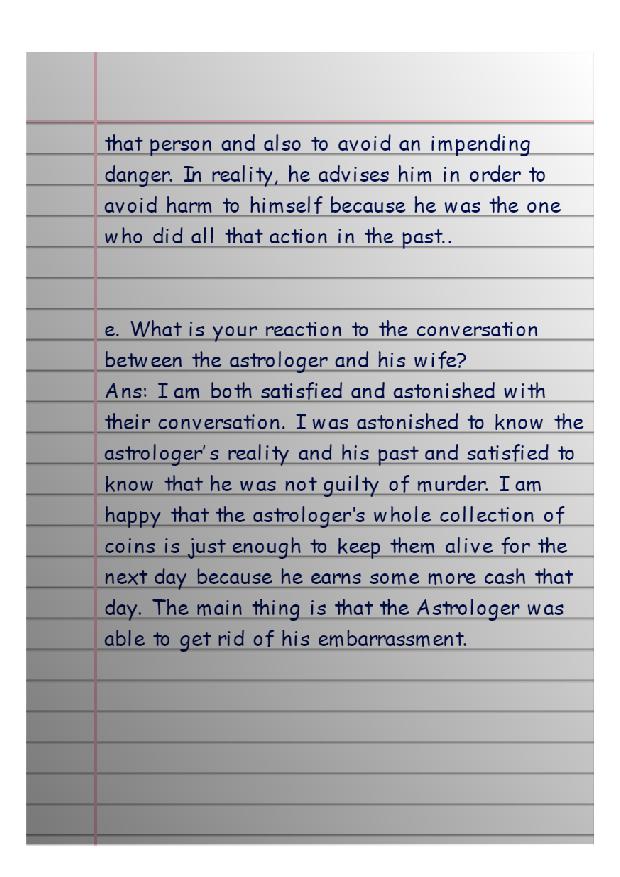 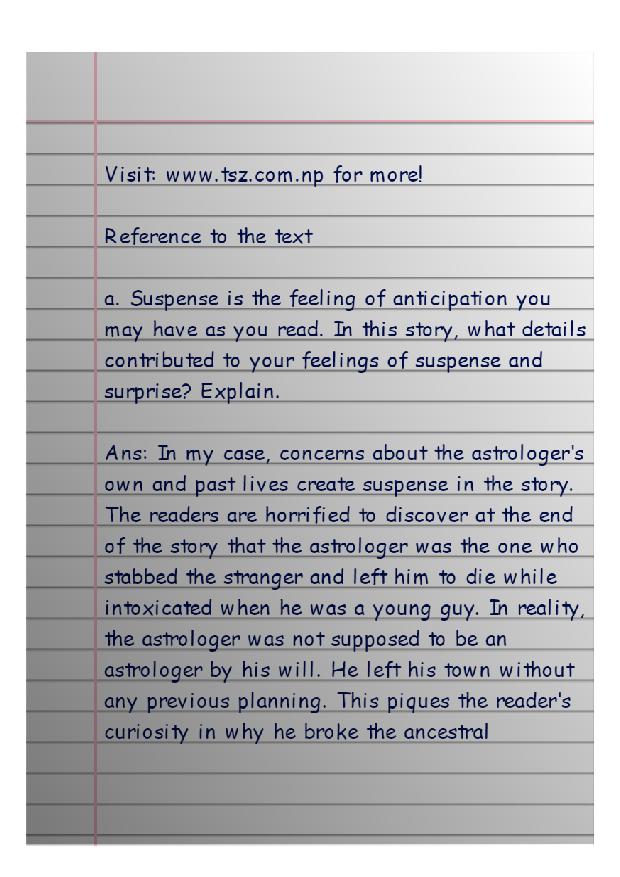 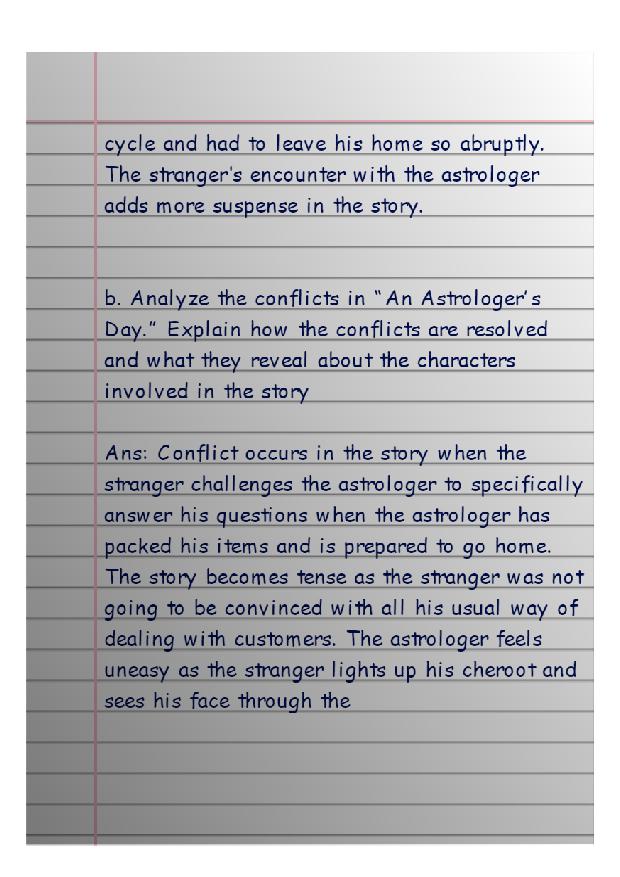 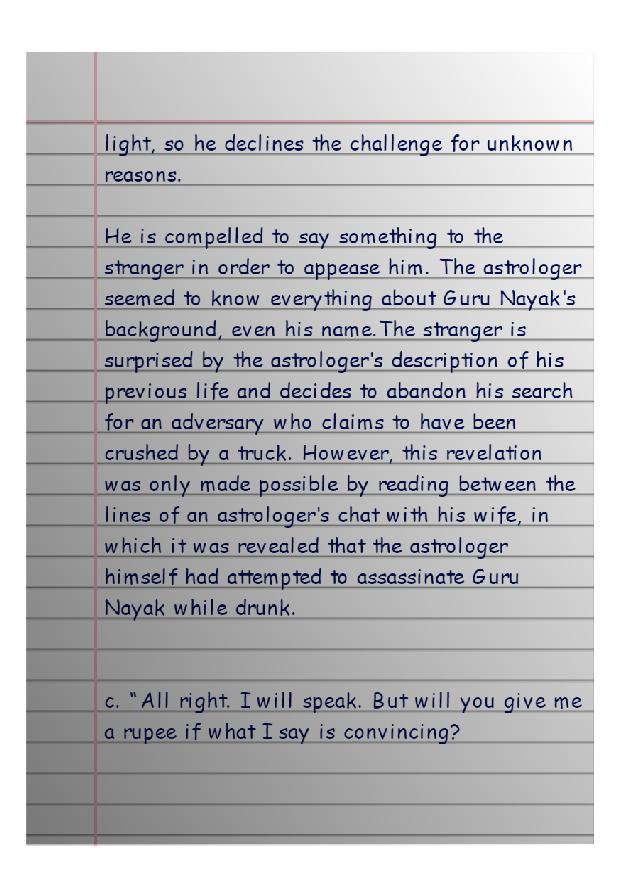 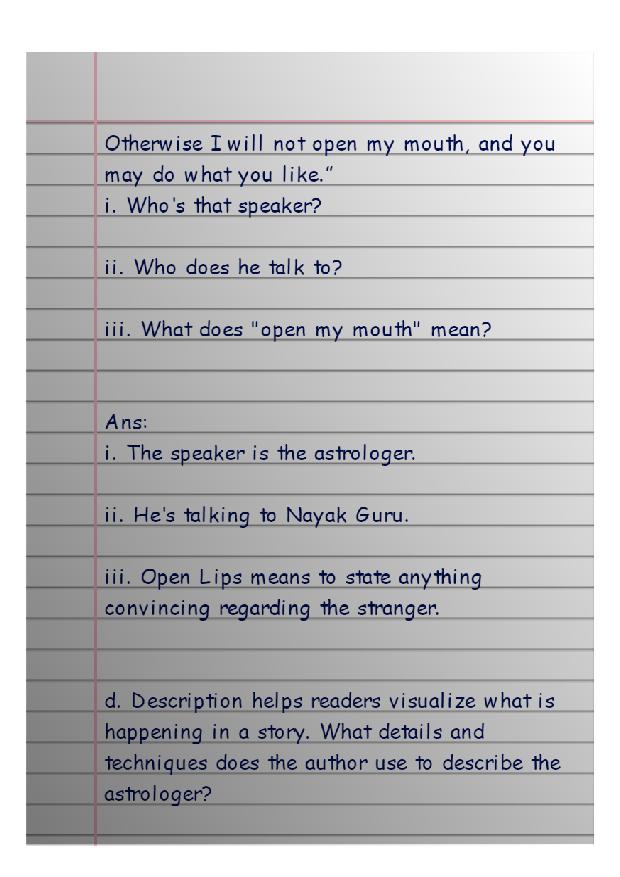 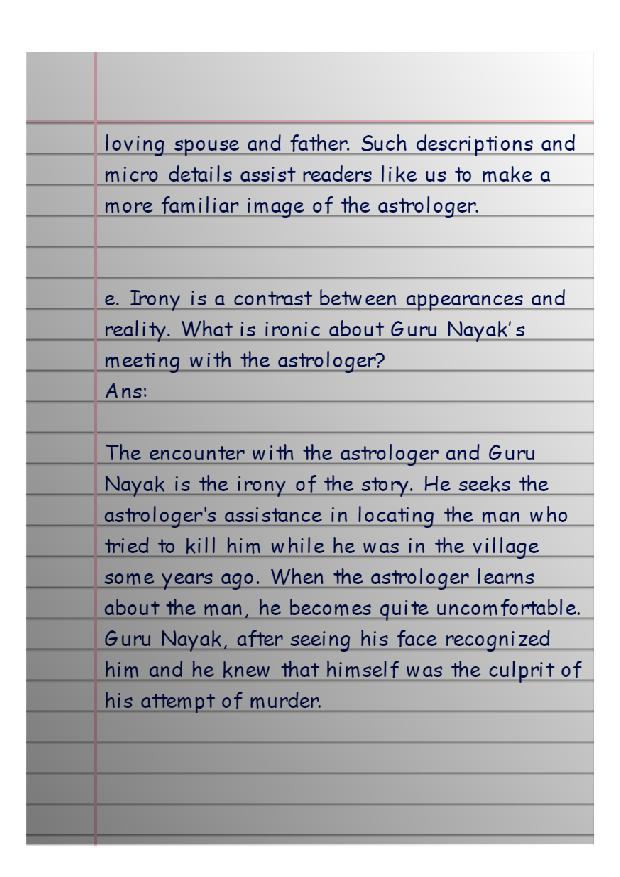 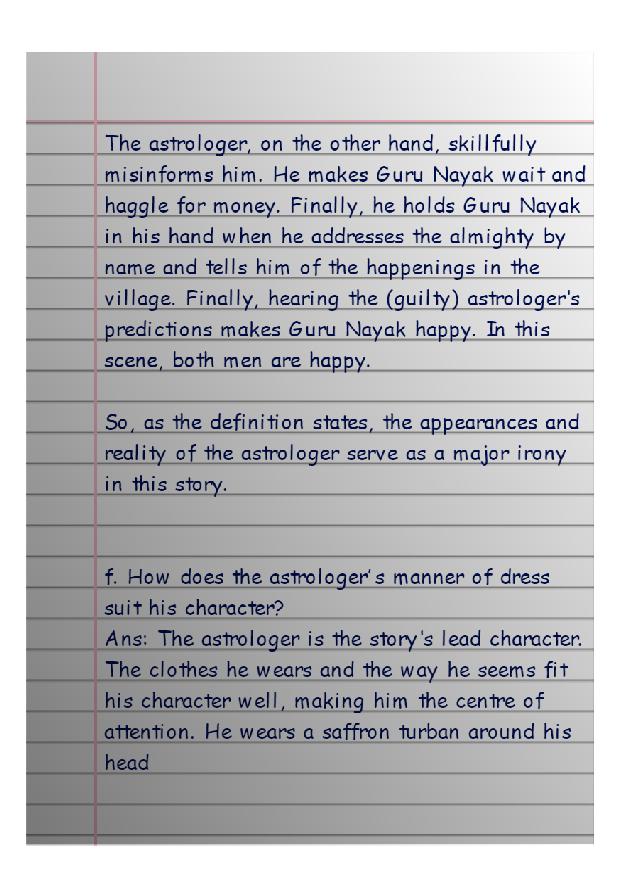 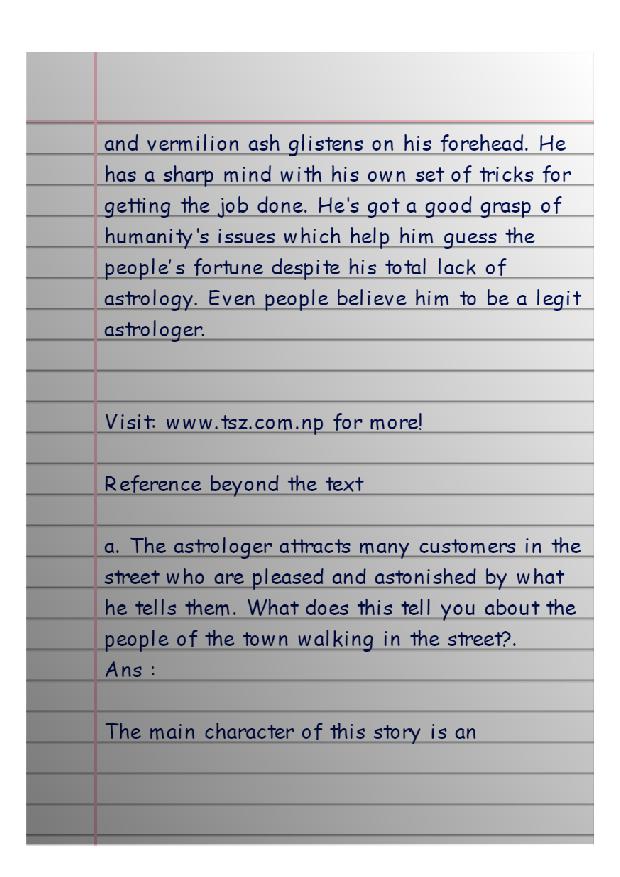 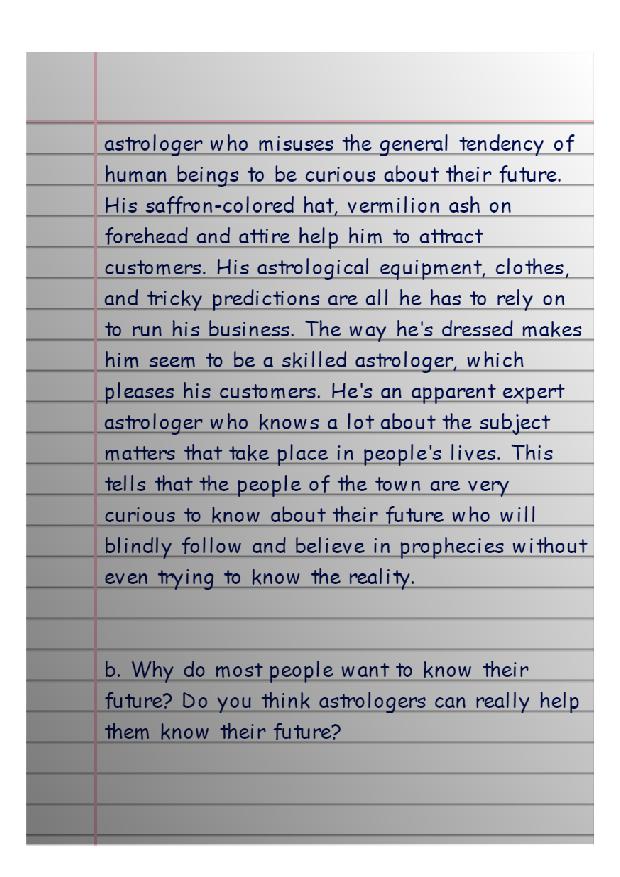 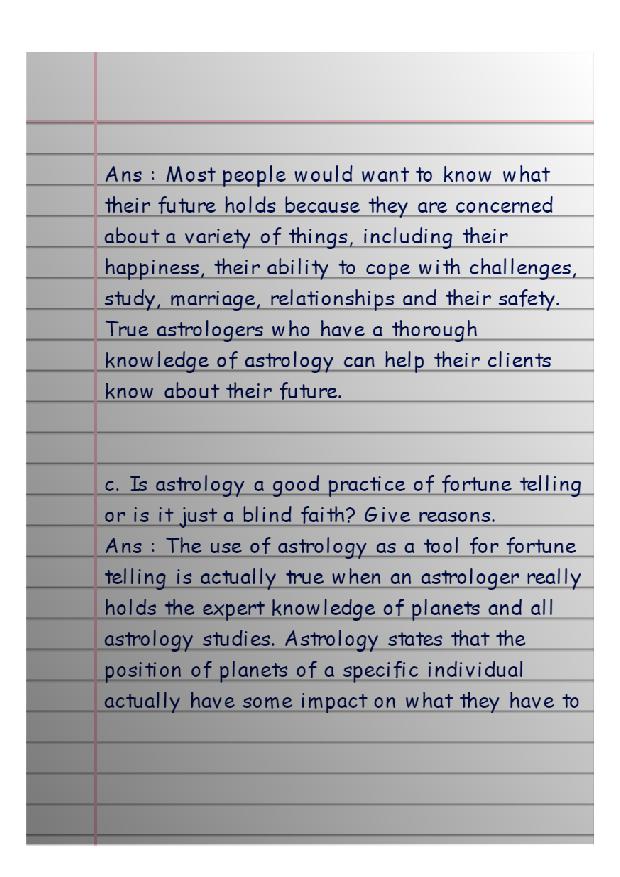 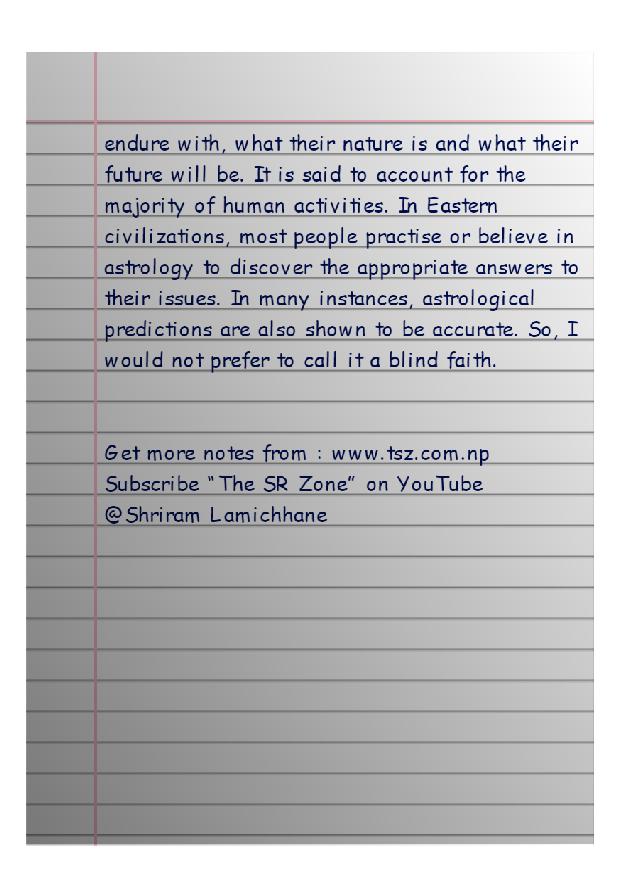 Go To Corona Says Exercise: Questions and Answers and Summary

An Astrologer's day is a mystery and satirical story written by R.K. Narayan. It is the story of a man who didn't know anything about astrology or reading palms. He was a criminal who was pretending to be an astrologer who left his village and went to a far town after stabbing and pushing a young man into a well. He pretended to be an astrologer to get away from the police and make a living.
The Astrologer used to sit beneath a large tree with his instruments of the profession, such as shells, calendars, and a journal. To demonstrate knowledge and spiritual power, he used to put on clothes to look like a holy man. He put holy ash and vermilion on his forehead and wore a turban that was the color of saffron. So, he pretended to be a great palm reader, even though he never wanted to be an astrologer. He became a palm reader by accident. He had no choice but to go into this line of work. The astrologer had established his shop in a crowded market amid vendors selling low-quality food.
The astrologer's spiritual quality was heightened by the marketplace's different store lights. He didn't have his own light, so he had to rely on the other sellers'. He had no desire to become an astrologer, but he was forced to leave his family home and go far away without a plan or money. He was, nevertheless, a believable holy man, offering imprecise but soothing guidance to people in the market based on his own insights into human issues. He was an expert in his field, and he always told people what they wanted to hear. He didn't know much about astrology, but he could make a decent living.
Guru Nayak showed up one day just as he was about to gather his goods and go. Neither of them could see much of the other's face in the dim light. The astrologer, seeing a chance for another customer, asked the visitor to sit and talk. The visitor agreed, but he was suspicious about the astrologer. He assured the astrologer that he couldn't provide him any useful or accurate information. The astrologer agreed after they haggled over the price (Guru Nayak would pay the astrologer eight annas if he was pleased and should refund the money twice if he wasn't).
The astrologer was terrified when Guru Nayak lit the cigarette and saw his face. He attempted to back out of the deal, but Guru Nayak wouldn't allow him. Guru Nayak learned that the astrologer had been stabbed in the chest and left for dead. Guru Nayak was shocked by the astrologer's recognition of his name. He inquired of the astrologer as to where he might locate the assassin. He was murdered by a vehicle some months ago, according to the astrologer. Guru Nayak was irritated by this, but he was pleased that the assassin had died horribly and so he handed over the money.
As he laid down to sleep at home, the astrologer told his wife about a time when he stabbed a guy and left him for dead, forcing him to abandon his home and start a new life as a fake astrologer. He had believed himself to be a murderer, yet the guy was still alive. Then he went to sleep with a smile on his face.

a. How does the astrologer’s appearance help him attract customers? How does he help the customers satisfy their needs?
Ans: The astrologer of this story is dressed in such a way that everyone falls in his trap and believes him to be a legit fortune teller. He wears a saffron turban along with holy ash and vermilion glisten on his forehead. He's so well-presented that he's a crowd-pleaser. His customers believe his eyes have a prophetic light. He assists customers in meeting their needs by analysing issues such as marriage, money, and so on.
b. How do you characterise the astrologer’s attitude toward the stranger?
Ans: The astrologer notices the stranger in front of him and considers him a possible customer.
c. What details does the astrologer give the stranger about his past?
Ans: The astrologer tells the stranger that he was stabbed with a knife and pushed to death, but that some locals saw him and saved him.
d. Why does he advise the stranger to go home immediately?
Ans: He advises the stranger to go home because his revenge is then worthless as the culprit who stabbed him with a knife had already died in an accident and there is no point in staying there in search of that person and also to avoid an impending danger. In reality, he advises him in order to avoid harm to himself because he was the one who did all that action in the past..
e. What is your reaction to the conversation between the astrologer and his wife?
Ans: I am both satisfied and astonished with their conversation. I was astonished to know the astrologer’s reality and his past and satisfied to know that he was not guilty of murder. I am happy that the astrologer's whole collection of coins is just enough to keep them alive for the next day because he earns some more cash that day. The main thing is that the Astrologer was able to get rid of his embarrassment.