What is Poverty? Exercise and Summary Class 11 English 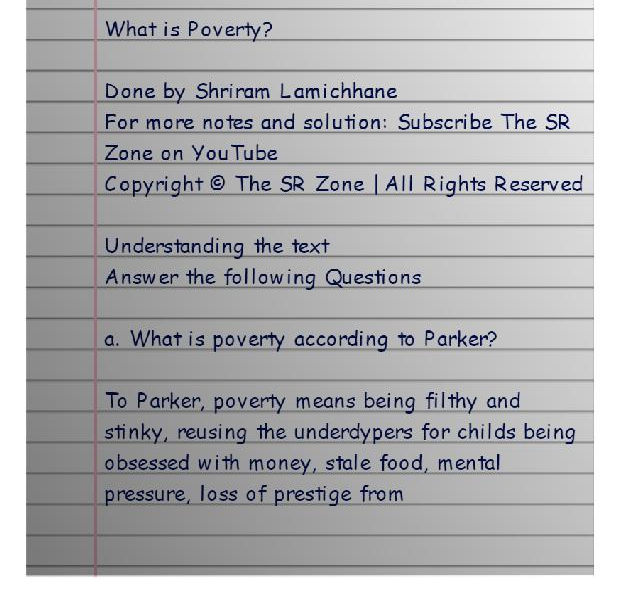 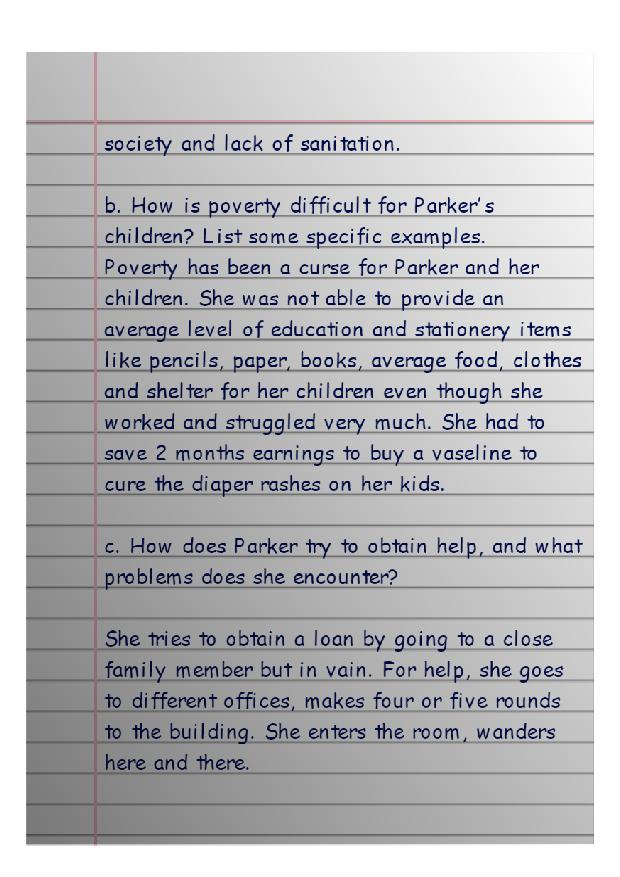 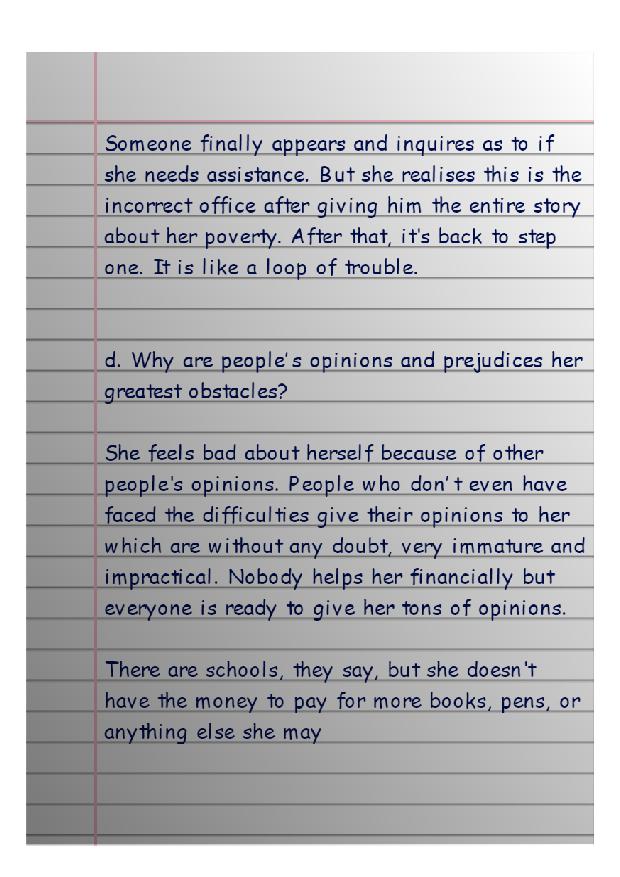 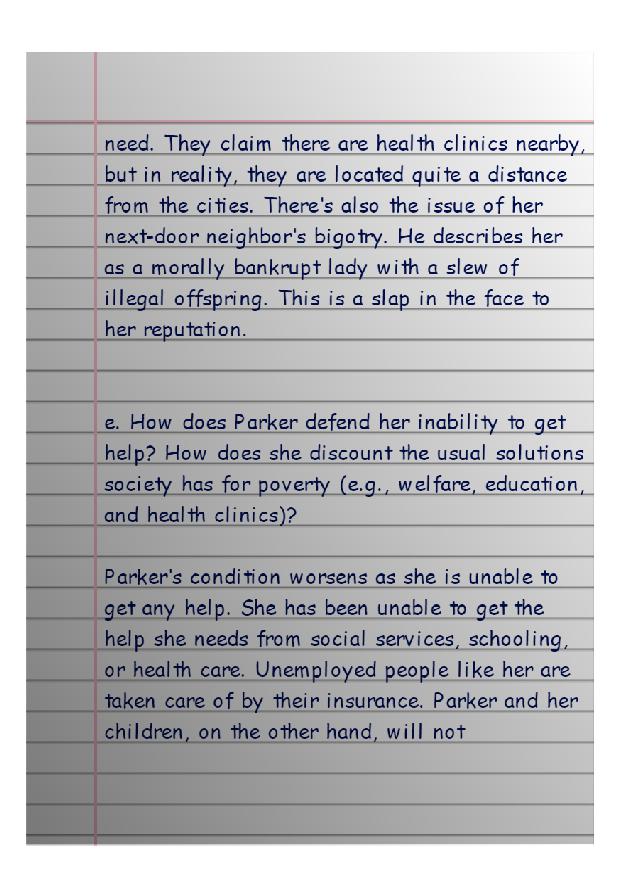 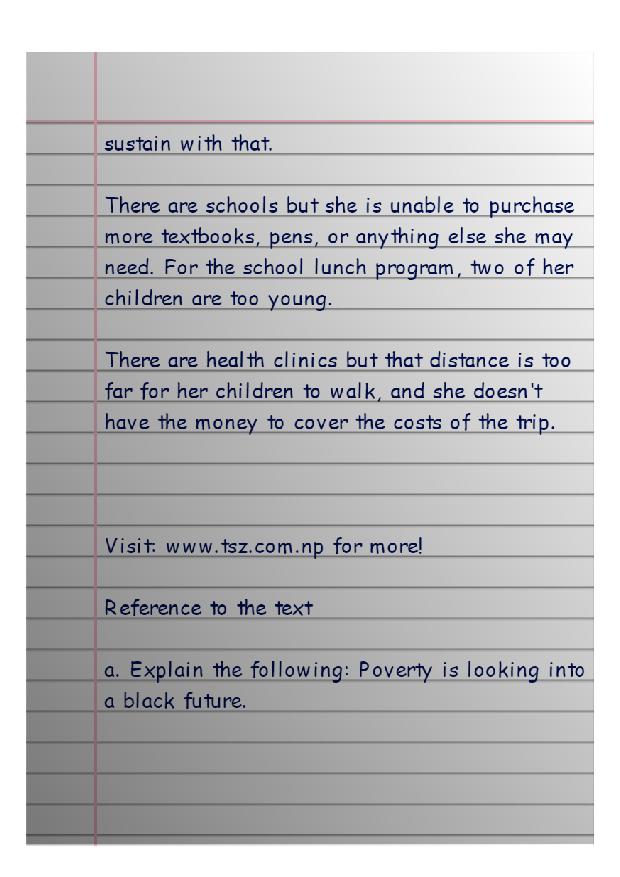 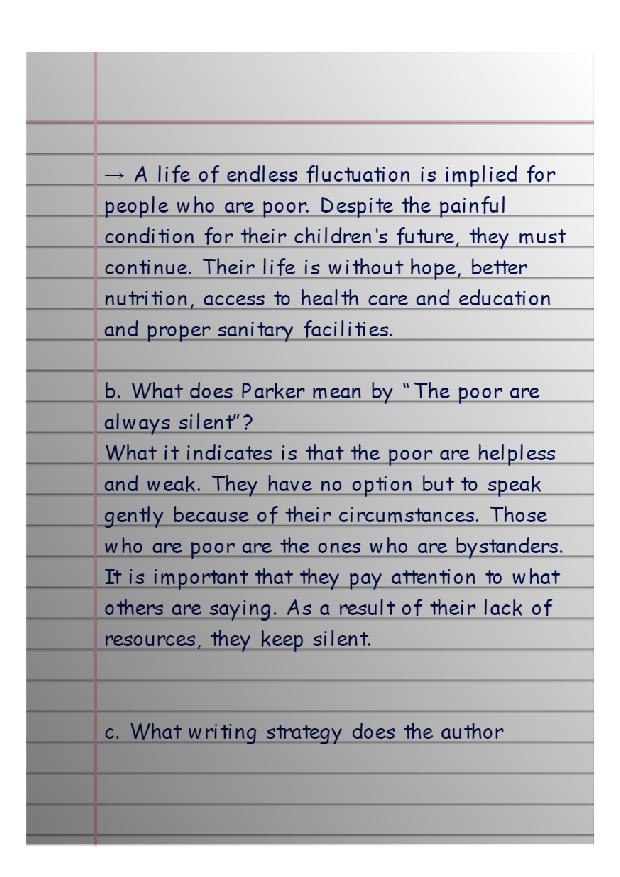 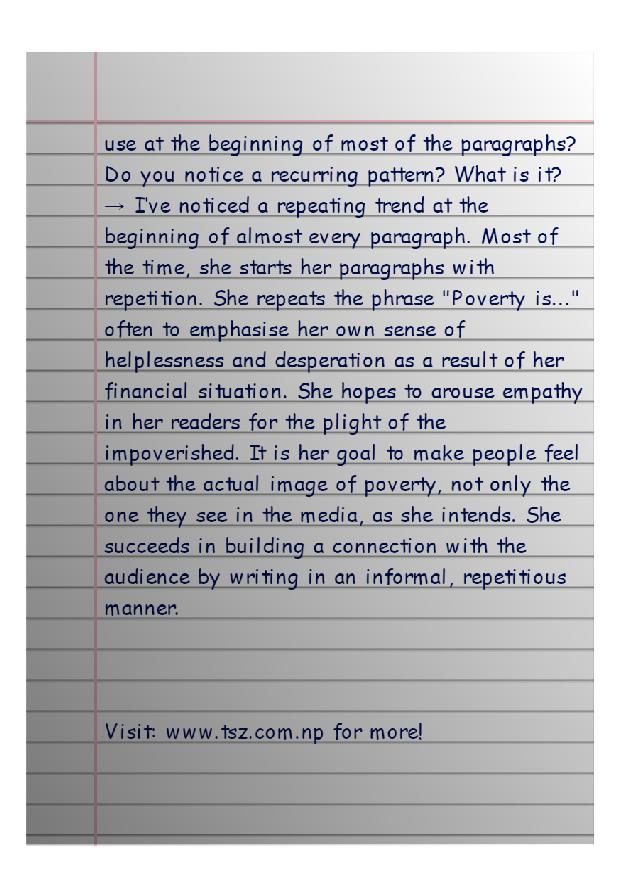 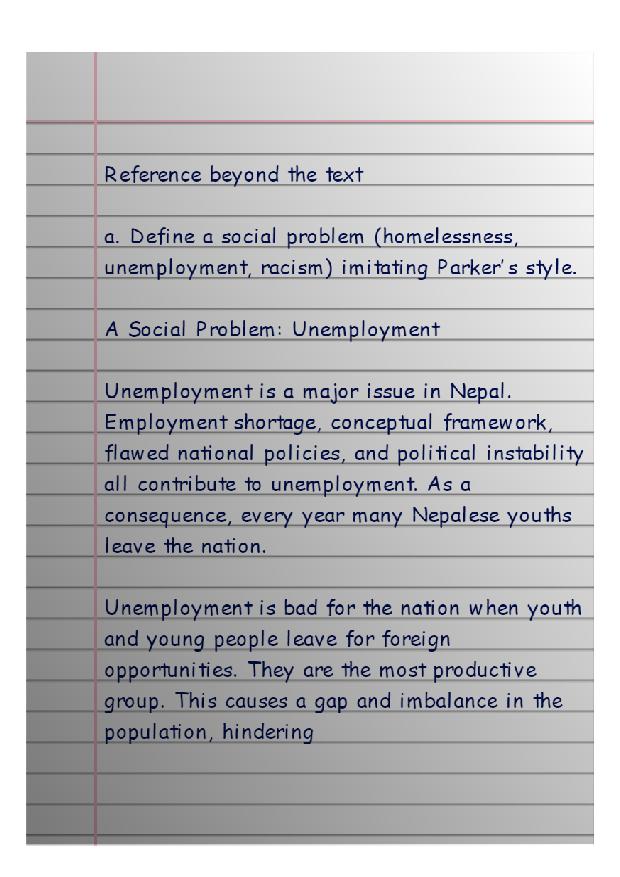 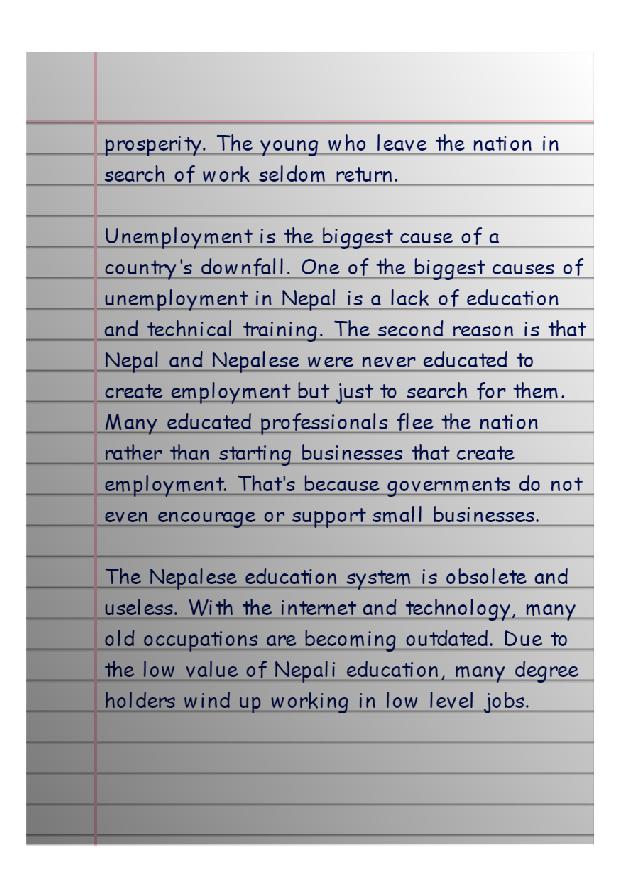 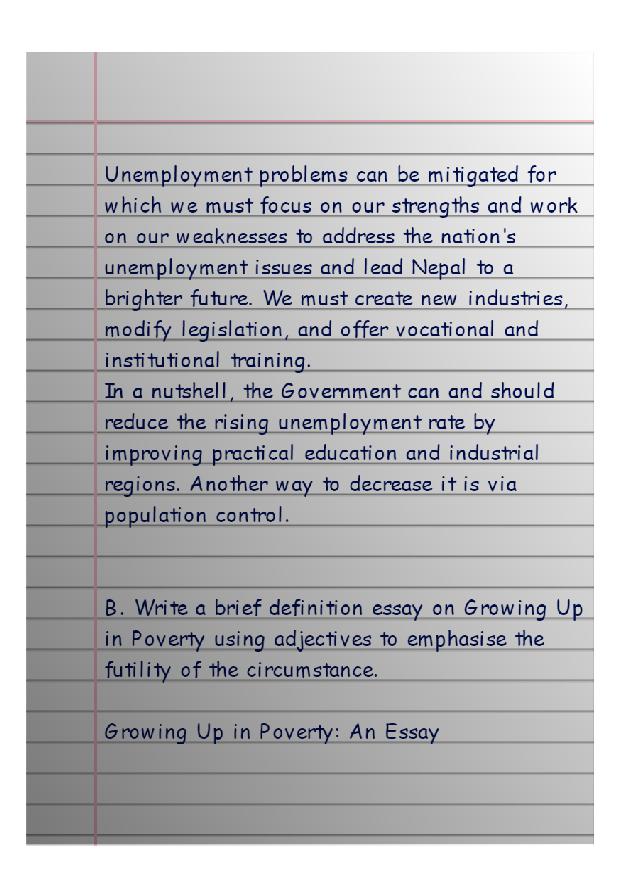 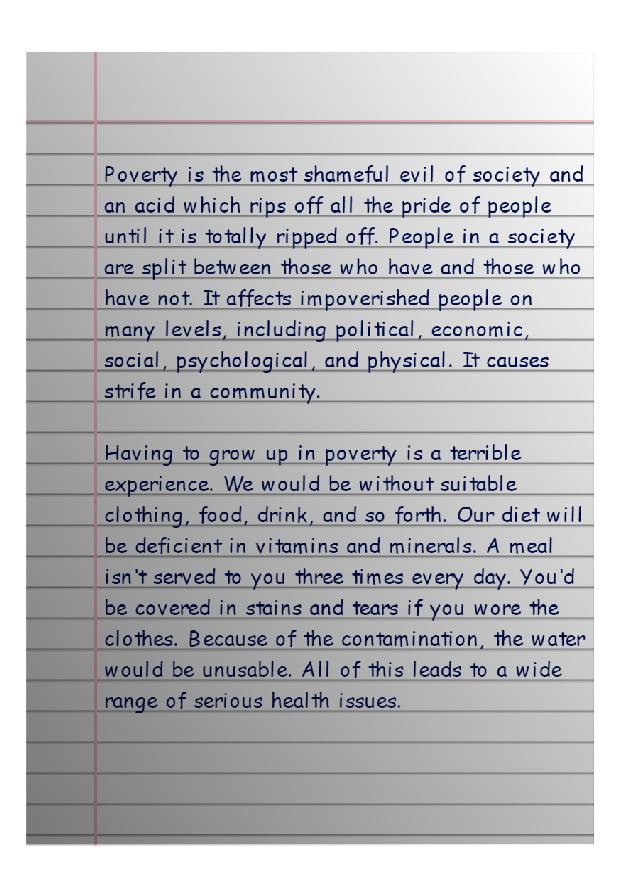 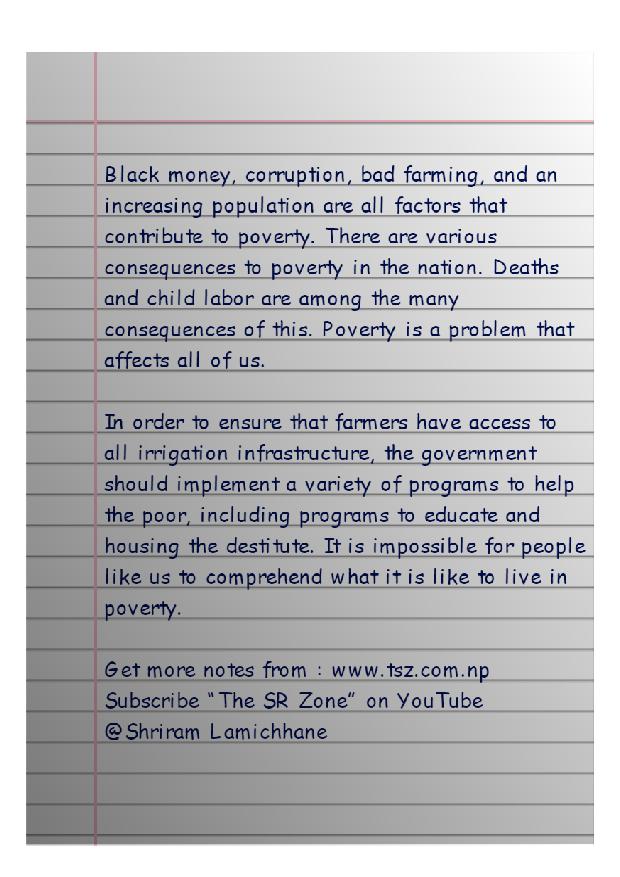 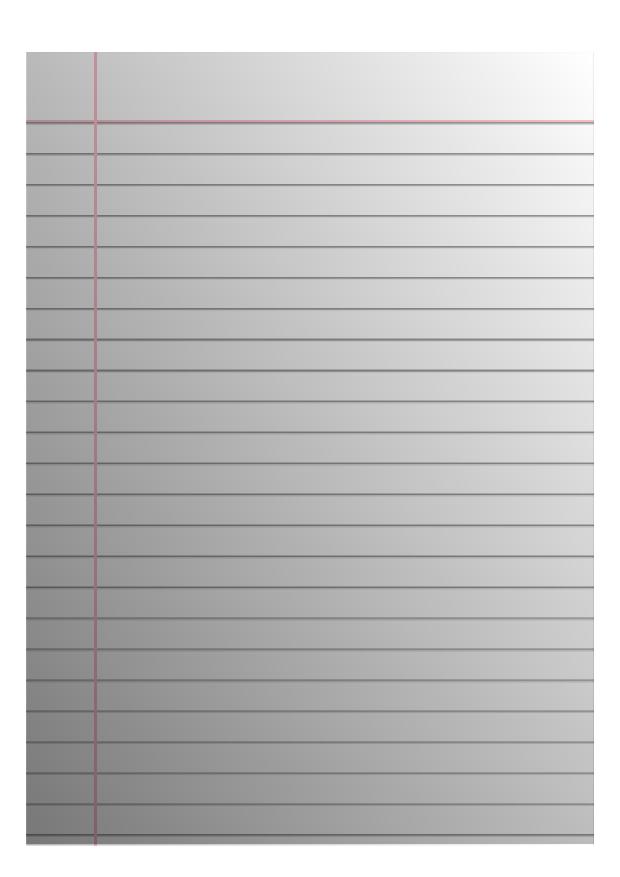 What is Poverty by Jo Goodwin Parker Summary

In the essay entitled ‘What is Poverty’?,  author Jo Goodwin Parker has discussed her own experience with rural poverty. She tries to give the real and experienced definition of poverty throught this essay citing real life examples.

She describes her upbringing in poverty and the everyday difficulties she faces. Poverty, in her opinion, has many guises. Poverty is the inability to afford clean water, nutritious food, medical treatment, or appropriate sanitation, as well as an adequate standard of life. Because it's so destructive to pride, dignity, health, and future, it's like a poisonous acid.

She dropped out of school and married young because of her family's financial situation.

She and her husband broke up due to some reasons.Because of her plight, even her spouse turned against her. She could not avoid pregnancy because birth control was too costly for her. Her financial situation prevented her from prioritising health. Because of her three children, she felt guilt and embarrassment if she didn't seek assistance to conquer this issue.

She states that she does not have enough money to buy clothes for her child and she even wears filthy and dirty clothes. Her job pays less than the minimum she needs to cover her child care costs as well. Without butter or oil, she serves cornmeal for breakfast to her children. When she ran out of baby diapers to purchase, she didn't even have enough money to buy skin care creams to care for the rashes.

She opined that today's world is a world of self-centeredness since despite her best efforts, she received no assistance when she extended her hands to everyone. When it comes to poverty, Parker doesn't seek pity; instead, she seeks to educate her readers the real meaning of poverty.

She was unable to get any assistance or support from government organisations or any other relatives. She claims to have no pleasures in her life as a result of the high expense of necessities. According to Parker, living in poverty is comparable to staring into the black future.

She eventually comes to the conclusion that poverty is comparable to an acid that slowly eats away at our pride until it is completely gone. Not being able to afford schooling and other necessities is a sign of poverty. Overall, she says that poverty is a lack of the necessities of life, living in filth, being exhausted, and desiring assistance, as well as being shameful.

What is Poverty Questions Answers

a. What is poverty according to Parker?
To Parker, poverty means being filthy and stinky, reusing the underdypers for childs being obsessed with money, stale food, mental pressure, loss of prestige from society and lack of sanitation.
b. How is poverty difficult for Parker’s children? List some specific examples.
Poverty has been a curse for Parker and her children. She was not able to provide an average level of education and stationery items like pencils, paper, books, average food, clothes and shelter for her children even though she worked and struggled very much. She had to save 2 months earnings to buy a vaseline to cure the diaper rashes on her kids.
c. How does Parker try to obtain help, and what problems does she encounter?
She tries to obtain a loan by going to a close family member but in vain. For help, she goes to different offices, makes four or five rounds to the building. She enters the room, wanders here and there. Someone finally appears and inquires as to if she needs assistance. But she realises this is the incorrect office after giving him the entire story about her poverty. After that, it's back to step one. It is like a loop of trouble.
d. Why are people’s opinions and prejudices her greatest obstacles?
She feels bad about herself because of other people's opinions. People who don’t even have faced the difficulties give their opinions to her which are without any doubt, very immature and impractical. Nobody helps her financially but everyone is ready to give her tons of opinions.
There are schools, they say, but she doesn't have the money to pay for more books, pens, or anything else she may need. They claim there are health clinics nearby, but in reality, they are located quite a distance from the cities. There's also the issue of her next-door neighbor's bigotry. He describes her as a morally bankrupt lady with a slew of illegal offspring. This is a slap in the face to her reputation.
e. How does Parker defend her inability to get help? How does she discount the usual solutions society has for poverty (e.g., welfare, education, and health clinics)?
Parker's condition worsens as she is unable to get any help. She has been unable to get the help she needs from social services, schooling, or health care. Unemployed people like her are taken care of by their insurance. Parker and her children, on the other hand, will not sustain with that.
There are schools but she is unable to purchase more textbooks, pens, or anything else she may need. For the school lunch program, two of her children are too young.
There are health clinics but that distance is too far for her children to walk, and she doesn't have the money to cover the costs of the trip.