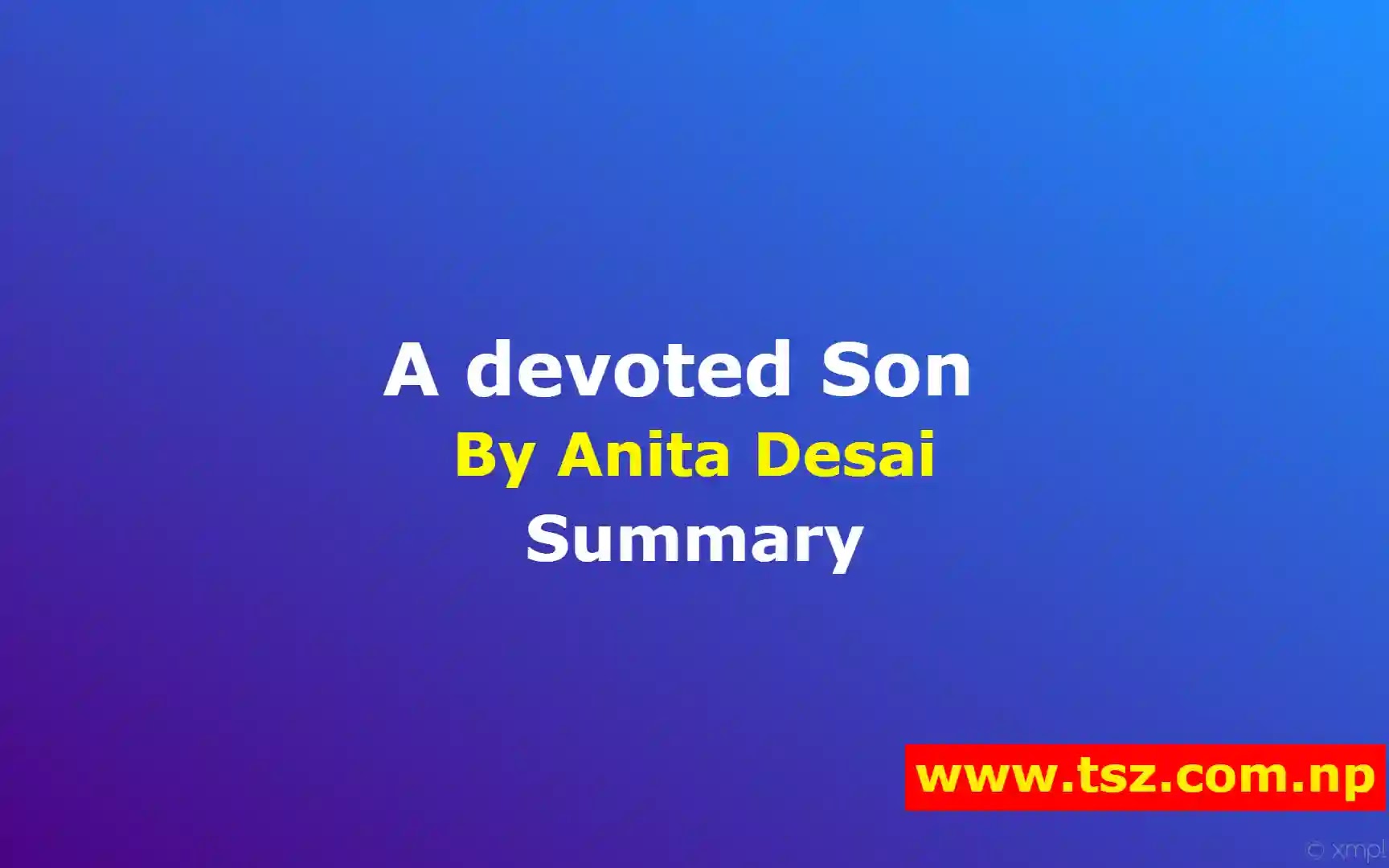 Here is only summary of this story, for exercise solution, visit:

Main Characters in this story

Plot Summary or Outline of the Story

Summary of the Story

A Devoted Son is a realistic narrative set in an Indian town about a middle-class Indian family. The tale demonstrates how parents value their children's ambition and how a son should honor his parents' wishes. Rakesh, a loyal son, is mentioned in the story title, and the storyline focuses on him. He is from a rural Indian village. Varma's father used to be a salesperson for vegetable. So, he did not get any education. So, he has high ambitions towards his son Rakesh.

The narrative begins with the good news that he passed his medical test, followed by a family gathering with the neighbors. He leaves when he is offered the opportunity to continue his education in the United States. Mr. Varma is proud of his son since he did well in the exam. Although some people say that he will forget about his past and become egoistic.

Despite being offered a job at one of America's most prominent hospitals, Rakesh declines because he wants to help his parents and his nation. Rakesh enjoys his time in America, but his family comes first. He still longs to return to his homeland. When he gets enough experience and money, he returns to his hometown and starts a clinic shop. His parents were dissatisfied with him. They are perplexed by his wish to return home and discard what he has accomplished.

Rakesh returns from the United States and marries a low-educated woman from the rural South. There is fairly strong evidence of a familial feud. Unfortunately, his mother passes away, and as a consequence, his father suffers from severe depression.

Rakesh is unable to dedicate enough time to his father now that he has his own family. Soon later, his father becomes very ill. He tells his wife Veena to provide him with medicine and food at the proper times in order to care for his ill father. Despite Rakesh's restriction, his father tries to bribe Rakesh's kid with sweets. Rakesh is worried about his son's untrustworthiness. His father bemoans his inability to eat enough and eat according to his desires. Their relationship deteriorates, but he develops a stronger bond with his father. At last, we are shown the Mr. Varma who is extremely worried by his son’s behaviour for not letting him eat what he wants and begs to die rather than eating the tonics and medicines that his son brings for him.

Analysis of the Story

A devoted son story by Anita Desai is believable and extremely engaging. The author has done a great job with characters, and Rakesh's character appears to lend itself well to the title. It has been stated that young children and older people have similar personalities, and this can be seen in this tale.
A impoverished Indian rural family's story is told in this story. A vegetable vendor, Mr. Varma manages his family with his oil business without any formal education. Varma always educates Rakesh, his son, so that he will become a renowned doctor, and he will have a nice existence.
Varma works hard to achieve his goal, and it comes to fruition as a result. It indicates that the dedicated children may assist their parents achieve their goal. He goes home to assist his family and community, despite being offered numerous positions at prestigious American hospitals, and the author creates a sense of gratitude towards his family and country. As a result of his studies and hard work, he is also awarded the top position in the hospital.
Rakesh's mother dies, and his father becomes sick, and the narrative takes a sharp turn. These are the natural processes that one must endure in order to live a full and meaningful existence. When it comes to being strong in these circumstances, the author may be saying that one should take on the responsibilities.
Rakesh is devoted to his parents. However, his and his father's relationship becomes strained. Generational differences are to blame for this. It's not uncommon for a dying patient to want to eat his favourite meal, and Rakesh's job as a doctor is to prevent him from doing so.

What is the Plot and Setting of this story?

After 1990, lower class families in India strive to educate their children so that they may achieve their dreams. This story is also set in the same mentioned scene.

What are the themes of this story?

The themes of A devoted son story is loyalty and responsibility, patriotism, gratitude, parent's relationship with their offsprings etc.

sweetmeat (n.): a small piece of sweet food, made of or covered in sugar

encomiums (n.): a piece of writing that praises someone or something highly

gastroenteritis (n.): a disease triggered by the infection and inflammation of the digestive system

hypocritical (adj.): characterized by behavior that contradicts what one claims to  believe or feel

Ambassador (n.): an automobile manufactured by Hindustan Motors of India, in production from 1958

prophet (n.): a person regarded as an inspired teacher

About Author of ' A devoted son' Story : Anita Desai

Anita Desai, original name Anita Mazumdar, is an Indian novelist, short story writer and the writer of children’s books. As a biracial child born to a German mother and Indian father, Desai was exposed to German, Hindi, and English language from her childhood.

She received the Sahitya Academy Award for her novel Fire on the Mountain. Her novel In Custody was adapted into a film in 1993.

She published several volumes of short stories including Games at Twilight and Other Stories (1978), Diamond Dust, and Other Stories (2000). Two of her Children’s Books The Village and the Sea (1982) and The Artist of Disappearance (2011) became popular among Indian children. 'A Devoted Son’ is extracted from her collection of stories, 'The Complete Short Stories'.