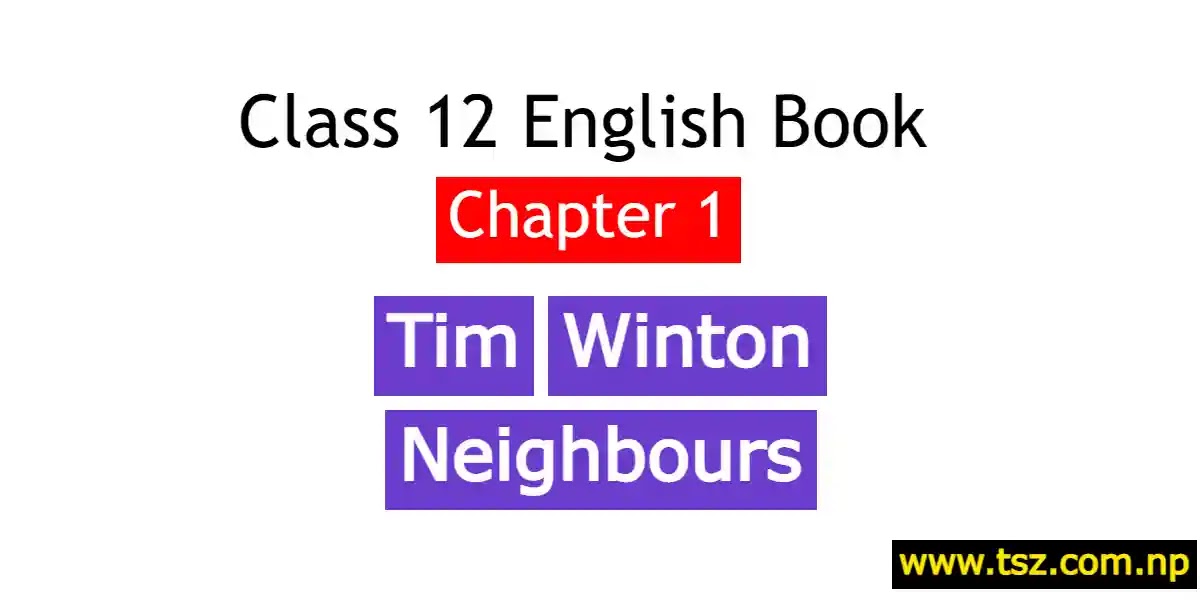 a. Describe how the young couple’s house looked like.

= Even though their home was tiny, it had the appearance of a beautiful cottage due to the high ceilings and paned windows that were on the walls. Their house was not that luxurious or of High-standard but was perfectly cosy to live a life as a normal person.

b. How did the young couple recognize their neighbours in the beginning of their arrival?

=The young couple recognized their neighbours as uncivilized and annoying people in the beginning of their arrival from various odd activities that they witnessed. People in their surrounding used to scream, quarrel, make unnecessary noises. They also lack proper sanitation. They used to complain about their dog. They used to interfere with their household activities.

All these things made them have a negative impression about their neighbourhood in the beginning of their arrival.

c. How did the neighbours assist the young couple in the kitchen garden?

= Neighbours helped them both orally and physically in their kitchen garden. Orally, they gave them some advice that was required to have proper benefits from gardening. They approached the work area and offered and advised them the ideas for spacing, hilling and mulching the vegetables they had planted. They provided them with some seeds and plants of vegetables as well.

Thus they assist the young couple in the kitchen garden.

d. Why were the people in the neighbourhood shocked at the role of the young man and his wife in their family?

= The people in the neighbours were shocked by the actions of a young couple which was new to them. They were astonished to see that the young guy stayed at home and took care of domestic chores, while his wife worked at a hospital. It was frowned upon in the neighbourhood for men to sit at home while women worked outside.

e. How did the neighbours respond when they learned about the woman’s pregnancy?

=  The neighbour's reacted to the woman's pregnancy with grace and politeness. They began smiling at the young couple all the time and showing a lot of concern for the young lady. They did all they could to help her in different ways. They gave her numerous presents, counsel, and attention in connection with her pregnancy.

Neighbours showed their joy and happiness through various activities. Some people started offering them presents, hand-knitted sweaters, gloves, caps, some women started advising them baby names, some started guessing the child whether it will be a boy or a girl.

From all these, we can infer that the people in the neighbourhood were very happy to learn about the woman's pregnancy.

f. Why did the young man begin to cry at the end of the story?

=  At the conclusion of the story, the young man cried, realizing his neighbour's concern, care, and affection. When he found people applauding for his newly born kid, he couldn't conceal his feelings. He cried with joy at his neighbours' happiness. His view of his neighbours changed. He was able to understand the concept of interpersonal interactions.

g. Why did the author not characterize the persons in the story with proper names?

= The author did not give the characters a definitive name or identity because he wanted to represent individuals from various cultures and languages living together in peace. The author wants the reader to get influenced or inspired from the story by characterizing the persons of the story without finite names.

Second reason could be, Tim may not want his readers to get too involved in the characters, rather feel the way people interact with each other in a diversified community.

a. The story depicts that linguistic and cultural barriers do not create any obstacles in human relationships. Explain with some examples from this story where the neighbours have transcended such barriers.

= In the story, language and cultural differences do not hinder human connections. In this story, their neighbours help the young couple with their kitchen garden even though they don't understand their language. Even though they don't speak Macedonian, a Macedonian family educates them to yell. Helping an old Polish man restore his chicken coop may be considered as noble. It is a fantastic illustration of a human connection when they show care, love, and respect for the young pregnant woman.

The couple's realization allows them to explore a new chapter of their life when they discover they're pregnant. They shared a culture but not a language. After a period of adaptation, the pair blended in well. The anecdote shows that language and cultural barriers do not prevent human engagement.

The young man realizes at the story's end that twentieth-century literature had not fully prepared him for real life. He was startled to realize that twentieth-century fiction and actual relationships differed significantly. He formed an opinion about migrants' lives while writing his thesis on a novel set in the 1920s. Sick of dealing with immigrants in his new area, he had almost decided to leave the area. In the end, his view of twentieth-century novels was mistaken.

It was unexpected. He was moved to tears by migrants' actions and realized the value of mankind. Human interactions are considerably more relatable than things written about in books, he realized.

A lot of unexpected things occurred in the young man's life. His neighbours showed their love and joy, he sobbed seeing such nice neighbours. All of this was possible due to their great neighbour relations. The human connection let him realize the value of living in a community.

c. A Nepali proverb says “Neighbours are the companions for the wedding procession as well as for the funeral procession.” Does this proverb apply in the story? Justify.

=  A Nepali proverb says “Neighbours are the companions for the wedding procession as well as for the funeral procession.” defines the social harmony and relationship that the people in the Nepali community have with each other.

If someone has a marriage, people go there to help with arrangements, not only to celebrate. We can say it is almost impossible to conduct such ceremonies without the help of neighbours in our society. (Unless they go to some Party Palaces or hotels for arrangement). Similarly, if something unexpected or sad happens in one family, every family in society becomes ready to share the grief.

This proverb is also applicable in this story. When they were gardening, neighbours came there to help them with various suggestions, including giving them various materials and seeds for planting different vegetables. Similarly, they also give them an idea of how they can grow more and well. This proves that Neighbours helped them when there was a time they required.

On the other hand, They are also assisted by their neighbours when they have a happy and pleasant moment. Having a baby is a good moment, where every one of their neighbours come there to celebrate and be the participant of their happiness. This implies the Nepali proverb of "Neighbours are the companions for the wedding procession as well as for the funeral procession".

= Multiculturalism is a mix of cultures. Communication is a major barrier to adjusting to new situations and building connections with people from various cultures. Because of this, I think inter-ethnic prejudice will exist and it deepens the chasm.

People don't meet because their lives are so diverse. Mostly, concepts like "humanity" and "human connections" are obsolete in such societies. This sense of diversity generates damage and discrimination in all areas. This idea has led to numerous disastrous results. This kind of thinking is harmful to our world.

In conclusion, multiculturalism has many flaws.

a. Write an essay on Celebration of Childbirth in my Community.

= The ninth day of birth (Nwaran) is a joyous celebration of a child's birth among family and community members.

The infant is named that day. It is a community event. A townspeople came to congratulate the parents and family. They also sing, dance, and consume excellent meals.

Having a baby shower before the baby is born is not our norm, thus I oppose this new trend. Other cultures' celebrations of anti-traditional conduct have influenced our society. Every year, an older relative or a member of the community blesses a child's birth. People offer presents and pleasantries.

This has aided social bonding.

b. Do the people in your community respond with similar reactions upon the pregnancy and childbirth as depicted in the story? Give a couple of examples.

=Yes, they do. People in our society are very responsive and cooperative. Not only do they respond to some neighbour's happy moments but all are ready to help all people in the community. This has helped people to strengthen their relationships.

Our culture values pregnancy and birth. This commemorative ritual includes the entire family and the neighborhood. Mothers are respected more throughout pregnancy and childbirth. She is loved and cherished.

Well-wishers from families pray for the mother's and baby's health during pregnancy. That's why I admire it. People around her regularly offer her health advice. Her family treats her well. So, she receives plenty of presents and privileges. Everyone respects and likes her.

A child's birth is a momentous affair. Everyone in the family and the whole community becomes excited when a kid is born. Guests congratulate the parents on the baby's first cry. They all rejoice for the new-born baby. The whole family welcomes and cares for the new mother and the baby.