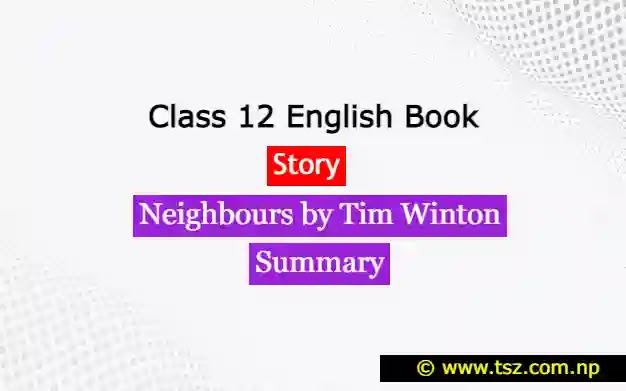 Tim Winton's "Neighbours" is a short story about a young couple who just got married and moved. In their new place, they see a lot of European migrants. Initially, they are disgusted by what their neighbours do. A Macedonian family next door and a Polish widower next door make them angry.

They attempt to avoid them. Their new neighbours do things that are a little weird and a little dirty, which makes them a little uneasy at first. People in the next door don't like that their dog is outside or that the young man stays inside while his wife works outside.

When the young woman gets pregnant, her neighbours start cheering and giving her help, gifts, and advice right away. Everyone in the neighbourhood is having a good time. The young couple hasn't been used to it. He is shocked when his neighbours welcome a new baby boy. Finally, the young man weeps as his neighbours cheer for his baby's birth. He realises that the view of migrants is wrong.

The story shows that people from different countries can live together happily even though they speak different languages, have different customs, and live different lives. Human relationships are more important than anything else.

Timothy John Winton, best known by his pen name Tim Winton, is an Australian novelist, children's book author, non-fiction author, and short story writer who lives in Melbourne, Australia. A story of him Neighbours, will be discussed in this article since it is the first chapter of grade 12 English Book- Literature Section.

Transitions and how they allow for changes into new phases of life are examined in Tim Winton's short story - Neighbours.

The couple was dissatisfied with the conditions in which they found themselves. However, as they get more acclimated to their new surroundings, the young couple starts to develop a positive attitude about their neighbours and realizes that they are not all bad people.

They understand that their only assets are their neighbours, and that establishing amicable relationships with them may prove to be a smart choice. They realize that they can be friends and help each other out in their everyday lives, thus making everyone in their neighbourhood happy and content

The purpose of this short story is to communicate the message of the importance of creating a peaceful atmosphere with one's neighbours. Prior to relocating to that location, the young couple lived in an outlying residential neighbourhood.

First and foremost, they are sojourners who do not communicate. In the meanwhile, "the young guy" stays at home to finish off his thesis on a nineteenth-century book. The "young woman" is employed as a medical assistant at a hospital. Their life, on the other hand, change in the autumn when they begin to produce vegetables.

Some Interesting things of this story

The story illustrates how immigrants may make a positive contribution to Australia's social structure. Because of their strong feeling of belonging, the couple is able to see that intolerance, prejudice, and discrimination are all the result of a lack of information.

The story shows how many people from many different countries may live peacefully together despite having quite different lives.

To conclude, we readers have different experiences with Tim Winton's "Neighbours" depending on how we understand and interact with the text. You may make a difference by contributing to a varied reading experience in a variety of ways.

The significance of the characters in the book, their cultural roots, our own lives, morality, and values, and the importance of the text's characters are all instances of this.

Moreton Bay (n.): a bay located on the eastern coast of Australia

vernix (n.): a greasy deposit covering the skin of a baby at birth