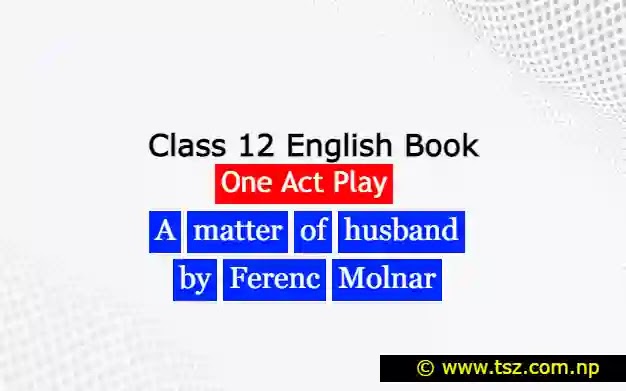 Here is the Exercise Questions Answers of A Matter of Husbands by Ferenc Molnar class 12 English!

a. What favour does Earnest Young Woman ask from The Famous Actress?

b. What, according to The Earnest Young Woman, are the indications that her husband has fallen in love with a Famous Actress?

According to The Earnest Young Woman, the indications that her husband has fallen in love with a Famous Actress are the love letter written by her husband to her and flowers that were sent to her.

c. Is Earnest Young Woman convinced by the argument of Famous Actress? How?

d. Where is the Earnest Young Woman's husband hiding himself as they are talking to him?

The Earnest Young Woman's husband is hiding in the bedroom of the famous Actress. He comes towards the play's ending when the Famous Actress calls him from her bedroom.

e. When do you feel that a Famous Actress is really good at acting?

I think she's incredibly skilled at acting. Famous Actress tells Earnest Young Woman that her husband plays a game on her to pique her interest so she'll transform herself and do whatever it takes to please him. When Alfred is called out by her, I was stunned.

f. How do we come to know that a Famous Actress and the husband of Earnest Young Woman are in love?

G. Write down the plot of the play in a paragraph.

After hearing this, the actress blushes and continues to deny receiving any flowers or notes from him. In order to make Earnest Young Woman believe that she and her husband had a misunderstanding, she now claims that something strange happened. The Earnest Young Woman convinces Earnest Young Woman that her husband is playing with her in an attempt to make her jealous and gain her attention and love. Then, the innocent young lady realizes her mistake and begs for her apology. Alfred is called from her bedroom by the famous actress after the eager young lady exits the stage.

a. Sketch the character of a Famous Actress.

The famous actress is a cunning and clever woman. Every woman wishes she were as attractive and well-known as the Famous Actress. She seems innocent and harmless on the surface, but she is a terrible and evil person on the inside. Her deception may be apparent in the way she tells a lady that her spouse is cheating on her with someone else. To top it all off, her husband Alfred was found at her home, proving that she has immoral and unethical relations with other men.

b. Shed light on the difference between an ordinary woman and an actress.

c. According to Famous Actress, men associated with theatre use the theatre actresses to make their estranged wives jealous so as to woo them back. Do you agree with her argument? Why? Why not?

No, I don’t think the logic of the Famous Actress that the men associated with theatre use the theatre actresses to make their estranged wives jealous so as to woo them back is true. The wives of men who work in theater tend to be ordinary, gullible, and prone to being misled by a clever ruse. Alfred also could have an affair with that woman trying to win back her affections by making her jealous, but they were having a serious and immoral relation as we saw in the play. It is not the case that he uses the famous actress to provoke jealousy in his wives.

d. How does a Famous Actress make a fool of Earnest Young Woman?

An Earnest Young Wife gets fooled by the Famous Actress, who claims that she and her husband may be in a miscommunication. She convinces Earnest Young Woman that her husband has been toying with her in order to make her jealous and reclaim her love. As a result, Earnest Young sees her error and apologizes to the offended party.

e. The conversation between the two women takes place on the stage of the theatre. What role does the theatre house as a part of setting play in A Matter for Husband.

The theatre house provided the suitable environment for the women to express their thoughts freely. If it had been opened, it would have been unreasonable to share such issues. But, the context of private rooms has played as the catalyst for their open conversation.

f. What do you think about the ending of the play?

I think this play, 'A Matter of Husbands,' has the most stunning, illusive and twisty ending.The play's last scene is both touching and ironic. I concluded that skilful people usually take advantage of innocent people because they are typically honest in their hearts, but innocent people constantly suffer.

In the play, the actress tells a young lady that while her husband claims to love her, he doesn't care about her at all. Their assurances to her that they are not involved in any extramarital affairs are all fabricated. But, the young lady is overjoyed towards the end of the play when she thinks that she got her husband back. There's no dissatisfaction among the actors. The young woman's husband and the actress's cohabit in peace. Both the actress and the speaker are happy. They've gotten over the obstacle that stood between them.

In other words, I conclude from the play's ending that it was a happy ending.

a. Write a paragraph describing your favourite actor/actress.

Tom Cruise is one of my favorite actors. If I had the opportunity to create the best actor from the ground up, I would make Tom Cruise. At the same time, he has a wide range of skills and is always enthusiastic about what he's doing. He has done many films like Mission: Impossible, The Mummy, Top Gun etc. His acting ranges from subtlety to over-the-topness, and he's capable of doing it all. He's a riot as a stand-up comic. In his role as an actor, he's always captivating. Moreover, he is the best action star in the industry. A movie star who works hard, he is at the top of my list of favorite actors.

If you want to understand this play in detail, then for written summary, read:

Summary of A Matter of Husbands by Ferenc Molnar

Nepali Explanation of all questions with short summary: